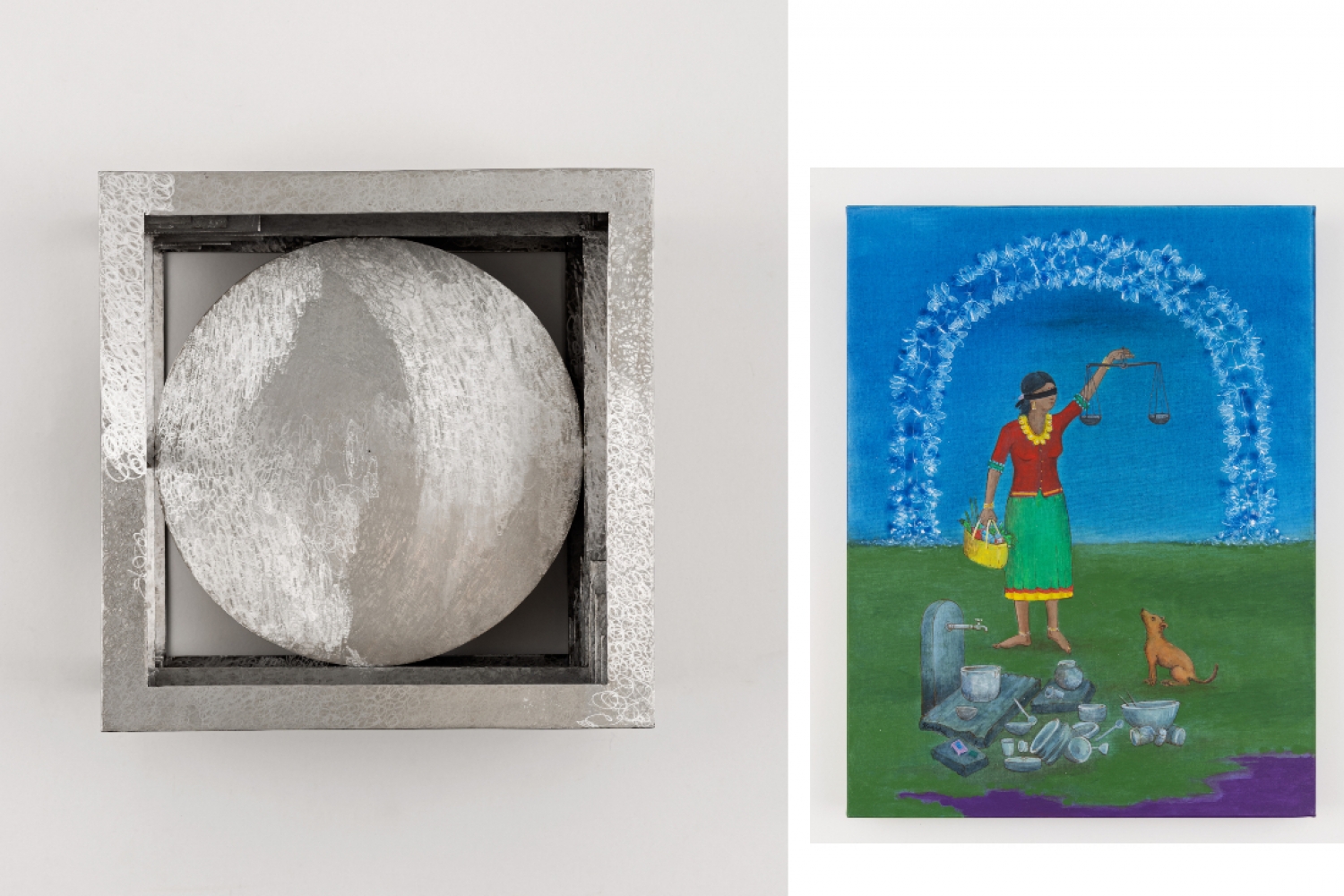 Last year, the global art world came to a sudden pause in the face of a worldwide pandemic. But not everything stopped. While some artists went silent, and some were unable to access their studios, others sat by a desk and drew every day; and some were productive like never before. Each artist was at their own rhythm, and at the center of various emotions, I, as a gallerist, was the urge to maintain equanimity. My efforts to balance the scale, giving counsel to both: the buoyant and the emotionally fragile come together today as we tell the story through each of our artists' voices.

In context to my own sense of being/displacement, receiving N S Harsha's work made especially for the fair, summed up my feelings with a sweet irony. He painted Themis – the blind Greek Goddess of wisdom and good counsel -  as the local Mysore schoolgirl, playfully dressed. In place of her sword was a grocery bag, and before her a pile of kitchen vessels. The Goddess’s new avatar is the artist's attempt to amplify the voice of the countless unseen women caught in the domestic trap of contemporary society.

Atul Dodiya befriended a sketchbook; daily composing drawings in response to the events he learned through the news. The set of 6 works he presents are a selection from these everyday sketches translated onto canvas, enveloped with classic, Atul-esque figures in richly-layered oil paint; raw, dense and rich in color. The emotionally-charged scenes convey the horrors of what he encountered during the pandemic, and are deeply etched in the artist’s psyche.

Mithu Sen was silent for majority of the pandemic. Only recently she made a return to the purity of white paper and pricked at it relentlessly; painfully albeit creating beauty through pinpricks. How does one erase these moments of turmoil? Perhaps by revisiting places, objects, things that assume 'happy-making?' 'Until you unhome' is a set of uncolored, uncontroversial, and virtuous happy-prick-drawings that serve as a disclaimer and an exercise in perceiving what the images are and are not.

The mind has been on a see-saw in this past year and a half. There is the safe refuge of home and family; yet, on restless days, one craves the world outside. For Anju Dodiya, museum memories added to home-bound ruminations. There is furniture, domestic and reassuring, as in the Lichtenstein painting. There are the knotted-up emotions that mimic the playful Rei Kawakubo, or Maria Lassnig’s theatre, that hovers like a nightmare for the quarantined soul! Pacing up and down, still here, the room is a nomad!

In continuation with his abstract gestures, Jitish Kallat seems to crystallize and acquire perceptible form only to dissolve back into abstraction; celestial orbits, geographical coordinate systems, botanical, biological and topographical evocations that begin to reveal the signatures of growth, evolution and entropy.

Away from his studio and welding tools, Ritesh Meshram continued working at home. He introduced paper into his sculptural practice; composing actual size structures that he now realised in metal. Continuing his signature use of motifs relating to social concerns of the economic divide in India, he constructed a stepwell, a protagonist of ancient Hindu architecture that served a source of water during periods of draught; and the form of a tent to invoke shelter.

Rashid Rana furthered his interested in dualities— those of space, time, tradition, and culture. In his Transliteration series, he uses historical iconography as his building blocks, such as Napolean Crossing the Alps painted by Jacques-Louis David of the Neoclassical period. Initially commissioned by the King of France, the original equestrian portrait depicts Napolean and his army crossing the Alps through the Great St Bernard Pass in the 1800s. By reconstructing, manipulating and splicing the image, Rana gives it a new significance; a closer look suggests an inherent contradiction, or the notion of nationalism and overt patriotism, the subject of many paintings by David.