As the pandemic hit us in the beginning of this year, and the lockdown was announced countrywide to tackle it, Parul Sharma sought an emotional artistic opportunity amidst the grim reality. As the capital of the country came to a halt, Parul used her lens to capture the stillness and silence that now imbued a city, which is known to be one of the busiest and perhaps noisiest across the world. As she shot the unfamiliar nuances of spots in the city she was the most familiar with, the opportunity of putting it all together in a coffee table photobook was not far away, and Roli Books has now published her work in the unique book, titled, Dialects of Silence. The book is printed on synthetic paper that has been provided by Cosmo Films and the proceeds from the book will go to the Cosmo Foundation, philanthropic arm of the company that works towards imparting and strengthening education at the grassroots level. We connected with Parul to know more about her practice and the book.

Tell us a little bit about yourself and how you were led towards photography?
I was born in Delhi and spent all my life here, except for eight years in Germany where I worked for Deutsche Welle. There I also worked with an art house that specialised in post-war modernism, as well as the Bauhaus School of Design. Prior to pursuing photography as a full time vocation and profession, I worked for 14 years as head of communication for the Star TV group in India. Because I travelled a lot, especially to Mumbai, I developed a passion to photograph Mumbai’s Art Deco architecture dotting many parts of that great city. At some point in 2016, I realised I wanted to pursue photography focussed on architectural design, form, and the geometry of urban spaces. This led to me leaving Star in April 2017, and doing my debut exhibition, Parulscape, at Bikaner House in July 2017. I have subsequently done a series that has been exhibited, on Yamuna River Pollution, and the forgotten step wells of Rajasthan. In December 2019, the leading public museum of Florence, Marino Marini, hosted my works on Naga Sadhus and transgenders in a three week solo exhibition called Mystico India. The images were shot in a 24 hour period on the banks of the rivers in Allahabad, at last year’s Ardh Kumbh Mela.

What informs and inspires your practice as a photographer?
Very simply, two precepts. One, somewhere out there is that perfect frame I need to capture, which is exciting and measures a city’s heartbeat and pulse through its structures and streets. Two, every frame should be a narrative of the time we live in, some  good, and some bad.

If you could, how would you define your artistic sensibility?
Black and white. It is how I have tried to live my life, and it is how I want to define my sensibility in art.

How was Dialects of Silence conceived?
The lockdown was declared on March 23 in Delhi. I hit the streets in my car, driving myself on April 4 to see what was happening to and in the city I live in. My father came from New Delhi and my mother from Old Delhi. It was therefore natural that I went to the places I knew most and shot my images there. Somewhere in June, the idea of doing a book on the lockdown in Delhi came up in a conversation with Pramod Kapur of Roli Books and the photographs in Dialects of Silence are also curated by him. 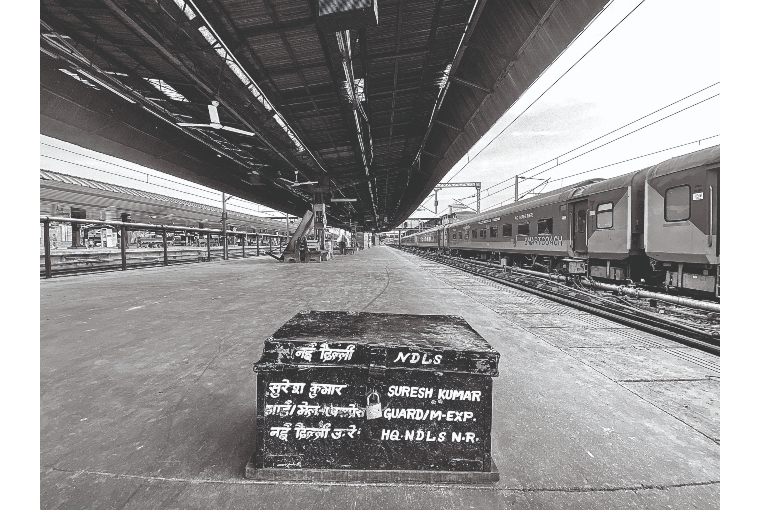 Could you take us through your creative process behind the book, the shooting and selection of images?
Dialects of Silence is divided in three sections:

The first section covers the months of April and early May, when the city was bereft of movement on the streets. Everyone cowered indoors, fearful of the virus raging outside. Pollution disappeared. Dogs, monkeys, and birds captured lost territories. The skies were a constant profusion of the clouded energy you see in Jackson Pollock’s works. The architecture contained in the designs of early Hindu Kingdoms, the Mughal era, the Colonial period, the Lutyens sections, and the post 50s forms of modern Indian architects, were pristinely resplendent.

The second section of the book consists of photos taken during mid May and June, what I call the locomotive moments that almost crushed my soul. Migrants left abandoned to the city’s apathy, dead bodies being delivered like Amazon packages to Nigambodh Crematorium, and the Muslim Burial Ground, and the Christian Cemetry in West Delhi, and the incredible bravery of Doctors at AIIMS, Safdarjung Hospital, and at other hospitals in the city, battling the virus 24 by 7, saving lives, and sometimes losing lives. These are images that are going to torment me for a long time. There was tragedy all around and there was also a slow resurgence of the city’s will to fight back.

The third section was in effect a closing narrative to a story line that had not yet fully ended. It was the phased unlocking of the city, as people went back to work, as markets opened up, and as parks drew flaneurs and walkers, as temples and mosques brought in thousands of devotees back to their hallowed grounds, and as masks and cycling became the new symbols of style.

What kind of challenges did you face with the creation of this book?
The main challenge was to work online with the Curator, Pramod Kapur, who was in Mussoorie, Roli’s design wizard, Sneha who was working from her home, the EIH Printing Press in Manesar, and to get Dialects of Silence curated, designed, and printed in a period of literally the four weeks of August. It worked and the book hit the bookstores, and Amazon and Flipkart on September 2.

What do you hope people take away when they view this book?
The timeless beauty of Delhi, the City of Hope. The inherent kindness and resilience of its people. The lessons of caring much more for the migrants who built and build  our city, and to recognise that a virus can only be defeated if we not only have the best doctors as we do, but if we also build more and more health infrastructure for the capital.

How have you been coping with the pandemic and what will be the new normal for you post it?
I have never thought of how I coped with the lockdown. I worked every day. I shot over 10,000 images in three months. The new normal for me is to work on my other projects that got delayed because of the pandemic.

Lastly, what next?
Roli Books has commissioned me to do a book on the Art Deco area of Mumbai’s Colaba District. I hope to complete that by the end of this year.