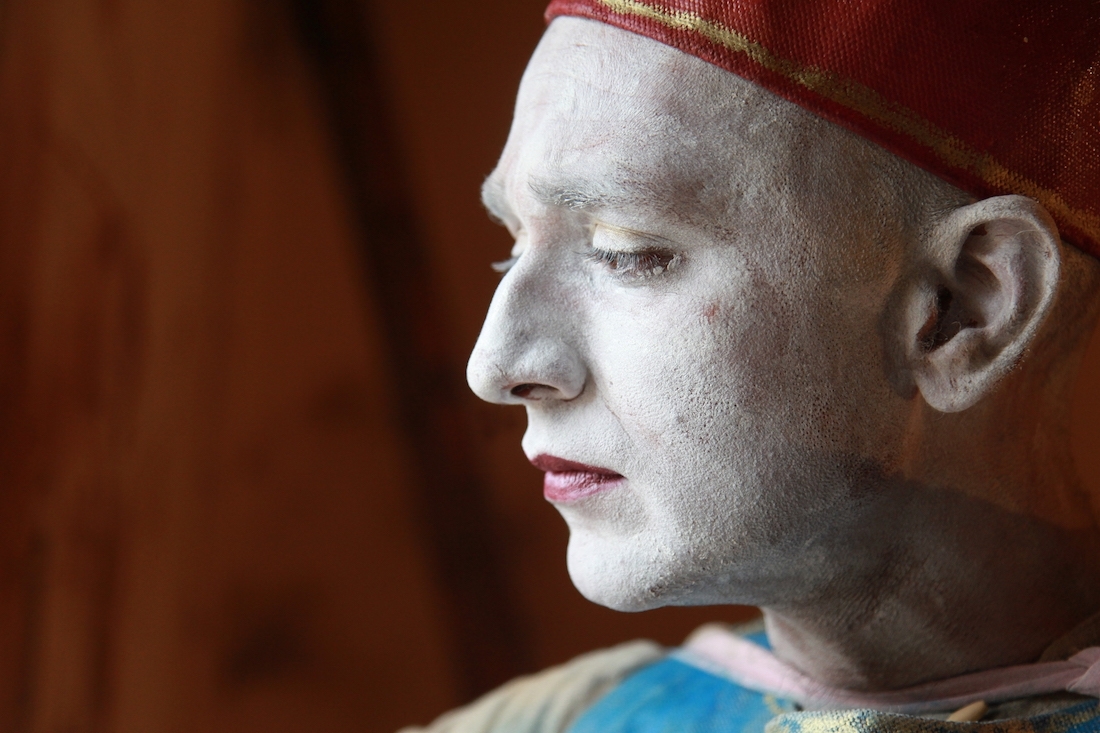 To attempt an introduction to Nikhil Chopra is futile – he is devoid of definitions and detached from everything he has ever been. In his new nine-day act at the Metropolitan Museum of Art, New York, he is set to create history - this is the first time in 150 years of the Met that a contemporary artist has made a long durational performance art work in the museum.

I let him take the stage…

Would you call yourself a nomad?
Professor Erika Fischer-Lichte, at Freie Universität Berlin and author of Transformative Power of Performance, said to me when I spoke about my roots in Kashmir, “Trees have roots, humans have legs”. And that’s what we do with our legs, we move. I have been in Goa now for seven years and this is the longest I have stayed in one place continuously in my life.  My father had a bank job and was transferred every three years. I grew up all over India and the Middle East. My adult life has been spent between Mumbai, Baltimore, Columbus, New York, Berlin and Goa. Yes I am a nomad. And now my art is making me a traveller. With my base in Goa, I am moving all the time. And each place and person I have visited and met has carved itself into my personality. I am at this very moment, the sum total of all my experiences. My scars and marks tell my story.

You assume the role for Skies, Lands and Waters at The Met. Can you define the exhibit in your own words?
Skies, Lands and Waters is the title of the nine-day performance art installation commissioned by the Metropolitan Museum of Art, New York, fondly known as the Met. The Met on Fifth Avenue epitomizes the definition of a museum; its collection of objects span 20,000 years of human culture across six continents. It is the second most visited museum in the world with a staggering 7 million visitors a year.

I am a performance artist and I am also a painter. While inside the Museum my time will be spent making a large drawing measuring 58x20 feet on cotton fabric. I am stretching, or rather deconstructing a landscape painting and its make up, dissecting its very elements into sky, land and water, and smearing them across the three locations inside the museum over a period of eight days continuously.

I want to quite literally migrate from one end of the museum to the other, traverse time and space like a nomad collecting narratives, making the drawing as way to notate distance, between one place and the other and between one moment and the other.

I will begin outside the museum. My first action is to move into the museum through the main Fifth Avenue entrance, piece-by-piece, box-by-box. I will gather my things first in the Great Hall, this is where everyone buys tickets and coat checks. From here I will move slowly to the platform in front of the Temple of Dendur, an Ancient Egyptian Temple, dismantled, shipped to the US and reconstructed at the Met in the 1960s. After two full days here of drawing the sky, I will dismantle my set and move to the threshold-way between the galleries that house Arts from Oceania and Modern and Contemporary Art, moving one box at a time, taking a break in the Medieval Hall between to the two points. In the threshold-way, against the wall, I will draw the image of rocks and land. I will end up at the Lehman Courtyard with an Italian Renaissance fountain for the last act of the performance. It is by the exhibition titled In Praise of Painting, an exhibition of Dutch Masters, that my painting’s last element, namely water, will get drawn on the canvas. The trickling fountain will help evoke this.

In each location the configuration and orientation of the cotton canvas will change, as will the persona that I play. As the performance moves and migrates the various transformations will be marked and articulated in the performance.

What inspired the act?
In this milieu of art and artifacts that stand the test of time, I am compelled to think about my body along with the thousands of bodies that come through the museum, as consumers of and then the containers of the objects we look at; at what they evoke in the present as well as what they stood for in the past.

I use performance as a means to unpack the self. I am looking for the common thread that runs through all of us; hunger, thirst, love, lust, greed, anger, joy, pain, passion, sorrow and fear. We are all physically connected to each other by land and water, living out our lives and our rainbow of emotions under one sky.

From New York to Kashmir where my family comes from, to Goa where I live now, between one home and another, in my drawings, I continue to work with the mountains, the sea and the skies that connect them. In my art I am in search of the sublime. Like a hopeless romantic, the melancholia and irony in my performance reflect the mess of the world we as humans continue to make. I use drawings as a means of confronting the fragility of the wilderness and our place on the planet. Performance is a way to bring to attention the process of making a drawing as an act that is both personal and political. The labour and concentration required to make a thorough drawing is part of the spectacle.

What research went into creating this work and the characters therein?
As a live artist, my work is often reacting to a site. Visiting a place, in this case repeatedly, has allowed for a deeper understanding of the context within which the performance will be carried out. During my visits to the Met I spent time at the museum in its various galleries, in spaces, among objects, in spaces as objects and amongst thousands of people. On a rainy day the Met often felt more like a public space with a utility like Grand Central train station. How the thousands of people negotiate through the museum, what are the favorite sites and object and what are the least visited galleries, was an observation that determined where in the museum I would perform.

How has The Met been supportive and how did the collaboration shape up?
The museum has been very supportive. Every department has expressed their curiosity and enthusiasm for the project. So far it has been seamless.

My link to the Met is through curator Shanay Jhaveri. I have known Shanay since 2010, when he visited a performance exhibition I was presenting titled Yog Raj Chitrakar: Memory Drawing X at the Bhaudaji Lad Museum in Mumbai with Chatterjee & Lal. Shanay was in his early 20s when he wrote an essay in reaction to his observation of the piece. This text moved me deeply. Shanay’s read and understanding of the work was mature and articulate, he got it! The text became the lead essay for a publication we put out that very year. Since then there has been a mutual interest in each other’s development. As he takes on the role of curator for Modern and Contemporary at the Metropolitan Museum of Art, it becomes both natural and urgent for him to invite me to make a new performance work for the museum, to challenge the workings of a major public institution while being inspired by one of the most diverse collections of art in the world.

This project brings together the departments of Modern and Contemporary and Live Art. Limor Tomer of Live Arts is a stellar curator and producer. So the collaborations have happened on many levels. This too is another first: to have different departments in an enormous institute come together to make a contemporary-performance-drawing-installation possible.

How challenging is it to keep up an act for nine days?
It is as challenging as a nine-days mountain trek. It has its highs and lows. Time is an important element in my practice. I use time like material. In order to immerse myself in my performance I must separate myself from my daily familiar self.  If I am to feel the transformative power of my work I need to spend time with it. The cycle of day and night, from sleep to awake, from hunger, thirst and fatigue to rejuvenation, I go through many emotions, thoughts and changes. At the Met I want to be the refrigerated object encased in the museum for eight days. This will transform me and hopefully a few people around me too.