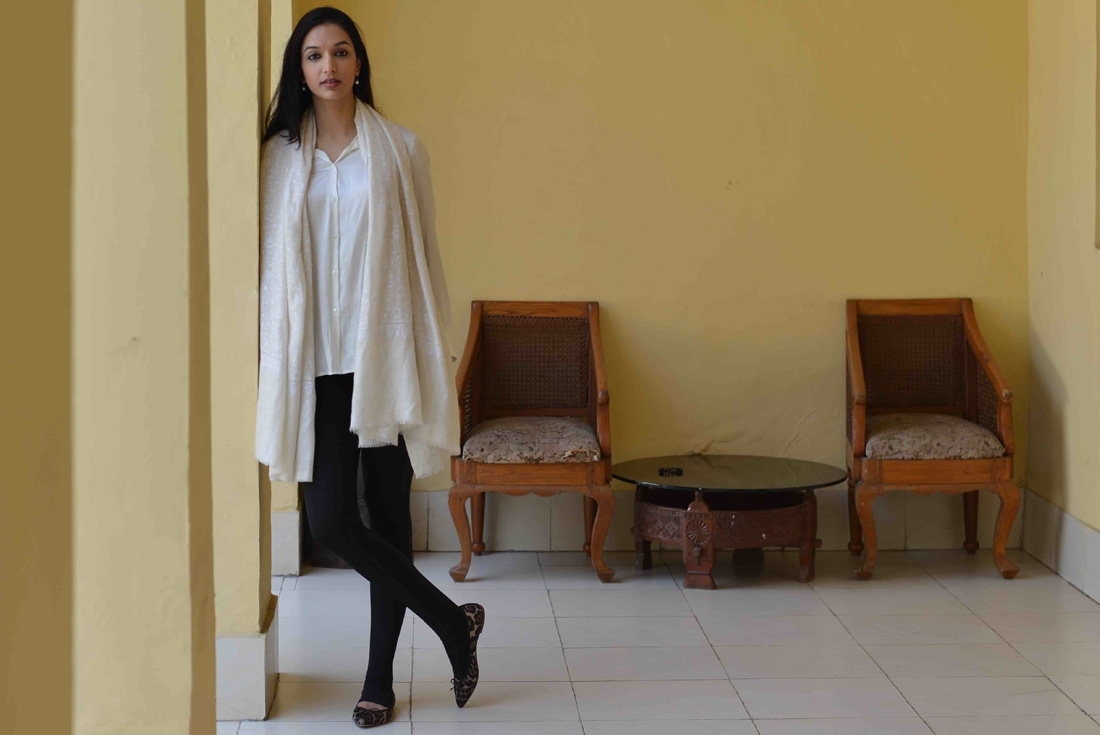 Award-winning Journalist. Bestselling Writer. Master of Yoga. Ira Trivedi is probably one of the most interesting writers from India. Even though she earned an MBA from Columbia Business School, her love for writing took centrestage and each book she has written has left people intrigued and enraptured. She was all of 20 when she published her first book of fiction, and ever since has explored various subjects and diverse mediums, some true and hard-hitting while some, insightful and entertaining. After over a decade, she is back with her most cherished piece of writing Nikhil and Riya—a beautiful, poignant love story that leaves you celebrating life and death.

I met her on a sunny afternoon on a cold winter day. We sat in her garden sipping mint tea while her dogs listened quietly as we discussed her latest offering, her love for yoga, her most lovable character, Om the Yoga Dog and her love for writing…

What inspired you to write Nikhil and Riya?
I wrote the first draft of this book about five years ago. The entire book was written from Riya's perspective. It was from the perspective of a girl who was going to die in 30 days. And I think, this was also when I was really beginning my own spiritual journey of sorts, and I began questioning a lot of things in the multiverse. Questions like what is a soul? It was a journey where I was beginning to think about life beyond just our physical bodies. When I was doing that, the next question that came up was, what happens to us after we die? That's when I started reading a lot of text. If you read the Tibetan or the Egyptian Book of the Dead, or in fact if you even read the Bhagavatam you can see a lot of that influencing the original manuscript. I brought in very little elements of that. For example, when Riya is dying, I brought in subtle influences from Tibetan philosophy. But then, for whatever reason—this is very unlike me—I shelved that book. Somehow, I wasn't sure why I wrote it. It was a sort of an expression of my own exploration, but then I put it away completely. Several years later, after I wrote India in Love, it had been a while and I knew I had to write again. I didn't want to write non-fiction just then and so I decided I wanted to write Nikhil and Riya but I wanted to write it from the point of view of Nikhil, because Riya has this Zen approach to life and death, but Nikhil doesn't have that. Nikhil is more realistic. I wanted to give it a real world. I went to a residency school myself, so I sort of went back to that world and created little things that make up the tiny details. The setting of the school was in a hill station. I wanted to give it a perspective of when we're very young because that's when we feel so keenly about love. Riya was a sixteen-year-old who was about to die, and she allowed me to explore death from a young person's perspective who did not have as much attachment. The older you are the more attachments you develop. So I wanted to see what it would feel like when you're younger and you're not worried about death; you're not scared of it. What happens if you're not scared of death and you approach it as something that is interesting? At that young an age, is it possible to think of it like that?

How did the book change from Riya's perspective to Nikhil's perspective? Is Riya and Nikhil totally different to Nikhil and Riya?
Not really. Riya was still there and Nikhil was in the book, but he was there as someone who loved her. But the book was her thought process. It was completely from her perspective, so she didn't have any of Nikhil's issues—of dealing with school or the prefects. Riya finds out, she says that's it and then she's at home. She disconnects from the world except from her family. She has a complete family in the book and then there's Nikhil. But none of the school politics is happening in the background, because she's not a part of it. If you're a girl who has left school and only has only 30 days to live, I'm not sure how much you'd be thinking about the teachers, the prefects and school— maybe not. Nikhil still has to deal with it, because he's very much a part of it.

Whose story is it—Nikhil or Riya’s?
I think Riya's quite admirable. Her attitude towards death is quite nice but you have to understand that the book is from Nikhil's perspective. Nikhil adulates her. For Nikhil, there's no wrong in Riya. But there are wrongs in her character, we as readers see them. We see these blatant fundamental flaws, like she's selfish. But in Nikhil's mind, there can be nothing wrong with Riya. Nikhil is the protagonist and Riya is like his muse. But at the same time it is his story.

You write both fiction and non-fiction. Where do you feel you belong more?
I think I'm a better non-fiction writer. I have actually won prizes for my journalism. I think the time taken to write India in Love was an accumulation of all the four years, I find both mediums equally engaging however fiction is closer to my heart, I enjoy it more. But I feel like as a craft, I'm stronger with non-fiction.

How have you evolved as a writer – considering your first book was published when you were all of 20?
I have realised, as a writer you really need to work on your craft, you need to educate yourself and as I didn’t really go to writing school therefore I feel that’s even more important. In college while studying Economics I realised I could write. Even though I was not writing stories but papers, I understood that writing is what I want to do. The shift happened very naturally but I realised that whatever you do it requires discipline, hard work and educating yourself constantly. I veered more towards non-fiction and journalism as I feel as a writer my strength’s and craft is stronger in that genre. Having said that I love writing fiction as I feel there is more heart in it.

Can you tell me a little about how Yoga became such an important aspect of your life and how has it seeped into your life?
There came a point in my life where I was looking and searching for existential questions. I had just moved back after finishing my education. At the time I had a really glamorous job where I was working with a Private Jet Company and it literally was the jet-setting life. At the pinnacle of that job I asked myself that was I really where I wanted to be? Is there more meaning to what I should be doing as a 22 and because I had already written a book and I enjoyed the process therefore decided to take that on completely.

At the same time I found myself on some kind of spiritual journey where I was looking for answers and I found my way to the Sivananda Vedanta Yoga Centre in a very fruitions way and started looking at Yoga from a 360-degree perspective. I think the yogic life helped me understand the importance of Yoga. For me Yoga has always been a way to give back. I began this NGO Namami Yoga Foundation, its very small and it teaches yoga to underprivileged kids. We have volunteers who go to institutions and schools and teach kids yoga.

My passion for yoga, my love for animals and teaching kids has also led to Om the Yoga Dog, the book covers asanas and mindfulness practices for children. The book introduces the characters of Om the yoga dog, Prana the frog and Moksha the meditating elephant.

I only work on one book at a time. So while I was writing Nikhil and Riya I wasn't concentrating on anything else but before I started the book, I'd already developed my next non-fiction idea. So I will work on that next year, once the yoga book is done. I have a bunch of children's books out as well. For me, its all very properly segmented. For example, I'm working on the yoga book which will be done by February. February to March I'll work on the next children's book that'll be done by March. So I move from book to book.

Do you think books are dying?
I don’t think books are dying. I think stories are more alive than ever before because they’re so many more new mediums whether it be television, YouTube etc. So I think stories have a bigger chance forever to be told but books per say may or may not be the best and only medium anymore. And I think you need to understand that as a writer yourself. Even though we are all wedded to our books, we need to be open to change. Like Art is Art in whichever form you view it - same way stories are stories in whichever form you read them.

What's next?
There is a book of non-fiction in the works, which is a kind of follow up of India in Love. But the immediate next book I'm working on is a yoga book. It’s a yoga manual for adults and is called The 10-minute Yoga Solution. It’s about doing ten minutes of yoga a day. It comes out on June 21st, National Yoga Day. There is a picture book of the Om series that will be out in Feb 2017. In April there will be a TV show that I have written called Shaadi Vaddi Itvaadi. So a lot of ground work was done in 2016 and now we just have to see how it all pans out in 2017.

In conversation with the South Korean monk and teacher, who is also the writer of two bestselling books about living slowly and appreciating imperfection.