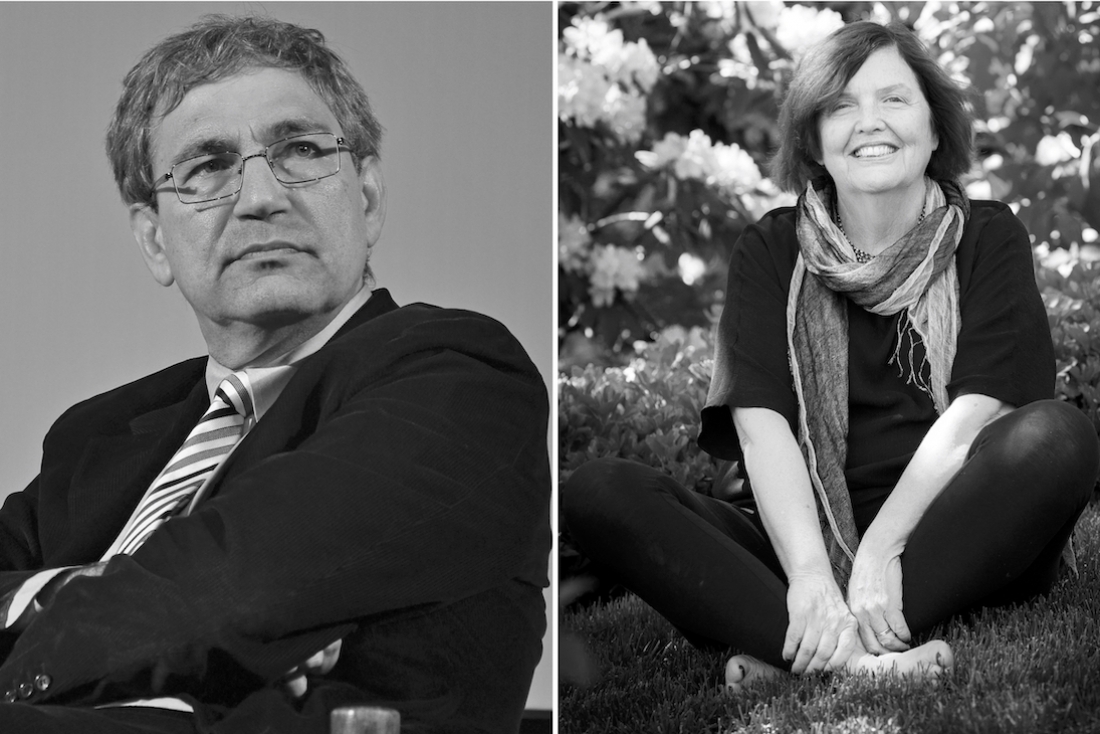 The Writer and The Translator Orhan Pamuk + Maureen Freely

Orhan Pamuk’s books have sold millions of copies around the world and have been translated in 50 languages, making him one of the most widely read and respected writers in the international arena. Of the many highly acclaimed novels, all of which originally written in Turkish, The White Castle, The Black Book, The New Life, My Name is Red, which won the IMPAC Award in 2003, Snow, Istanbul - Memories of a City, Other Colours and The Museum of Innocence are all available in English. His new book, Orange, will be out later this year.

We share excerpts from our conversation with the distinguished novelist, memoirist, Professor of Comparative Literature at Columbia University, Nobel Prize winner; and Maureen Freely, who has translated many of his titles in English over the years.

What exactly did you set out to explore in the lead essay of The Naïve and The Sentimental Novelist. You say a reader acquires a second life through a novel. It’s the relationship, which the novel triggers off in the mind of the reader. The protagonist’s reality becomes ours. What did reading novels do to you as a young man?
I do not read as many novels now as I did in my youth. Between the ages of 17 to 30, I read to form myself, to shape my spirit and to make myself – to form a new world view. These books influenced me not necessarily in a literary way. Dostoevsky taught me something about humanity. Through the Norton lectures I explored how the art of a novel operates on us. In order to introduce the subject I simply outlined what happens to us when we read novels. In The Naïve and The Sentimental Novelist, I argued that our minds are capable of entertaining, without much trouble, conflicting ideas, way more than a mind from the 19th century. We make many alterations as we read novels. We follow the plot. We look at the realistic content of the story. We ask ourselves if the author has experienced what has been written or has he or she imagined it. We convert words to images. Reading a novel is reading words and imagining them in our minds. But each picture, for each reader is different because we all have different memories, and different experiences. We also pass ethical judgment. There are many other things that we do when we read novels but these are the essential things.

The naïve writers abandon themselves to nature, in all its serenity whereas the sentimental novelist is the reflective writer. How does this distinction apply to you?
Some of us are naïve in nature, as in we choose not to see the artificiality of things. Coca Cola says that it is the best drink and naïve people drink it thinking that it is the best thing to drink. A sentimental author is busy with the way he tells his story. He or she is thoroughly aware that most of his techniques to tell the story are artificial. Most of his methods are learned. After reading two or three novels we all learn these techniques and develop them. There are two kinds of attitudes when we write a novel. One type of writer just writes without thinking much about their method. Writing and reading a novel is like driving a car. If we are naïve, we change gears, push buttons, and do different things with the functions without realizing that we are doing these things because we are busy with the story. If we are sentimental we think about ways to present the story. We are aware of the artificiality of the thing. I argue that a novelist is both naïve and sentimental. A good novelist has the tendency to forget all rules; they just go to the heart of the matter. Naïve readers tend not to see that novels are artificially constructed in a brainy way. We forget ourselves in those novels while other readers are too aware of its artificiality. In perfect solution they need to come together.

“A good novelist has the tendency to forget all rules; they just go to the heart of the matter. Naïve readers tend not to see that novels are artificially constructed in a brainy way. We forget ourselves in those novels while other readers are too aware of its artificiality. In perfect solution they need to come together.”

How did you begin your journey in translation and how has your practice evolved since? You grew up in Turkey—what about the language fascinated you at first?
My journey into translation began when my family moved from Princeton, New Jersey to Istanbul in 1960.  I was eight.  In the international school that was connected to Robert College, the university where my father had come to teach physics, they taught us French every day, but very little Turkish.  So for me the language swirling around me in the city itself was not a string of words but of gorgeous musical notes, choreographed by its speakers with gestures of great warmth.

Your translations of Orhan Pamuk’s work often go on to define other translations of his work, which is a huge responsibility that you carry out to the world.
Orhan and I have known each other since high school.  We lost touch, though, after I returned to the US for university.  We reconnected when I found his first novel to be translated into English on the shelves of the Independent on Sunday, London. I was writing for its book pages at the time.  In the first years, I gave him lots of literary advice.  When he first asked me to translate Snow, I not inclined to say yes.  I was not a professional translator! When I did agree, it was because, having seen a few other samples under consideration, I saw what I could do.  My aim was to try to convey in English the music of the Turkish, and also to recreate the narrative trance that I, as a fellow novelist, felt so strongly in his writing.  I was working on my own fifth novel at the time, and it was set in Turkey, and I kept bumping into walls with it, and I thought it might be interesting to leave it behind for a time and immerse myself in this extraordinary and extraordinarily Turkish novel.   My other aim was to go over my final draft with Orhan, as there were liberties I needed to take here and there that I wanted him to be okay with.  And also, he would have a chance to correct my mistakes!

You wear many hats—journalist, novelist, professor, translator, president of English PEN. How are all your roles connected, and have the others played a part in your craft of translation?
The best thing about getting older is that each strand of your life weaves into the others.  Somehow or other, I have always lived by the word.  By writing novels, for example, I learned how to build an alternative world.  When I sat down to translate, I sank easily into the depths of someone else’s.  By translating the works of a writer who was politically controversial, I learned how important it was for writers to be able to compose their thoughts and words in safety.  And how important it was for them to express them openly, no matter what the consequences.  And how important it was for organisations like PEN to support them.  And READ them, too!  Listen to what they had risked their lives to say!

With so many nuances and much that is said between the lines, how do you make sure a story is found and not lost in translation?
My own approach is to try and be a shadow novelist. Having sunk into the depths of those created worlds beneath the text, I then try to recreate the spatial, emotional, intellectual, and [most important] musical effects that I understand the authors to have deployed to bring their words to the surface, and to life. What I can say is that translation, being highly technical, frees up the imagination in an extraordinary way. It is like daydreaming while driving. So long as you stay on the road, your mind can go anywhere. It travels, and it learns.