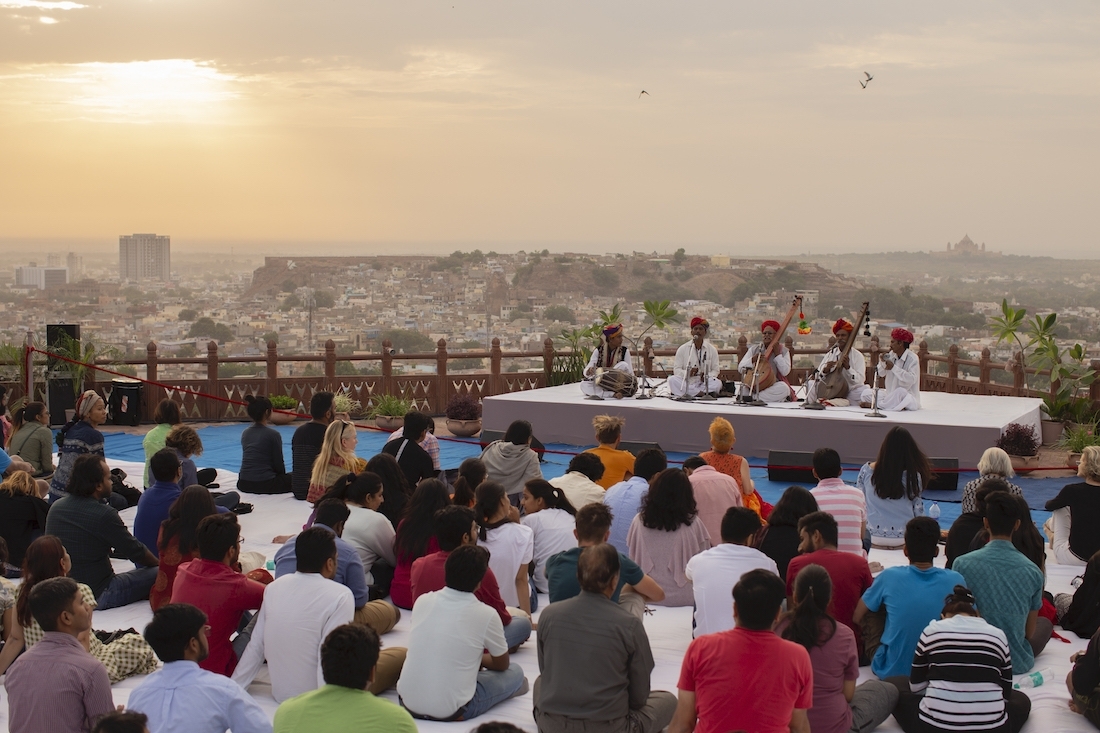 The majestic Mehrangarh Fort will play host to over 250 artists at the 12th edition of Jodhpur RIFF from 10-14 October, under the brightest full moon of the year. Music plays a key role in the transmission of cultural heritage and mirrors the society that we live in. And more so, it’s root and traditional forms.

Committed to premiering novel collaborations, programming fresh and compelling music and providing professional opportunities for both legendary and emerging performers, Jodhpur RIFF has always had a line-up of a diverse range of performances, spanning multiple genres and styles.

This year is no exception: an unusual musical alliance between Rajasthani and Irish musicians called 'Citadels of the Sun;' the ancient Armenian duduk (a double reed, woodwind instrument) played by maestro Emmanuel Hovhannisyan in collaboration with Swiss-based Authentic Light Orchestra lead by Valeri Tolstov and Veronika Stalder; maestros Ballake Sissoko from Mali on the kora, the ghatam legend Padma Bhushan T.H.Vikku Vinayakram and the incredible Muzikas from Hungary.

For the first time, the iconic RIFF Rustle is led by a woman - the fantastic Havana-born Yissy Garcia and percussionist Marypaz from Cuba. 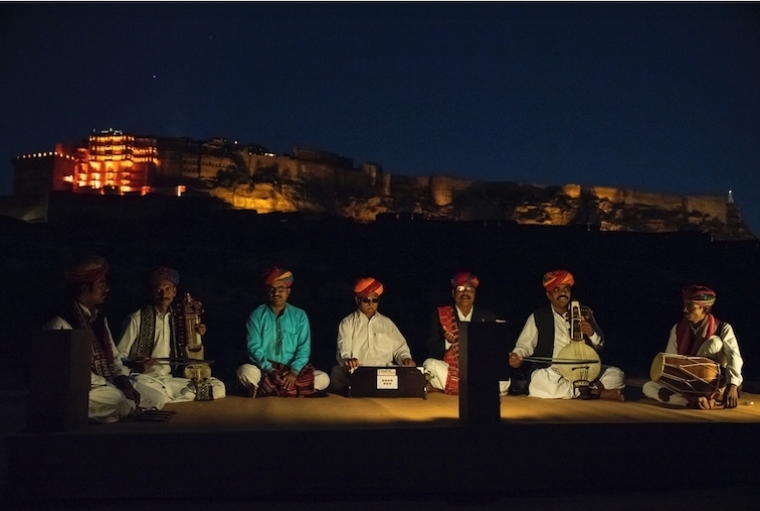 LIVING LEGENDS: More ritual than performance, the priests and followers of Jasnath ji ke Bhope are believers in Shakti, the divine female energy principle expressed through their relation with fire. Unique to their tradition, their daily practice includes the control of senses, walking on burning cow dung to trance-like music, feeling the energy of the universe flow through them. Hakam Khan Manganiyar, an elder of the community and is a custodian of the rich repertoire of the Manganiyar vocal traditions. Rawata Ram Shekhawati Rawata ji, custodian of the dhol thali nritya with his group from Shekhawati. A farmer-led, entirely improvised dance celebrating the success of a new crop. Kachara Khan Manganiyar - internationally renowned sufi folk singer.

RIFF DAWN concerts: Meghwals of Marwar: Traditionally, weavers, Meghwal are known for their contribution to embroidery and the textile industry, and for the rich folklore they nurture. Bhallu Ram, Teja Ram and Parbhu Ram will sing the poetry of popular and the saint poets of Rajasthan. Nirguni songs of Rajasthan, an amazing tradition, led by the soft and lilting vocals Bhaga Khan Manganiyar and Mahesha Ram Meghwal. Valeri Tolstov multi-instrumentalist and composer, Andrew Cronshaw zither-player and heavily influenced by traditional Finnish, Scots Gaelic and North Iberian music & Carnatic vocalist extraordinaire  Mahesh Vinayakram - collaborate with Asin Langa, young Sindhi Sarangi maestro and Darra Manganiyar, master of the kamaicha. Bir Singh is a singer and lyricist based out of Amritsar, Punjab. With his versatility, original and nuanced writing and a bold voice, this multifaceted singer has made a mark for himself in Punjabi folk.

MAIN STAGE: Sumitra Devi in her mellifluous vocals along with other young women singers, who are breaking gender and social norms by reclaiming their space in folk music will perform at the opening night concert and will  presents a variety of riveting performances reflecting the diversity of traditional Rajasthani music and excerpts. Womanly Voices seeks to bring to the fore voices of women singers from the folk traditions of Rajasthan. While women from these traditions perform in their own communities, it is rare to see them present their work on mainstream stages. Artists like Mohini Devi who will be singing in both the jogi Kalbeliya tradition as well as in maand, Rajasthan’s unique contribution to the Hindustani music repertoire; and mother daughter duo Ganga and Sunder, who sing spiritual songs in their own inimitable style. Israeli musician Noam Vazana who goes by the stage name ‘Nani’ is an acclaimed singer, composer, pianist and trombonist who brings a breath of fresh air into the jazz and world music landscape with her hypnotic vocals – her timeless compositions blending Middle Eastern music, North African beats & her own Ethnic-Jazz songs. Citadels of the Sun are a new two-part creative collaboration that emerges from the many folklore and historical connections between India and Ireland, from the origins of the Irish and Indian fiddle to our shared colonial past. The band features some of the best musicians from Donegal and Rajasthan. Voita re-presents the maloya, Reunion Island’s vibrant symbol of creole culture. Banned until the 1980s, maloya’s strident vocal calls, chanted responses and complex percussion rhythms originated with the slaves brought to work on the sugar plantations and became a weapon of resistance. With a mix of African and Indian slave cultures and a deep respect for the traditions of the past, Voita’s music laces legacy with present-day Reunion Island relevance, opening traditional maloya to new and wider horizons. Legendary folk songs of Marwar by some of the regions’ master musicians such as Sugna Devi, Lakha Khan, Kadar and Asgar Langa, Daya Ram, Barkat and Talab Manganiyar, a special showcase of some of the most unusual, significant, and legendary songs of the desert regions of Marwar and its vicinity. Ballake Sissoko considered as one of the most important musicians of his generation is a Malian virtuoso kora player and composer. His performances are known to entrance audiences in his suave and crystalline sonority, magnified by his talent as a melodist and an improviser. He is the first local kora player to master musical styles typical of the Western guitar while still being able to maintain the traditional West African rhythmic structures required for dancing. Karolina Cicha is a singer, composer, multi-instrumentalist and one-woman-orchestra, Karolina is known for her masterful vocals with accordion in one hand, keyboard in another and drums by her feet. Legendary Hungarian folk band Muzsikas who have been considered to have pioneered the global popularity of Hungarian folk music that is now a well-established niche in the roots and world music scenes. Rajasthani Brass celebrates Rajasthan’s vibrancy and colour as folk musicians will collaborate with Mehrangarh’s own house brass band - an ensemble on trumpet, trombone, euphonium, clarinet, bass and other instruments, presenting a heady, exciting musical reflection of this enchanting region. Authentic Light Orchestra, founded by Swiss multi-instrumentalist with Armenian roots, Valeri Tolstov, combines different musical genres such as jazz, elements of Armenian folk and modern composition. The band brings freshness to roots music, with a new musical language and distinctive sound. Pandit Vikku Vinayakram -Padma Bhushan, Padma Shri, and Grammy Award winning Indian percussionist 1991. He has performed globally and is credited for popularising the ancient percussion instrument ghatam (an earthen mud pot) across the world. 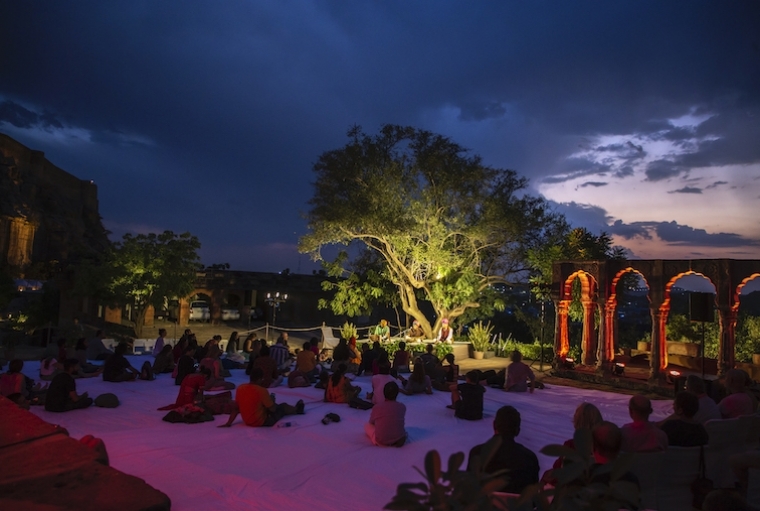 DESERT LOUNGE: It is an unusual, moon-lit, rustic musical experience under the stars at midnight in the tranquillity of a revitalised desert park. The night features a variety of traditional Rajasthani acoustic performances from the various jogi traditions of Mewat – a Mewati evening of original and traditional poetry, often satirical, sometimes cheeky and sometimes an unusual telling of epic myths and stories by Babunath jogi, Yusuf Khan and others. Danish Husain Badayuni and his troupe of musicians and qawaal from the Rampur Seheswan gharana will present regional, folk and sufi Qawaali renditions.

DANCE BOOT CAMPS: Musically led by legendary folk super group Muzsikas participants will get a fantastic opportunity to get insights and guidance first-hand from expert dancers, the unbelievable HangaKacsó and Béla Szerényi. The fantastic Asha Sapera will facilitate a Ghoomar workshop usually performed by women in groups wearing colourful, mirror-embedded ghaghra (flowing skirts) and covering their faces with a matching coloured veil.

MOONRISE SESSION: Pushkar Lele, one of India’s young and sought-after North Indian classical vocalists from Gwalior gharana debuts at Jodhpur RIFF, under the rising moon. With rarely heard compositions in his rich and sonorous voice, Pushkar will uncover the deep intricacies of Kumar Gandharva’s unique gayaki acquired from over two decades of study and training.

RIFF RUSTLE: RIFF Rustle is our largest, impromptu collaboration performance that concludes the festival's night time revelries. Every year, the festival appoints one musician as a 'rustler', who then rustles up other musicians from the festival to participate in this performance in pairs or quartets or altogether. This year the young, highly skilled and accomplished Yissy Garcia will be our “rustler”. She is a composer and drummer and one of the most powerful artists of a new generation of Cuban musicians. With her creative impulses and grooves, her wide-ranging experience with compositions and collaborations that run across different musical genres and styles, she gathers musicians to come and jam with her and compatriot Mary de La Paz, collaborating with Rajasthani musicians and curating a set for the Rustle.