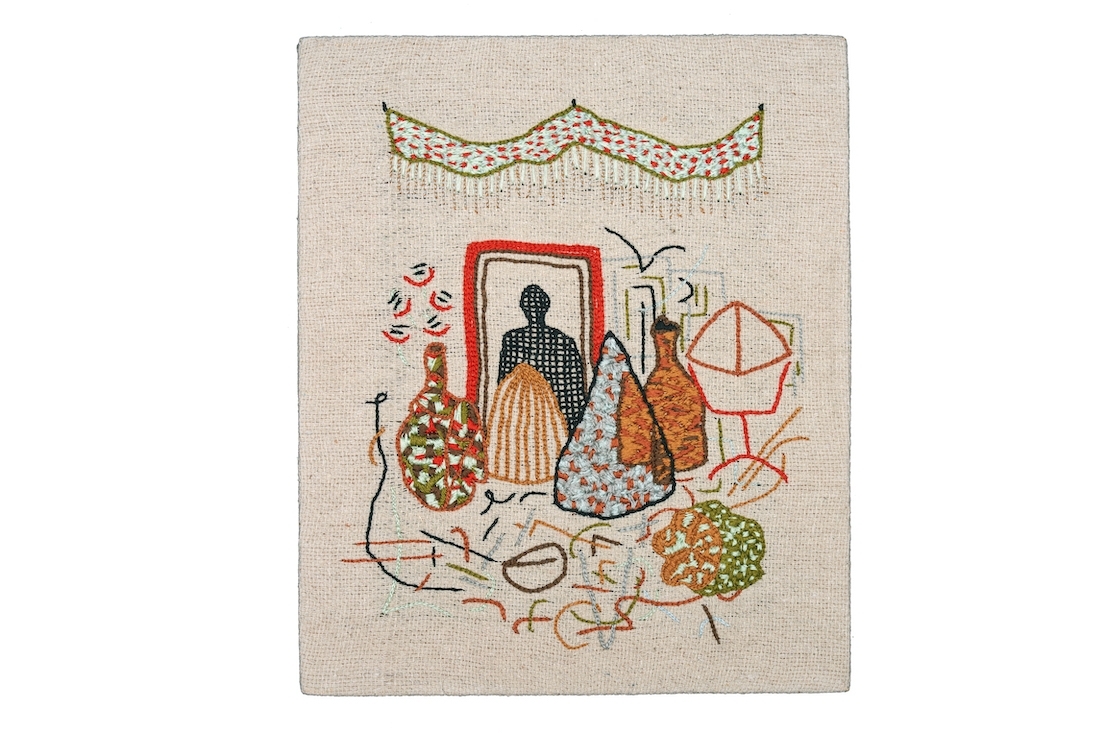 Artist Areez Katki was born in Mumbai and grew up in various places around the Middle East, until his family migrated to Aotearoa, New Zealand before he was a teenager. ‘Those, in Aotearoa New Zealand, were the formative years that influenced and allowed me to question, grasp and tackle various systems of understanding and processes of conceiving ideas, that have gone on to influence my artistic practice,’ he explains. As an artist and writer, Areez draws from historic and social research to explore his genetic landscapes via processes that include embroidery, weaving, painting, sculpture and printmaking.

His first-ever solo exhibition in India is being showcased at Tarq, titled Bildungsroman (& Other Stories). The title borrows an all-encompassing term from German for a person's spiritual and psychological journey. In the works created from his time in Mumbai in 2018 till 2021, Katki uses embroidery and archival objects sourced from his family home to explore themes of spirituality, migrant identity and sexuality, using domestic cloth as its grounding framework. He interrogates patriarchal hegemonies using a visual language grounded in domesticity, illustrated with techniques and materials that were once relegated to the ‘feminine domain’. Using handwoven cotton dust cloths, khadi, glass beads, and repurposed textiles, the artist weaves together his multiple identities as a member of the traditional Parsi community — a child of Zoroastrian immigrants — and a queer New Zealander, reclaiming his heritage by reframing it to fit his identity. Katki's embrace of traditional embroidery techniques, taught to him by his mother and grandmother, is a tribute to the most cherished aspects of his childhood.

We spoke to him to know more.

What drew you to the arts?
I suppose the answer to this isn’t as easy for a person who has had experience in various fields, though never dwelling too far from Art. Craft sensibilities and a sort of early introduction to non-Western modes of expression were made to me by the women in my family — my mother, grandmother, aunts. And then I went on to study and harbour interests in fields of art, as deemed by colonial terms (rhetoric, media, theory and material from a Western dominant-culture) since high school. This took me through to my undergraduate degree in Art History. Later, as my conceptions of colonialist hegemonies within the art world grew, I began to revisit craft as a way to repudiate and challenge those values. These are evident in my use of mark-making, which dwells in somewhat of an ambiguous relationship with the figural and the gestural. Some that are highly chromatic are attempts to reinstate, remember and suggestively interpret those aforementioned lost fragments of knowledge. And others dwell in the instinctual and sensorial, the more immediate impulses that de-language from a consistent vernacular. This is why, to me, the visual lexicon of loss needn’t be limited to only one mode of communication. Our history, our migratory trajectories and our contemporary narratives are never neatly executed or communicated by only one linguistic mediation. It is layered, complex and therefore, may dwell in an abstract void.

It makes me feel somewhat empowered, to recognise and work from within the plurality of a migratory framework, even today. There are fewer limitations. These executions have felt most fluent, in my experience, when they were approached with a certain degree of malleability — a productive oscillation between the graphic and the suggestive. A rich multiplicity of expression will inevitably result in discord, chaos and confusion for a viewer and I feel comfortable with that at this point in my career. I’ve found, also, that a bit of humour goes a long way when one addresses anything in that language of plurality — especially when one talks back to an audience back home, allegories are an appreciated medium (Persian literary traditions are rich in allegory). Allowing the symbolic and the literal to coexist is a way of bridging a gap in those lost systems of knowledge; they are both helpful guardians, kindly bedfellows, who may ease one into a deepened state of understanding around the tactile, material-driven lexicon that is being recorded.

Embroidery, weaving with textile and fiber are the primary processes used in your work. Could you tell us about the reasons behind choosing them and how they help in communicating your art?
I cited traditional techniques, but also subverted those Gara and Kor (border) traditions of Parsi embroidery. I did not wish to cite the resplendence, opulence or wealth — my story needed to be told on egalitarian, humble surfaces of the domestic realm, the realm of the interior (as opposed to the presentation of oneself in a manner that is often contrived, showy) and therefore I quelled the quotidian for my inspiration and my materials. I learned how to work with cloth (weaving, embroidery et cetera) from my mother and grandmother. Their support and wisdom has helped me in the ways one might find most obvious: supplying me with an arsenal of curiosity, love, care and kindness.

You’re from India, born in Tardeo to Zoroastrian immigrants, now living in New Zealand. How have all the different identities help make the artist/creative you are today?
Somehow, the migrant identity, which includes my Zoroastrian heritage (spirituality) and my sexuality as a queer individual, had to be contended with in one arena: my body. The corporeal remnants of my spiritual indoctrination, plus social pressures and familial structures, began to disintegrate as my sexuality developed and grew in curiosity and experience. Slowly, over many years of adolescence and early-adulthood, a sense of what it meant to inhabit and emulate an ‘alternative’ to the suggested and prescribed. This subversion of the prescribed identity soon came to feed on cultural theory, sexuality and, yes, also spirituality, in simultaneous feedings. This, in turn, reflects in the work that you see produced in more recent years — as visual but also thematic consolidations between the two that let down the barriers between what is considered taboo by one (spirituality) and conservative to the other (sexuality). They were, and always will be, consumed as one entire meal, henceforth.

How do both the textual and figural elements enrich the artist in you?
As far as I’m concerned, both textual and figural elements that appear in my work are part of the same visual language; language and phenomenology are semiotic co-conspirators that I like to keep close while plotting my visual inquests. They both help me figure out what to avoid and what to suggest, or perhaps what to explore by means of textuality in, say, chroma or gesture, as opposed to figuration, and vice versa. The tension between those diegetic and non-diegetic ways of communicating are at the crux of visual and linguistic hybridity, which is something that I have been very interested in lately.

These explorations also allow me to relinquish some of the strictures imposed by Western conceptions of art (whether or not I’m being orientalised or tokenised for my use of mediums, or for my ethno-cultural background), and also shed the austerity of literature (or purely linguistic means of communication). I’d like to think that there’s an instinctual lightness in that approach, a malleability, when one embraces concurrences if and when they feel appropriate, but also somewhat technically-driven to enhance a process of intertextual storytelling.

What do you want the audience to take away from the show?
Whatever they want or can. I’m not here to impose any ideals. There’s already a lot being imposed on audiences today — as an artist I’d like to leave doors open rather than create more limitations.

Lastly, are you working on anything new?
Yes, I am currently completing a new suite of works for a project at Colomboscope Multidisciplinary Arts Festival (in Colombo, Sri Lanka) with Natasha Ginwala and Anushka Rajendran, which has been rescheduled to take place in January 2022. I am also in the midst of working on a large body of work for an upcoming exhibition at The Govett-Brewster Art Gallery/Len Lye Centre (in Ngāmotu New Plymouth, Aotearoa New Zealand) which will open in late 2021.