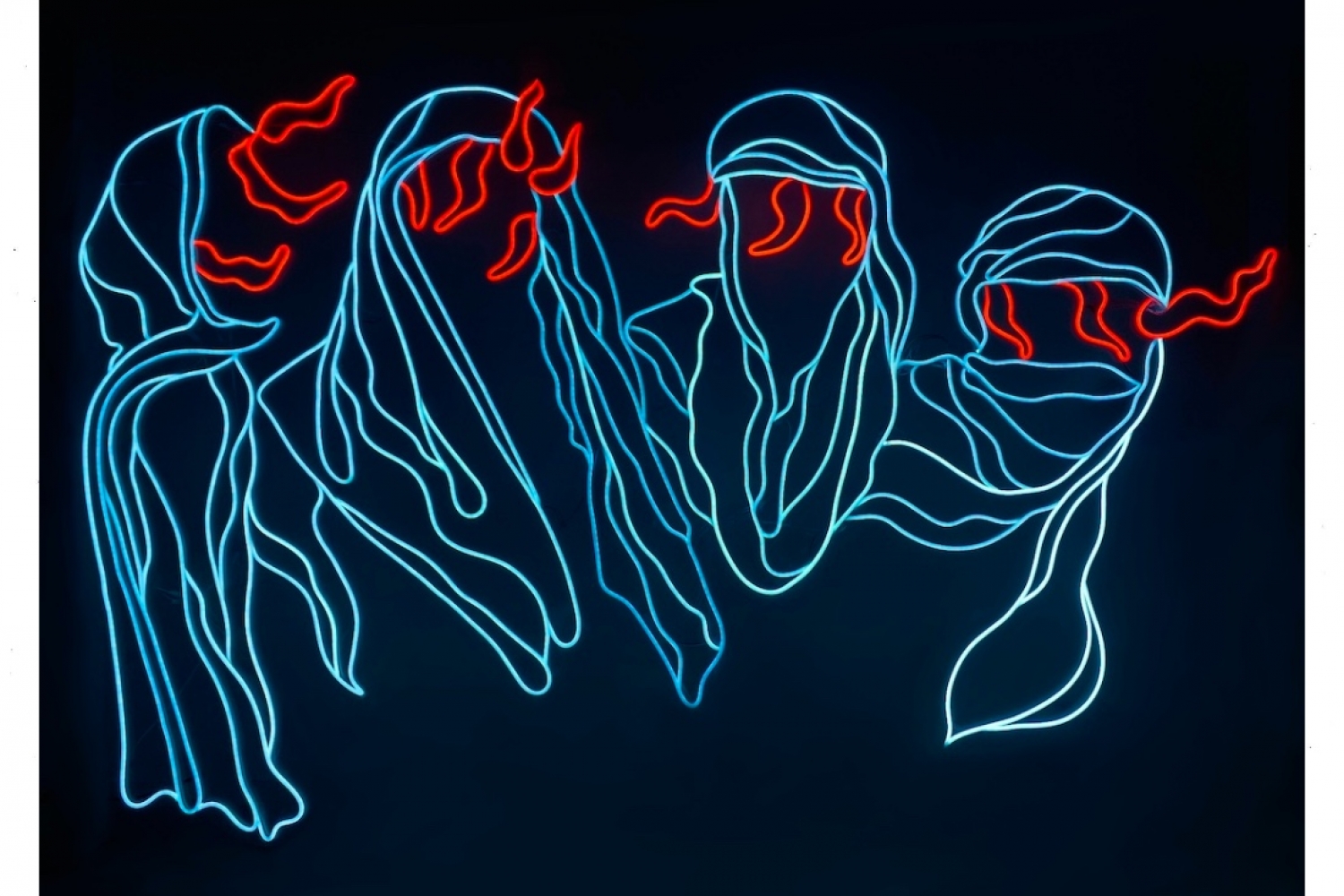 An amalgam of mix-media, collage, miniature painting, digital and neon art, multidisciplinary visual artist Haya Zaidi’s practice pivots around the personal and traverses the world and beyond through the brown female body. Exploring subjects like race, gender, identity and sexuality in the sub-continental cultural climate is a specialty of hers. A native of Karachi, the artist completed her BFA from the National College of Arts, Lahore, specialising in Miniature Painting. As someone who throughly enjoyed her bi-weekly art class since a young age, Haya always knew the arts were her true calling. Interested in exploring diverse mediums during her time at art school, she found it difficult to be pinned down to a particular artistic style, but finally found peace in working with mix-media. Presently, Haya is extensively researching, experimenting and creating works that stand for her idiosyncratic visual vocabulary, through which she can communicate without being tethered to a single means of expression. Made out of plastics, fabrics, paints and even metals, her pieces are celebrated for being untamed and branching out in all sorts of directions.

We’re in conversation with the artist down below who tells us more about her inspiration and process amongst other things.

What would you say defines your practice?
I have perpetually been interested in exploring the subject of female identity politics. As a trained miniaturist, I have studied several bodies of works of Miniature and found story-telling to be one of the key elements of Miniature Painting. One could also conclude that the birth of art happened because someone wanted to tell a story. Early cave paintings are essentially just visual stories of hunters — free flowing silhouettes of animals and stick figures with tools. I think the element of having something to stay — a narrative, a story — is an important part of my practice as a visual artist. Satire too is something that defines my work. I tend to not take myself too seriously and that reflects in my art. People who know me personally can’t quite expect serious art coming out of my studio. Satirical art has a quality of duality to it because it’s clever, cheeky and encourages one to think about art with an ingenious perspective. It also has a quality of surprise to it, keeps things interesting and exciting. Spontaneity and chance also play a part in my work. It’s also a great exercise in giving up control.

All in all, I feel that south asian women have had very little representation in art history in general and that’s the major drive in defining my practice. Brown women’s portrayal has generally been very idealized, oriental and through the male gaze. If you observe miniature works from the Mughal Era, you see several naked gopis around a singular Krishna, or the highly exoticized female servants and the Maharani; basically every female character is a South Asian Barbie doll. Their bodies and faces have been rendered to perfection — big eyes, thin noses, long necks, slender arms, long hair, big busts, big buttocks, extremely thin waists and a long exposed torso — usually dancing in an enticing manner around a male figure, in the water, tending to animals or children, dreaming in a tower or in a garden. Brown women have been painted for decades to look like these gorgeous, exotic and obedient mystics in works of art; I want to change that. I want to re-tell our stories as South Asian women and reinvent our representation. 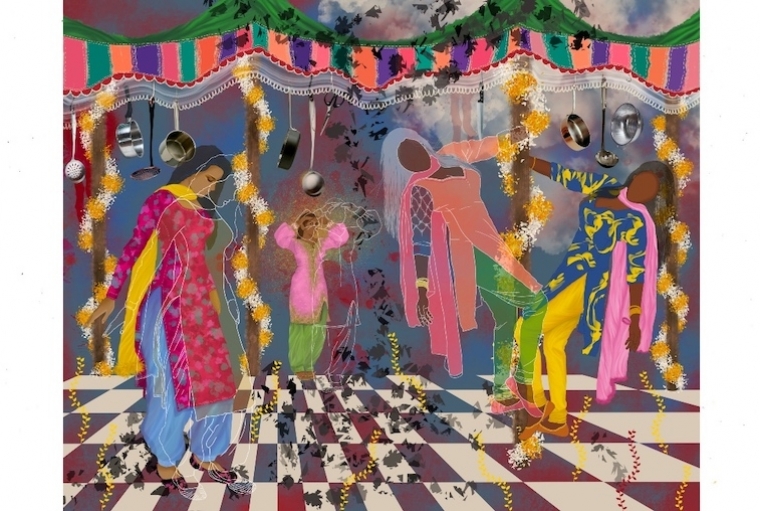 Disassociating from self at night

What is it that inspires you in the present moment?
I’d say I’m inspired by the bitter-sweet and comforting mundanity in the lives of women around me. While growing up, I've witnessed my mother, my aunts and my grandmother do all the housework and being so occupied that they didn’t even have a Sunday. They’ve been humble and very accepting of the monotony of it all, even if there was too much expected of them. I’ve idealized these women growing up, with them being the primary caregivers. And not just these women, women everywhere. Women in my neighbourhood, my teachers at school, women who work as hired home workers, cleaners/cooks — nearly everyone. In a strange fashion, all these people are a part of my identity.

My work is personal and influenced/inspired by the Pakistani landscape. I have lived here all my life, made several observations, judgements; had numerous epiphanies. It’s an accumulation of every conversation I've ever had with anyone, everything I've experienced, worn, every cuss word thrown at me, every embrace, every Eid, it’s my whole life. I am also deeply inspired by the kitsch elements present in the subjects depicted in Mughal and Persian Miniature Paintings — scenes at the Royal Court, Royal portraits, tales of rulers, Hindu and Muslim mythologies, morality tales, mystical poetry, exotic flora and fauna, hunting and garden scenes. Miniature Paintings have persistently made use of gold leaf (the only available source of lustre at that time) in a decorative manner.

If one looks at the history of South Asian Art, from the bejeweled dancing girl of Indus Valley Civilization to embellished carvings on ancient buddhist sculptures, kitsch has always been a founding pillar. As a bystander of South Asian culture, I have found my work to be inseparable from Kitsch culture. In my visits to local grocery vendors, shopping malls, slums, I’ve never found myself present in a minimal/beige space, devoid of lustre and glint. Travelling in rickshaw, buses or taxis, there’s always pieces of golden threads, mirror works, brightly painted motifs and velvety neon cushions present. I see women in funerals and weddings alike, flaunting gold on their bodies and plastic studded diamonds on their 1$ flip flops. From beaded hair clips to constellations of silver and golden sitaras stitched to their abayas, bling culture is everywhere. 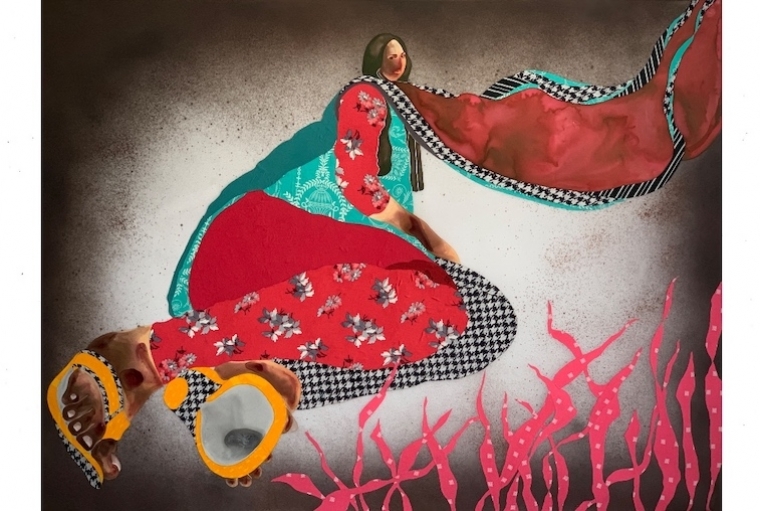 Take us through your creative process.
My creative process is very interactive. I usually start with a faint idea in my mind. Initially, I brainstorm and make a few quick sketches. When a sketch is finalized, I usually draw it on Mylar/Canvas/Plexiglass. I improvise a lot so I use a very thin pencil (H series) which is easily erasable. With a vague image in mind, I skim through various lifestyle, fashion, food and home furniture magazines. I cut certain images and place them randomly on my work. If you observe my work, you’ll see that there are many collage pieces that shed light on domestic labor. For instance, cutouts of cutlery, cooking pots and pans, bathroom towels, floor wipers, cushions and food. Then, with a narrative in mind, I arrange and rearrange these pieces, not pasting them on the medium yet. I do some more drawings around these images. I experiment with a variety of materials like fabric, paint, contact paper, lace, et cetera, to create a visual flow in the work. I usually use fabrics (mostly lawn or cotton) that my mother and sisters have previously worn and have faded with time.

I play with color, shape and form, and try to work with all these materials in a way that they lose their personal identities/forms and collectively become a singular entity, appearing whole. This entire process works in a flow, using materials that complement each other. I specifically pay attention to maintaining a balance within the composition, looking at space, volume, shape, form and color. When I am working with neon sculptures, I draw a solid sketch with a semi-permanent marker on a glass or acrylic sheet. Then I carefully cut and stick strips of neon light rubber tubes over the drawing, leaving spaces in between, so I can connect them to copper wires later on. The original drawing is erased towards the end.

What do you want the audience to take away from your work?
I’d like the audience to engage with my works and form their own individual narratives and interpretations about them. Since my work is layered with multiple characters, symbolism, ambiguous scenes, collages and stories, I’d like the audience to approach the works with an open mind and let their child-like imagination take them to a different world. I want them to feel the colors, textures and shapes in a way that evokes playful emotions and memories. I want the audience to be intrigued by my work but also amused. I love it when someone spots something silly in my work like a funny set of eyes, a towel or a broomstick and smiles. I want the work to be interactive and to draw people in, to be something they think about when they go back home. 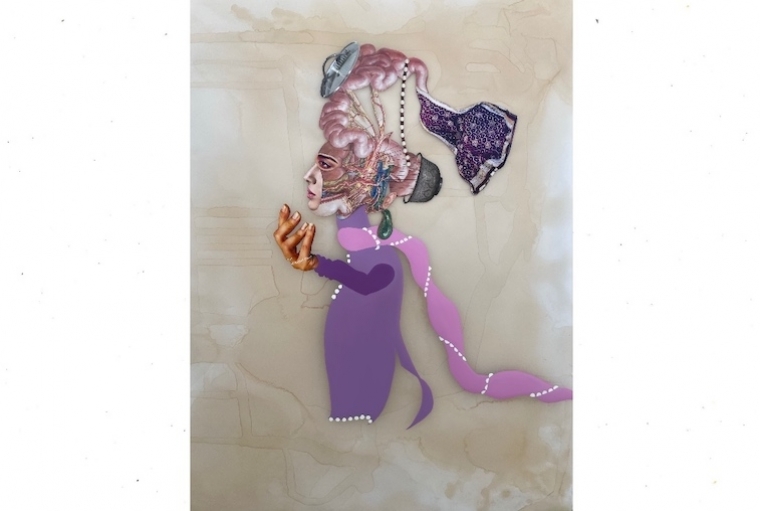 Finally, what’s coming up in the new year?
I’ve just recently wrapped up my solo exhibition Unpinned at The Colony, Lahore in December 2021, which was a great learning experience. I am exploring different mediums currently, a variety of plastics and fabrics, and have been experimenting with scale and the general palette of my works. I think I am definitely open to newer ideas this year. I have an exhibition coming up in Lahore with O Art Space in August  and I am really excited about it. I am playing with the translucent quality of different mediums and working with depth and 2D/3D sculptures. I am doing research about old miniature paintings and manuscripts, works that are specifically from the period of Emperor Akbar’s reign and looking at colors, textures, characters, symbolism and calligraphy. I definitely want to grow as a neo-miniaturist and a visual artist, expanding my practice but staying close to my roots.