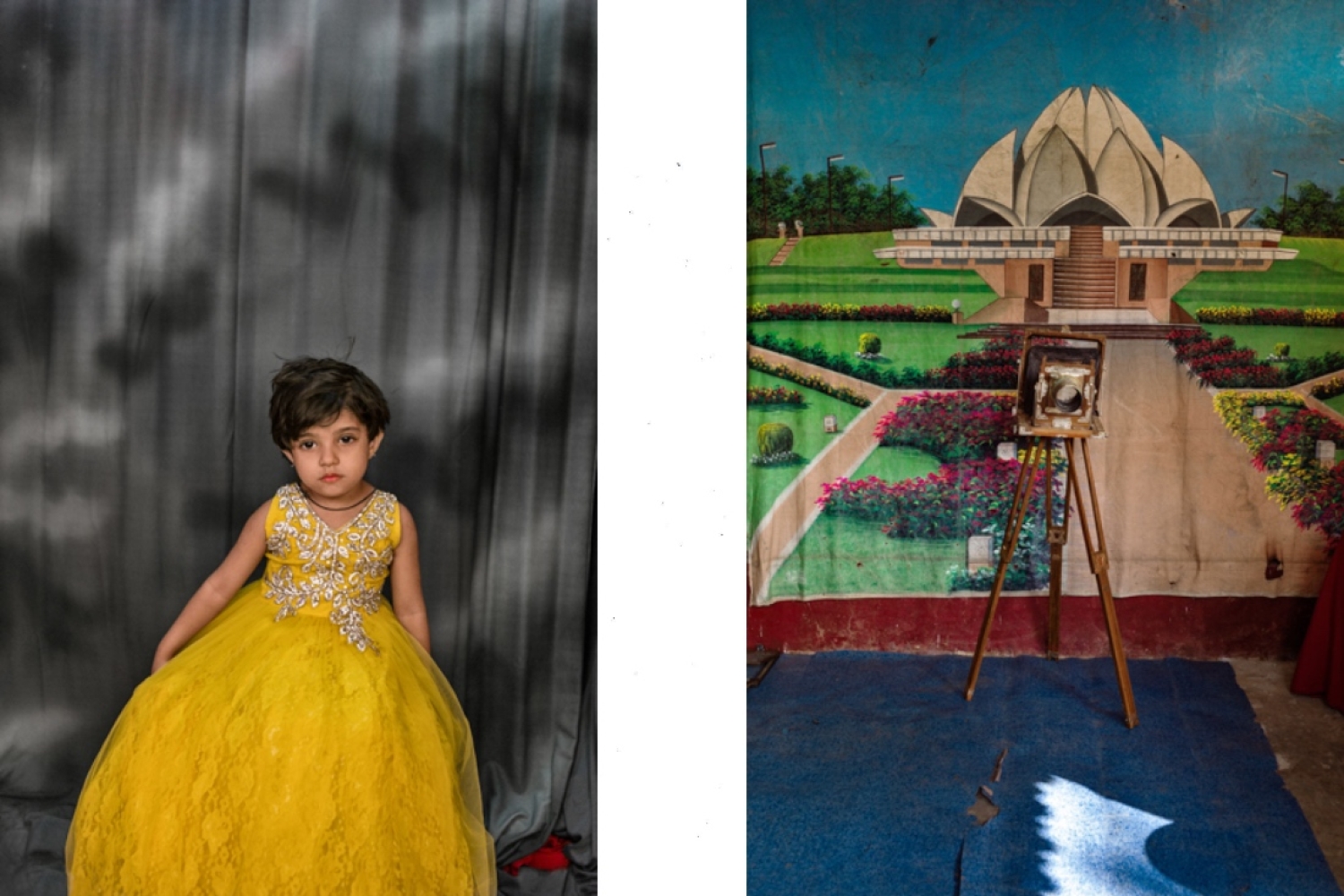 Chemould Prescott Road in association with PHOTOINK is pleased to announce Ketaki Sheth’s first solo exhibition of colour photographs and the accompanying publication, Photo Studio. She has been photagraphing for 4 decades and until 2014 was a committed analogue photographer who used black and white film. Photo Studio marks her extraordinary transition to photographing in colour using the digital medium.

Between 2015-2018, Sheth travelled across India and visited over 65 photo studios, most of which were in a shabby state of decline. Photo studios in India have been explored by many photographers and written about extensively. Sheth’s approach to the photo studios is anything but conventional as she often ignored the strict conventions of making formal, mannered portraits of people with inscrutable expressions. Instead, she used ageing studio lights when available, one handheld camera and lens to exhume tales of past glory and draw one’s attention to objects and a cast of characters that surrender gracefully to her gaze.

Photo Studio is as much a story about photography in the age of selfies as it is about contemporary life and attachments. Over the years, Sheth has shown remarkable facility as she shifts seamlessly between two distinct ways of making photographs—the posed portrait and street photography. The book design by Itu Chaudhuri complements Sheth’s aesthetic sensibility without conceding to either humour or pathos in the way the book unfolds. Chris Pinney’s essay provides the historical and theatrical context to photo studios in India and Sheth’s fluid interventions in those spaces.

Shireen Gandhy, Creative Director at Chemould Prescott Road adds, “For us at Chemould Prescott Road, showing a photographer like Ketaki Sheth who's work speaks to us on so many levels is an absolute privilege. Having seen her work for the last 20 years, ‘Bombay Mix’ seventeen or more years ago in the city, or devouring the book ‘Twin-Spotting’, and to now be able to bring the work Photo Studio to the city of cinema and dreams feels appropriate and exciting. The gallery has the potential to create its own spaces, and with this exhibition Photo Studio, for us to create an actual photo-studio will lend itself an added layer of what this work means especially when audiences have the possibility of becoming a part of the work.

For Ketaki Sheth, the movement to colour came about simply by “the lack of materials, film, chemistry, labs shutting down. I did it a bit grudgingly but then leapt into it. Colour excited me no end! I started seeing colour on the streets of Manori and found I was using colour well. My eye was trained to spot a picture on the street but now I was looking in colour. When I found two girls dressed in lilac dresses in the morning light coming out of church with two golden dogs looking at them, I knew it not to be just a singular piece of good luck (although luck plays a huge role). I, then found surfaces, curtains, interiors of local homes, eating houses, local gardens and places where I was no stranger (I’ve had a home in Manori for over 60 years) using colour as form. I found my first studio in Manori which led to 70 more in eight different states in India. I'm now hoping to do something in Mumbai, something that’s yet only an idea in my head (ideas don’t always work!)

The show will open on the 17th of September at Chemould Prescott Road, Mumbai, and will be on view till the 20th of October.

This article is an all exclusive from our September EZ. To read more such articles, follow the link here.