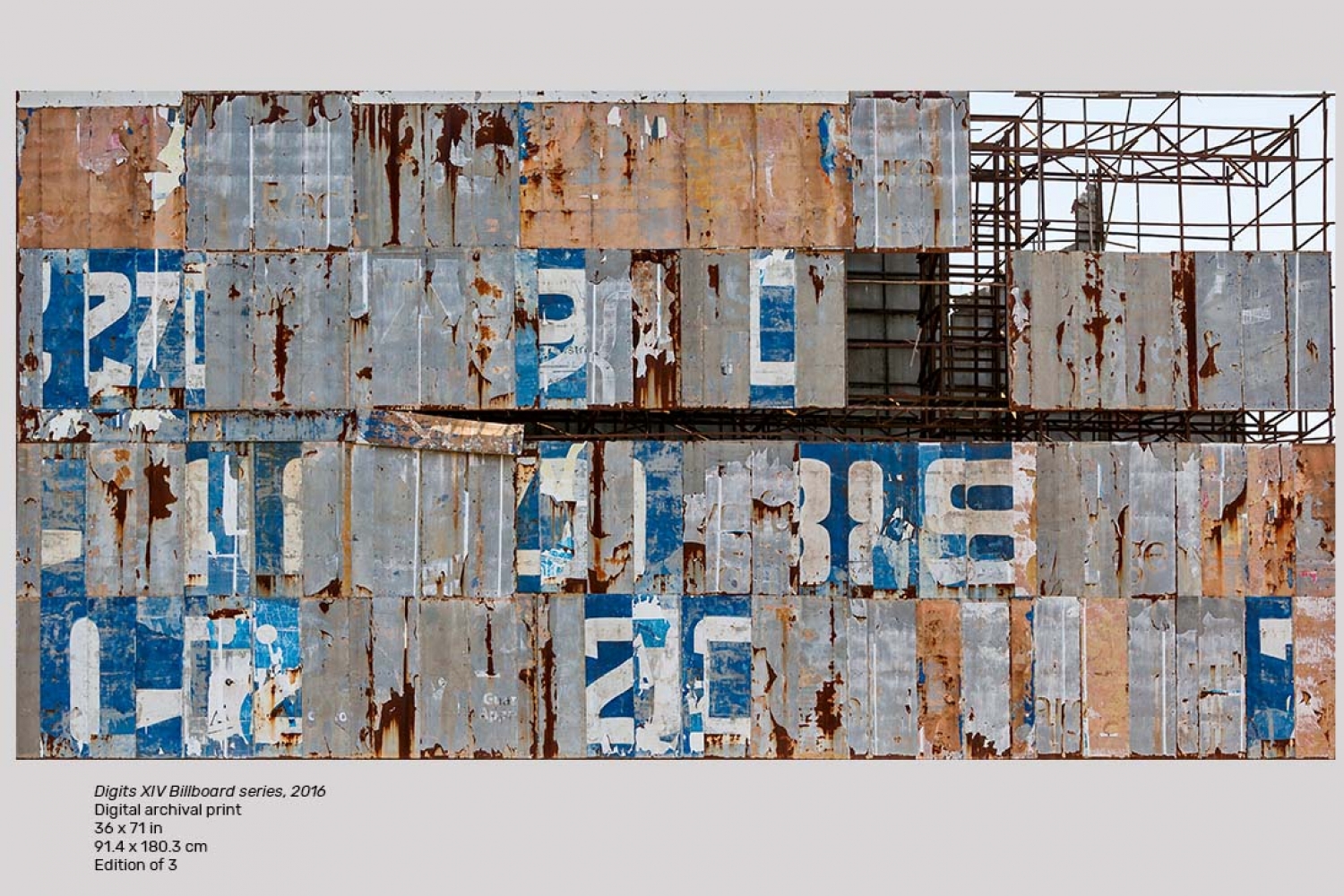 Manish Nai’s artistic practice is dedicated to an engagement with materials of a diverse variety. Often using the most modest of means and the slightest of gestures, Nai questions the identities of found materials, such as newspapers, books, jute sacks, used clothing, and recycled metals, through the strategies of accumulation, compression, and recontextualization. In photographic works, his keen eye discovers beauty in the mundane abandoned billboards and mottled walls that are found throughout his city. In his newest body of work, he turns his attention to the corrugated metal sheeting which is often used in temporary shelters and ad hoc housing in urban India. The surfaces of the metal sheets retain the traces of multiple coats of paint and the artist’s choices exploit these distressed markings as well as the random appearance of rust to create dense chromatic fields. These works, partly painting and partly sculpture, occupy a location of architecture, albeit at its most rudimentary and hesitant. In works executed on both paper and fly netting, Nai eschews any sort of imagery in favor of foregrounding pure pigment and its elementary properties.

The exhibition at Nature Morte is Nai’s first solo show in New Delhi and the works have been chosen to display both the elasticity and the specificity of the artist’s thought and approach. The viewer will witness how Nai treats very different materials in very much the same way, drawing out the inherent qualities of these materials and amplifying them, to create works of a surprising richness, heterogeneity, and eclecticism. While rooted in the traditions of both Minimalism and Arte Povera, Nai’s art pushes these languages into an almost Baroque ripeness, while exploiting an indigenous identity. By upcycling the most humble materials into art works of both elaborate portent and sumptuous demeanor, Nai’s practice participates in dialogues of sustainability and its implications of ecological integrity and social justice.

Born in 1980, Manish Nai received a Diploma in Drawing and Painting from the L.S. Raheja School of Art in Mumbai in 2001. He has exhibited his work at Sundaram Tagore Gallery, New York (2019); Devi Art Foundation, New Delhi (2019); Bhau Daji Lad Museum, Mumbai (2017, 2019); Para Site, Hong Kong (2018); Museum of Modern Art, Warsaw (2018); and at The Sculpture Park at Madhavendra Palace, Jaipur (2017) in the recent years. He has had solo exhibitions at Richard Taittinger Gallery, New York (2021); Kavi Gupta, Chicago (2019); Galerie Karsten Greve, Paris (2019), St. Mortiz (2014, 2018); Cologne (2018); Galerie Mirchandani + Steinruecke, Mumbai (2018); among others. In 2017, the Fondation Fernet Branca presented a comprehensive exhibition of his paintings, murals, sculptures and photographs in St. Louis, France, which then traveled to the Het Noordbrabants Museum in The Netherlands in 2018. Nai has participated in the Kochi-Muziris Biennale, India (2014) and Shanghai Biennale, China (2012). The artist lives and works in Mumbai with his artist wife, Aaditi Joshi, and their son.