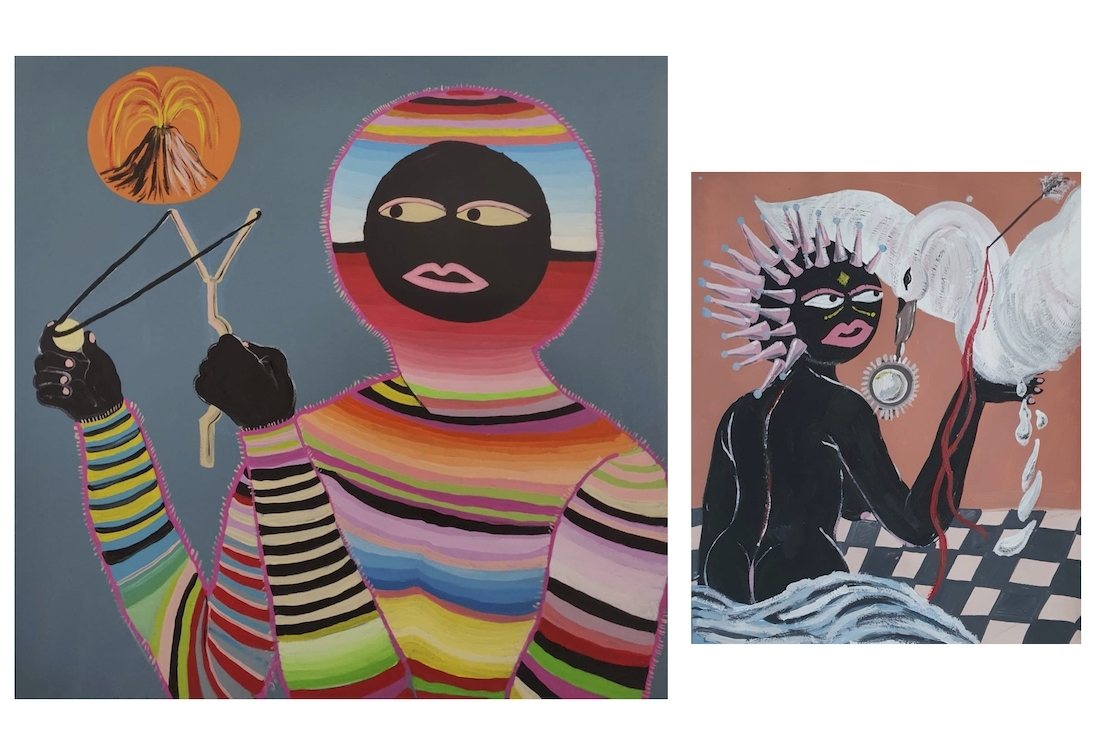 Born in Varanasi and raised in Africa, artist Rithika Pandey has always been on the move. While being in transit, due to the nature of her father’s work, led to uncertainties in life. However, it also exposed her to a plethora of cultural narratives. She explains, ‘I was always in awe of the rich culture I was exposed to in Africa and India (and now the U.K.), with its mythologies, histories, rituals and dances. In a way, these vibrant visual landscapes embraced me and helped me adapt to the changes. I’ve grown up with the impact of colours so much that it’s no surprise that it guided me towards becoming an artist that I am today.’ Every time she’s in the process of creating art, Rithika feels privileged about her travels, and content for her younger self, who was on the receiving end for art, culture and beauty that exists in varied corners of the world.

If one were to ask about her striking artworks, the larger than life beings with their peculiar characteristics, she would say that her inspiration is drawn from plenty of sources. Fascinated by Hindu and Buddhist mythological paintings since childhood, she loves exploring the synthesis of humans and nature at the corporeal level.‘The vivid colours always hint at something sacred flowing underneath, which is similar to Francis Bacon’s works that I adore so much. I guess I’m working my way towards building that ‘Aura of Sacredness’ in my work. The colours I use to fabricate the spaces in my paintings play an important role in creating the mood and theatricality for the act that would unfold, as the painting progresses. One of the most important elements in my works are the black bodies or Bloomdidos, dressed in ornamental clothes, which more often than not reflect their varied emotional states. Besides the symbols and mysterious objects that occupy the landscape, there are also non-human subjects that share a peculiar yet significant part in the space,’ she adds. 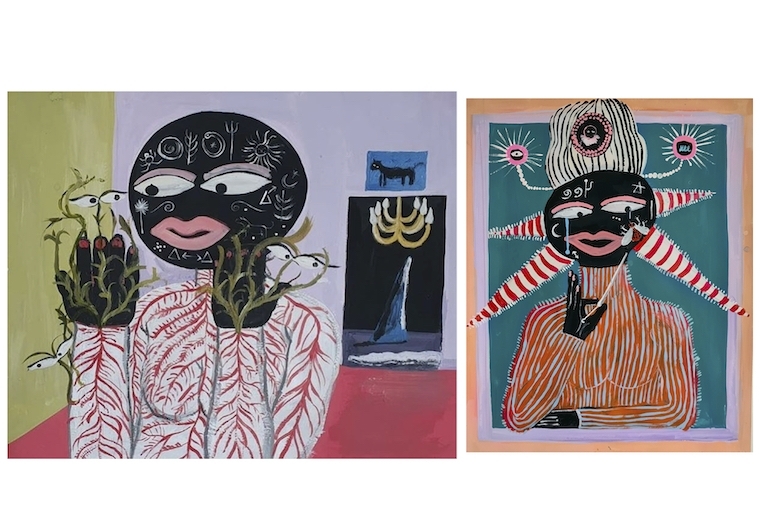 R: Please don't blame my Circular Anxiety for this!

Rithika’s body of work doesn’t possess a central subject around which the narrative revolves. It’s rather about that particular moment in time when she is creating, arrested in her art. For her, it’s about building a rather synchronic tale, wherein each vivid element adds to the mystery of her characters. She wishes for the viewers of her art to not cease engaging with the art, rather continue living on with it. For this reason, the bodies in her artworks give away particular gestures, that hint towards more — future events that they may lead to. This evokes a sense of enigma about what happens next, which is completely dependent on the interpretation of the viewer.

When talking about her process of creation, Rithika likes to call it a beautiful mess. Restless by nature, she grapples with multiple ideas at one point of time. One of the methods that helps her tackle a plethora of ideas swimming through her mind, is dabbling in multiple mediums for her artistic endeavours. She breaks it down, ‘At one moment I’ll be making colour schemes for a new painting, and the next instance I’ll move on to making a collage, or writing a quick piece that may have occurred in my mind while preparing the colours! I always have a couple of books close to me such as my Book of Symbols, Dr Seuss’ Oh the Thinks that you can think!, Borges’ The Aleph and other stories. Somewhere in the background, I have A Tribe Called Quest playing loudly. It’s a weird, colourful and elastic process, and I wouldn’t have it any other way. I usually have my studio environment filled with curious objects and old photos and cut-outs, that I play around with in the space, letting ideas brew and manifest into landscapes I could explore through painting or any other medium.’

L: The Spectrums You Hide In.

R: Here I am, lending you all my losses.

While the very act of creation may be fragmented for her, she has a set schedule in place. A steady flow of some Chopin or Solange is imperative for concentration. The disciplined manner in which she works, sets a tone of professionalism. It helps her compartmentalise work and daily life, and gives her the motivation to stop and begin again afresh the next day. The work-life balance is necessary for mental health ,but during this pandemic things have gone astray, since she’s found herself creating art at all odd times during the day.

One wonders what motivates an artist to create during a grim time like this. Rithika’s source of inspiration comes from the push and pull of her experiences. ‘I’m really interested in the process of embodiment. I’ve found myself returning to ideas surrounding the relationships between mental life and experiences lived externally, through the body, as the mediator between thinking and the act of experiencing. The ways in which we project our internal values, anxieties and subconscious hopes and fears into space that manifests into archetypes, is very intriguing to me. Our progress as a species into an age with deep cultural and technological entanglements has left us at a strange position, isolated and often wounded. I feel like we’re all experiencing some form of separation anxiety, as we confront the uncertainty of our planet and our collective future. This is a time of great reflection I’d say,’ she asserts. 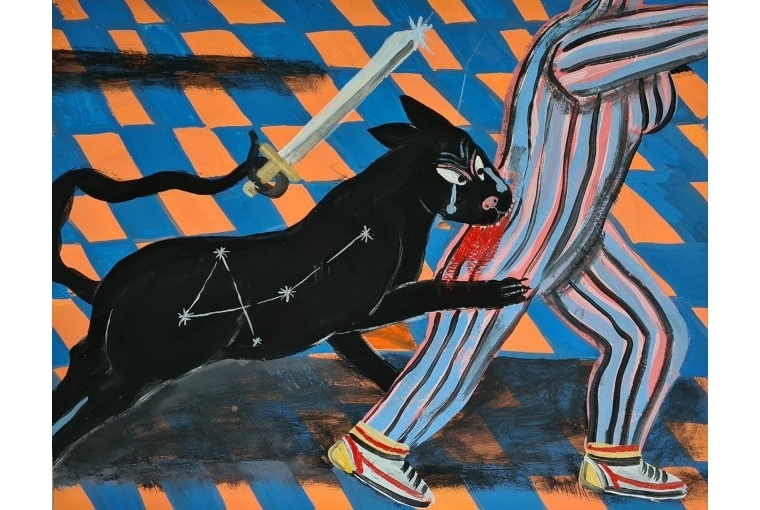 The Story where I Loved You from a Unique Standpoint

What propels her work in our contemporary reality is the drive to deeply engage with our collective history, ancestry and the impact it has on the human body and the environment we live in. The only manner in which Rithika is able to make sense of the world around her is to continue painting, keeping alive her dream of the future, and yearning for the warmth of home. The lockdown has affected her practice — it has been restricted due to a smaller studio setup. Instead of focusing on the entire body, her gaze has now shifted to the wrists and fingers. Despite the anxiety, uncertainty and other factors curbing her creation, she feels hopeful and humbled about the fact that she is working rather than not doing anything at all. Her work has kept her sane and helped assign some kind of meaning to the situation.

Talking about the future, on a parting note, she elucidates, ‘Currently, I’m in talks for holding a solo show in the next few months. I’m also experimenting with writing and images a lot more, this time working with archives and stories of my grandfather’s life, which he has so beautifully documented over his lifetime. Gradually, I’m working towards a ‘sculptural’ practice too. I am acquainting myself with new materials and techniques, while sustaining my moments of quiet reflection and healing, each day as it comes.’ 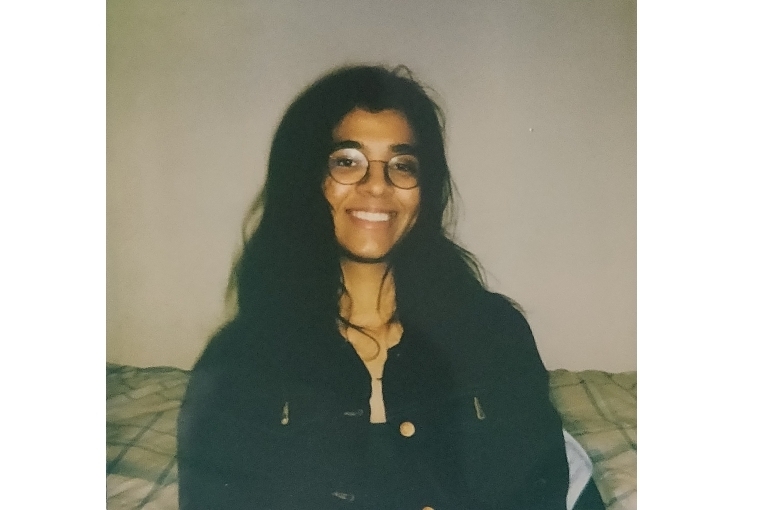