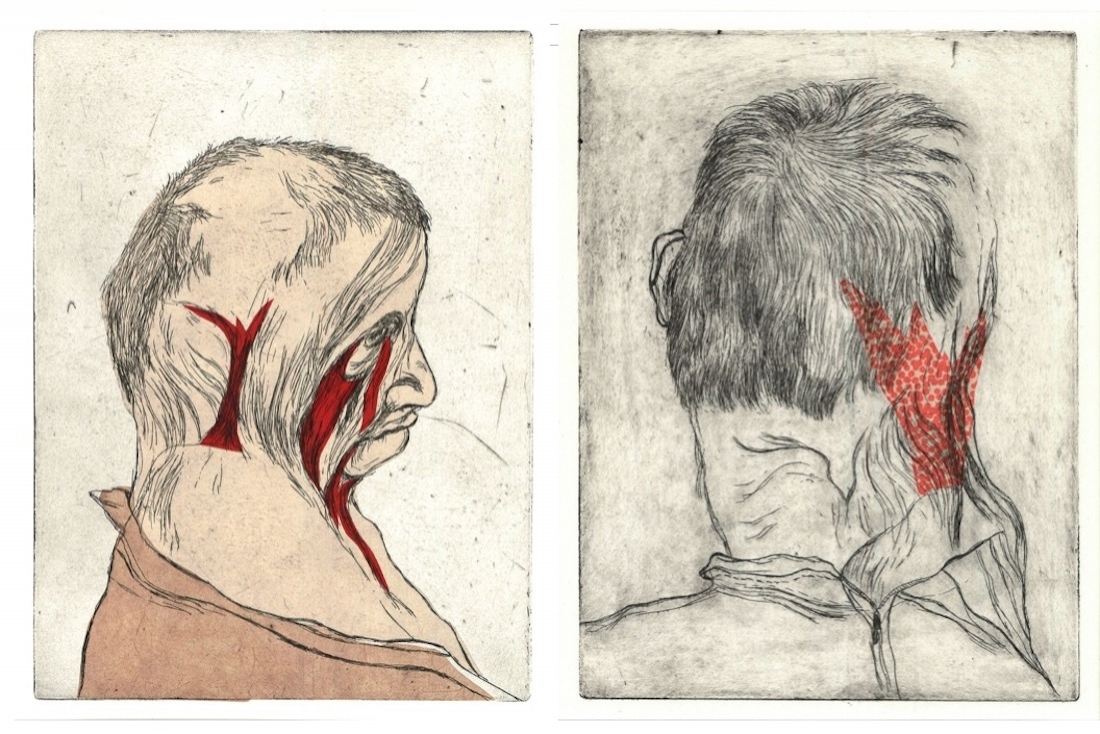 Shivangi’s love for drawing started young which led her to pursue art professionally. It was then that she discovered printmaking. Her art is raw, powerful, breaks the rules of conventional beauty and is aimed at started a dialogue as opposed to just hanging on the wall of a gallery. Her latest subject; the survivors of acid attack, whom she has portrayed eloquently in her prints, strikes a cord with the viewer, questioning our understanding of their situation, being and society. The collection titled, Has each violent revolution created another violent society? Acid Attack Survivor has been acquired by The British Museum, London.

When did you start drawing?
I love drawing, and I draw a lot. Since childhood drawing for me has always been the simplest and most direct way of expression. It came naturally to me; I would say it was my favorite hobby. All my friends and relatives bought color pencils and sketchbooks for me. My parents also encouraged me to pursue it professionally and I decided to do my BFA in Painting from College of Art, Delhi. In college, as I started to evolve as an artist, I started to explore it more intensely.

Drawing continues to provide an immediate form of expression. It is ideally suited to modern life such as being on the go and allows a greater independence from conventional studio spaces. The conceptual and the subjective, arguable the most vital components of contemporary art practice, connect in drawing more forcibly and more appropriately than any other form of art I practice.

Why printmaking and not the conventional painting or sculpture?
I did my bachelors in Painting. Only while doing that I realized that my practice was drawing based and I wanted a medium through which I could challenge the conventions of drawing. At that particular time, Printmaking suited the best and I decided to pursue my MA in this medium. Printmaking has various techniques like Etching, Lithography and Screen Print. Every technique results in a unique, beautiful kind of lines and textures. And every line expresses a different emotion.

The whole printmaking process has really intrigued me a lot. It is experimental, laborious, unpredictable and repetitive. Like life itself! Repetition is connected with meditation: I repeat the same task again and again. Sit every day in a same position to meditate, repeat the same process in trying to reach that state of nothingness. Repetition becomes a kind of force which seems to transcend and take us to another dimension. 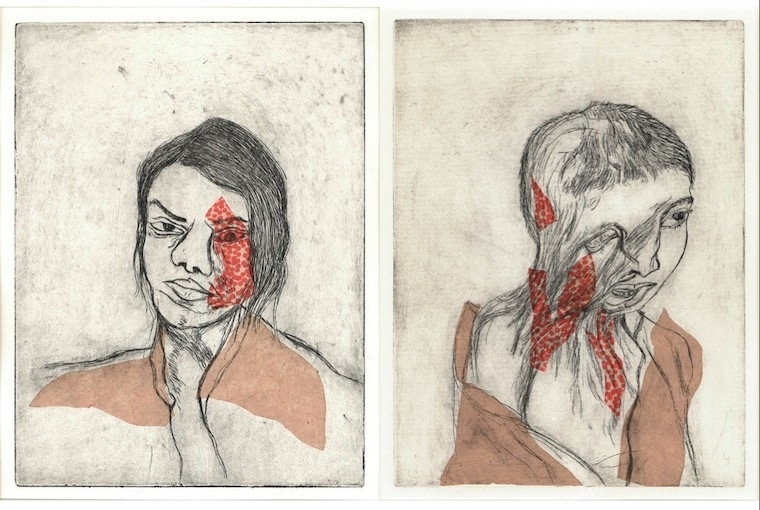 Printmaking is considered a dying art. What is the biggest challenge with pursuing printmaking?
The biggest challenge with pursuing printmaking in India is the lack of opportunities, studio spaces and lack of people’s interest in collecting prints. In 2016 when I got back to Delhi after my graduating, I struggled to find a decent printmaking studio where I could work. Unlike painting, printmaking needs a well-equipped studio which consists of an etching press, aquatint box, screen printing tables, Lithography stones, a well ventilated space which has powerful exhausts to be able to get rid of harmful fumes.

In 2017, I felt a change in the printmaking scene. Thanks to a few individuals and art lovers who came forward and took the initiative of building studio spaces for artists, with the only motive of bringing the art community together and promoting the medium printmaking. Litho Lekha in Baroda, Print Club Delhi and Artbuzz Studio, Delhi etc. are among them.

In early 2018, I myself co-founded an online platform, India Printmaker House (IPMH). IPMH’s mission is to showcase high quality, handmade prints at a fair price, making the online gallery an accessible and inviting platform. Representing a diverse selection of young students, contemporary artists and some of the best upcoming printmakers. IPMH selects a winner who shows exceptional talent for the ‘Manonorama Young Printmaker Award’ annually. The winner receives a financial award and 4 – week fully funded residency at a print studio in Artbuzz Studio, Delhi. Such platforms and spaces will assist in establishing a new foundation for all printmakers in India. It will develop and foster an environment where individuals will create works far beyond the measures of the limited potential of our minds. This wouldn’t have been possible without the support of our cultural partners Artbuzz, Parkshala and Ravi Engineering Works.

What do you wish for your art to communicate?
Millions of people around the world are dying because of war, poverty, diseases, divisive violence on the grounds of religion, politics, power, corruption and greed. There’s exploitation of wealth, hypocrisy of states, cookery of politics over human existence and the threat of our world being in a natural state of destruction. These are difficult times for our species, which is in direct result of our ignorance and arrogance of pertaining to our selfish desires. But, who is responsible for all of this?

The intention of my work is to raise awareness and spring consciousness among others about their own existence. It’s about providing others with a different perspective in the concept of identity, which is not based upon mere constraints of the mind. The true self is not preoccupied with the notions of skin color, place of birth, shape, form or gender, but flourishes a realization that all of us are the same and ‘one’ from within, which is the greatest teaching of all. The younger generation is our future, and with this realization they can dream to create a world that can be a better place for every living being to subsist in. A world without fears and walls between nations, but as one unit that accepts every individual as who they really are.

Can you tell me about your creative process?
My practice is experience-based. When I feel something strongly: it could be the feeling of happiness, anger, joy, silence, contentment, loneliness, pain, I have an immediate urge to express it. I usually carry a small sketchbook with me, where I can instantly doodle my ideas. Everything begins from there! For me art is intrinsically healing. It turns these feelings into shared stories. These feelings get handled, drawn, shaped, released, communicated and transformed into beauty. When I completely surrender myself in this whole process, then the magic happens. Spontaneity and intuition comes into play and it leads to the creation of something, which is beyond the usual human norms.

What inspires you?
Art has changed me a lot as a person. It has led me to search for the truth, the real meaning of life. I am constantly growing with it. It has given me a sense of freedom. Freedom of expression, freedom to escape from worldly things, freedom to be completely myself. It transcends me to a space where I am connected the most with myself. Through art, it is hard to not feel inspired.

You have worked on a series on acid attack victims – interviewed and photographed before continuing on to make your series. What drew you to them?
In 2017 I was travelling to my hometown Gwalior. In Agra I came across this café called Sheroes Hangout Café. This café has a lovely concept, where they hire only acid attack survivors. This way they get employment. That was the first time I saw and met an acid attack survivor in person and I was really moved by it. The first question which struck my mind was- is this real? And how could someone intend to do this? I strongly felt that I should really do something for them through my art and decided to work on it.

When I reached home, I immediately began my research by interviewing the survivors. My first interview was scheduled with Ritu Saini. She is a well-known activist and has raised her voice against this kind of violence. Initially my idea was to visit her house but then a friend suggested to instead take her out for lunch. I was looking for a setting where we both feel relaxed around each other. I wanted it to be more of an informal interview rather than serious questions so that she could also enjoy the whole process. I remember the first thing I asked her was, if she was feeling comfortable and she responded back “are you comfortable”? It was an eye opening response. Their physical appearance might be different but inside they are the purest souls, only seeking to not be judged by us and want the society to lovingly accept them back the way they are. She told me how it happened, where it happened, who did it to her, what was his intention, how she went through the whole physical and mental trauma all alone. Yes, I definitely felt very sad in the whole process but it also inspired & motivated me. Even after what all she went through, I was surprised to see the amount of positivity and will power she had. We ended the conversation with some good dessert and a photo session. Last thing she said was that nobody took her out for lunch and she really enjoyed it. I couldn’t thank my friend enough, who gave me this wonderful idea. After this experience, truly my whole perspective towards life changed!

Through my work, I began to share their stories by using acid to etch their portraits into zinc plates. With these prints, my aim was to raise awareness about domestic abuse and violence that these women faced. In these series, instead of using acid as a destructive tool, I used it as an agent of creation and tried to bring the beauty that lies within each of those individuals.