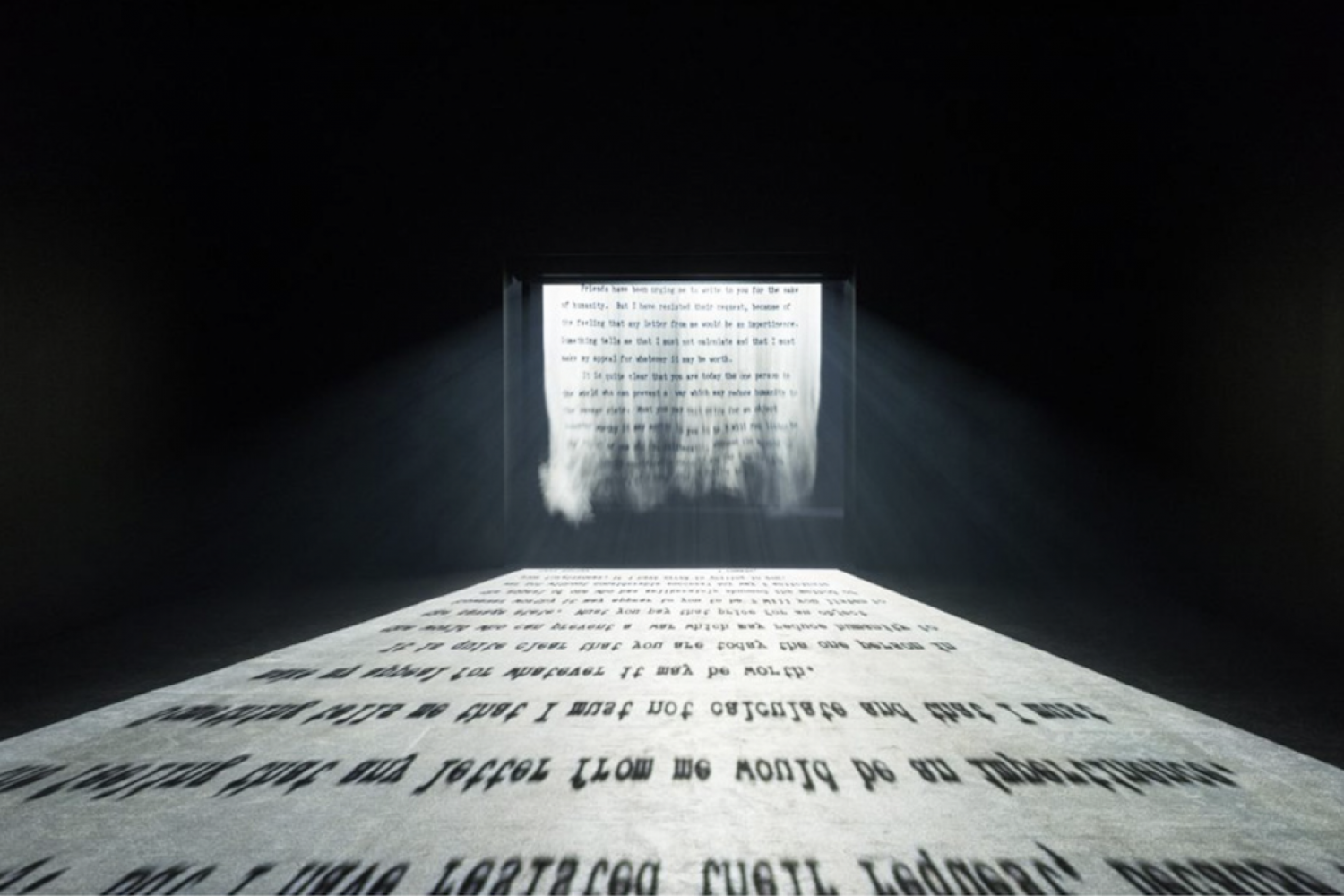 John Hansard Gallery, part of the University of Southampton, is pleased to present Tangled Hierarchy, an exhibition that centres on a collection of five humble yet remarkable used envelopes. Each envelope is addressed to Mahatma Gandhi and all are carefully conserved within the Mountbatten Archive at the University of Southampton. On Monday 2nd June 1947, Lord Louis Mountbatten met with Mahatma Gandhi to discuss the imminent partition of the Indian subcontinent, a proposition strongly opposed by Gandhi. As a consequence of Gandhi undertaking a vow of silence on Mondays, the meeting took an unusual turn. Instead of conversing, Gandhi communicated with Mountbatten via handwritten notes on the backs of used envelopes, which are now the only surviving record of their exchange. Tangled Hierarchy opens on 2nd June 2022, marking 75 years to the day since this momentous meeting.

John Hansard Gallery invited the artist Jitish Kallat to curate an exhibition which considers the Mountbatten Archive and the “Gandhi envelopes” as a reference point for a series of artistic conversations and correspondences. Combining archival and scientific artefacts, alongside works by contemporary artists, Tangled Hierarchy explores the various relationships between silence and speech, visibility and invisibility, partitioned land, bodies, and phantom pain. Themes of maps, borders, causal loops and unsettling displacement are woven throughout the exhibition. “The Phantom Limb” as a metaphor for rupture and psychological displacement recurs throughout the exhibition. Taking the eminent neuro-scientist Vilayanur Ramachandran’s Mirror Box as a starting point (a device he invented during his development of Mirror Therapy for phantom limb pain), Alexa Wright’s After Image series and the film Reflecting Memory by Kader Attia present ideas around the psychological experience of loss and recurrent phantom pain.

Displacement, especially in relation to partitioned land and borders, is examined in the works of Mona Hatoum and Zarina. In Hatoum’s installation Map (mobile), precariously suspended fragments of breakable glass form a gigantic map of the world, while in Untitled (coat hanger) a cut-up map mutates into a bag. Zarina’s Atlas of My World explores personal recollections and feelings of dislocation through the cartographic form.

The imposition of borders, along with the enforced displacement of vast populations, lie at the core of Partition. Archival material loaned from important collections, such as Partition Museum in Amritsar includes two refugee luggage trunks from 1947 which convey incredible poignancy and power as symbols of displacement and belonging. A photograph by Homai Vyarawalla, India’s pioneering first female photojournalist, shows the vote by which Partition was ratified in 1947. Alongside French photographer Henri Cartier- Bresson’s Games in a refugee camp at Kurukshetra, Punjab, shows a group of men playing at a 1947 Partition camp. They appear bunched closely together, launching themselves forwards, arms raised, bodies entangled.

Alongside Tangled Hierarchy, John Hansard Gallery is proud to present the first UK showing of Jitish Kallat’s immersive installation Covering Letter (2012). Taking the form of words projected onto a traversable curtain of cascading fog, the piece presents an historical letter by Mahatma Gandhi to Adolf Hitler, written just weeks before the start of World War II. In the spirit of his principle of universal friendship, Gandhi begins the letter with the greeting “Dear friend.” Mist diffuses Gandhi’s projected words, echoing the fate of his message, which went unheeded. Kallat describes this correspondence as a plea from a great advocate of peace to one of the most violent individuals who ever lived. It is equally an open invitation for self-reflection, as its scrolling words speak to the extreme violence in the world today.

Through the twinned exhibitions, Tangled Hierarchy and Covering Letter, Jitish Kallat revisits potent historical documents, drawing attention to the possibilities of peace and tolerance in a world plagued by aggression, control, and surveillance. Themes of violence, displacement, trauma and rupture are echoed throughout the exhibitions, demonstrating the cyclical nature of human history and how calls for peace repeatedly go unheeded.