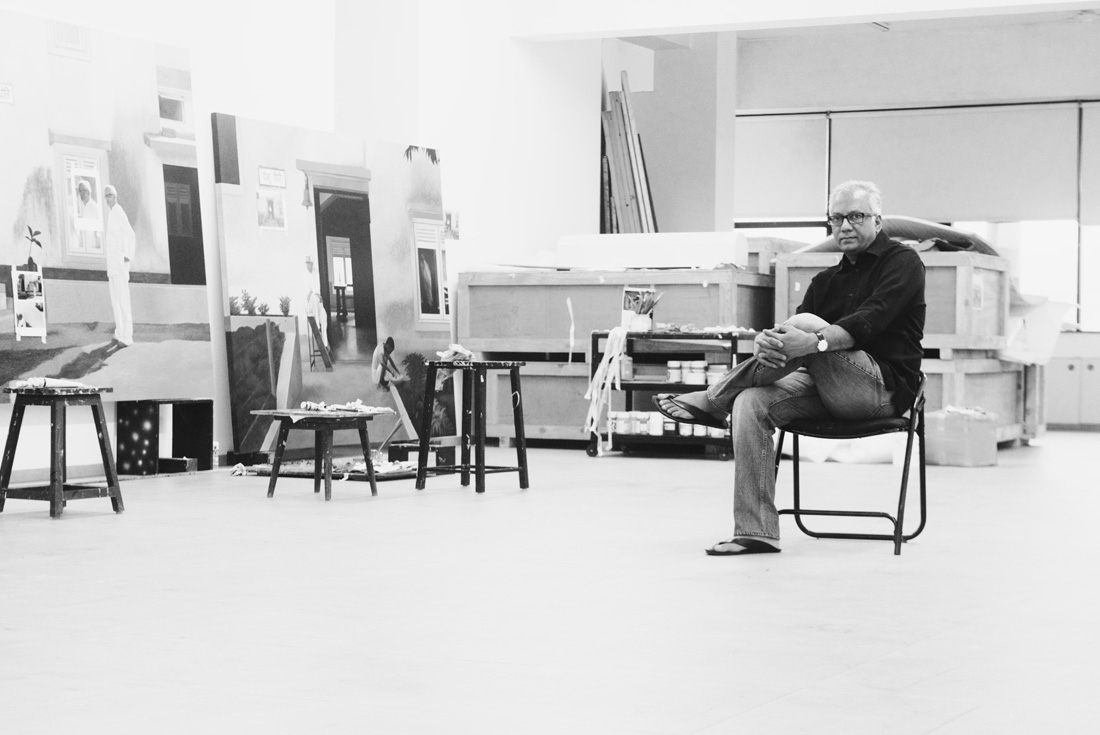 It is seldom that you meet someone who had decided his or her life’s path at the age of 10. An art assignment (in 6th grade), to draw a boy kicking a football was the realization point for one of India’s most celebrated artists, Atul Dodiya. He achieved the light and proportion of the image to the minutest detail, and handed over an assignment that was exactly like a portrait. After that, he became a ‘boy possessed with drawing and painting’ that was the starting point and resulted in ‘utter madness and passion’ that he feels till date.

Over the years, Atul, unlike many of his contemporaries, has experimented and explored many diverse paths and has embraced various mediums - be it oil, watercolors, acrylic, charcoal, canvas, paper, fabric, print or even installations - it purely shows that he doesn’t want to be constrained. It is this ability to experiment with various mediums aesthetically and to be able to infuse a strong sense of both the history of Western art and popular culture of India that has made Atul one of the most distinguished artists in the country.

You began painting at a very early stage in your life. What were your greatest influences while growing up?

Paintings, cinema, literature, poetry, short stories and music of the ‘50s and ‘60s were going through a golden period, and I was greatly drawn towards it. And exactly at that time I started watching movies on Doordarshan. There was a cinema-friendly atmosphere at home. In the ‘50s and ‘60s, my parents would watch and talk about films. I started watching meaningful cinema, not just popular Bollywood films, but movies by filmmakers like Satyajit Ray, Ritwik Ghatak, Kurosawa, Fellini Bergman and Godard. This early exposure to the world of great filmmakers and their work inspired me greatly. Along with that, I started reading literature, of course mainly in Guajarati, which is my mother tongue. I think all this together reinforced my creativity. And what was easy and at hand, was a pencil and a piece of paper, which was always available at home. If you want to do photography, you need a camera, but for a painter, all you need is a piece of paper and pencil and you could start drawing. So that’s how it all started. Since I was interested in painting, I was looking at Indian artists. My parents were very encouraging as they could see the passion in me, so they would buy me a first class pass to go from Ghatkopar to VT station to Jahangir Art gallery, Chemould Art Gallery, to see other people’s work. So very early in life, before I went to art school, I was familiar with masters like Pablo Picasso, Matisse, Cezanne and Van Gogh. 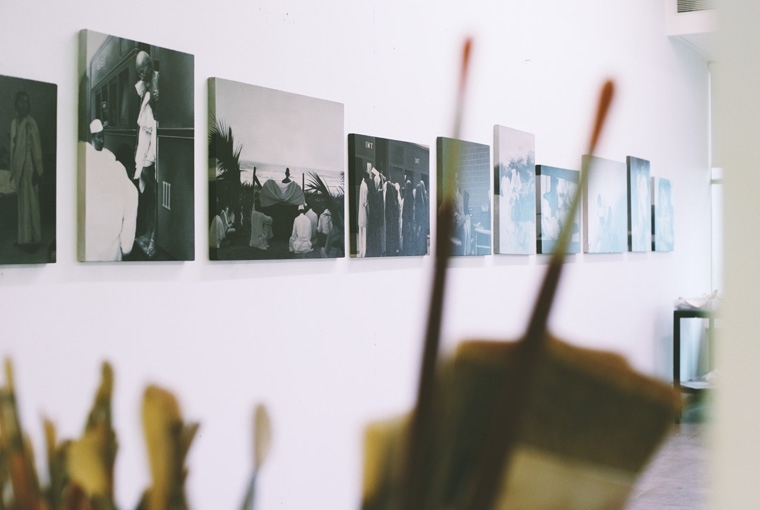 I read somewhere that your art has roots in other arts. Where do you get your subjects from?
I was looking at all kinds of art as a young boy. From greeting cards, decorative drawing of females holding a lamp to masters like MF Husain, to oleographs of Raja Ravi Verma and Maharashtrian artists like Mulgaonkar, Dinanath Dalal, and S.M.Pandit. My first exposure to art was oleographs of gods and goddesses (my mother was very religious, therefore we had lots of pictures of deities in our house), along with posters of Hindi films, which were hand painted those days. Whenever I would go from my suburb towards town, I would see the posters and the large banners and be very fascinated by them. I would look at art so much that even as a young boy when I would aspire to do something, like [paint] a landscape, I would think of Van Gogh’s landscape. If I would think of doing a still-life, immediately I would be reminded of Cezanne. When I joined art school and studied the history of art, I felt that while painting a certain image, it reminded me of someone else’s image and that always got incorporated in my work. So I referenced other people's work. As a young boy, I used to copy Van Gogh and Picasso’s drawing. I still do that today, and I enjoy when I reach that lightness of an image, as it results in a specific meaning. There is a significance already associated with Picasso’s image for example, but I take that context and use it in a completely different milieu in my painting giving it probably another meaning.

You have explored various mediums. How do you decide which path to take with your subject?
There are two worlds for me, one is the world where I live - in India, in Mumbai, in this north eastern suburb where I was born and brought up - I still live here in Ghatkopar - so that is one life, and the other is the art world. I love everything and I feel that within a single me, there are many me, and I should allow all those voices to come out in my work. I don’t have a singular style; I have a dramatic shift in each of my solo shows. Each show in the last 12 years has varied in medium, concept and content. You don’t have to have a style. Sometimes I doubt myself as when I see a great artist, I see a linear growth, which becomes deep and dense and ultimately has a profound feeling. In my case however, before I arrive somewhere, I take somersaults and go into a different zone. However, I have a grip over the medium, whether its oil, colour; whether it’s a painting on a rolling shutter, creating cabinets or something else. I understand very quickly the limitations of each medium and then I am able to probably depict and convey what I see from inside. I am like a free bird that has the sky to fly in. So I do not like to be ruled, bounded by a gallery, by the market, by money, or by fame as these things are very bad for creativity -- they restrict the creativity. Due to that, there is an immense amount of agony and pain, because every time when I try to do things differently, you have to understand why, how, what, is it logical, not logical? One goes through profound amounts of pain and struggle, but ultimately, there is a profound joy within and this joy matters a lot to me. Essentially I love painting. After reading the great artists, I understood their work. In 1991, I went [outside the country] for the first time, I was awarded a scholarship in Paris. There I saw the original paintings of the artists for the first time. I would go to the Louvre at times to just see one single painting. I had a student pass and had free entry and every time I went, I was left mesmerized by their work and felt one should not be afraid of experimenting. I was living in Paris in the Marais area, 7-minutes away from the Picasso Museum. I saw that this man has done so much in so many different ways and he has approached every portrait of his differently. He would not repeat himself and that encouraged me to take full liberties with my work and do what I felt like doing. My one-year stay in Paris was extremely important in my career, because when I returned home I said I would do what I like. If there was a fantastic SMS joke, I would paint that too, I would also make paintings of Mahatma Gandhi, I would also talk about the injustice, which happens in this country towards women. So I think social, political, poetry, cinema, music including the visual - everything seeps into my work. Everything is a part of me and can be a part of my work. The city of Mumbai is also very important to me. 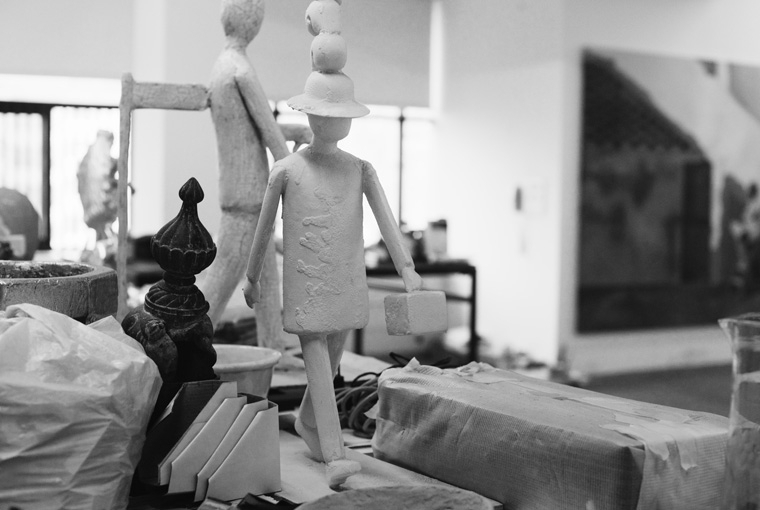 “I think social, political, poetry, cinema, music including the visual - everything seeps into my work. Everything is a part of me and can be a part of my work. The city of Mumbai is also very important to me.”

Yes coming to that, what is it about Mumbai that inspires you?
Mumbai is a vibrant city. It’s a metropolitan in the true sense where though it’s a part of Maharashtra, you find people from South, North, West, East and Central. It’s a real amalgamation of communities. So many diverse situations, emotions and feelings coexist in Mumbai. We also say that it is the financial capital of the country - people come here to earn money. It’s true when someone comes from North, he gets a job and people survive. The tempo and kind of atmosphere is vibrant and moving. Originally my father came from Saurashtra in Western Gujarat in 1938, so my sisters and I were all born and brought up in Mumbai. I speak fluent Marathi, however Gujarati is my language and English and Hindi too. In a suburb in a middle class milieu or in a lower middle class community, you have a different kind of access to life than one would have in our class. For example, when I exhibit in South Mumbai, the kind of people who come there for the opening and those who acquire my work are familiar with my work but that is not the case necessarily where I live. And this gives me another way of looking at life and how you and your art is not the only thing in life there are many other aspects to life. So all this is what the city offers me.

This is the first time that you are exhibiting as a solo artist in the NGMA - what is your story this time?
We are not calling this a retrospective. It is a major survey show of my work during my art school days and we have selected few works from a later period as well. Author and writer Ranjit Hoskote is the curator of the exhibition. He will conceptualize the whole show and he will write the concept note as well. We have limitations on the amount of paintings that we can show therefore, he will design the exhibit and how the paintings are to be displayed, what should be included or not. He is quite an authority on my work. We are also working on a major book, which will be launched in September, which has been published by Prestel [German publishing house] in collaboration with the Vadehra Art Gallery. It is a truly mammoth book and there are four writers, curators and an editor on the book. The shows that happened in 1984-85, works from that show will also be exhibited. Only the people of that period know the work and back then the audience used to be small. There were fewer galleries in the country and only few people were collectors therefore, those works we will collect from collectors and they will be displayed too. It will be a treat to those following my work or those who liked my early work, the early realism and my in between change of styles.

Our conversation with Atul Dodiya was first published in our Design Issue of 2013. This article is a part of Throwback Thursday series where we take you back in time with our substantial article archive.

On display at Method, Kala Ghoda, the artist uses his own body to take body prints with the help of soot (lampblack).

Poetry of Lived Spaces:A Brush with the Lens

Artspeaks India presents Poetry of Lived Spaces, A Brush with the Lens – a virtual exhibition of photography curated by Georgina Maddox.

The Shape Of Home

The show brings together a careful selection of artworks by artists Dileep Sharma, Farhad Husain, George Martin and Pratul Dash.