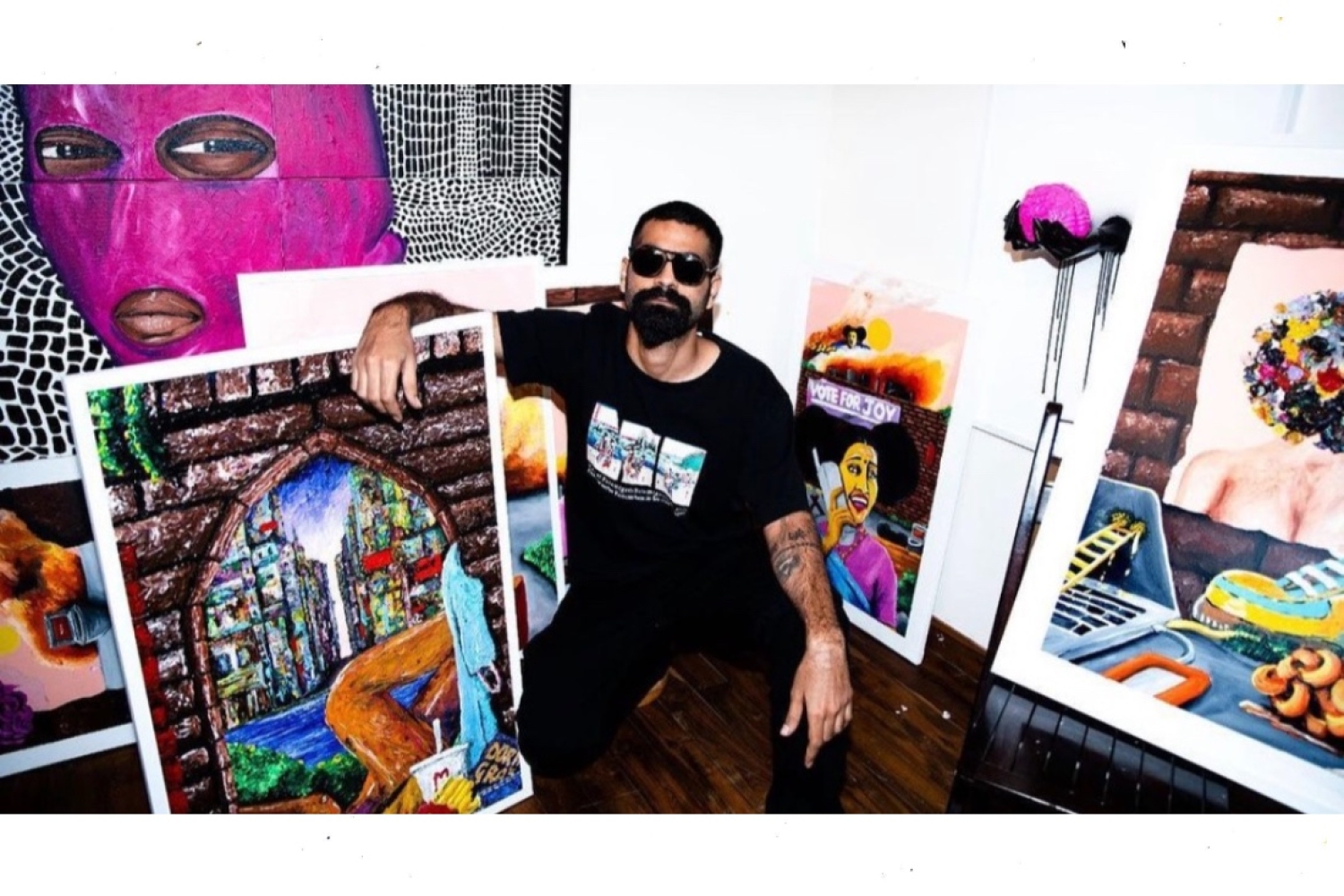 An artist with a method to his madness and a discipline to his art, despite its chaotic elements, Toosid represents art in its rawest form. Traversing through mediums and expressions with humour that is easy in a world of solemnity, he has established himself as a fluid and versatile artist who can deliver without selling out.

We speak to him to know more about his journey and what’s next.

What had been your artistic influences while growing up?
I grew up around music — album art and covers were my first point of visual references. A friend of mine once gifted me a box set of five hundred rock and roll albums, so that became my education in visuals, and music. In hindsight, the biggest visual influences on me have been the middle class localities of Delhi — with their congested streets, electric poles with their entangled wires, and bright neon signs. Unintentionally and subconsciously, all these visual references showed up in my 3D work.

Another influence that informed my visual humour was how bad graphic design in India was then. There was always a tilt in handwritten designs on the back of tempos, which, more often than not, had typos. Just the raw nature of design that was poorly executed but still communicated the message had an honesty to it that stayed with me. This is why I don’t finesse everything visually — it always has some authenticity.

You’re probably the first to elevate ‘Dad’ jokes and puns with visual effects and animations. Was humour always the direction you wanted to head in with respect to your art?
I take life lightly. I’m the kind of person you would find laughing at a funeral. In all honesty, life itself is too serious, but if you notice, our lives are funny as well. We try to find logic in everything, but just the way everything operates isn’t always logical. Which is why, everything I work on ends up being funny, even if I don’t try. When I do something serious, it’ll still come across as hilarious. I think it's just the lens I take on life. Also, every post of mine is a cultural and social archive. I’m abstractly emoting in response to my own life or the circumstances around all of us. So really, I’m finding the moments of laughter in this rat race of which we’re all a part.

Is your creative process dynamic and chaotic, or do you meditatively envision your work before you begin?
A bunch of years ago, I decided I won’t base my art on inspiration, rather I will centre it around the process of creating. So every morning, after my daily chores, I turn my computer on regardless of if I have work to do or not. I make it a point to work for eight to ten hours everyday. Sometimes, I look at something and get an immediate idea. but there are times when I'm trying to connect the dots but nothing will come of it. Even then, I try not to think of the output. I focus on just turning my computer on and creating something — I’ve conditioned my brain to be free and create.

What’s it like exploring so many mediums in art?
So many mediums I’ve played with have happened out of necessity rather than choice. Ten or twelve years ago, I made an art installation out of plastic bottles, and a guy approached me to do art direction for an ad film. I had never done it but I went ahead and tried it out. Another time, someone told me they’re working on creating a gaming lounge and needed an interior designer, but didn’t have a budget for it. So I also designed his interiors for him, free of cost. The most fun creative avenue right now is UX design. I love 3D because I can create worlds with it. But with 3D design, once you’ve envisioned what you want to make, the rest of the process is just donkey work, it’s operational. Whereas, in UX, once the skeleton of the project is established, the creative work emerges. It's much more immersive and hands on, with consumer psychology coming into play. So, in the coming years, I feel UX designers are just going to grow more important.

As someone who has been creating for over twelve years, how do you think has the Indian art landscape evolved over time?
The Indian art landscape or art scene is not quite concrete right now in this digital age. The Indian audience considers all by-lanes of art equal — painters, puppeteers, et cetera. Popularity and monetisation is your best bet as an artist. But not enough artists have come together and legitimised themselves as a ‘scene’. Or maybe they have and I’m just not a part of it. However, I feel designers in a corporate framework are restricted monetarily — they reach their roofs quickly. In that case, I anticipate more designers to surrender themselves into being artists. Their future is in art, just the pace of it depends on their privilege. I had to work in the industry for ten years, whether it was for agencies or brands so that I could establish myself as an independent artist who can live off of my creative work.

Do you think NFTs and Meta-Art can stand the test of time and capital?
NFTs and such are definitely here to stay. They’re all young and testing things here and there, but it's a new medium and should be treated as such. There is merit to it, especially for artists who can set their own terms and also see where their profits are going, which wasn’t possible earlier. It's similar to merchandising, even if it doesn’t get you tremendous revenue, it's a medium that is ready to be explored. That being said, it's enough right now to just observe and spectate the space to learn about it rather than to leap into it.