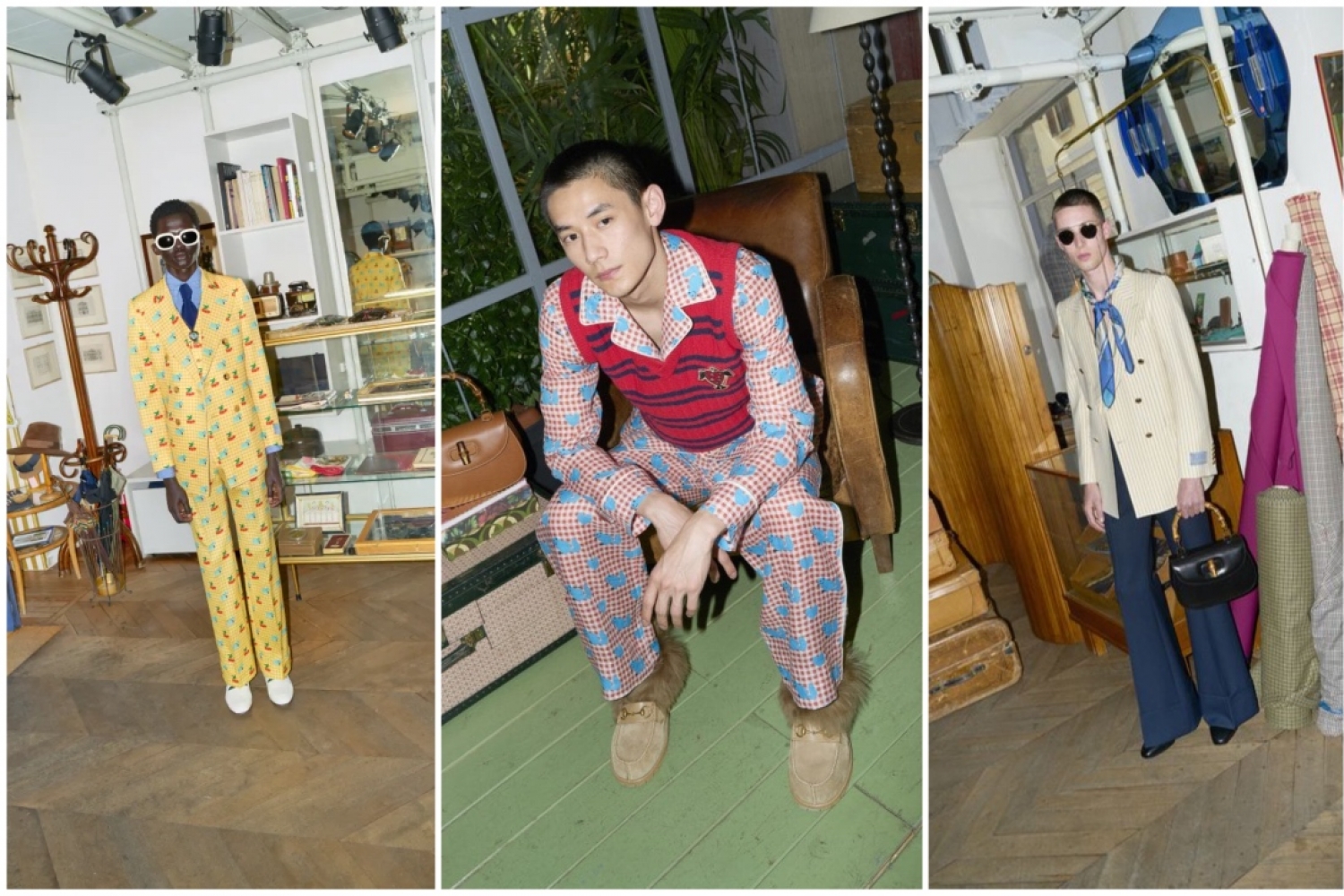 Friendship, complicity, a unification of distinct creativities that meet along a shared border, exchanges, and contaminations of collective ideas. And the construction of the absolute pragmatism of bridges that form to connect different perspectives. Gucci HA HA HA is a collection that represents the landing place of an inventive two-person journey, the synthesis of a friendship between Gucci’s Creative Director, Alessandro Michele, and the British singer-songwriter and actor, Harry Styles.

Gucci HA HA HA is not only a printed motif on a label, but the beginning of a jargon that has yet to be categorized and that defines the intersection of creative expression and shared perceptions of two different consciences: this is why it is a collection born from a creative relationship that self-generates from amusement and ends with the tangibility of a product. HA HA HA is the serial crasis of the initials of ‘Harry’ and ‘Alessandro,’ but it is also the onomatopoeic sound of the written essence of an emoji, the ‘laughing face.’ In fact, it is with this neological expression, ‘hahaha,’ that Michele and Styles have ended their messages to each other for years; two friends who find themselves sharing trips, experiences, and even those suspensions in time that are shared spaces in silence. Their relationship is one of complicity that allows for continuous exchanges because it recovers the true moral meaning of friendship: a sincere revelation and dedication of oneself towards the other, without duplicity and displays of power.

Alessandro Michele and Harry Styles met each other many years ago, right at the beginning of their careers as soloists: Michele following his debut as Gucci’s Creative Director and Styles just as he released his first album. The encounter immediately generated a relationship of exchange, of continuous creative contamination, and the drive to explore.

“Harry has an incredible sense of fashion. Observing his ability to combine items of clothing in a way that is out of the ordinary compared to the required standards of taste and common sense and the homogenization of appearance, I came to understand that the styling of a look is a generator of differences and of powers, as are his reactions to the designs I have created for him, which he has always made his own; these reactions restore me with a rush of freedom every time. The idea of working together came to me one day while we were talking on the phone: I proposed creating a “dream wardrobe” with him, starting from those small oddities that come together in childlike visions. We ended up with a mix of aesthetics from 1970s pop and bohemian to the revision of the image of the gentleman in an overturned memory of men’s tailoring,” says Alessandro Michele of an endeavor that connects two “I’s” to obtain an absolute “us” in which each resulting element is a plural creation that highlights the contamination of ideas and produces a singular organism.

Gucci HA HA HA is a playful collection designed to act as a herald of new visions of beauty, crafted with liberating codes that eliminate the ritual complexities of fashion collections and produce the sustainable spontaneity of ease, just as nature is easy even when it expresses itself with the vision of complexity. Jackets, coats, pants, shirts, and accessories that manifest a novel emotive passage able to construct a study on a surprising take on masculine elegance with clothes that declare their love both to the materials with which they are made and to the historical significance of their forms, volumes, and of the images they produce. A dialog, a game, the complicit expression of a friendship that was formed from a planning that collects encounters, stories, similarities, and differences, to produce liberating codes.

Gucci HA HA HA therefore is an imaginative connection between Alessandro Michele and Harry Styles and gathers within a collection many elements that characterize the creative paths and peculiarities of the two artists, bringing them together in the synthesis of Gucci. Elements of English tailoring transformed in romantic accents from a new meaning of masculinity through the eccentric use of Prince of Wales check to create double-breasted coats, the essential preeminence of artisanal processes seen in the construction of jackets or in the details of covered and mother-of-pearl buttons of shirts. An artistic imagination that comes from creative instances that apply themselves to diverse expressions contaminate each other and become clothes that highlight formal developments of the historical significance of menswear: this is why alongside sartorial suits, treated denim jackets, and velvet suits in irregular hues, are unexpected printed pajamas and bowling shirts, lined coats with hoods and frog fasteners, and pleated kilts with leather regulating straps. All to underline the continuous acknowledgements of two creativities in each design that comprises the Gucci HA HA HA collection.

Co-founders of the label Tappa, sibling duo Tarveen Kaur Vohra and Jasjyot Singh, tell us all about their recently launched endeavour.

Return of the Y2K

A Platform edit of fashion labels that are embracing the Y2K aesthetic.

In conversation with Anju Modi about her new collection, inspired by her travels.

The designer speaks to us about the new collection and more.

We catch up with Aneeth to know more about the label’s thirteenth year celebration, amongst other things.

Founder of the label Aab, Shreya Mehra, tells us more about their Phulkari revival.