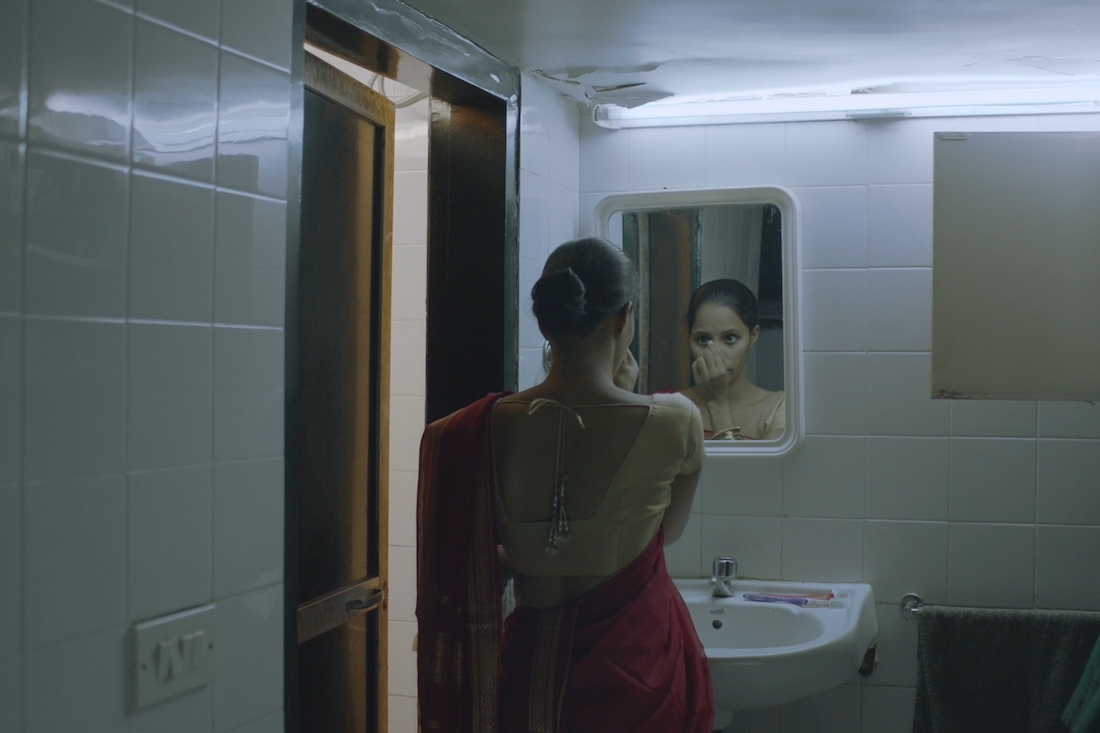 Lata, a 23-year-old domestic worker, navigates her way through an upper-class home in South Mumbai. Doors consistently open and close, giving Lata selective access to the various contending realities that occupy this space. One might think that the premise of this short feels rather familiar, almost mundane. However, the film captures that liminal space between the familiarity and unfamiliarity of such a situation and translates it masterfully on the screen. Alisha Tejpal’s debut short LATA, which recently played at the Sundance Film Festival, is a quiet yet haunting visual experience. Not much is said, and the camera stays stationary in almost all scenes as we see Lata be both an insider and outsider. We are in conversation with Alisha to know more about her journey as a filmmaker and LATA.

Why did you venture towards the world of filmmaking?
I’m not sure if I have a direct or coherent response to this! I do remember wanting to be in and around the cinematic arts since I was a kid, but I suppose I arrived at cinema in a convoluted way. It is one of the many fragments of my life that, when pieced together with the other fragments, makes a cohesive whole. I have an undergraduate degree in Transitional Justice in Post Conflict Societies from Grinnell College, IA. After my undergrad, through a series of serendipitous events, I ended up studying large format photography and painting at the Aegean Center for the Fine Arts in Paros, Greece. In many ways I owe a lot of my transition to cinema to my time spent at this incredible place!

I studied painting — quite specifically focused on classical and renaissance painting techniques — under Jane Pack and I remember knowing quite early on that I didn't have what it took to be a painter. I loved every minute of it but the canvas and the brush was not my medium. But images and the frame beyond the canvas continued to mesmerize me. I think it was at this point, after four years of fighting with the paintbrush, that I decided it was time to try my hand at the moving image. Though, I do think that my interest in both politics/human rights and painting have come to deeply inform my work as a filmmaker. They found a happy union in the moving image.

If you had to define for us your cinematic sensibility or practice, how would you?
Early in my career at CalArts, where I received my MFA in film, a close friend and fellow filmmaker sent me an article titled ‘Cinema and Its ghosts: An interview with Jacques Derrida’. There was a quote in the article: “You go to the movies to be analyzed, by letting all the ghosts appear and speak. You can in an economical way let the specters haunt you on the screen.”

This quote has haunted me ever since. In many ways, all of my work is a gesture towards ghosts — the ghosts that lie beyond the frame, the ghosts that occupy the spaces in between what is seen and not seen, the ghosts of histories past. What is seen and not seen are not organic states of existence, rather political choices that we live with and within every day of our lives. My work varies in form from experimental, essayistic and docu/fiction hybrids, but their commonality lies in their investigation of the invisible. So my cinema is in many ways a gesture towards making visible the invisible — off-screen sound, spaces as characters, the collision of inside and outside worlds — these are all elements that I’ve come to realize dominate most of my work. My own work and process is deeply observational. In fact my partner, who is also my closest collaborator and producer, was the one to first notice this. She said I spend months, if not years, observing things and then the day I decide to shoot I know the space so intimately that I can tell you where and when the shadows will show up! I am not a fast maker at all. 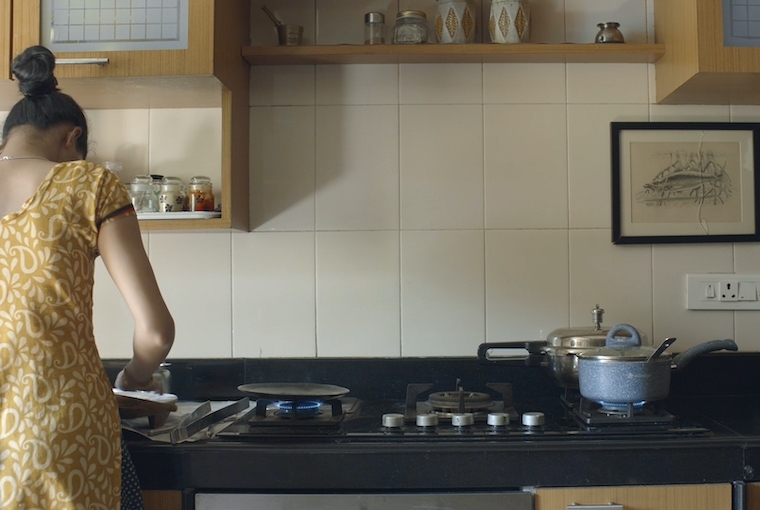 What inspired the making of LATA?
LATA was also born out of this same obsession, an obsession with unveiling ghosts. In this case, the ghosts that have surrounded me for most of my life. The ghosts of my native languages that I can read, speak and comprehend but will forever be shadowed by English. Of figures whose presences have only been felt in the labour they perform in and around the spaces I’ve occupied.

While LATA was in many ways a formal exercise, it was also a deeply personal one for me. It is a subject matter that we see everyday and that is as much a perpetuated construct that we (the upper, privileged classes) live with as it is a systemic problem. LATA was in many ways the intersection of my aesthetic questions with my political ones.

Could you please take us behind your creative process behind the making of this film?
This film was a slow churning process. It was my thesis film at CalArts and as one would expect of a thesis program, the maker I was when I entered the program was very different from the one that emerged by my final year. I started to develop this project early in my second year, back in 2017. At first, all I knew was what I did not want to make, all the other components were a question. I had graphs and rules laid out for the process of making this film but no real story or characters. The process of writing this film was as much a process of questioning my own ethics around making work that puts power, class and caste dynamics at its centre, as it was a creative process to find my cinematic voice and piece together this new language.

From its inception, LATA straddled the spaces in between documentary and fiction. The film is more of a re-enacted document. My producer and co-writer, Mireya Martinez, and I spent weeks observing my apartment building, watching as scenes unfolded. We crafted a script out of collected moments, constantly aware of the liminal space in-between us as recorders of reality and the unfolding of reality itself. This observational process also deeply informed the structure of the film. The composition is meticulously controlled, infusing the film with a self awareness of its own creation, of the deeply constructed nature of ‘realism’. 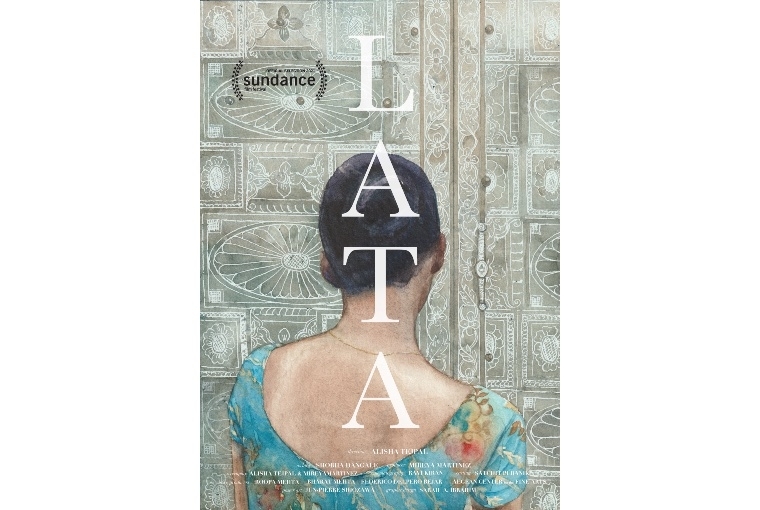 What were some of the challenges you faced with the making of LATA?
There were so many challenges, or what felt like challenges, when we embarked on the journey of making this film, but now they seem so distant that it’s hard to list them. For one, both Mireya and I had no real contacts in the Indian film industry but a very clear vision of what we wanted our set to feel like. It took months of meeting people and blindly trusting that we would encounter the right humans and ultimately we did. Then there were all the challenges that come from being independently funded and having a minuscule budget by industry standards.

And of course, there are last minute things that come up while shooting. On the day we were filming one of the final scenes which contained the most extras, including a group of musicians playing the dhol, a famous politician died and his house was right next to the location where we were filming. Ultimately we got the shot, but for a few hours it was a lot of scrambling to find the best way to film without being shut down entirely. But we did have two cops come by and request to speak with the man in charge! Unlucky for them, both my producer and line producer, Monali Bhardwaj, were women.

Lastly, how have you been coping with the pandemic and what are you working on next?
The pandemic has definitely been a time of both crisis and introspection. In some ways I’ve been very fortunate during this time as LATA has found a home at a few festivals and even played on a theatre screen in San Sebastian! The hardest part of the last year for me has been my inability to return home. It has been emotionally difficult to be so far away from home at a time as crucial as these past few months have been and continue to be in India. Currently Mireya and I are working on a feature that deals with the same topics as the short film. A feature length documentary that dives into familial archives and also on a very different note, a queer romcom that explores coming out later in life.