THE FILMMAKER
Wanphrang K. Diengdoh’s journey towards becoming a musician and image maker has been rather eventful. He was introduced to both music and films very early on in hischildhood, which he spent in Shillong, Meghalaya. Right from his grandfather, a retired cashier at a grocery store, bringing VHS tapes of Hollywood films every evening, to thearrival of cable television; cinema was omnipresent in his life. In 2001 he left Shillong because of the general sense of anxiety regarding militancy and other secessionist related activities prevalent in the region. “I landed up pretty much all over the country and was exposed to an environment where I was now the ‘other’. It was an eye opener to say the least,” he tells me. Despite the upheaval, he played music all throughout this period of time and met wonderful people who filled him with amazement. At some point, he found himself on a Delhi bound train with a group of friends from Shillong who had managed to convince him to sit for the Mass Communication entrance test at Jamia Millia Islamia.

After his two year degree, he started working on a fiction film. “I remember walking into the room of a local entrepreneur one day and literally telling him that he needed to produce this film. The money requested was a pittance. We shot the film on a Sony Z5 that belonged to our actor, who also co-directed the film. We didn’t have a crew to begin with and a bunch of friends volunteered to act. When I finished filming, I edited the footage on my PC at home. Needless to say, it crashed frequently and I would have to take it to Police Bazar in the heart of town to get it fixed,” he says about the piece that ended up winning the award for Best Film, Best Screenplay and Best Cinematography at the first Guwahati International Short Film Festival, the first of multiple critically acclaimed films and music documentaries. This was only the beginning for Wanphrang, who eventually went on to becoming the founder of Red Dur, a production space for films and music.

THE SENSIBILITY
As music is a significant aspect of his artistry, it also finds itself in his filmmaking sensibility. He writes music the way in which he would write films and he writes a film as though creating a melody. “The rise and ebb, the rest, the silences; these are attributes that are common to both forms. Also the streets of Shillong constantly inform my poli- tics, my lyrics, the dialogues of the film and the characters in all my works. But the thread that binds all of my works is of course the ethos and philosophy of the Khasi people and the Khasi language."

THE FILM
In his first feature length fiction film, ‘Lorni - The Flaneur’, Shem (Adil Hussain), an out of work, self-styled detective with a sharp sense of the streets, escapes the lethargy of small town Shillong when he is asked to investigate the disappearance of a ‘paila’ - a coral necklace of great cultural significance for the Khasi people. Navigating narrow streets and dark alleys, he embarks on a soul stirring journey, reflective of his reality and that of Shillong. Like the quintessential flaneur, he manoeuvres the real and the imaginable to further complicate the personal, the political and the emotional. Shem allows a glimpse into the realities of an indigenous society confronted with modernity and the implications it has on contemporary society.

Shillong is a rather important character in the film and intentionally so. “I owe Shillong everything that I have learnt in life. I have lived here almost all my life and have a love-hate relationship with it but I guess that’s also healthy. It has taught me so much that no university or school or the countless number of books or films will ever match up. At the end of the day, I think it also has to do with my constant effort to know more about the history of this place and the people and to be able to document these stories in my films, my music and my poems, without trying to romanticise or eulogise or be moralistic about things,” says Wanphrang. 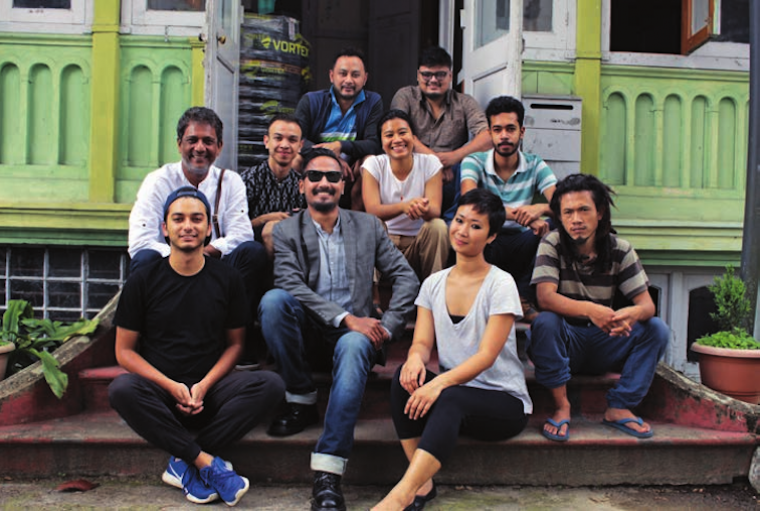 THE PROCESS
The film was initially supposed to be a graphic novel. “I went for a small breather to Goa shortly after I had finished making Because We Did Not Choose, a documentary on the participation of indigenous labour during the First World War on which I had spent four to five years. I carried with me a draft of a graphic novel idea that I had started back when I finished my masters from Jamia. The graphic novel project was shelved for various reasons but I had always wanted it to become a film at some point. I sat down and finished the screenplay in approximately two weeks and was thoroughly excited to start this new filmmaking venture because it was going to address the subject matter in a visual stylethat I had always dreamt of.”

A month after the screenplay was written, he held an audition and handpicked the entire cast. However, Wanphrang could not find anyone who remotely looked the part of the lead role. He reached out to Adil Hussain to see if he would be keen on conducting the acting workshop since most of the cast consisted of first-time actors and received an extremely positive response. “I had interacted with Adil once or twice before this but it was very brief so I decided to meet him in Delhi to discuss what the film was about etc. We met at Café Turtle in GK and spoke at length about what I intended to do with the film, the treatment, the style, the concept of it all and the music. It was a lovely meeting to say the least and just as he was about to leave, he asked for a copy of the screenplay.” Wanphrang heard from Adil within the next few days, with him expressing the desire to play the lead role in the film. The entire film was shot in twenty four days with a small crew and limited resources, but the involvement of a great line production team, headed by Tyrel Lyngdoh, made it easier for the filmmaker. He also collaborated with Hammarsing Kharhmar, conscious of the fact that the imagery asked for a certain kind of music, which only Hammarsing would be capable of evoking sonically.

THE FUTURE
“I am currently filming in the midst of this pandemic. It has been challenging keeping in mind all health and safety regulations and crew sizes. Thankfully, I have a bunch of people who are so committed to their craft that they are all on board with the project. It’s another fiction piece set around the pandemic that has sprinklings of all the essentialelements one would associate with my works,” says Wanphrang.

This was initially published in our November Bookazine. To read more grab your copy here.