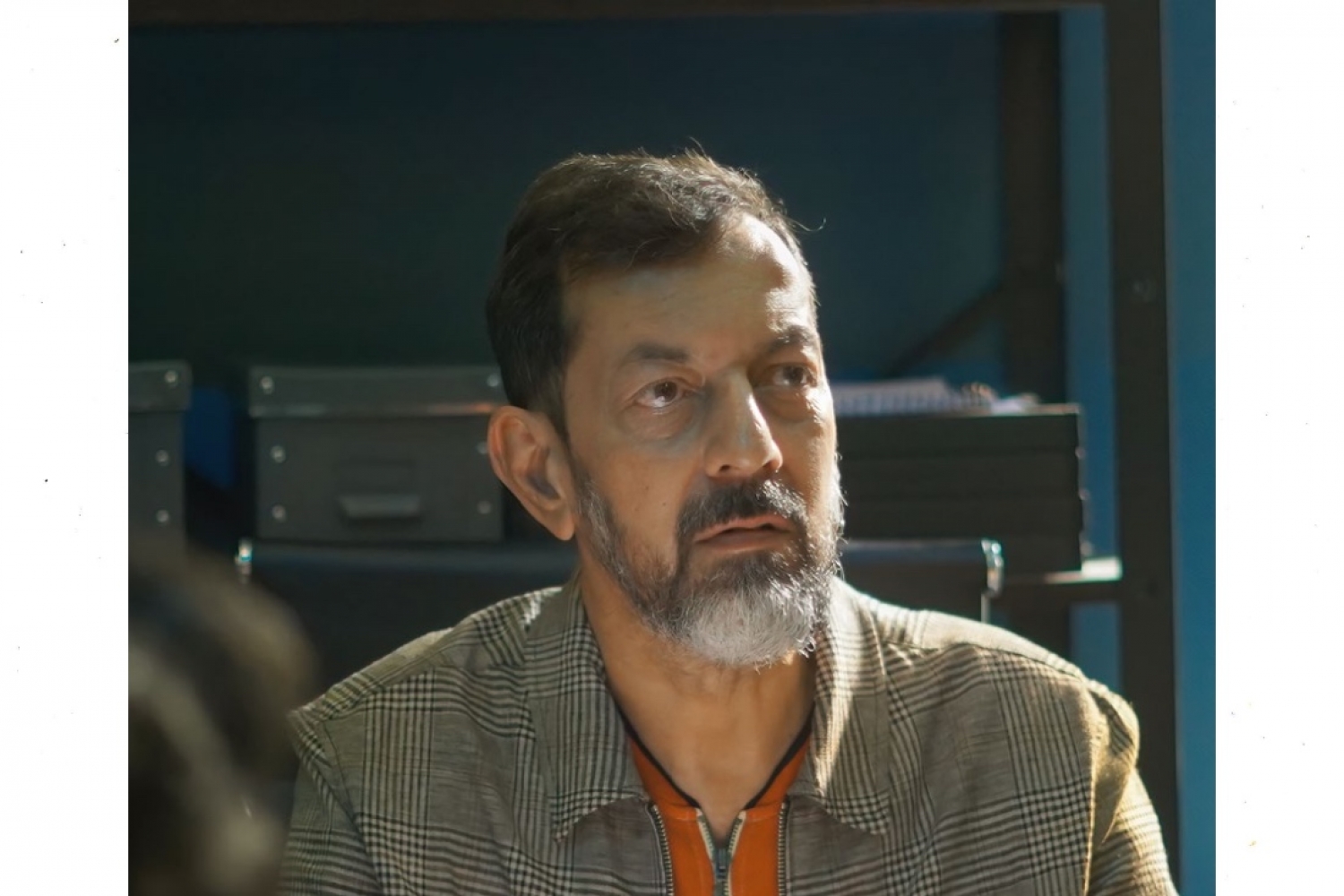 You’re not surprised when Rajat Kapoor, an exceptional actor, director and theatrist of at least a thousand acts, tells you that writing is his inseparable companion. He writes every day. Last year, during the lockdown, he finished three scripts — a whodunnit murder mystery, an adaptation of King Lear and a love story. He also has this overpowering intensity with which he holds your attention. It is something else. Piece by piece he broke down his process of screenwriting, preparing for a role and the importance of a good director over a Zoom conversation from his brightly lit hotel room in Cape Town. Excerpts follow.

Hansika Lohani: Almost twenty years of filmmaking, writing and theatre. How do you think you have evolved over the years?
Rajat Kapoor: That’s a difficult one to start with. Well, I hope one has evolved, and I suppose one would’ve evolved too. It is inevitable, I think. Unless you completely cop out. If you are serious about the process then evolution is paramount. But in what way one has evolved, it is difficult to say. I know with experience that somethings get easier, but that does not make everything easier. For example, I have been scriptwriting for about twenty-five years now, so I definitely have an idea of the craft, but that does not mean any script shows less of a problem than before. Because each new script you attempt comes with its own universal problems. You have to solve them right from scratch, so your struggle as a writer is the same.

HL: Because we are talking about the screenwriting, could you talk about it keeping your more recent films, Kadakh and RK/RKay in mind?
RK: I think with every script, you are presenting yourself with a new challenge. You are also trying to do something you haven’t done before. Very simply, the challenge with Kadakh was to have things play out over one night, in one space and still keep it interesting. And then, how does Maalti (in the film) find out about Chaaya (another character in Kadakh). In such situations, there isn’t a given answer. So this has to happen organically in the process of writing. Slowly these things get solved. And to find a solution, we have to invest time in every aspect of the script. You might know how to deal with the overall structure, but you actually have to write scenes, write characters, find their voice and so on. In the end, it will all come together in some way. So that challenge remains.

HL: Is there a process to this though?
RK: Basically, I do three drafts per script. I write the first one and I show it to my friends. Normally, they say it is rubbish. So I take all their feedback, go back and do a second draft, then a third draft. And after all that, if it still doesn’t come together, I chuck it. Because that means it is not working. And that has happened quite often because you realise that the structure never came together and there is some organic flaw. Also, I have learnt that you don’t need to write a perfect draft.

HL: Because it keeps evolving...
RK: That is one part but for me it is very important to have a deadline for writing. Otherwise you can take three years to write a script and it never comes together. Because you are never satisfied with it, hence I feel there is no such thing as a perfect draft or a perfect film. Whatever deadline I have, I meet it, and even if I am stuck at some scene and I don’t know how it will work out, I write something and come back to it in the second or the third draft to see where the characters want to take you. You don’t have the whole thing worked out in your head. You are evolving, your story is evolving as you progress. So it is very interesting to let the characters take you to the culmination of it. At least you know how you started, where your characters have gone and in what situation they are in now. All of that has given you a great start for the second draft.

HL: The friends who are your biggest critics, have they changed in the last twenty-five years?
RK: Some of them have been added to the list. Some of them have dropped out. But a few of them are the same. Rafey Mahmood is one, my cinematographer. I used to do this with Sourabh Shukla a lot in the early 2000s. We had a really great collaboration. Now, because of our commitments, we do not do it anymore. There is Sharat Kataria, Vinay Pathak, my wife. They are all very tough critics.

HL: I interviewed Nawazuddin Siddiqui sometime back wherein he told me that, “An actor should prepare so well for the character, to the point that he should know how much time he spends even in the bathroom.” Can you tell me a little about how you prepare for your characters.
RK: Honestly, I am a very bad actor. I don’t prepare at all. And I don’t know what preparation is. I don’t do anything at all. You’ve lost all respect for me now, haven’t you?

HL: Not at all. You’ve had such an illustrious career of some great performances!
RK: Thank you but I believe this works for some actors. It’s not out of laziness that I don’t prepare but I don’t personally understand the idea of method acting. I understand if Robert De Niro is playing a boxer, then yes he has to learn boxing. Or if he is playing a saxophone player and he wants to learn saxophone, then that’s valid. Beyond that, I don’t understand how it will matter if my character spends fifteen minutes in the bathroom or three. Or how will that knowledge help me; I don’t get it. But every actor has a different process. And maybe somebody arrives at something in their head, emotionally, then that’s valid for them. But I don’t gain anything out of that process. For me, the look of the character is more important. What does he look like, what kind of clothes is he wearing. And then there is this script which tells you how to be in many ways.

But in the end, I feel you are playing yourself, all the time. So even this false belief that you are becoming somebody else, I think should be abandoned. I say this because to my eye, it starts showing in the performance. I start feeling that I am watching somebody perform. I mean Nawaz is phenomenal, you never feel that with him. But I think very often, you start seeing the sheer load of the knowledge and the process. And I like a certain lightness about actors. A lot of actors that I work with and I admire, have this lightness. Lightness of instinct. They know instinctively what is the tone. You don’t have to ask questions to understand that. You can ask five hundred questions and still be ignorant.

HL: Doesn’t the director also help you reach your end game?
RK: Of course. The director has an overall idea because he has visualised it. You, as an actor, are bringing your character’s point of view. How would I be in a situation, whichis a great input for any filmmaker. And good directors know how to work with that. But the whole magic lies in the unfolding. And if an actor can understand the unfolding aspect of the script — that at this stage how much does the audience know about this character and how will I graph it in some way — I think that’s enough. That is the understanding of the script and not of the characters.

HL: Was it the same while working with director Shaad Ali on Call My Agent?
RK: Shaad was lovely. He gives you a long rope so that was very nice. He is not the kind of director who will tell you what the actor has to present. Also, we had an advantage because the show was a remake. So in terms of character graph and story graph, you already have an idea of how it would pan out. You know not to swing in the dark, as normally it is for the film. You only get to know after the edit, whether it has worked out or not. In this case, we had a safety net of knowing that we won’t fall too bad. So that’s a big help.

HL: In another interview, you tried to explain how it’s never easy to make original films and that is why you turned to crowd-funding for RK/RKay. But do you think with the market opening and streaming services getting funds, things have changed and are looking up?
RK: This is a fallacy we have been talking about for years now that things have changed for independent cinema, but I think things haven’t changed at all. It’s still the same struggle. Where were we twenty years ago and what has changed really? Exhibition has not changed. Quality of our films hasn’t changed. Then what has? Back then also we used to make half-decent films in a year, we still manage the same. So it’s not that the streaming platforms have allowed for you to experiment with content. You see what is being shown on these platforms and it is not very encouraging.

HL: But there must be something you watched recently that managed to hold your attention?
RK: I liked Eeb Aaley Ooo very much. I liked Court and The Disciple very much. I don’t watch shows but somehow managed to see Paatal Lok and I liked that too. That’s it. Maybe it’s easier now to view a film than it was earlier. But that is not really helping people make films or even release them. I have been trying to release RK/RKay for so long now.

HL: So what do you look for in a film before you say yes?
RK: First of all, the role and the script. These two things together. The script has to be half-decent and what I’m doing in that script. It should have a little meat, if not a lot. I’m not very greedy. But my role in Call My Agent was one of the best roles I’ve had in a long time. It was a really meaty role. Luckily, I’m doing stuff now that make a good platter.

HL: And what are you writing now?
RK: During the lockdown I wrote a lot. I finished three scripts last year. One of them might get made early next year. I’m very excited about that. It’s a narrative murder mystery. And I’m getting all my favourite wonderful actors in the same frame. I’ve written another one with my daughter, kind of an adaptation of King Lear. I hope we will be able tomake that soon. And I’ve also written a love story.

This article is an all exclusive from our November EZ. To read more such articles follow the link here.