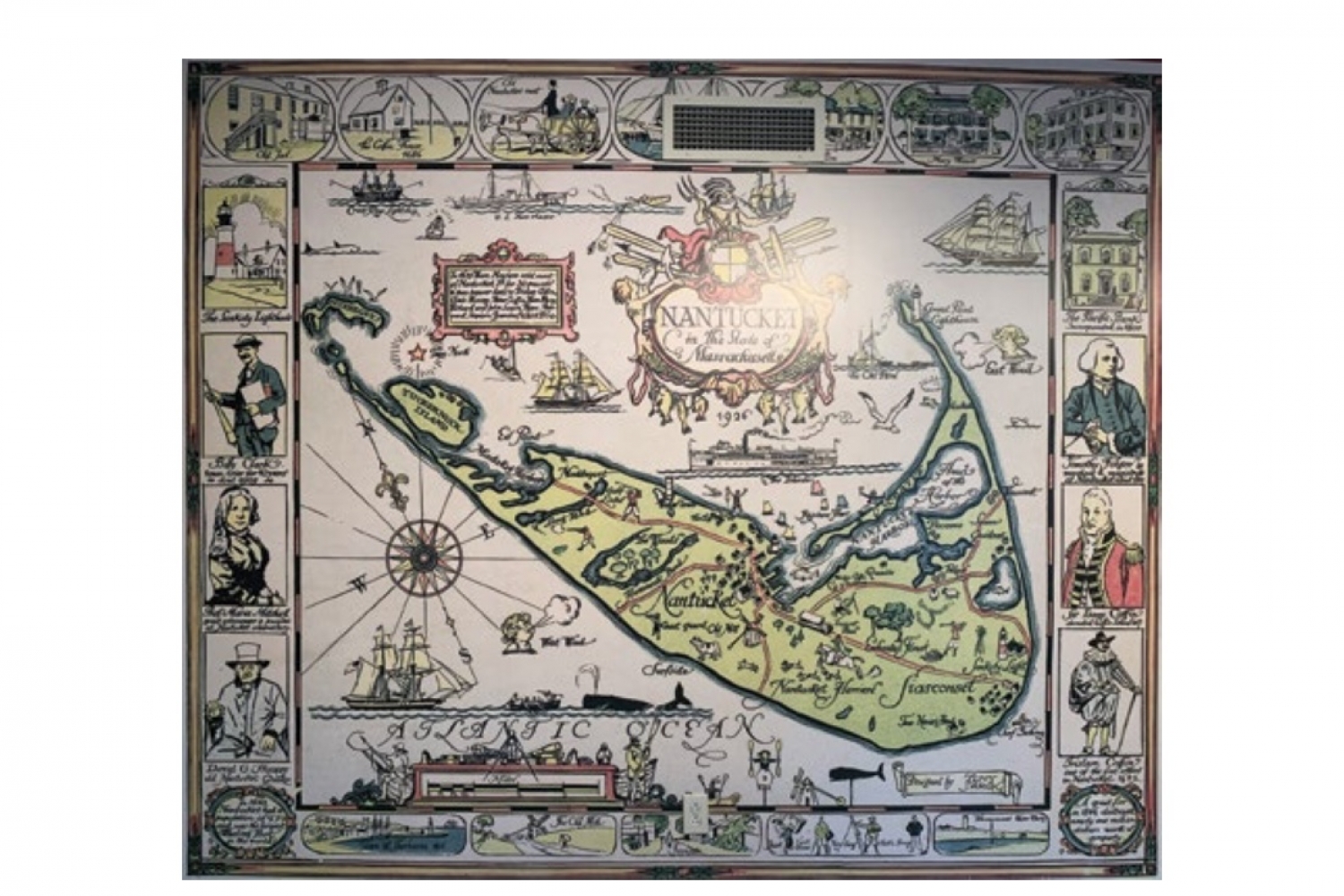 An old map of Nantucket

From Away, A Weekend in Nantucket

Many, many years ago I read ‘Moby Dick’. Not ever having set foot in the US of A at that point in my life, I developed what can only be called an imaginative fascination with the whaling world of the 19th century. Majestic ships resting in harbours, fortunes being made, scruffy wharf boys running to and fro; great whales rising from the depths: letyour imagination wander and it will leap across continents in a single afternoon. Years passed, other stories and cultures planted their seeds in my mind and this fascination receded. Two decades later, pandemic days arrived and out of the blue, a friend gifted me a lovely book called ‘In the Heart of the Sea’ by Nathaniel Philbrick. Before I had even finished reading the first chapter, my imagination was reignited by tales of nautical adventurers, their triumphs and tribulations and the town they settled in - Nantucket.

A few hours’ drive from NYC, up the eastern seaboard to Massachusetts, a hop on the ferry and there we were. As the ferry approaches the island [Nantucket is thirty miles from Cape Cod, Massachusetts] coves and beaches come into view along with the dis- tinctive sound of the hundreds of seagulls circling above (fun fact #1: their calling is what natives and fishermen call mewing). As I gazed at the approaching harbour, I noticed the typical shingle style houses for which the island is famous, along with hundreds offishing trawlers, steeples of multiple churches dotted over the landscape and the distinct briny scent of a seaside village.

Disembarking, I soon corrected my initial impression of Nantucket being a quaint fishing village with a rich history. It is certainly quaint and it certainly has a very rich history but it is far from a cobbled together village. It is beautifully preserved and stunningly well-manicured with endless dunes, resplendent homes, iconic lighthouses, excellent restaurants and vast areas of preserved forest. A wealthy town and in fact, for a brief period in the late 18th and early 19th centuries, was one of the richest communities in North America, being the whaling capital of the world.

A BRIEF HISTORY
The Wampanoag, a native American tribe, lived on Nantucket for centuries, later displaced by English settlers who arrived in the mid 1600s. These settlers had hoped to earn their livelihoods as farmers and shepherds on this verdant isle, dotted with ponds. However, the fast growing livestock herds, along with the increasing number of farms, threatened to transform the island into a windblown wasteland and so Nantucketers shifted their gaze seaward.

While much of the Eastern seaboard had been pursuing whales for decades, Nantucket had not joined those fleets. The time was upon them to make their fortune in the ever-changing tides and they began building boats to take them out short distances to where the ‘right whales’ could be found (literally, the right whales to catch for oil and blubber). A few years on, a boat helmed by Captain Hussey was swept out to sea in a fierce gale. Many miles from shore, he came upon unfamiliar whales with a forward arching spout: the sperm whale. The oil derived from the sperm whale’s blubber was far superior to that of the ‘right whale’, providing a brighter and cleaner-burning light but the true treasure lay in its block-shaped head, spermaceti (spermaceti’s resemblance to seminal fluid gives the sperm whale its name), making these aggressive whales a far more lucrative catch. From that moment on, Nantucketers dedicated themselves to the single-minded pursuit of the sperm whale and soon surpassed their whaling rivals on the mainland and Long Island. 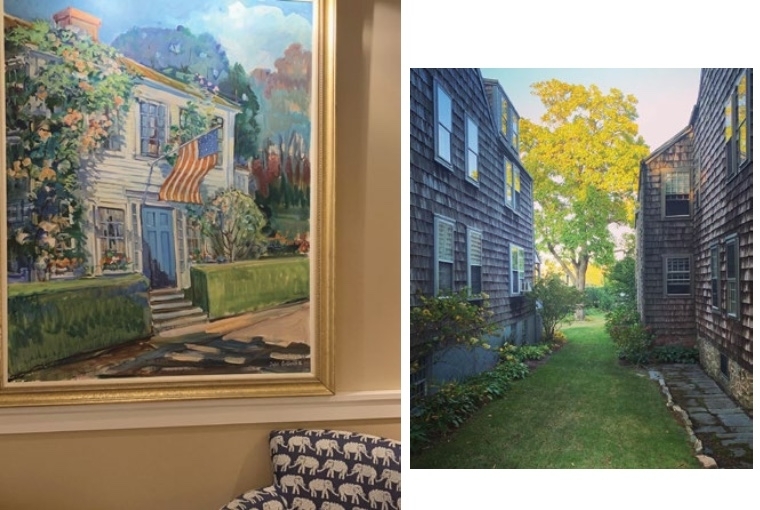 L: One of the many fine from the White Elephant Hotel’s art collection.

They built vast ships to take them further out to sea, reaching well beyond their own continent and towards Africa, the Pacific and even the Arctic Circle. While this brought in a huge amount of wealth, it also entailed longer journeys, years instead of days. With their men gone for endless months, Nantucket’s women raised the children and oversaw most of the island’s businesses and commercial ventures. Highly unusual in the 17th century and highly unusual to this day. These women were the backbone of this town and to me, one of the most interesting representatives of.

Disembarking the ferry, we walked through a bustling harbour, down the cobblestoned Main Street to The Jared Coffin House. (fun fact #2: from England, the Coffin family were the original settlers on the island and almost every distinguished family in Nantucket can trace its roots to them). The first mansion to be built on the island in the mid 1800s is now a charming, intimate and perfectly located hotel. As we enter, we are greeted by a wall of paintings of the famous and distinguished women of Nantucket from centuries past; astronomers, scientists, teachers, pillars of the community. All its suites are named after them: Maria Mitchell (an astronomer), Ana Gardener (abolitionist, teacher) and more. A dedication to preserving this aspect of the island’s history is apparent in all the White Elephant resorts, of which Jared Coffin House is a part.

Checking into the Maria Mitchell suite, the sun streaming through the windows, the paved streets and views of trees just beyond was a lovely beginning to my long weekend. A lovely four-poster bed, lush linens and carefully built in amenities made this hotel seem special but the right books; the well-chosen music...small, intimate and personal touches resonated good taste. I found a lovely carefully edited selection of books; ‘Moby Dick’, ‘In the Heart of the Sea’ and books about Nantucket’s Maria Mitchell herself. A record player soothed me with Billie Holiday and Ella and a chilled glass of wine tempted me into relaxing after one of the easiest journeys. So, we began.

Our day of interesting discoveries started with our leaving the hotel, on their kindly supplied bicycles, riding down streets, past the most beautifully maintained shingled homes (fun fact #3: made from thinly cut unpainted Cedar wood, these homes are a principal feature of the island). Influenced by the strong Quaker presence on the island these homes are a study in simplicity and by law new homes built on the island have to follow the same shingled look. We cycled out of the centre of town on to a bike path that took us eight miles out towards Cisco beach. Most of that ride was through stunning, conserved forest land which is supported by the Land Bank, as evidenced by signs along the way (fun fact #4: the Land Bank is a conservation trust which is funded by two percent of every real estate sale on the island. More than half of the island is protected and conserved by this trust). At the shore of the Atlantic, we walked for miles, watching surfers out for the day on one side and on the other, rolling sandy forests and brush with magnificent seaside homes dotting the landscape. Nantucket is extremely wealthy, truly old money but somehow not ostentatiously so. 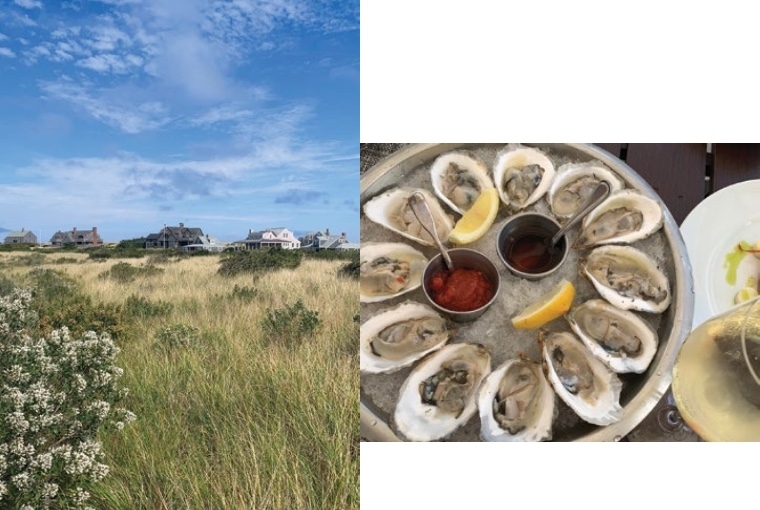 L: Views from the Wauvinet.

On our way back from our delightful sojourn, we stopped at the Cisco Brewery for lunch, where some of the best restaurants in town set up their outdoor outposts with live music, a view of the farms and the freshest oysters. Nantucket is packed with excellent restaurants, the most delicious fresh catch and cosy fish shacks scattered through the island.

Every day brought a new culinary delight, one of the highlights being the Galley beach restaurant set right on the beach in prime position to catch a glorious sunset while ensuring impeccable service and delicious food. Owned by the charming David Silva, (descended from the Folger family; of which Benjamin Franklin was a part), it felt like everything on the island was connected by family, geography or both.

We ventured forth daily to different parts of the island on bikes and sometimes by car. Our most delightful finding was, in fact, The Wauwinet sitting right on the bay, to which we sailed. It has an unparalleled view of the water and wildlife refuge it abuts. Classical 19th century architecture meets laid back east coast luxe, with a historical beach vibe, not to mention the wonderful art collection of nautical and Nantucket themed paintings, worth their own visit. There is so much to do on this sumptuous island of approximately forty seven square miles. The galleries, whaling museum with its incredible history, lighthouses, ‘downtown’ shops for fashion, art and books and boat watching so it seemed only logical for our last couple of nights to be at the White Elephant Inn. Built as a collection of beach cottages in the 1920s and overlooking the harbour and ocean beyond, it is the perfect spot. Between the beautifully styled downtown lofts and summer cottages, some of which are designed by the talented Lily Pulitzer, there is something for everyone. I opted for the hotel on the water, with balconies that overlooked the town and the boats in their con- stant rituals of back and forth.

Nantucket is layer upon layer of history, geography, family lines, religion, adventure and hope, resonant through the island and it is no wonder that the people who love Nantucket either live here or return annually. There is magic enough to make one’s imagination soar...just as mine did when I first read about it all those years ago.

This travelogue is an all exclusive from our Bookazine. To read more, grab your copy now.

Read an exclusive article from our Bookazine about the new property in Delhi.

The First House by The Villa Escape, co-founded by Suchna and Yogi Shah, is nestled in Saligao, a wooded village with an abundance of nature in Goa.

The former chef-partner of SodaBottleOpenerWala, Anahita Dhondy, is venturing to keep the love and interest for Parsi cuisine alive, through her debut cookbook.

Jessica tells us more about the independent boutique brand’s journey and philosophy.

Exploring Tahir Sultan Food, an endeavour built during the lockdown.

Exploring the endeavour that was brought into existence as a celebration of life.