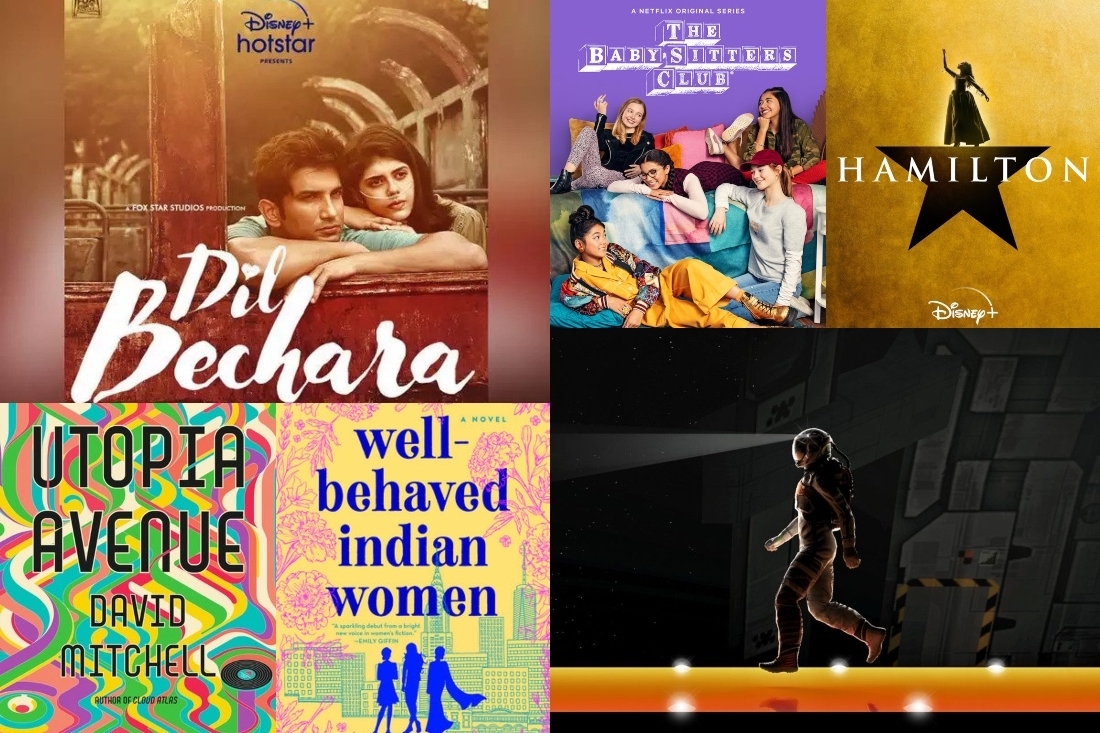 Hamilton
Critically acclaimed American musical, Hamilton is arguably the most successful Broadway musical of the modern era. A masterpiece penned by Lin-Manuel Miranda, Hamilton tells the story of the founding fathers of the United States of America by focusing on Alexander Hamilton, the first secretary of the treasury, an influential economic thinker and a leading promoter of the Constitution of the United Sates. The score is hip-hop influenced but varied in style. The filmed version is all set to drop next month and while the experience of watching the musical live is not the same, it’s still definitely worth the watch.
Release Date: July 3rd
Where: Disney Hotstar

Dil bechara
The Indian adaptation of John Green’s novel The Fault in our Stars, Dil Bechara starring debutant Sanjana Sanghi and the late Sushant Singh Rajput is all set to make a digital release as a memorial and tribute to the lead actor. A much anticipated release, Dil Bechara is said to be a promising production that is sure to not leave any viewer dry-eyed.
Release Date: July 24th
Where: Disney Hotstar

The Babysitters Club
A 21st century spin and remake of the Ann M. Martin’s cult-classic coming-of-age novel that released in 1986, The Babysitters Club will be a 10-episode live-action series. Starring the 90’s icon, Alicia Silverstone and following the life of five teenage girls who set up a local baby-sitting business together, the show will certainly bring back all the warm fuzzy feelings from our teenage years.
Release Date: July 3rd
Where: Netflix

Breathe into the Shadows Season Two
The second season of the hit web-series Breathe directed by Mayank Sharma is back with Abhishek Bachchan in the lead, making his debut on a digital platform. The psychological thriller follows the life of a father in search of his missing daughter. A gripping and nail-biting plot, the second season checks all the boxes for a quality binge session.
Release Date: July 10th
Where: Amazon Prime

How beautiful We Were by Imbolo Mbue
The author of the New York Times bestseller Behold the Dreamers, Imbolo Mbue’s powerful second novel, How Beautiful We Were is set in a fictional African village of Kosawa. It tells the story of the people of Kosawa living in fear amidst environmental degradation wrought by an American oil company. The country’s government, led by a brazen dictator, exists to serve its own interests. Left with few choices, the people of Kosawa decide to fight back. The author explores a gripping narrative of colonialism and ancestry in this tale, highlighting one of the most urgent matters of today.

Well behaved Indian Women by Saumya Dave
Set in Manhattan, Well-Behaved Indian Women chronicles the lives of three generations of women who struggle to define themselves as they pursue their dreams. An easy and realistic read, Dave captures the complexities of their everyday life and their quest to figure out their identity.

Utopia Avenue by David Mitchell
The imaginative and award-winning author of Cloud Atlas and The Bone Clocks, David Mitchell spins a web of music and money with a psychedelic British band finding fame and fallout in the ‘60s. Utopia Avenue will tell the 'unexpurgated story’ of a British band of the same name, who emerged from London’s psychedelic scene in 1967. From recurring characters to an innovative narrative structure, Mitchell delivers a fun read that will help ease the lockdown blues.

Afterland by Lauren Beukes
In Afterland, the world is run by women. A mysterious pandemic has destroyed the vast majority of the male population, and women are desperate to keep the human race alive. Men are valuable, and so protagonist Cole must protect her son, Miles, by disguising him as a girl. A tale of a dystopian future, seemingly in the same universe as The Handmaid’s Tale, Afterland is intriguing and enthralling, especially at a time when we are going through a global pandemic.

Unrated
A two-day virtual alternative arts and music festival hosted by Mumbai’s production company Transhuman Collective, Unrated will take place on July 18th and 19th. The free-to-watch livestream event will host three hours of music each day, featuring electronic music producers and artists such as Ash Roy, Calm Chor, OX7GEN, Vinayak^a, The Helium Project and Zokhuma spinning DJ sets via 3D avatars, plus sound-reactive visuals, lights, lasers and pyros. The sets will take place in a specifically designed ‘space station’ created by TransSpace, a platform of real-time live 3D virtual events created by the firm for the brands. The event is a fundraiser with an attempt to raise 10 lakhs for PPE kits, to equip healthcare workers in India, amidst the ongoing pandemic.

A Platform review of Balsa, an airy, modern restaurant in Mumbai’s Lower Parel.

Boom or bust? Fad or here to stay? Anti-climate or inevitable change? Some of the paradoxes that are NFTs and blockchain. We explore more.

We shed a spotlight on Indian artists who are a part of the queer community and channel their individuality and pride through their art.

H&M HOME brings fashion-forward décor and accessories for every room and style. We explore more.