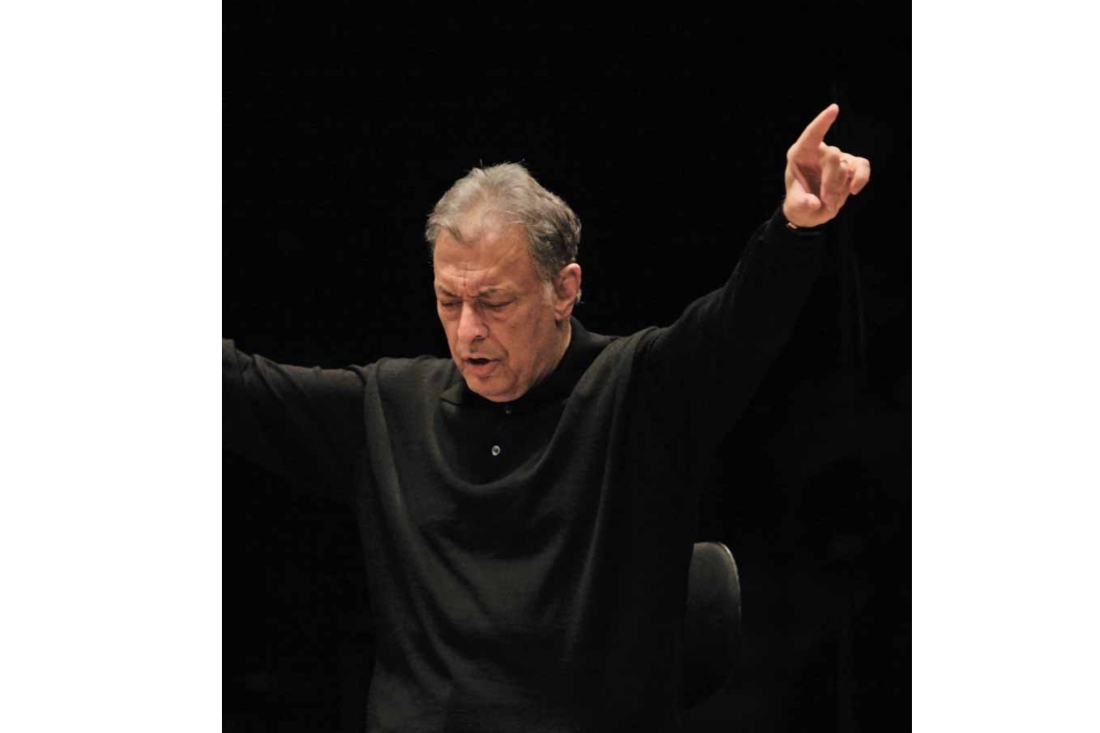 This conversation was initially published in our July/August 2010 issue and is a part of our extensive archive.

With an international career that has spanned more than five decades - India-born Zubin Mehta is one of today’s most celebrated and respected conductors. Born to Mehli Mehta, founder of the Bombay Symphony Orchestra and in a family where he doesn’t remember what he did first, speak or sing. ‘Music was in my house because of my father. My father played music from morning till night he practiced, he taught, he rehearsed so | had it around me whether | wanted it or not. | don’t know if music was my first language or Gujrati.’ After studying pre-medicine in Bombay for a short period of time, Zubin made his way to Vienna where he enrolled in the Academy of Music. His world finally changed — his profound artistry was discovered and the boy from Bombay who as a five-year-old stood on vegetable crates staging a make believe orchestra and who as a teenager wore two unmatched black shoes (as the complimentary pairs’ had holes on them) went on to become the gifted maestro we know today.

An exuberant, extroverted performer and person, Zubin Mehta’s genuine star quality and talent has not only created a body of work with the world’s greatest orchestras, including the Vienna, Berlin, Los Angeles, New York and Israel Philharmonic Orchestras but he has also been awarded the Nikisch-Ring bequeathed to him by Karl Bohm, the Padma Vibhushan and The United Nations Lifetime Achievement Peace & Tolerance Award along with many other prestigious honours. Hs passion for music goes way beyond sound, tune and orchestra; he uses the power of his music to unite and move people and politics and to nurture talent and create great musicians for tomorrow.

He lives and travels all over the world, with homes in multiple countries, but he continues to hold on to his Indian passport. For Zubin home is ‘the minute I step into Bombay. But my principal home is in Los Angeles and my spiritual homes are Tel Aviv, Vienna and Florence. | feel very comfortable in all these places because | make music there with musicians that | have grown up with now.’ Just before his scheduled rehearsal | managed to catch the great master in Valencia, Spain where he is the President of the annual Festival del Mediterrani. Twenty minutes later with a different tempo of humour, seriousness and a strong underlying tone of passion | understood that Zubin Mehta was more than just a conductor. ‘We are interpreting works of such incredible classic masters. The works of Mozart and Beethoven — they will exist till the end of time and we are the caretakers of this incredible museum that is literally at our disposal and after us the next generation will take it forward.’

Your father’s influence over your music and you is overwhelming in every interview, documentary and biography about you. What do you think or know was his take on Zubin Mehta the conductor we know today?
He was the primary influence on me until | left for Venna when | was 18. So my first 18 years were spent really with my father, with his music, prodding and coaching, he was also a very hard disciplinarian. When | went to Vienna it changed, but of course | kept in touch with him! And thank god he lived in LA because during his last years | made music with the Los Angeles Philharmonic so he used to be there at every concert. He was veryhonest and he helped me a lot in my professional years. There was always a mixture of praise and criticism though he was not my biggest critic; | think the newspapers have always been my biggest critics!

Your career began as you say ‘substituting for every ailing conductor’. What was the young Zubin’s goal and ambition like then when it came to music?
In those days, | was back in Vienna with my little family of two young children. | didn’t have too much to do and when people around the world got to know about me they would ask for me when there were cancellations. In the first years | was available for these cancellations and that’s how | made my initial career. However, it was not only important to be asked to conduct once for an ailing conductor, the second time you have to be asked back because the orchestra liked you or the public appreciated you. So it was very important to be invited the second time, which in my case happened most of the time and that’s how my journey started.

Your repertoire goes across 300 to 400 years of music and as you had earlier pointed out every 50 years the styles change. In your own run as a conductor, how would you understand your style and your re-interpretation and curation of the 400 years of music?
Well | come from a Viennese school of music. | was trained there and lived there for seven years. My repertoire is basically the School of Vienna that began in the middle of the 1700s and goes on till day-before-yesterday. That is the basis of my repertoire. Then, of course, | do a lot of French, Russian and modern contemporary music composed in America, Italy, Israel etc. But the core of my repertoire remains Vienna.

In one of your interviews you said that your biography is about ‘my thoughts on music and generally how music has run my life.’ Comment.
Music is my primary language. It’s the language with which | communicate with the world. it begins with communicating with my orchestra itself and then through their brilliant playing to the people sitting behind me. Music brings people together. We musicians are not astute politicians and  might not be able to change history but we can bring people together. And, that’s what | do in the Middle East. We can get Arabs and Jews to sit together and smile at each other during a concert. But we don’t do enough, we have to do a lot more to bring youth into concert halls because they are the future. In Europe we have no problem our houses are always full with young people. But in America there is a real crisis and | hope they are doing something to change that.

On one hand you have played for audiences packed with both Arabs and Jews and on the other you performed Wagner In Israel once, and then decided it was still too traumatic for the Israeli audience. Music binds, transports, reminds, and creates a range of emotions that is often unexplainable in language. After all these years how do you understand the power of music and what would you ideally want to use it for?
People don’t understand quite how powerful music can be. Especially in today’s time where there are so many places in the world where people don’t like to live together. Middle East is a prime example. The power to bring together, for example, Jews and Arabs is fabulous but we need to do more. But in order to do more we need more money. To support a cause and do free concerts is wonderful but an orchestra needs funds and the funds are missing sometimes, so we have to come together and put up a concert. We should do much more though. | don’t know what is being done in a place like Kashmir to bring Hindus and Muslims together but | am telling you music will do it. Political rallies are not the answer. For instance, |am going to do a concert on the 5" of July on the border of Gaza with the Israel Philharmonic for this soldier that the Hamas has imprisoned for four years now. There is no law anywhere in the world where the Red Cross cannot visit prisoners but this boy who has been a prisoner of Hamas has been denied this visitation. Now my concert is not going to let him out but we are doing the concert to tell them to please object to the fact that even the Red Cross is not allowed to visit him. That's what we are doing and we are doing it on the Gaza border. So, hopefully they will hear about it and hopefully they will sympathize with the boy.

What according to you comprises the future of Western classical music and where do you see it headed?
Western classical has its home in Europe basically, central Europe to be particular. Here, where | am right now,in Spain, as well, we are doing wonderful work. There are great audiences, and concert halls and opera houses are being built everywhere. We are already going to open a new Opera house in Japan in 204 and are planning on taking Wagner's Ring Cycle to Osaka in 2014. That’s how far in advance we plan, so, | don’t thinkthere is any problem for Western Classical music to progress in the future.

What about Western Classical music in India?
We have a foundation in Mumbai in my father’s name, where we are educating young children in Western music and we have a waiting list of 200 to 300 children. So the interest is huge and along with that there is talent as well. | do hope we can really nurture this talent in India. The Japanese, Koreans, Chinese and other Oriental countries are hell bent on cultivating their children in Western music. India has such a lot of music of its own and as much talent, we should definitely nurture it. | am all for the fact that if an Indian child learns Indian music and has an interest he should also learn Western music at the same time — if it's possible.

According to you what makes a piece of music great?
It’s durability of course. Starting from the middle ages composers like Monteverdi that kind of invented opera in Florence and his operas are performed till date. Handel’s operas that he wrote first in Germany and then England are still performed everywhere as well. We have composers like Bach and Beethoven; every single piece they have written will last till the end of time and it is geniuses like them that have given us this legacy. That is what makes it classical and this durability is what makes a piece of music great.

After more than forty years of conducting, are there still some pieces that you would like to do which you've never gotten the opportunity to do?
Yes, Wagner’ Parsifal, but | have already planned it and | will be performing it in 2014.
Text Shruti Kapur Malhotra