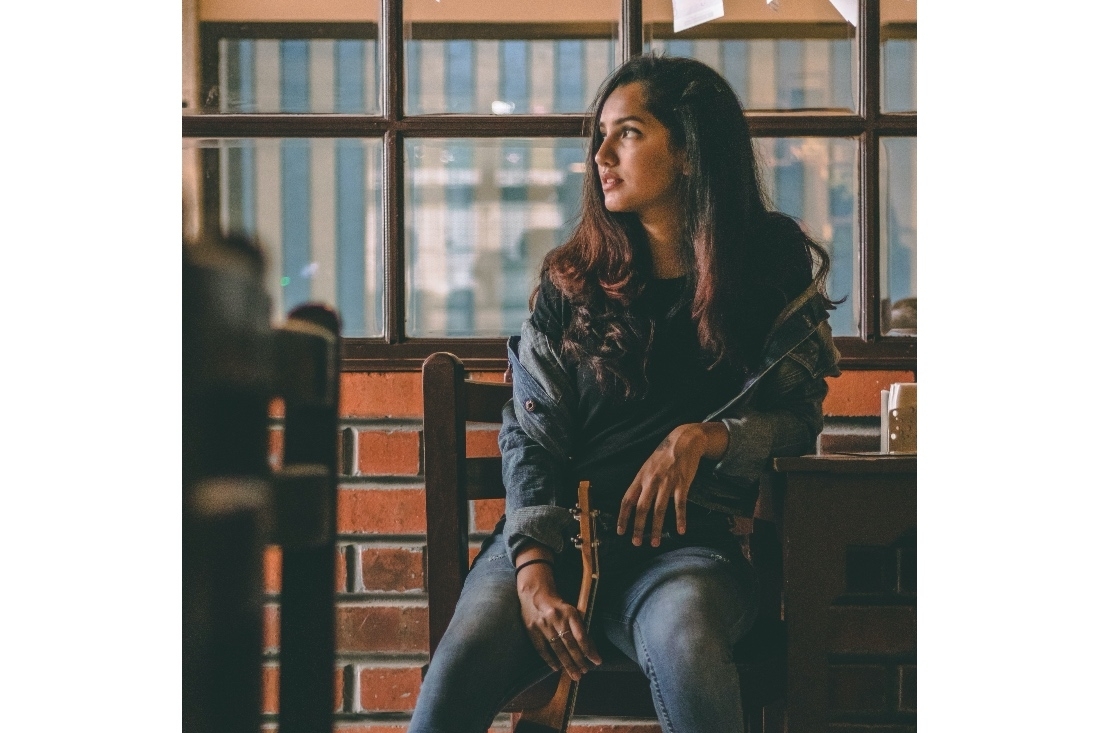 Frizzell D’Souza is the kind of artist whose music, from the very first strum of the guitar, washes you over with a sense of calm. She carries within her voice, a kind of ease you only find in soft summer mornings. With two singles out this past year itself, this young musician is one to watch out for. Her debut single ‘New’ was released in 2020, closely followed by ‘Drown Away’, making both of them some wonderful quarantine productions, finding inspiration in the themes of love, longing and nostalgia. While her covers on YouTube are stripped down to acoustic versions of songs ranging from Billie Eilish and Kodaline to Ben E. King and John Denver, her debut singles have tinges of blues and pop music. She is increasingly gaining recognition from master artists such as Ehsaan Noorani, who has played a key role in shining the spotlight on indie musicians endeavoring to showcase their talents.

While she is currently pursuing her bachelor’s degree in Architecture from RV College of Architecture in Bangalore, Frizelle constantly seeks to capture memories in her songs. Her latest single, Foolish Once Again is set to release on May 10. We speak to her about her inspirations, the challenges she faced while producing music during the pandemic, and what lies ahead for her.

The Artist
My upbringing has always involved music in one way or the other. I went to a catholic school where daily routine couldn’t exclude music. I sang in choirs, played for school orchestras, and took childish pride in winning group singing competitions. Although, my inclinations towards music have taken deep influence from my father, who was in the Navy back in the 80’s and would bring with him CD’s and cassettes of international pop music from all over the world – a collection he, and now I, hold very dear. Moving to Bangalore for college further strengthened my interest in music, since it was my cherished escape route from the un-amusing and mundane tasks of everyday life.

The Inspiration
Both ‘New' and ‘Drown Away’ stem from very different ideas and experiences. ‘New’ is mostly fictional - I came up with the narrative as I wrote each verse, whereas ‘Drown Away’ is deep rooted in childhood memories of Goa. The songs both began without an idea of the end product. I was exploring new ways of song writing – crafting a storyboard, creating characters, penning imageries that a listener could relate to. Somewhere during the process, I sensed a theme and worked towards it. ‘New’ is the story of two people dealing with the intricacies of fragile, ageing love. ‘Drown Away’ talks of all my experiences as a child in Goa, the intangibles that I find etched in my memory.

The third single, ‘Foolish Once Again’, is a ballad with an underlying theme that talks of our imperfections as humans. It is narrated through ballroom dance, in the story of two people falling for each other’s naïve mistakes. The arrangement and composition are both inspired by slow waltz – a delicate yet beautiful form of ballroom dance.

The Music
I’m still in the process of finding my sound, to be honest. I believe my style so far has been very simplistic and laid back, the lesser the better. Indie/folk music is a style I keep going back to. I’ve always drawn a lot of influence from English classics like Louis Armstrong, Eric Clapton, The Beatles and so on. I’d love to explore blues and jazz some day! Music in the current era is getting harder to be categorised into genres and styles. Every artist has their own sound and genres are getting more fluidic than ever.

Architectural X Musical Influences
I’ve not particularly noticed direct influences from architecture to music or the other way round. But I have drawn parallels between the both in the sense that designing buildings and creating music both follow a process. Architecture school is rather known for the insane number of times we are asked to rework on our projects and looking back now, I’ve realised that the process really is crucial. The interesting part is that each project takes a different route and so, to quote my professor, Dev Bildikar, “The shortest distance between two points is not always a straight line”. Every line we draw has meaning, and I’ve found myself trying to make sure every element of my music – from the song itself to the artwork - also holds the same principle.

The Indie Artists’ World
This has been a great time for an independent musician like me and many others to come up. I have, without a doubt, gotten an incredible amount of support from established artists from all over the country. Notably, it was Raghav Meattle and Ehsaan sir from Shanker-Ehsaan-Loy who gave me the first push into song writing. Through their Instagram lives during the 2020 lockdown, they invited smaller musicians onto their platform to perform and encouraged them to take the next step. Then on, the online base has been very inviting and accommodating and I’m extremely grateful to have grown online this past year.

The Future
At the moment, in terms of music, I’d like to keep learning the art of song writing and hopefully put out an EP/album in the next few years. I have no solid plans until I graduate and will go where the road takes me!