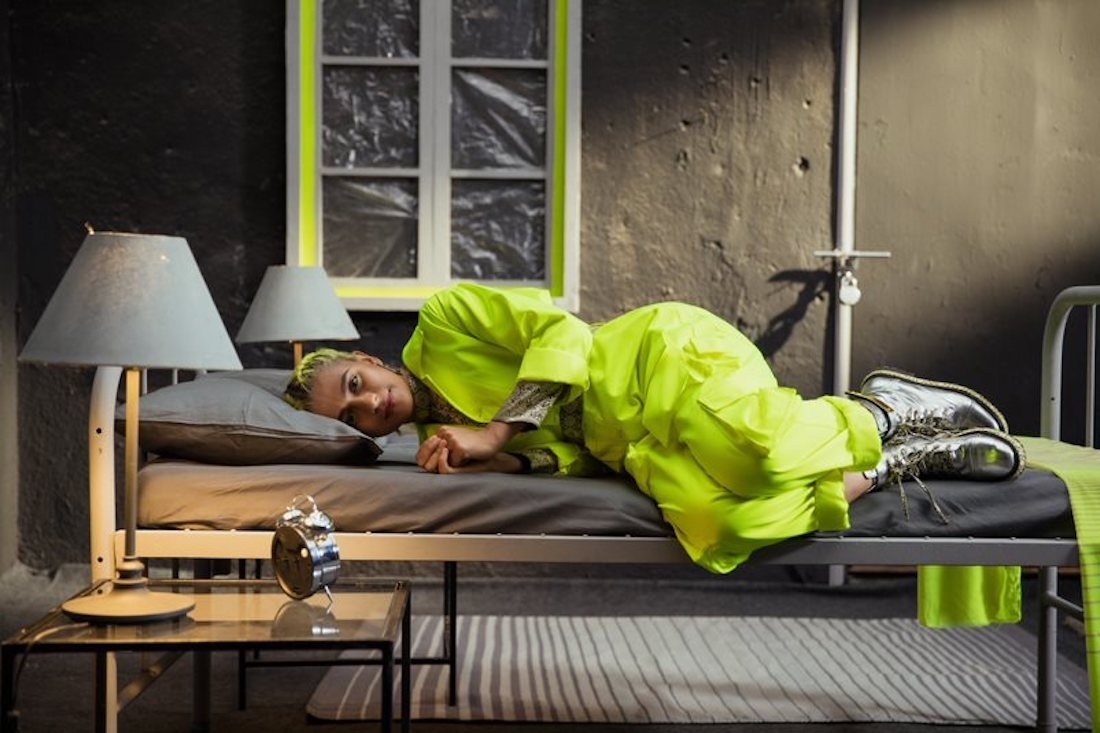 ‘I won’t take in what they feed us/ Run away in my Adidas/ Brown girls of the world they need us/ Truth is love and love will free us.’ — Verse two, Waiting for Me by Madame Gandhi.

When I first interviewed Kiran Gandhi, a.k.a. Madame Gandhi, she was juggling two lives — one of fulfilling drumming duties for MIA and the other of a student studying at an ivy league school. Her life was about balancing music, math, female empowerment, and intricately tying them all together. With a minor in Women’s Studies, Gandhi has always believed strongly in the feminist movement and holds extremely powerful political thoughts.

Now, reading up about her six years later, I was definitely expecting new music but didn’t know if the strong will had still stayed with her. However with her new track, Waiting for Me, it is clear that her will is stronger than ever. The song has a female-powered music video that also celebrates fashion. That’s what defines her actually — art and activism. The song unfolds a contrasting tale, first is a muted palette of obedient, braided-hair, white and grey uniformed school girls marching to the tunes. Everything monotonous and dictated. The second is a celebration of colour, pure joy, freedom, as you see women dressed in bright colours and running in the fields. ‘I don’t want our identity to be defined according to how oppressed we are,’ sings Gandhi as an interlude in the song. Even the cast of the video is filled with members who are secular, diverse, and idiosyncratic. The group of queer, trans and gender non-conforming people includes transgender radio jockey, Shanthi Muniswamy and Indian illustrator and activist, Priyanka Paul, who goes by the name Artwhoring.

I feel that the timing of this track couldn’t be more right as artists of all nature face such toxicity for just having an opinion. In an e-mail interaction, Gandhi breaks down the nuances and the great detailing that went into making this track.

From 2014 to now, do you think you have evolved as an artist?
Yes, when we met first, I was not making my own music! I was always drumming for other people. I never thought I would make my own music, I always thought I would work in the music business instead, alongside artists, because that was my path. It was only until the 2015 London Marathon story, where I ran bleeding freely to combat the period stigma that women and girls face around the world, did I feel compelled to actually start writing my own beats, melodies and lyrics. Each EP since 2016, Voices, then Visions, is certainly a work in progress as I experiment with getting closer and closer to my own sound. I like using these songs as ways of testing what resonates, what is fun to perform, what inspires my audience, what doesn’t. It’s data, it’s information, which I build on. Vibrations will be an uplifting, percussive album, with a lot more emotional depth and introspection, because it is being written during the time of quarantine. I can’t wait to share it with you all at the top of 2021.

Can you tell us about the inspiration behind the video, Waiting For Me?
Throughout my childhood, I always attended all-girls private schools. In NYC I attended The Chapin School, and in Mumbai, I attended St. Anne’s. I loved my time at both because it was so inspiring to be around other women and girls, and celebrate the space to be leaders without the more domineering energy of our male counterparts. But I also felt critical of how we as a society in general school our children to conform, to not question society, to not develop their own creative intuitions. So, this music video is about moving from repressive spaces where we just take in what we are fed, and seeking out acts and spaces of personal freedom and liberation in our own lives. It feels especially timely during this period of global unrest. May we all take a moment to ask, ‘what does my own oppression look and feel like? Whose oppression might my actions inadvertently be contributing to?’ and, ‘what does freedom look and feel like for me?’

How did you decide the sunny palette that defines the discography of the single?
My name is Kiran which means ‘ray of light’ in Hindi! So, themes of sunrise colours and sunlight have always inspired me. I like the idea of new horizons, new hope, new ideas! Each day is a new opportunity to challenge the status quo, to re-invent new norms. And in the music video for Waiting For Me, I loved the idea of us being united as a squad through our colour palette, but each expressing our own individuality through each outfit. This was key, as I think there are ways to exist in the world through unity, without feeling limited or having to conform and blend in.

The video shows a new code of femininity and there is a strong underlying message you are trying to communicate through the video. Tell me about the conversations you had with Misha Ghose about the direction you wanted to take with the video?
Well, the entire team is female led, which makes representing ourselves on screen how we want to very easy! I was working with a team of really talented, powerful women whose identities come across in the film itself. It is about unapologetically celebrating joy, togetherness, nature, and freedom. It is about questioning the aspects of society that no longer serve us. It is about feeling like our best selves and depicting on screen what that looks and feels like. It is a ‘new code of femininity’ in the sense that we aren’t trying to perform masculinity in order to convey strength! So often we as women think we have to aspire to male standards of leadership in order to be taken seriously. The nature scenes in this film wholeheartedly reject that. It feels distinctly empowered in its feminine. In its connectedness. In its joy. 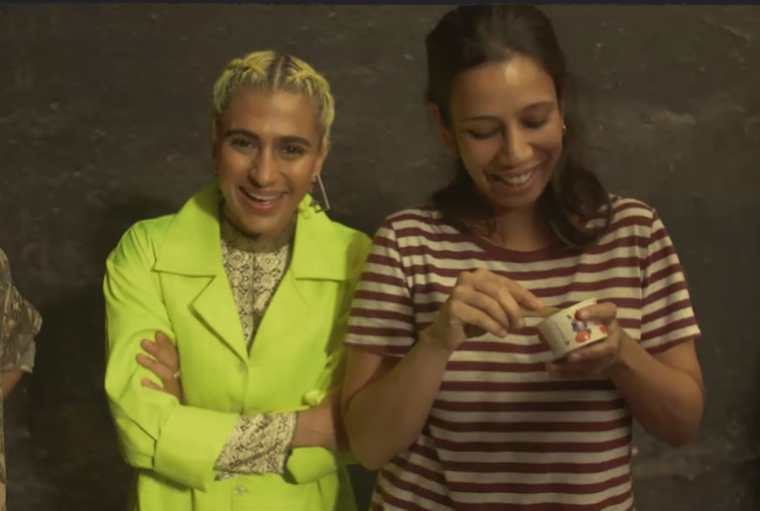 You’re seen pairing Adidas sneakers with a traditional lehenga and have managed to live up to your signature hypebae-in-comfortwear image. What is fashion to you?
I get a lot of inspiration from my mom who loves new clothes, but also mixing together different aspects of her Indian Irish heritage in how she dresses daily. She and my grandmother love colour, love style, love freedom in fashion. So since I was a kid, this self-expression was not only modelled by my mom and grandmothers, but also encouraged! So the fashion in my different music videos is of course made possible by our styling team lead by Kanika Karvinkop and Indrakshi Pattanaik, but I also find it deeply important that I fully feel like myself in these videos, that they are elevated looks but still outfits that I’d wear in my life!

How did you decide upon the cast?
I wanted to surround myself with folks whom I genuinely admire, whom I’m friends with, and whom I’d want to stay friends with long after the shoot. Shanthi is someone whose friendship means a lot to me, she is a fellow Pisces, and we always send each other a lot of positivity and support. Devika Jodhani, the hair and make-up artist on set, has also become a long term friend of mine whom I FaceTime with almost daily. 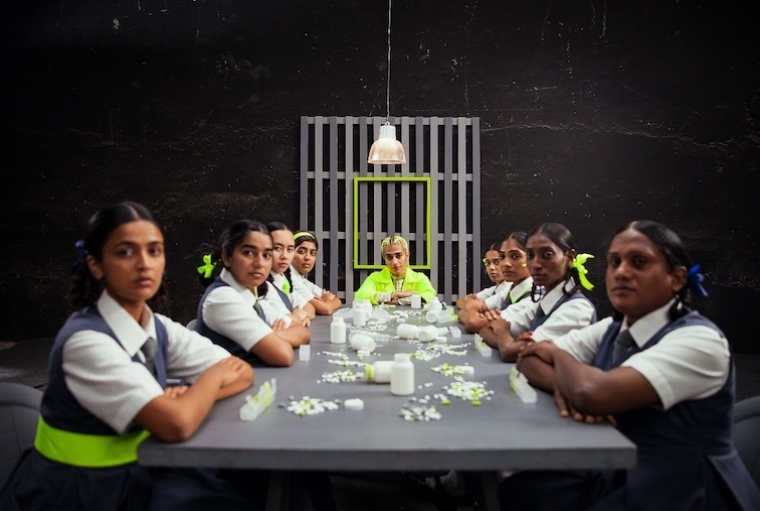 Were you working on anything before the pandemic?
I was touring heavily, so it feels good to have this required discipline to work solely on the new music! We are gearing up to release Visions Remixed, where we had all women of colour producers, each remix a track on the album. That will come out globally on July 31st!

Tell us about your collaboration with Sony Music Masterworks and what the audience can look forward to from it?
Working with Masterworks so far is feeling really good, I am motivated by the team there and how effortlessly a lot of this heavy lifting comes to them. They are deeply supportive of the music and my message, and I feel that in my continued communication with their various teams.

Do you think as a young artist, there is some sort of responsibility that you have towards your audience?
Yes, I want them to always know I will tell the truth!