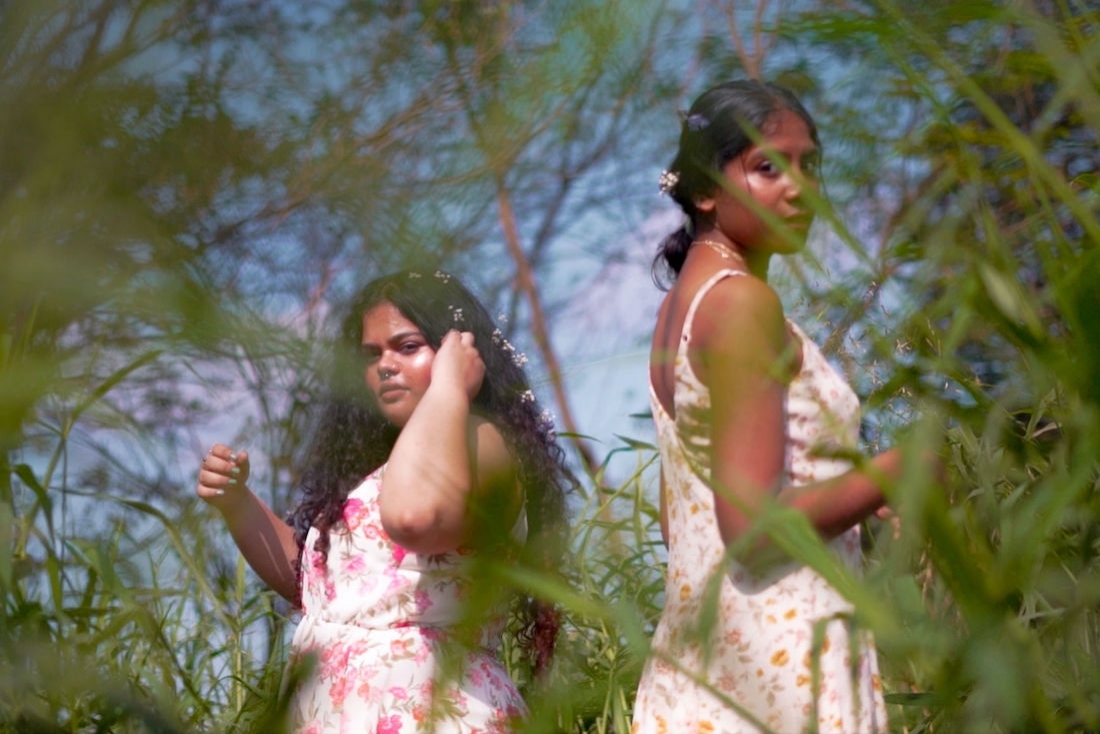 Mumbai-based musicians Ramya Pothuri and Tanya Shah, make the duo Water and Rum. Finding their sound in tinges of friendship, the solidarity of sisterhood strengthens their tunes. Tanya and Ramya found each other in music school a couple of years ago and have been jamming together ever since. Personal experiences and casual banter often led the duo to discover the lyrics we can relate to today. Though their earlier music may be ridden with soft overtures, their latest single tfru, is a more upbeat and even hard-hitting number. More than just a catchy beat, this fun song dares to question failed love, and explores one’s own self worth.

Being unabashedly themselves, Ramya and Tanya talk to us about their lives, their work and the way ahead.

How did the duo come to be?
We met in the True School of Music in Mumbai. We just began hanging out and singing for fun, bonding over The Paper Kites and Daniel Caesar. We wrote our first song together a day before an open mic in school and realised that we enjoyed doing it. Once school was over, we kept in touch and because we were such good friends, we managed to formally come together as Water and Rum.

Why the name Water and Rum?
We were actually called something else entirely but had to change our name last minute to avoid being ‘sued’. At the time, we had a song that was called Water and Rum and somehow, both of us kept gravitating towards that name and so it stuck. Now we’ve found several reasons as to why we’re called that, one of them being that we both met at a stage in life where we made a lot of stupid decision on rum and therefore became friends, and later, band mates.

How would you describe your music sensibility?
We’d describe our music as indie folk with influences from R&B and Bossa Nova music. We also like to call it ‘sad girl music’, although recently it’s been more ‘bad bitch who has lots of feelings’.

What is your music making process like?
Our ‘music making process’ is us hanging out in each other’s homes, drinking chai (tea), listening to music, catching up on everything and then getting to work. Ramya usually has a guitar progression in mind that she plays and then we both proceed to sing melodies over it with our phone recorder on. Once the final melodies and lyrics are in place, we make a demo out of it and try different production things, until we find something that fits.

What was the inspiration behind your latest single tfru?
Lots of rants, dating fails and a big fat realisation that we were too hot to be dealing with people’s shit. It was a phase for the both of us, where we were tired of being taken for granted and meeting people who didn’t respect our time, emotions or effort. ‘Waste my time, I know you don’t think it flies,’ was probably the line that stuck with us while we were randomly singing over a guitar part, and we just decided to build over that feeling of angst and hope.

What is your favourite part of working together?
I think the fact that we’re best friends and enjoy each other’s company and don’t get sick of each other for days on end, makes working with each other fun. We both knew each other before we were proper musicians and know each other outside of just our art, which really helps in what we create as musicians. We have a running joke about how our personal lives are interconnected, and if anything happens to one, it’ll quickly follow for the other. All these little things, and just roasting each other and being there for each other, makes it very easy to work together.

What's next for you?
We’re not sure yet, but an EP is definitely in the works. Right now we want to spend time writing new songs, better understanding how we want to sound and maybe performing live a lot lot more. So for now, it’s creating more music, writing more edgy lyrics and drinking lots of chai.

In conversation with the singer-songwriter about his newly released track Mama, and his upcoming debut EP.