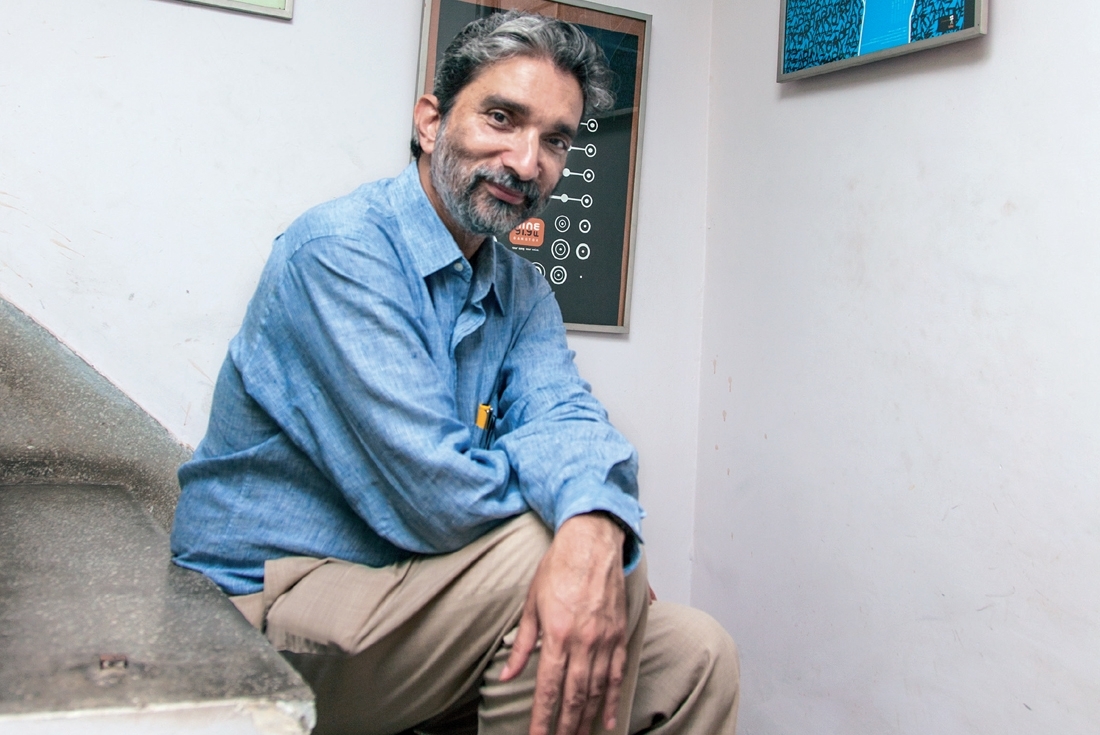 Itu Chaudhuri is of course, known well for the work done by his eponymously named firm Itu Chaudhuri Design but he is even better known amongst fellow designers as a typophile, systems thinker and an articulate practitioner of design.

Your parents were artists: a sculptor and a potter. Were they part of your early influences?
I looked at a lot of sculpture as a kid and that was a direct influence: attitudinal in a way; that’s one. The other is, I suppose, some sort of a sensory influence. The things that you see, wind up influencing the things that you do. My father’s work was very abstract in the years that I was growing up. It was about a willingness to look at and appreciate form, just for the sake of form. Form that doesn’t mean anything but which seems to have the ability to evoke something. It’s a process of taking something that’s very realistic and very mimetic and turning it into something abstract by a process of compression. Maybe abstraction is just a compressed form of the mimetic impulse. Through my mother’s work, I got exposed to things like surfaces. My parents were local guardians to a young architect, and I saw a lot of architecture, which seemed quite interesting. Then I saw the works of design students, (it was not called design back then, it was called applied art) in Baroda. There were some extremely talented designers working there and they would show up and ask my father for his opinion and his advice, and he would give it. It was a free-floating, inter-disciplinary thing. After all, design education was then forming and NID had just been born.

Tell us about your interest in calligraphy and type.
My interest in calligraphy started in school by accident. The accident is that in the 1960s, English education authorities had started getting affected by what you would call early 20th century revival of the italic hand—a historical buried hand. The efforts of Edward Johnston started the revival of the Chancery hand, drawing on the wisdom of medieval ways of writing or our times—Johnston being Eric Gill’s teacher and a very influential and remarkable figure himself. You can see Johnston’s influence on Gill’s and other European type designers like Spiekermann writ large. So schools began to teach italic writing as a recommended way for people to write and because of that, in British Council exchange programmes, teachers went and learnt the Italic hand, they brought it back and then, there was a man called David Horsburgh who came to India around 1950, began working as an English teacher and established a school near Rishi Valley, where I was studying. In fact he taught at Rishi Valley. David wrote these instructional text books on how to learn italic writing. He taught himself, became part of that whole revival and produced books which I began to use. Through following that thing of the italic hand, I chanced upon typography. So the way I teach letterform is through the italic hand, with the use of a broad-edged tool for drawing italic, roman and other forms of letters. It’s a great way to learn the structure of how these letters are put together. After this, I met Aurobind Patel, and it was like meeting somebody who has known you for, say, 500 years and it’s like somebody saying, ‘I have been waiting for you, where have you been?’ I started to do some work for India Today. He encouraged me, gave me books. I did some important illustrations for India Today, briefly tried to pursue a career in type design [it was not easy to do so then] thought the better of it and went back to graphic design. I’m happy to say that I’ve learnt a lot from a stream of people and from people who have worked for me. They all exposed me to new things and that’s how I try and keep a step ahead of them.

What, according to you, should design do?
I have been working towards expanding the horizon of what design can and should do. Designers should stop crying and saying that nobody cares for design and start showing that people do and that’s the tough part. The best route is through business. I consider business a part of the design world now. I don’t see it separately. I find it odd when people say, ‘I don’t like the business part of it, I like the design part.’ It’s all the same. Design is business, and design is marketing, and mar¬keting is not a negative form of manipulation. It is about things that people value and want. Many people are content to do the design part; however, some people move to thinking about what they are designing—what will make the greatest impact in the business. So that chain—starting from somebody’s business, or life, or objectives and when I say business I am using the word very broadly. So that translates to saying: what can design do that’s very imaginative? You have to figure out how you are going to make this businessperson understand that and for that, you’ll have to do some work. Then you jointly agree, and say these are the things we should attack. Then you see what the criterion are and then you do the design. It’s moving several steps up above the problem. So managing a brand, is managing the tension between change and continuity and figuring out how you will gain most from it in the long and short term.

The mixed-media artist delves into her tryst with time and nature.

We explore the artistry of the mixed-media artist, who reinterprets her conscious and subconscious mind in a tangible form through her art.

Eclectic. Vibrant. Quirky. Homegrown lifestyle label Artychoke is an amalgamation of traditional techniques, with the beauty of art.

Typography artist Pragun Agarwal delves into his artistry, creative process, and plans for the future.

We explore the Wabi Sabi inspired practice of the architecture and interior firm by Meetu Akali, based in Goa.

In conversation with the duo behind the multidisciplinary architecture and urban design firm about their practice, sustainability in design, and more.

In memory of the design pioneer who passed away yesterday, we revisit our conversation with him, full of lessons from his inspiring life.