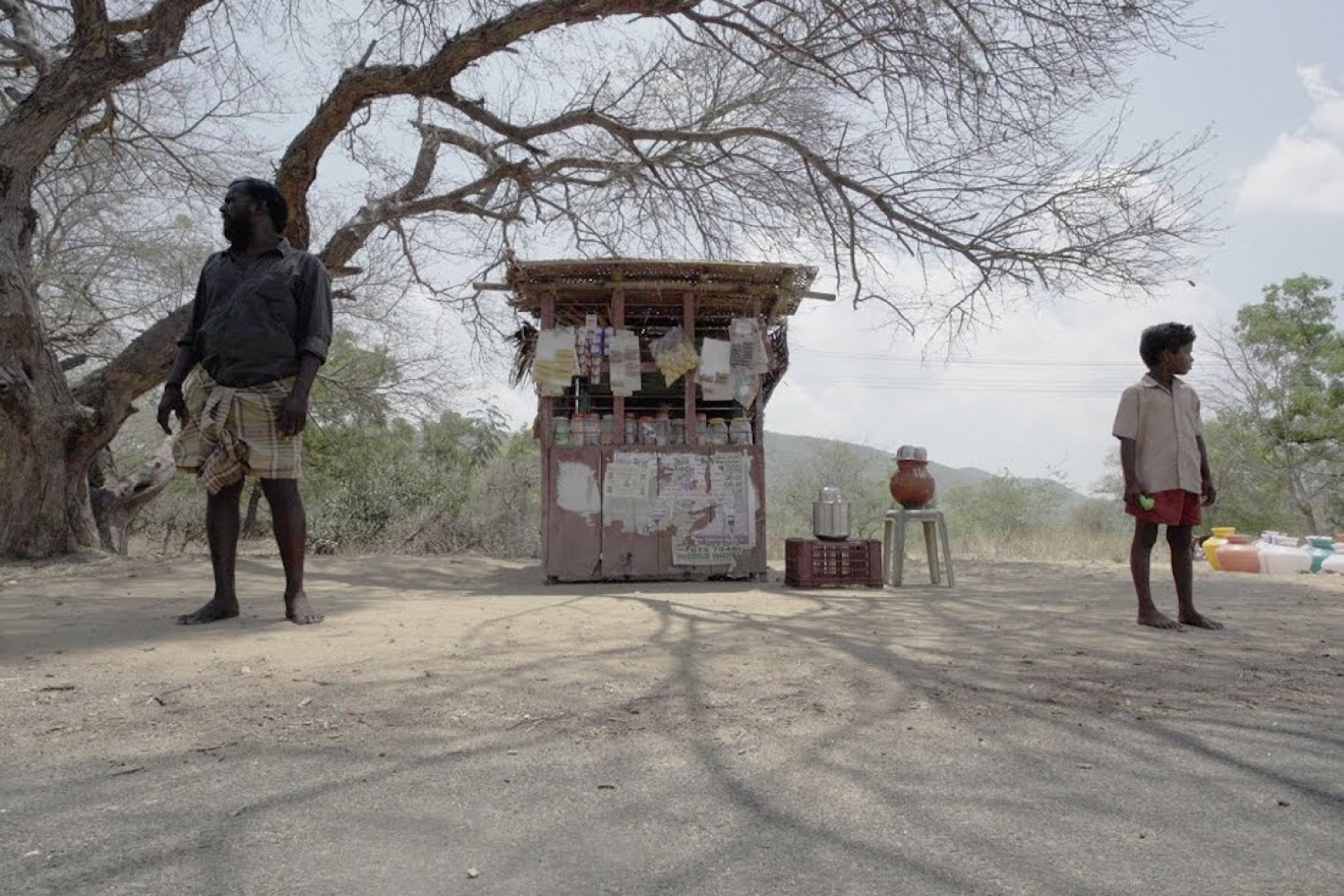 A hamlet in Tamil Nadu. A father, a son. A hot summer day. Barren lands, despairing trees, stale trails. A long journey and a whirlwind of emotions. Vinothraj PS’s debut, ‘Koozhangal’/‘Pebbles’, which won the top prize at the International Film Festival Rotterdam, is about a day in the life of a village where lands run dry, turning farmers into hunters. The film is a powerful work, relying on the magic of visual storytelling. The movie follows Ganpathy, a noxious father, who embarks upon a journey in the punishing heat with his reluctant son in the hope of winning back his estranged wife.

The film and its heritage are incredibly interesting. Vinothraj has loosely based the film on the life of his younger sister, hurled out of her own home one night by her drunk husband, the film set in the very place they used to live. The location is an integral character of its own in the film. The cast comprised non-professionals and were chosen from villages in the region—except the actor who plays Ganpathy.

When the film was halfway through its shoot, the rough footage was taken to the annual Film Bazar film production platform in Goa in 2019 where it was picked up by Tamil director Ram, whose own credits include ‘Peranbu’ and ‘Taramani’. More importantly, Ram partnered Vinothraj with Rowdy Pictures, which is run by the Tamil movie star Nayanthara and director Vignesh Shivan who helped complete the film.

What makes Vinothraj PS so unique as a director is the fact that he has had no formal education in filmmaking and made only a few shorts before his debut film. From being a child in Melur, working at a textile factory when he was just ten, to his having shifted away in search of a better life, he has found his passion and skill and moved audiences living shores away. He broke down the various aspects of the film for us.

THE STARTING POINT
The seed of the idea for this film was sown after my sister came home one night after being thrown out of the house by her husband. It made me angry and agitated to say the least. But I was unable to express it or show anger at my brother-in-law even. I convinced my sister that her son will question all the actions of his father when he grows up. Since my sister walked through fourteen kilometres, I wanted to take a revenge on my brother-in-law by making him walk through on hot summer in these terrains and hoped that he would understand the pain suffered by my sister. And the script idea was born. As I started writing the script, I felt this is the story of many people. My brother- in-law isn’t a bad guy. So, I wanted to know what made him so rude and aggressive on my sister. I started realising that the environment in which they live in made them very aggressive. This made me strongly believe that time, space and environment influence the behavioural characteristics of an individual. Men with fewer opportunities, venting out their frustration on the women were the daily affairs of most of the women living in remote villages. And the hope that women had that things will be better someday kept thefamily together. This compelled me to make it into a feature film.

THE LOCATION
The inspiration of the script was from an incident from this location. So, I started writing my script from these locations and decided that the filming has to be done in these locations. I met a lot of people and walked through these terrains for several days. I strongly believed that the location is another character in the film as it was the landscape which determined the actions of the individuals. The landscape drove my writing process and it gave the staging of every sequence. If at all this script has to be made, I was certain that it has to be made in this location irrespective of the logistics issues. Else, I decided to wait for it to happen. Thanks to the crew for their support without who ‘Pebbles’ would not have happened.

I decided to shoot the entire film during a hot summer in the month of May. It was extremely hot and the temperatures were soaring above forty two degrees. There were several challenges. The camera heated up frequently. Every crew member had to walk barefoot as we had sync sound in place. There were no shades around and the rocky hills were hot like a pan on a stove. The air was as hot as the air coming out of a burning furnace. Every crew member had to face the wrath of the sun and it caused extreme frustration and mugginess. It was highly challenging but when the crew saw the footages at the end of the day and that kept us motivated to complete the film.

THE CASTING PROCESS
When I had the idea of the story and started writing the script, like any other filmmaker, I too, wanted to cast professional actors. But then in the course of the script writing, I realised that the only people who came from these very environments would do justice to the role and would understand the purpose of making this film, thereby bringing in theright emotions.

As soon as I completed the script, it was actor, Karuththadaiyaan who filled my thoughts for the role of Ganpathy, the father. I had an acquaintance with him while I was working with Manal Magudi Theatre Troupe. He was a theatre actor and also a poet who has published few books. During my tenure with Manal Magudi, I was amazed at his transformation on stage, his body language and his emotional outbursts. Three things convinced me that Karuththadaiyaan would be the perfect choice. Firstly, the fathercharacter in the script required the rage and the frustration that often drives the people crazy in these environments and I strongly believed that Karuththadaiyaan would be able to pull it off with ease. Secondly, the skin tone of Karuththadaiyaan is similar to the men whom I have seen from my childhood. It has a beauty to it. Thirdly, he is from down South, Tamil Nadu too, who has lived in such terrains. He was hesitant to act in films at first, however I chased him for days but glad he said yes to the film.

For the son’s character, we had auditioned close to seventy kids from the villages in and around Madurai. But I wasn’t convinced with any of them. This character hardly speaks in the film but has to carry the entire script on its shoulders. Later, I fine-tuned my search for the kids by identifying families similar to my script. Of all those kids from such families, when I met Chellapandi, it immediately struck me that he is the perfect kid for the role. He was very responsible and the affection that he had showed to his mother and his baby sister was like an adult caring for his family. His real life is much more painful than the one in the script. So, I believed that he would be able to understand the emo- tions. And he brought out all sorts of emotions and the innocence that I had written in the script.

The challenge for all the actors was the fear of the camera. We got rid of the fear by continuous rehearsals with them. On the other hand, professional actors would have found it very difficult as these terrains are capable of influencing one’s behaviour but as these people were well aware of these terrains, I was able to complete the filming as planned.

This article is an all exclusive from our Bookazine to read more such articles grab your copy here.