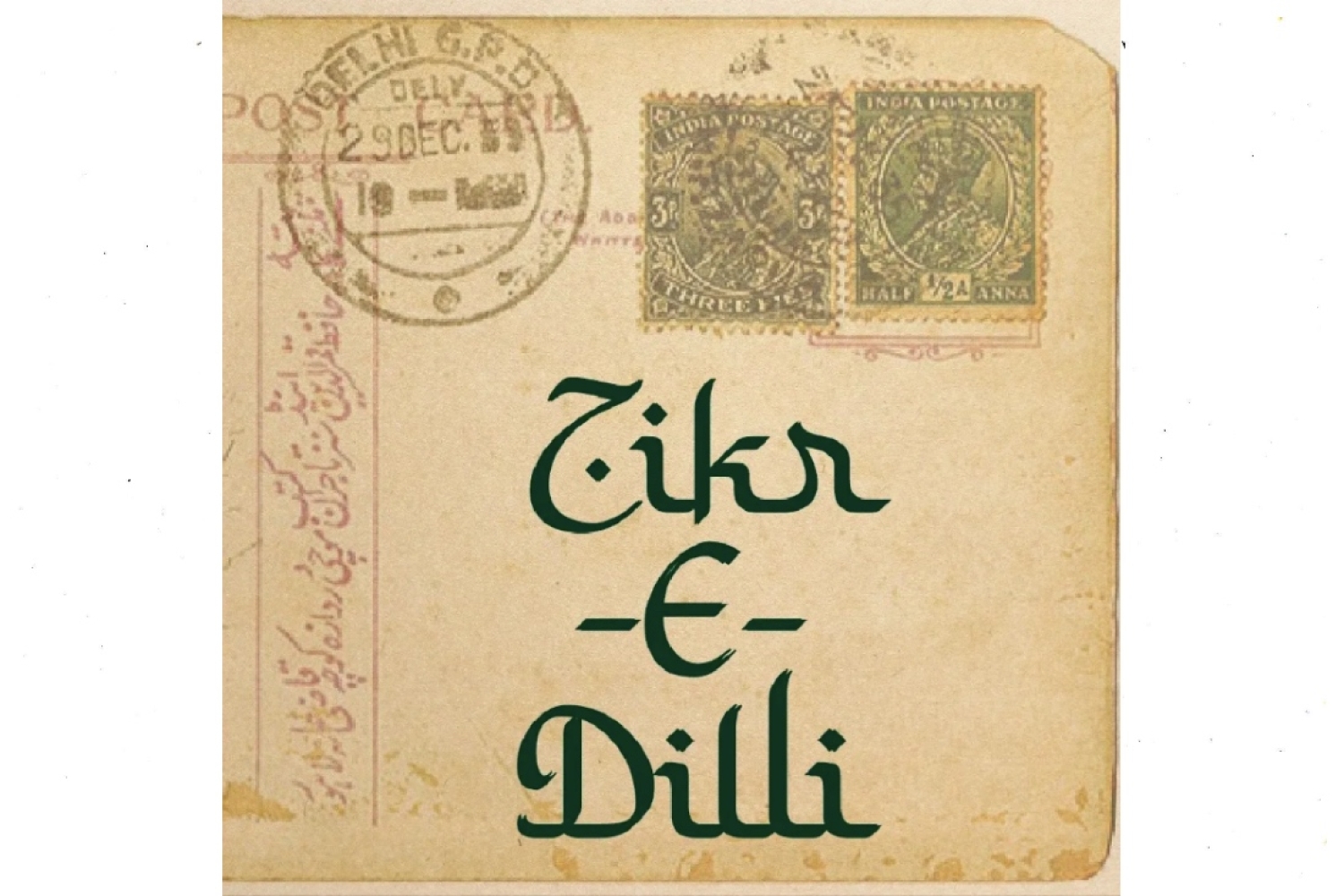 Founded in June of 2020 by Anukriti Gupta and Tanuja Bhakuni, Zikr-e-Dilli is a digital depository of material-spatial memories, history and narratives of the city of Delhi. Its ongoing project, Living Museum of Delhi, curated by Anukriti, is a submission based digital archive, which interprets and preserves the richness and depth of the city through its inhabitants' memories around city-space and materials.

We are in conversation with the duo behind the initiative below.

What was the first memory of Delhi that prompted the conception of Zikr-e-Dilli?
Anukriti: Delhi is a story of continuity, and its inhabitants have preserved that continuity in their memories. The story of Zikr-e-Dilli’s conception is not very different from that. I believe our own contingent memories and experiences of the city motivated us to conceptualise the idea of Zikr-e-Dilli. I arrived in Delhi twelve years ago to pursue a Bachelor’s degree in English Literature at Lady Shri Ram College, and over the years, my understanding of the city has evolved. For me, Zikr-e-Dilli is an attempt to engage with the amalgamation of several memories — memories of different periods, people, and places in Delhi. The idea of Delhi(s) and not one Delhi excites me the most.

Tanuja: While I have lived in the NCR since my childhood, it was during my Bachelor’s degree from Lady Shri Ram College that I began to experience the city of Delhi as a young-adult woman. For the last several years, prior to the launch of Zikr-e-Dilli on Instagram, we often discussed the content that was available on mainstream media and social media platforms. Most of it was limited in its approach — strictly categorised in terms of history, culture, politics, fashion, food, and people — at times, creating and feeding into the homogenous, stereotyped, and prejudiced narratives, ideas, and sketches of the city. The beginning of the pandemic gave us the opportunity to work on our idea of the city.

The recollection of Delhi through numerous narratives and memories remains central to our idea of Zikr-e-Dilli. It is the notion of “Zikr” or remembrance that inspires us to narrate the stories of Dilli; and many Dillis find utterance in the thoughts, memories, desires, and dreams of its denizens.

What part of this ‘recollection’ process is the most tedious?
A: One of the most interesting aspects of Zikr-e-Dilli is finding a balance between the personal anecdotes and factual information. Most of our stories locate the narrative historically and spatially, providing a background to the content. I believe the work involved in the ongoing project, Living Museum of Delhi, has been the most challenging for me, if not tedious.

I conceptualised Living Museum of Delhi in March of 2021, almost a year after the launch of Zikr-e-Dilli. The research involved in writing the stories requires long hours of archival work, which includes long conversations with the participants, interviewing and recording their recollections of Delhi, and engaging with the photographs and texts they provide. Sometimes, these interviews are done over several weeks to understand how the participant remembers their city. The idea of Delhi may be different for different people and yet, collective memory is an important aspect of understanding the city-space.

T: The process of “recollection” has simultaneously been both fascinating and laborious. We refer to multiple sources and references like photographs, literature, films, paintings, performances, letters, postcards, and music in our attempt to curate a detailed, engrossing, and rich sketch of the city. I also refer to my own memories, and experiences of inhabiting the city for years now, the numerous spaces including the public spaces like DTC buses, Ambedkar University Delhi at Kashmere Gate.

Since we began Zikr-e-Dilli during the pandemic, much of our material and sources have been limited to online photo archives, libraries, books, and articles, and at times it is difficult to get hold of detailed accounts and anecdotes around events, people, space, and material objects. Many histories and memories remain unrecorded, forgotten, and at times omitted. Living Museum of Delhi has thus been significant to on-ground research for personal and collective recollection of Delhi.

Women’s spaces and memories occupy a large part of the dialogue even today. What, to you, is the most poignant space of women’s culture in Delhi?
A: When it comes to discussing personal narratives, gender has been an important category for understanding the city. From discussing dowry deaths and feminist street theatre in Delhi during 1970-80s, to discussing women and public transport, I have looked at Delhi as a gendered space. With Delhi in the backdrop, Amrita Pritam’s novel, Dilli Ki Galiyan, portrays how women negotiate the city-space physically, emotionally and materially. One such site of engagement can be women’s negotiations with public spaces in the capital through the reserved metro coach of Delhi Metro. These negotiations brought up questions around how inclusive the reserved coach is and how accommodating it can be for different classes and genders.

The idea of public spaces being flooded by more women alters the very look and feel of the capital, keeping in mind the options available to women to occupy more and more public spaces in Delhi. Social media has always been charged up with the debates around reserving spaces for women or providing them the option of not paying for public transport. Very often, the popular narrative against these moves do not take into consideration that women constitute only eleven per cent of the workforce in Delhi, or the gender pay-gap, or how many women from low-income families are accessing public transportation.

T: For us, gender has been a significant category in exploring and understanding the city. This has also been influenced by our own identities, location, as well as our academic training and journey as scholars of Gender and Women Studies. Through our discussion of the history and politics of India’s first feminist publishing house, Kali for Women in Delhi, women’s colleges in Delhi University, women’s movement and organization both in its early phase and contemporary to women writers, artists, and poets’ imagination and experience of the city, we look at Delhi as a gendered city-space.

For me, the women’s colleges in Delhi have been quite an interesting “women’s space”. My personal experience and memory of occupying the space at Lady Shri Ram College remains significant to my journey of understanding the city and myself. Interestingly, one of the first posts on women’s college received an overwhelming response and went viral within a few hours. Many comments were from young women who were part of all-women institutions and spaces. They were able to relate to the post and further added their own experience, narratives, and memories of the space. While these women’s spaces do speak of confidence, security, and solidarity, nonetheless, these spaces cannot be romanticised and homogenised in terms of experiences and memories. It is important to look at these spaces through the lens of intersectionality and how questions of caste, religion and class are often overlooked within these “inclusive” spaces.

Delhi has been the epicentre of revolution on many occasions and fronts. Can Zikr- E-Dilli be considered a force that leads to educate rather than to instigate?
A: Zikr-e-Dilli attempts to engage, rather than educate or instigate. Zikr-e-Dilli archives the different moments of revolutions and resistances this city has seen, and engages with different ways of looking at Delhi’s rich and diverse history. Seven empires have risen and fallen by the side of the Yamuna; and there are several similarities, continuities and commonalities between these seven cities of Delhi. At Zikr-e-Dilli, the city becomes the stage for memorial performance, and memories often define the physical settings of events through the activities that are enacted at them.

I want the readers to see Delhi as a heterogenous and contingent space, built over centuries and through people from diverse walks of life. In the future, I would like to publish Zikr-e-Dilli’s stories as a ‘memory-guide of Delhi’. It would be an attempt to depart from the traditional ways of knowing the city through tourist guide-books and maps. As I have often emphasised, Zikr-e-Dilli draws a map of its own, a map of recollections.

T: Through Zikr-e-Dilli, I envision creating an engaging, accessible, and interactive public record of collective memory where the readers could get insights into the numerous histories, spaces, cultures, and politics of the city. I would resist both “educate” and “instigate” with reference to Zikr-e-Dilli; rather the idea is to offer the readers an alternative narrative of the city, scripted through the heterogenous histories and memories of its inhabitants. My attempt is to shift away from the idea of static history writing and reading of the city, and rather look at the city as a “living” space that is constantly evolving and has multiple layers to its storytelling.

Zikr-e-Dilli provides the readers with a new lens of looking at Delhi — not just one Delhi but multiple Delhis and how they interact with each other in interesting ways. I want to push the readers to think outside the box. In a constantly transforming city like Delhi, everyday spaces and material objects could hold interesting histories and memories that are significant in building a heterogenous understanding of Delhi, and ourselves. It could be an old photograph from a family trip they took as children, or the everyday spaces of college, university, and home that they inhabit/inhabited, or a postcard/letter that they found tucked in their parents’ closet. Through Zikr-e-Dilli, we attempt to create a window to peek into this kaleidoscopic city.