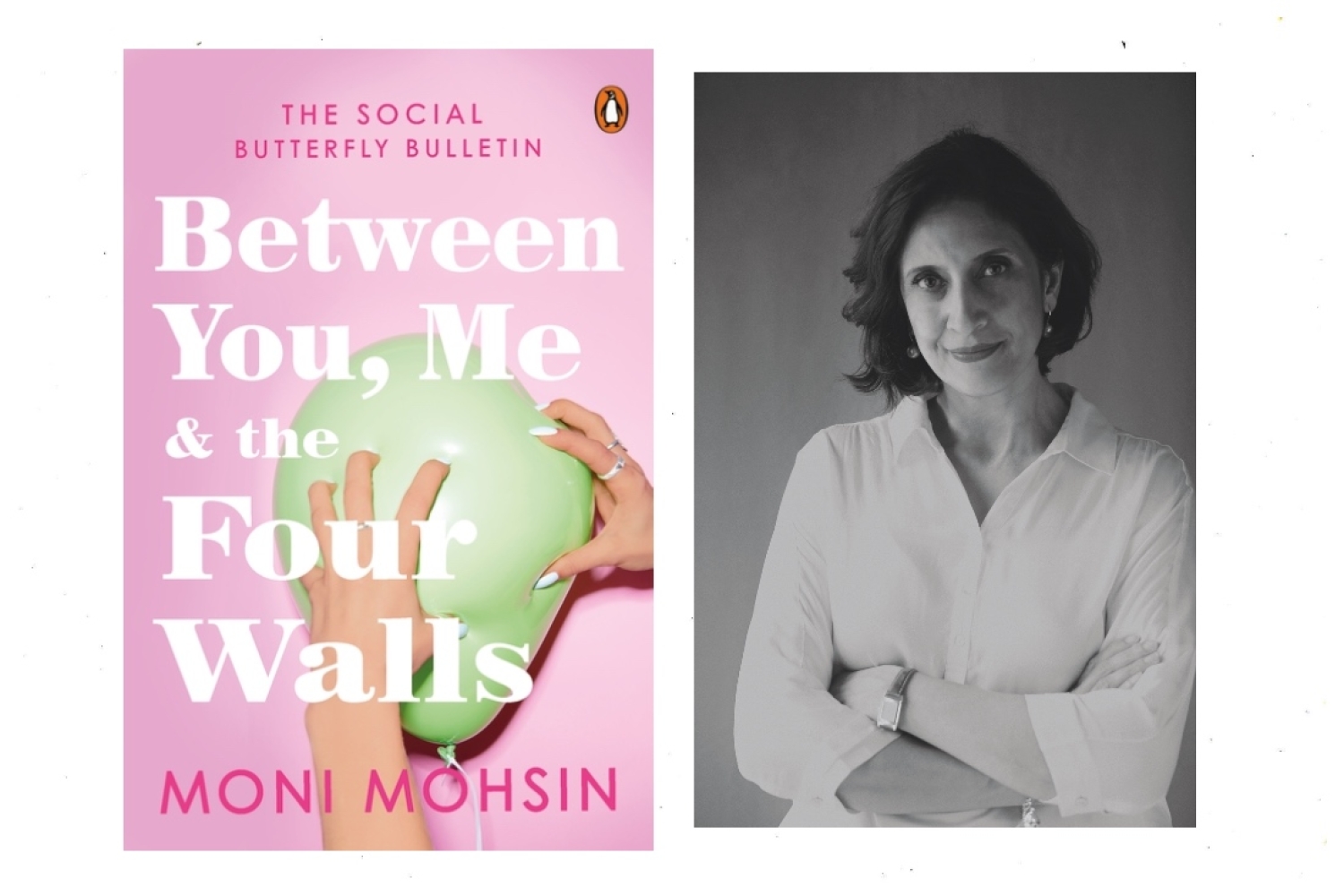 “I use satire to communicate thoughts about difficult social and political issues because humour lowers the defences of my readers and makes the truth more palatable. And I personally don’t like reading preachy stuff so I try to steer clear of it in my writing as well,” declares Moni Mohsin, the writer behind the acclaimed Social Butterfly series. Beginning with The Diary of a Social Butterfly, which was released back in 2008, through the character of Social Butterfly, a noveau rich socialite, the author provided us with entertaining yet biting observations of the political milieu. And by bringing back the memorable character and her witticisms once again through Between You, Me and the Four Walls: The Social Butterfly Bulletin, we now get to read the diary of Social Butterfly from the year 2014 to 2021.

Below, by answering five quick questions, the author tells us more about her popular creation and the new book:

What did the creative process behind writing Between You, Me and the Four Walls: The Social Butterfly Bulletin entail?
First and foremost it had to ring true. And therefore the characters that I introduced, their concerns, the world they inhabited, the language they used all had to sound authentic and credible. Though of course I use exaggeration for satirical effect, it was important to me that my readers believe my account of these fictitious characters and their world. So the creative process involved, as with most fiction writers, careful observation of my subjects and acute listening!

The book covers a long timeline. What factors informed your decisions regarding what issues to include in the book and what to omit?
I watch very closely news and events in Pakistan and from these I filter what would be of concern to the Butterfly and how. So she might not know or be curious about the reasons for Pakistan’s acute energy shortage but she does care about the fuel bills for her generator! Similarly she might not be following the growing victimisation of minorities as an issue of concern, until her cleaning lady is affected. She does not read very much and doesn’t care for literary discussions so I never talk about my own interest in what’s new and interesting in the publishing world but she does attend literary festivals because she feels its cool to be seen there. So my choice of what to include or omit is guided entirely by her tastes and inclinations!

It has been more than a decade since The Diary of a Social Butterfly released, how has the titular character, and her voice and composition, evolved for you?
I conceived of the Social Butterfly as a character not dis- similar to Bertie Wooster, in that much happens to her but because she inhabits a privileged bubble and she’s not the brightest bulb in the chandelier, her essential preoccupations and spirit remain unaltered. So although she has flashes of insight and inspiration from time to time, she doesn’t really evolve away from her passion for shopping and socialising. That said, as political, economic and environmental issues like the rise of populism, the pandemic, global warming and inflation have rocked the world, so I have tried to show how they have impacted her, albeit safe, protected, world and affected her relationships.

And what had led to the conception of The Diary of a Social Butterfly initially?
I conceived of The Diary of a Social Butterfly when I was casting about for a new idea for a column for The Friday Times, a weekly newspaper for which I worked at the time in Lahore. My brief was to comment on social issues. The tone, I was told, must be light but the observations sharp and the style novel. It was around then that I attended a lunch party in Lahore and overhead a conversation between two society ladies. It was a cool winter’s day but sunny. One lady was wrapped in a very expensive shahtoosh and the other was wearing a chiffon sari with a skimpy blouse.

The shahtoosh-wrapped lady was bragging about her shawl, claiming that she only ever bought seven yard shahtooshes and that she had three. When she asked the lady in the sari how many shahtoosh shawls she had in a slightly pitying tone, the latter flicked her long blow dried hair over her shoulder and murmured, “I don’t wear shawls jaani, because bilkull maidservants waali look aa jati hai.” It was a light bulb moment for me. I immediately realised that these were the people I needed to satirize and theirs was the language and tone I needed to adopt. And so The Diary of a Social Butterfly was born.

Lastly, what are you working on next?
I’m writing a funny novel about the desi diaspora in London.

This article is an al exclusive from our October EZ. To read more such articles, follow the link here.