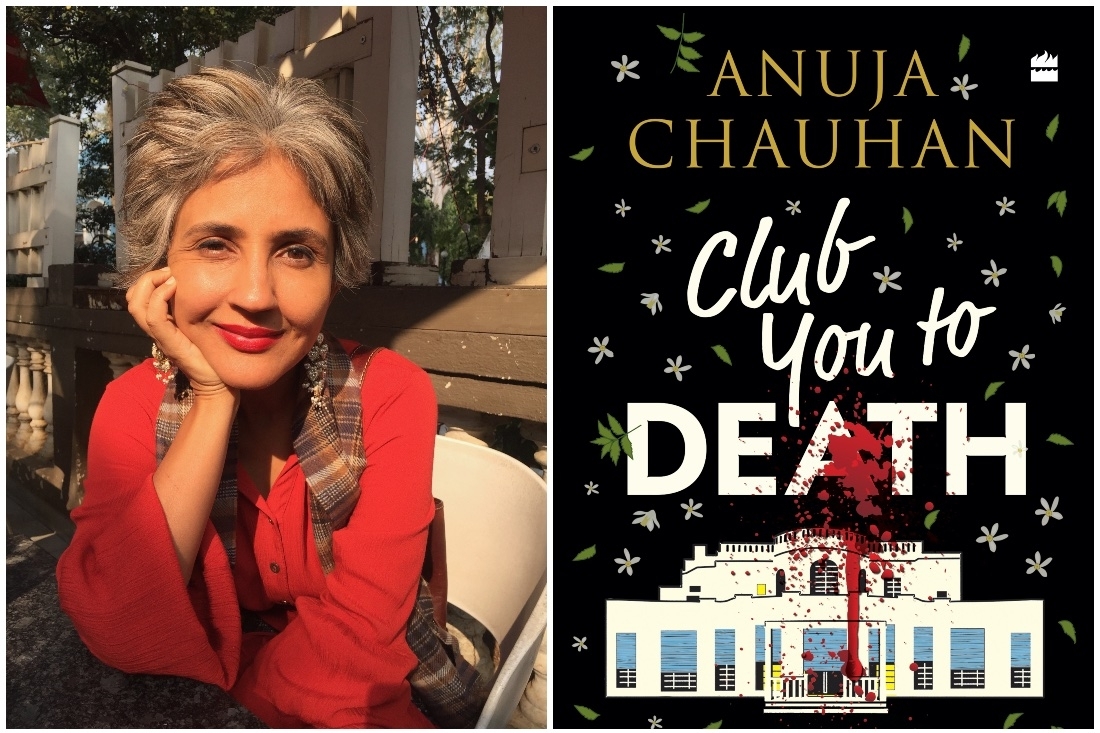 If one has ever read an Anuja Chauhan novel in their life, then they would be well acquainted with the fact that the author has a knack for carefully crafting some of the most punctilious dialogues. They’re razor sharp, laden with wit and humour, blazing with colours and words that persuade one to feel alive within the narrative and sink deeper into it. The Anuja Chauhan world is quirky, relatable and almost never shies away from its contextual politics or asserting a stance. As the author returns with Club You To Death, we revisit her world with a whodunit mystery, where one finds themselves traversing with Dilliwallahs ACP Bhavani and ex lovers Kashi and Bambi, as they look for the person murdered the personal trainer of the elitist Delhi Turf Club. As we meet the boozy Delhi aunties with their conspiracy theories and experience the soft simmering tension between Kashi and Bambi, one can’t help but marvel at how easy it is to get drawn into the author’s prose.

We’re in conversation with Anuja as she tells us more about her creative process and how the novel was conceived, amongst other things.

After all these years, how would you describe your relationship with writing now?
We’re in a well-oiled and functioning marriage now, writing and me. The honeymoon phase is over, there’s been a few rocky phases but overall, there’s a comfortable sense of fulfilment and a certain amount of fond taking-each-other-for-granted...But we keep having babies regularly, so it’s cool, really.

What kind of authors or books have influenced you and your work the most?
I like funny romantic books best, and after that I like funny books. Romantic books which are not funny — like say, Gone with the Wind — I do not like AT ALL. Funny books which are not romantic, like say, Catch 22, but which make you think a lot, and have so much in them to unpack and absorb, are books I really love. I read books for plot, and I also read books for funny, flawed, yet sympathetic characters. If a book is compelling and unputdownable I will read it, but if they’re no interesting characters or toe-tingly romantic bits or amazingly witty observations or dialogue, then I will never reread it. My favourite books and influences are books that are re-readable, the kind you return to again and again.

Take us back to the moment Club You To Death was conceived.
There was no one definite moment, but several. The story of Bambi and Kashi had been slow-cooking in my head for a long time — ex-lovers with a lot of history and resentment, and no proper closure. I hadn’t written anything like that before, my stories usually follow the girl meets boy format and I had started feeling a bit trapped with that.

There’s been a shift in genres. Could you take us through your creative process of constructing a whodunnit?
Whodunnits are constructed backwards, I think. Like the first thing I settled upon was who the killer was going to be. And then I set about hiding the killer’s tracks. It’s like first you bury a treasure really deep, and then you cover it with mud, and then you grow grass over the mud, and then you pull a carpet over the grass, and then you place a table over the carpet, and then some books and curios and bric-a-brac so nobody knows there’s a treasure buried there. But then you have to carefully leave a small stain on the carpet so that the very clever reader (as well as your detective) will spot it, and then start searching. You have to hide things very well, but also still leave in clues for the clever sleuths to find.

How did you find and build your characters, especially Bambi, Kashi and Bhavani Singh?
I was very clear I wanted a genial uncle ji type of sleuth — a mild-mannered, sympathetic man, a father of daughters, whose superpower is listening to people, really really listening to them. I’m a little sick of the macho, alpha male, slap-happy Dabanng type of cops one sees in popular cinema and OTTs. So I modelled Bhavani on one of my older cousins and made him all brown and square and homely, but also extremely sharp, and capable of taking command when he has to. Bhavani is touching sixty and is very comfortable in himself, he has no points to prove, he doesn’t grandstand or swagger at all.

Kashi Dogra is a boy from a boys boarding school and women are a bit of a mystery to him. He needs his big sister’s help in comprehending them. He’s a decent guy, and he’s deeply loyal. Loyalty is his most defining quality. Bambi Todi is drawn from so many of my daughter’s schoolmates! She’s both fickle and faithful and I loved that quality about her.

Delhi usually has a prominent presence in your narratives. Tell us about your relationship with the city as a writer.
Delhi is home. I’m a Delhi girl, my roots and my ethos and my (potty mouthed) language is all Delhi. My parents are from U.P. and Haryana/Rajasthan, and they were a fauji couple, who brought us up in cantonments all over India, and my husband in Mangalorean Catholic, and our kids grew up in the Lutyens zone and Gurgaon, and I live in Bangalore now. But my dadaji’s family home has stood on New Rohtak Road in the thick of Central Delhi for over ninety years now and that’s where I’m from. Every time I sit down to write, the smog and the dust and the filth and the flowers and the markets and the din and the mouldering monuments, creep back into my writing willy-nilly. I’ve stopped fighting it now.

Finally how have you been dealing with the pandemic and what’s coming up next?
I dealt with the pandemic by ignoring it completely. I wrote like a maniac, and enjoyed the family time (all our grownup children are working and studying from home now) and the cooking and the cleaning, and the fostering and placement of two litters of mongrel puppies, but I’m lucky enough to live far out of the city so the masks and the social distancing never became too much of an issue. The news on the television was more problematic, so I dealt with that by writing about it (in my columns, not my books!)

On the work front, I’ve just been commissioned to write a new movie screenplay. The Disney-Hotstar adaptation of Those Pricey Thakur Girls should be out this summer, as well as the film Sardar & Grandson, starring Neena Gupta, Arjun Kapoor and John Abraham, whose screenplay I wrote along with director Kashvie Nair.

In conversation with the Delhi based poet about his relationship with the city and The Community Library Project.