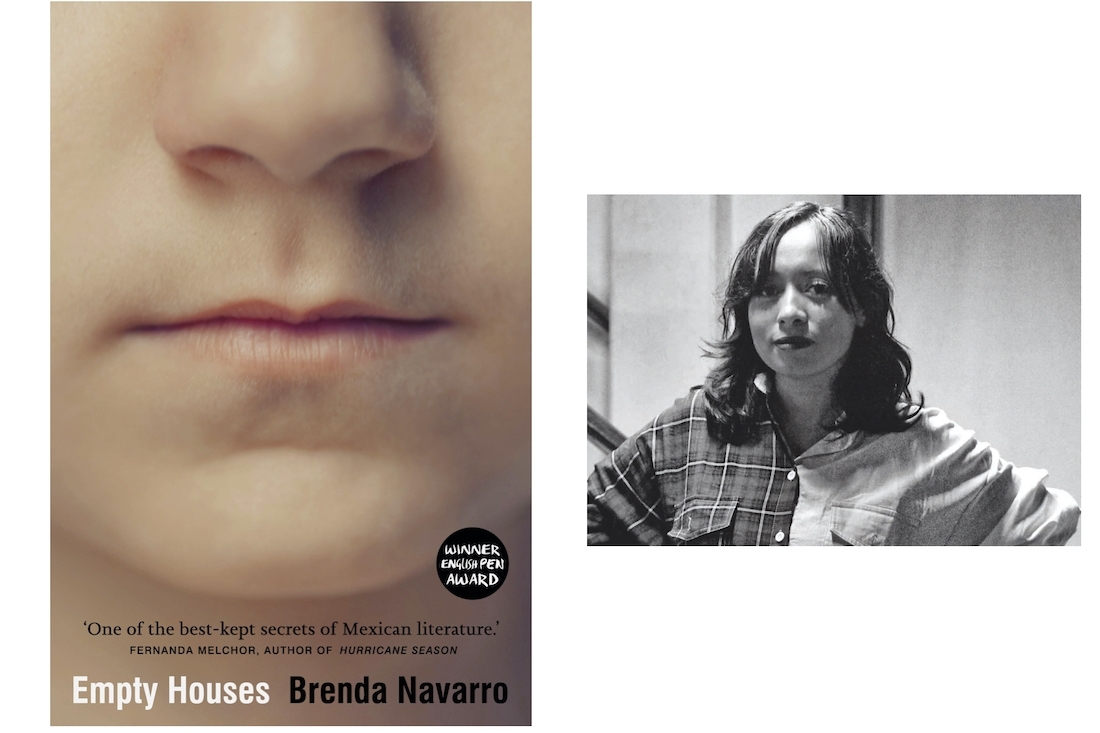 THE WRITER
Brenda Navarro stumbled into writing quite by accident, almost serendipitously, “I never thought I could dedicate myself to writing professionally,” she laughs as she describes how she attended a literature workshop, unbeknownst to her that one of her texts would be praised by the teacher, leading her to realise that writing may be well worth pursuing. Her debut book, ‘Empty Houses’, was a personal challenge of writing a novel, redefining what is categorised as literature and what is not. Being a writer for her includes championing women and communities who have been unable to talk about their own works, “My relationship with writing has two sides. On the one hand, looking for writing a good story and on the other is fighting to have conversations with my colleagues about better rights, especially in my countries; Mexico and Spain.”

Agota Kristof is her favourite writer. “Kristof’s literature and her personal life have a lot to tell us right now as a society,” she reveals. The work of Wislawa Szymborska is also an essential influence for her and from Elfriede Jelinek, she learned that we don’t need to be shy of rawness — conversely, we need to deepen in the human condition and meet it head on.

THE BOOK
‘Empty Houses’ takes place in the aftermath of a shocking incident: a child has disappeared from the park where he was playing. His mother is distraught, caught between being tormented by his absence but also by her ambivalence: did she even want him in the first place? In a working class neighbourhood, on the other side of Mexico City, another woman fiercely protects hers, one for whom she has been longing all her life. ‘Empty Houses’ switches between the voices of these two women, exploring the desires, regrets and social pressures of motherhood. Translated into English by Sophie Hughes, the book is poised for release in February 2021 by Daunt Books.

THE INSPIRATION
“I wanted to write a story about the different acts of violence that women experi- ence in Mexico and also globally,” says Brenda. Her university education in sociology and feminist economy piqued her interest in violence against women leading her to wanting to escape from academic language and speak with intimacy of two women who, in different ways, feel empty and seek to fill themselves with dreams and ideas that do not even belong to them. “I was also interested in doing in-depth research through the language about the pain and dealing of what is a significant issue in Mexico. There are thousands of people missing and there is no such thing as an original route to repair the damage socially. This harm and its relationship with families, with mothers, with women, was what I was interested in investigating.”

In 2018, when she first published this novel in digital format, she was convinced that the central theme was disappearances and the implicit pain inherent in womanhood. Yet, as the book was shared, readers highlighted another significant aspect of the book. “Until that moment, to me, motherhood was not the cause but the consequence,” she surmises about her writing, that has been hugely praised for its intriguing exploration of motherhood as a thematic concern by Spanish readers.

THE PROCESS
“I would have to say that I write from the viscera: it’s something that moves me and it feels like there’s a bunch of butterflies in my stomach because that excites me a lot,” is how honestly Brenda speaks about her creative process. With ‘Empty Houses’, it began with the emergence of the first voice, then the second voice and it was a conversation between them, which she felt she was in charge of recording. “When the first voice talked about something, I was asking for an answer from the second voice: what do you have to say, second voice? And the second voice answered me and then, with her testimony, the first voice told me more things. It was a ping-pong process and I genuinely enjoyed it.”

It was for a while that she let the novel marinate in ideas and commentaries of fellow writers, only to return to the story with a more cerebral posture, to correct her mistakes, to make it more nuanced, to find the right word for each voice and situation. Essentially, she was trying to strike the balance between coherence and enjoyment. The book Los Hijos de Sánchez by Oscar Lewis, an ethnographic study about a low-income family in Mexico City, influenced Brenda while writing ‘Empty Houses’. “I also believe that a novel at the time it is published and read, ceases to be of the writer and every reader has their own aesthetic experience and that is the magic of literature,” she adds.

THE CHALLENGES
The most important challenge Brenda faced was with time. “Writing demands a space of loneliness and concentration and the routine doesn’t give you that, especially when you have to fill the refrigerator with food and pay for the apartment every month. That was the hardest part,” she says. Another momentous task was to create two charac- ters with the capacity to develop their personality through their own unique voices. She wanted to create two different worlds within the same literary universe. “It was challenging, presenting them as they were without falling into the stereotype or generating greater empathy for one or the other. Both have a painful story and both have made mistakes. Neither is good or bad because they are just two women living their lives,” she asserts.

THE FUTURE
Brenda began 2020 with writing her second novel. She was attempting to set aside at least an hour a day within her schedule to sit down and write, but, when the first lock- down in Spain was imposed, everything changed. “I think it’s not the time to write. It’s the time to listen and observe. I think this pandemic has given us a big question about what a state is in the 21st century and that’s very interesting. I also know that I am no longer the same person I was in March. I am exhausted and the pain I see worldwide affects me as a writer. I am reconceptualising my way of seeing the world. I know that my next novel is about suicide. The first question to me is what kind of life are we living and why we believe it is good to be alive. It’s the only thing that I know at this moment,” she says, leaving me with a dream about reality.

This is an exlcusive from our November Bookazine, to read more grab your copy here.