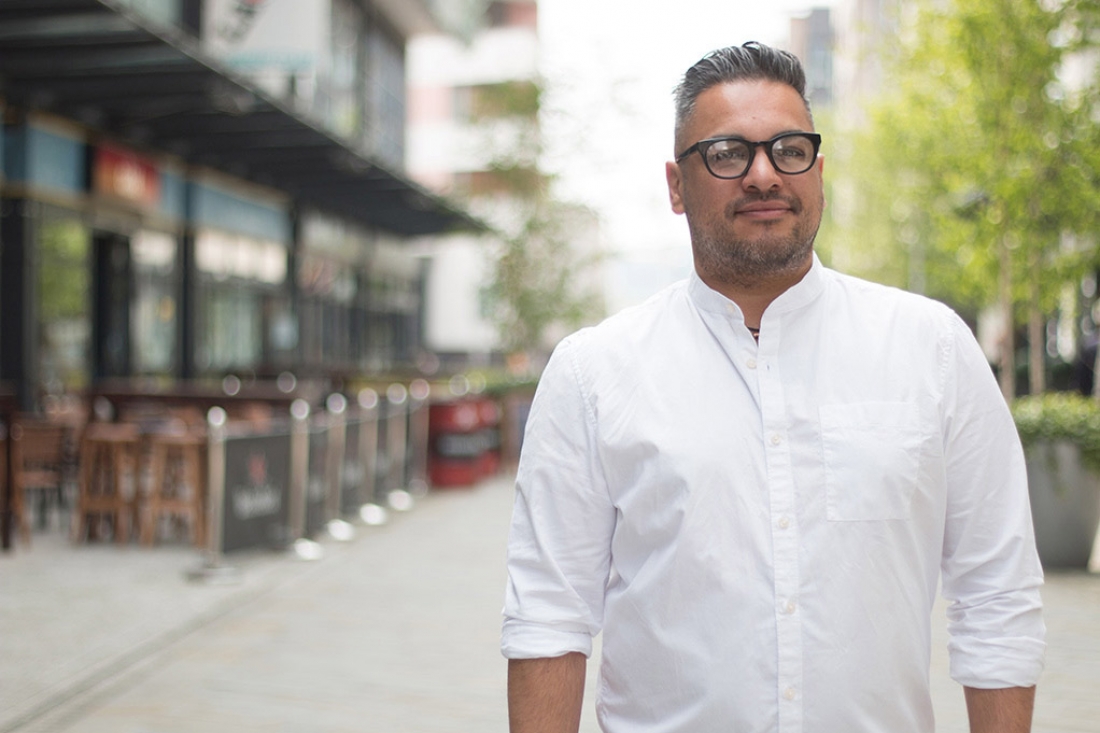 Meet the guy who made Riz Ahmed write the kickass essay on racism that had the world sit up and take notice. Nikesh Shukla, through his new crowdfunded book, The Good Immigrant, brings together people in the UK from Black, Asian and Minority Ethnic (BAME) groups to tell their stories of how there’s nothing such as a ‘post-racial’ world we know yet. The title gathers together 21 emerging BAME writers, poets, journalists and artists to confront this issue. Contributions from Musa Okwonga, Bim Adewunmi, Chimene Suleyman, Himesh Patel and many more apart from Riz, sharing compelling accounts of what it means to be ‘other’ in a country that doesn’t seem to want you, doesn’t truly accept you, needs you for its equality monitoring forms and might prefer you if you won an Olympic medal or a national baking competition.

Nikesh Shukla is the author of two novels, Coconut Unlimited [Quartet Books] which was shortlisted for the Costa First Novel Award 2010 and longlisted for the Desmond Elliott Prize 2011, and Meatspace [The Friday Project]. He is a passionate and outspoken advocate for diversity, and in 2011 he co-wrote with Kieran Yates the essay Generation Vexed: What the Riots Don’t Tell Us About Our Nation’s Youth [Random House]. His short stories have featured in numerous anthologies and magazines, and he has been writer in residence for BBC Asian Network and Royal Festival Hall. He lives in Bristol and manages the youth magazine Rife.

I connected with him about being the fearless immigrant.

When and how did your journey in writing begin?
I was a confident kid. A combination of moving to a big school from a small one where I felt lost, and an incident of racial abuse, gave me a lot of anxiety as a teenager, and as a result, I spent years, in my bedroom, transcribing rap lyrics and trying to write my own rhymes, reading comics and trying to invent my own superheroes, living in mostly imagined spaces, never going out, watching sitcom after sitcom with my mum and trying to invent my own clown-like characters.

What inspired The Good Immigrant?
Last year, I remember doing an interview for the Guardian where I was asked to share some writing tips alongside some other authors. When the piece was published, I saw in the comments that a prominent author had cussed out all of us for not being famous enough to give writing tips, and then he went on to say that maybe, cos the journalist was Asian, and we were all people of colour, maybe it’s because we were all mates. That was the last time I felt like I wanted to justify my place at the table. I had had two novels come out, done lots of positive activism about books and here I was, with my space being questioned because I was Asian. Often you find in the arts in the UK, as a person of colour, you don’t get to be anywhere because of merit. You’re there because of mates, nepotism, tokenism, diversity, etc. Basically, anything that takes away from your talent. Later on that year, I read Citizen by Claudia Rankine and Between The World And Me by Ta-Nehisi Coates. Both are incredible non-fiction meditations on what it means to be black in America today. I wondered at the time whether there was a UK equivalent, and I couldn’t see one. There wasn’t much discussion in books of race and immigration in the UK today, which was weird because there was a lot of stuff online. I told my friend Musa Okwonga, on Twitter, that I would totally read a collection of essays about race and immigration in the UK but was sad that there wouldn’t be one. He reminded me of the Chinua Achebe quote, if you don’t like the story, write your own. So I did.

What is at the core of the book?
21 individual voices telling their own stories in their own voices. My biggest role, as editor of this collection, was to get out of the way as much as possible and offer this platform to these writers to write what they wanted, telling their own stories. Much as I wanted to promote more writers of colour in UK publishing, I didn’t intend this book as a political manifesto. It’s not intended to represented every single marginalised community I can find. Instead, it’s finding twenty individual and excellent writers and asking them to tell me a story. And they did.

How did you get Riz Ahmed, Musa Okwonga, Bim Adewunmi, Chimene Suleyman, Himesh Patel and others to contribute their stories? How did you pick your 20 writers and how many initial contributions did you receive?
It was a mixture. Some of them [the ones you mentioned] were people I knew and wanted to read more from, others I’d read something from them online that sparked an idea, others were just interesting voices with an interesting story to tell. It was a mixture, really. I know lots of sick writers, and this felt like the right opportunity to give them an amazing platform. Pretty much everyone I asked ended up contributing. We had a couple of dropouts due to time commitments but ultimately, when I was putting together my ideas of who to ask, I didn’t think of them as a cohesive set, more shit hot writers.

Some in the West may consider this a rather controversial read and come with harsh criticism. What are your thoughts on this?
Is it? That’s a depressing thought, that when you ask people from marginalised communities to tell you a story, don’t pander to the white gaze, tell you their truth, give you an insight into how they came to be, and that can be seen as controversial. I suppose we are meant to be grateful for immigration, for being ‘allowed’ into the UK. I don’t think this is controversial. If anything, it’s a bunch of people no longer justifying their place at the table. That’s not controversial to me. That’s empowering. And so, if you’re going to come with criticism, first of all, read the book before you do, second of all, if your criticism is about what the book is missing in terms of voices, well, as I said, it’s not a manifesto, it’s a set of sick writers and anyway, I did the book myself, and if you think the book is missing some voices, you can pull them together and get that book out there, and if your criticism is about the content of the book, well, I can’t do anything for you. Because the writing is sick. I don’t know. It depends what the criticism is. If it’s someone getting defensive because a bunch of Diaspora kids spoke up, well, I can do nothing for them.

To slightly deviate from the book but not entirely from its subject, what is your view on Brexit?
I think it’s a mistake. I think it’s a step backwards for this country. I think that both campaigns acted utterly irresponsibly in the run up to the voting date. I think neither of those campaigns are really taking responsibility for the campaigns, what the result means for the country, how it will be executed in a proper fashion. I think that a lot of people think that they were voting to keep immigrants out of the country. I think other people voted to leave because they were misled about the money that would be saved from not being in the EU. I think it’s an unclear mess. I think now we’re in the situation we’re in, and with hate crime on the rise and my pound worth less than my monopoly money, I don’t know what will happen next, and that terrifies me.

The book was crowd-funded in just three days, which sounds unbelievable! How did it happen so quickly and what were the challenges that were faced by you and the Unbound team in the process?
A mixture of luck and timing, I guess. It all happened so quick there wasn’t really much of an opportunity to have any challenges. If anything, the speed with which it was funded shows the hunger for more diverse voices in UK publishing. It also shows that anytime anyone in publishing says that books by brown people don’t sell, what they really mean is, they don’t know how to sell books by brown people.

How did JK Rowling get interested in your book? She seems to have lent considerable support to it.
She follows one or two of the contributors on Twitter and thought it was a worthy cause, I guess.

You’re both Editor and Writer—which of the roles do you enjoy more and why?
Definitely writer. It allows you to make more mistakes, knowing someone else will pick them up. Having said that, I loved the process of commissioning the stories, working with the writers to get the best of their stories, piecing them together and then turning a set of disparate voices into a book that flowed. It was almost like putting together a mixtape. My day-job is the editor of a youth magazine called Rife, so I spend a lot of time mentoring young people.

What are you currently working on and what is next?
I’m working on a new novel, which should be out, all being well, in 2018, and another book of essays. I’m also touring a lot with the book and will, once we’ve done all the literary festivals that happen in the Autumn, be looking at taking the book into schools, libraries and smaller towns. That seems like the place where we’d have the most impact.