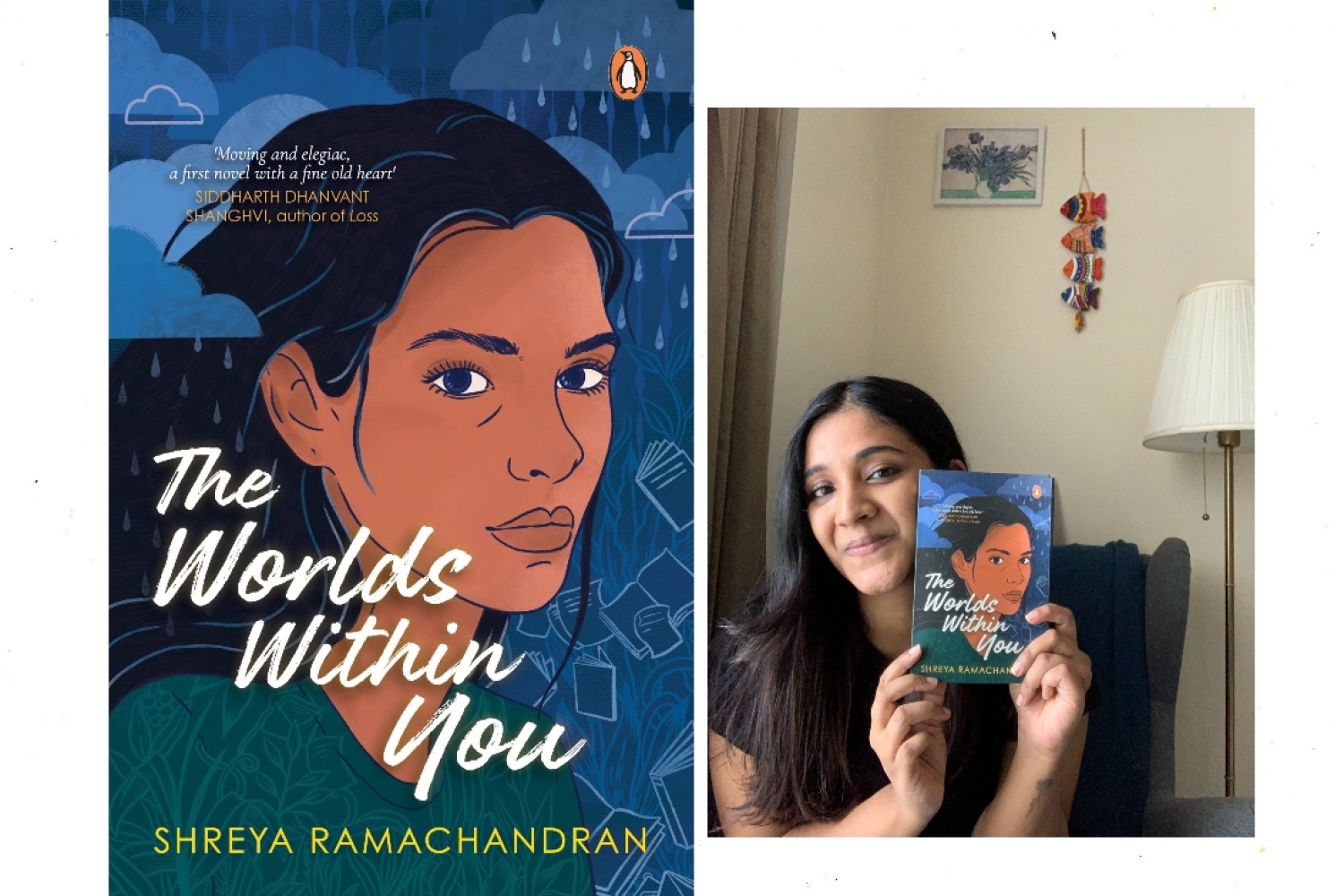 The first ever thing Shreya Ramachandran wrote was a novel that she had typed on her parents’ computer, with her sister as her first reader, when she was only twelve. She was heavily influenced by Jacqueline Wilson and Judy Blume at the time and she chuckles remembering how her novel was directly copied from Blume’s book, Here’s To You Rachel Robinson, which is about a teenager and her relationship with her parents, her brother who’s estranged from the family, and how she feels all alone. But the sense of novels being something one could write, a story you could tell and people would read it, came to her at a very young age and led to Shreya’s debut novel, The Worlds Within You. The book chronicles the journey of Ami, who has come back home in Chennai, taking a break from college in UK, and is dealing with the unprocessed trauma of her grandfather’s demise, while battling anxiety and depression, over the course of seven writing sessions. The nature of grief, unprocessed trauma, the struggles of teenagers are some of the themes interlaced in the novel, but it is the nature of caregiving for a person struggling with their mental health that Shreya emphasises the most.

She tells us about the creation of her book below:

THE INSPIRATION
The idea for this novel came to me in 2012. We were living in Delhi then, I was on a gap year and it was Diwali. So there were fireworks everywhere in the air and my cousins had come to visit us. The weather was gorgeous, lights were getting put up everywhere in the house, we were caught up in the festive preparations. My dad and uncle were sitting in the balcony so I had gone to call them. I very vividly remember, my uncle had his back to me and I could see the trees and the grey sky in the background. I heard my uncle say, ‘what is she going to do’, and I could make out that they were talking about me. And my dad was saying something like, ‘don’t know, she's saying this and that, let's see’ and my uncle was like this is the issue with kids these days.

And, I just had this moment where I thought, how when you are on a break from college or don’t know what you’re doing with your life, parents and other people think that you’re spoiled and entitled. Even people your own age have that impression. But it was a huge contrast with the reality of my experience — you don't feel entitled at all, you feel very confused, you feel very guilty, you want to try your best to make things work but you just don’t know how. So, Diwali went well but that conversation stayed in my head and many years later, for NaNoWriMo in 2016, I started writing the draft of a story on my laptop, the opening scene of which was set in Delhi where this character overhears this conversation. Most of such coming of age stories are set in the Western context, except for Americanah by Chimamanda Ngozi Adichie. I can't’ think of any such book not based in a Western setting, so I thought it would be a fun idea to express how it is like in our context.

THE PROCESS
Every day, I would wake up early and write before going to work. Even if it was the weekend, I would wake up early, have coffee and write. I knew what the story was but this resource called The Story Grid really helped in deciding things like how I should pace each chapter, pace each character, accentuate a particular scene, et cetera. I would write long rough drafts about what each character is like, would go back to the draft everyday and play around things like the college she goes to, the job her father does, the discipline she studies, until it would fit right. There are so many ‘deleted scenes’ of Ami and her mother sitting at Grand Snacks and Sweets, waiting for their tokens and talking, so figuring out the content of conversations she would have with her parents, with Sam and Alicia, was also an integral part. Every day I would write pretty much chronologically and then stop writing and not look at it for the rest of the day. Because then I would want to edit too much, but when you’re too self critical, you end up missing everything. So I would just do other things while the ideas kept coming at the back of my head. Then the next morning, when you open your laptop, you open the scene that you wrote the previous day and you know, intuitively, whether it's right or wrong.

THE INFLUENCES
There are many literary influences — R.K. Narayan, Shyam Selvadurai, Sara Suleri, Jhumpa Lahiri, Tahmima Anam, Anjum Hasan — I love her, she’s as lovely a person as splendid she is a writer —, J.D. Salinger, Hemingway, Virginia Woolf, Nick Hornby. But while writing this novel, there were two books that I specifically kept going back to. One was The Fallback Plan by Leigh Stein, which unfortunately is no longer in print. It's about this girl who moves back home to a suburb in Illinois after college and doesn't know what to do. There are many passages in that book, which are just about her experiencing those moments of being really low. Another book was The Notebooks of Malte Laurids Brigge by Rilke. It's about this character just walking through the streets of Paris and how he's feeling about his life. Again, he goes back a lot to how he felt growing up, especially some of the most anxiety ridden moments. And it was very difficult to read, especially episodes like where he can't get out of bed, because he senses something terrible is going to happen. There's urgency to those things and his parents and the doctor don't understand what's going on. So those scenes were playing in the back of my head when I was writing about Ami going through such low moments.
READING AND WRITING AS MOTIFS
I think, for Ami, it's kind of two-sided. One side is that in school, she very much used that as a way of coping, instead of doing certain other activities which involve being around a lot of people. She would simply go to the library and read books. Books let you imagine another life for yourself when everything else feels so restrictive. But Ami also sees writers as people who live and make sense of everything around them, it's almost like she is looking to find answers from them. She wants to know how the writers are doing it, so she can do it better. Even her writings about Thatha are her way of recording those memories, grappling with her own mind which is forgetting some of those memories but also revisiting the more painful ones. And it’s not as if she aims to publish something around that. So, she very much uses that as a way of coping but also understanding the world, which is why she sees the school syllabus also in a different way. For her, people like Keats and Wordsworth have found answers to things she still hasn’t.

THE NATURE OF CAREGIVING
You see, Ami’s parents and sister have a long term pattern of caregiving because they’ve already done it with Thatha. So, on one hand are the more practical things like making appointments and going to doctors, but it’s also a very emotional kind of acceptance on the other hand, where you just have to let go. Like in a way how they have come to terms with Thatha’s passing but Ami hasn't. If you see it from her parents’ perspective, it’s very scary for them, it’s like the baby bird falls out of the nest too early and you don’t know if she’s going to survive. Obviously it’s terrifying for the bird but imagine how scary it is for the mama bird. They want to do everything they can but they are so scared of Ami not making it. The question of what if she doesn't go back to college is not only the middle-class concern of going to college and getting a job, it is also what else will she do otherwise, how will she survive in this world which is conditioned on you doing something.