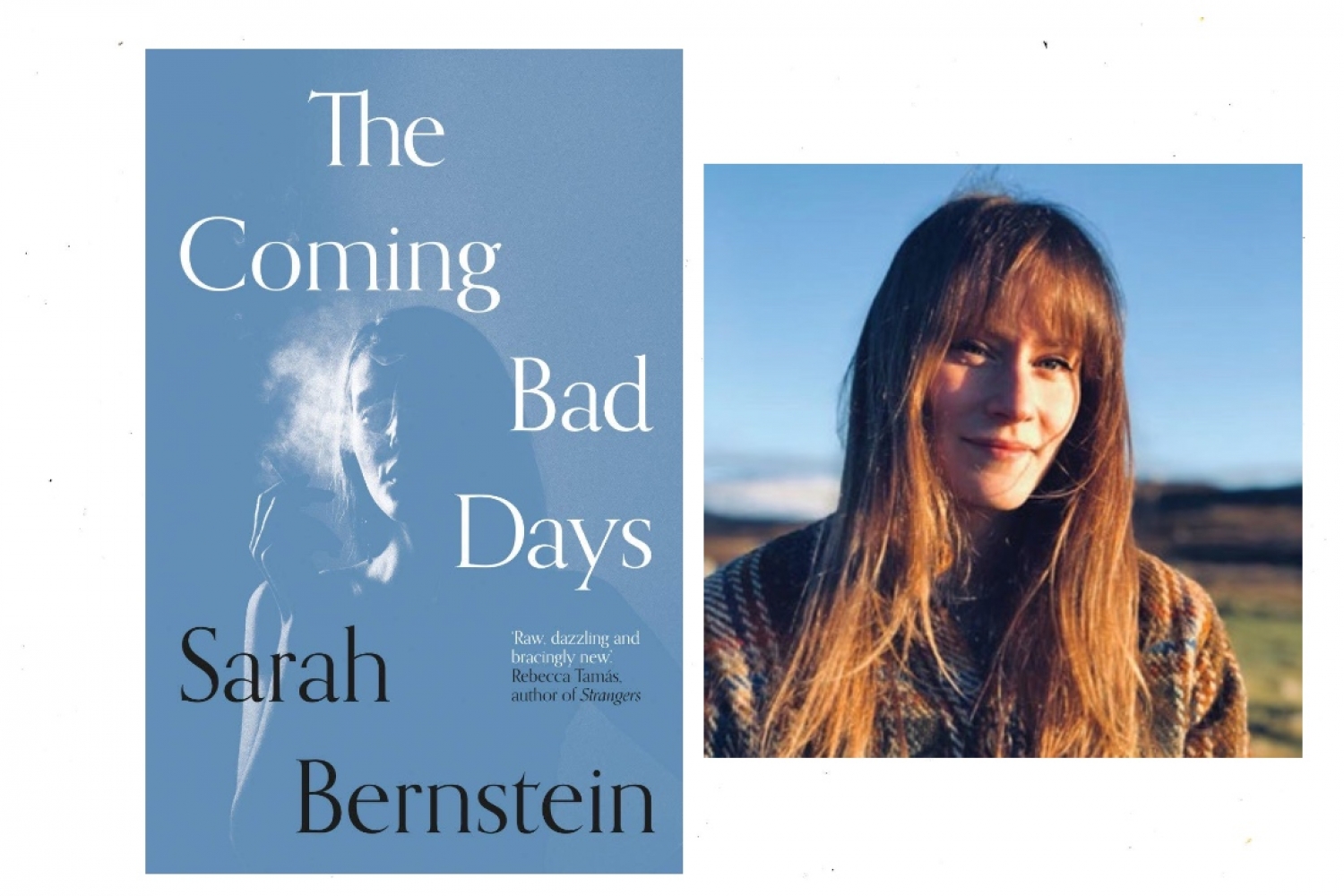 ‘Sometimes we will the darkness into being because the anticipation is a thing much more terrible, and I knew that we both had apprehended even in girlhood the bad days to come’. Somewhere near the middle of Sarah Bernstein’s ‘The Coming Bad Days’, these lines loom. I remember quietly hyperventilating as I read and then reread these lines. The truth is that as soon as I began reading Sarah’s book, I was consumed entirely by a heavy sense of existential dread, the kind I have thus far identified being engulfed by while reading Albert Camus’ ‘The Stranger’. I am certain there aren’t many things similar about the two books in question, or their protago- nists, however, reading Sarah’s prose felt more stifling, more suffocating. Perhaps the essential reason being that this antici- pation and existence of bad days constitute a universal experience, in varied degrees, in every girl and woman’s life.

A Daunt Books publication, Sarah’s debut book is a remarkable exercise in exploring the various facets of female existence — the violence, the attachment, the detachment, the performativity and everything in between. In our postmodern landscape of fragmented identities and overwhelmingly fractured realities, this book, quietly yet devastatingly, cap- tures the contrasting thesis and antithesis of the inevitability and futility of living. “I was thinking a lot about what it’s like to be in a state of psychic crisis when the world around you is already in crisis and the extent to which each feeds into the other. Our subjective experiences are, of course, shaped by the material conditions of our lives — economic, social, political. But then there’s also this question of perception: what the world looks like depends much on the person doing the observing. I wanted to think about language and how we use it, how it defines and creates the world around us,” elucidates Sarah, when I touch upon what led her to pen this novel.

The premise of the book, much like the entirety of the book, ricochets between contrasting oppositions. On the surface, it sits innocuously, however as you dive deeper, its complexity intensifies, word after word, with no relief in sight. We follow the narration by a nameless woman who leaves the man she has been living with and moves to a low stone cottage in a university town. She joins an academic department and begins a research project on the poet, Paul Celan. She is in self-imposed exile, hoping to find dignity in her loneliness. Like everywhere else, the abiding feeling in the city is one of paranoia. The weather is deteriorating, the ordinary lives of women are in peril and an unexplained curfew has been imposed. But then she meets Clara, a woman who appears to be light to her shadow; decisive, productive and assured. As their friendship grows in intimacy, Clara suggests another way of living — until an act of violence threatens to sever everything between them. Giving me an insight into her process of writing the book, Sarah shares, “It was basically a process of synthesis, bringing together all that I was reading and seeing, my anger at the cruelty and intransigence of the government in the place I was living, my personal humiliation at the hands of the absurd and inhumane business metrics of the university. I wanted to try to integrate all that.”

I find myself constantly questioning how a man would respond to this book. My conversation with Sarah reveals that she was writing this book in the midst of a long line of unsuccessful job interviews and one interviewer’s feedback was that she was ‘affectless’. “I became obsessed with this idea, particularly as it pertains to gender: it was clear that my not performing a certain kind of ‘affect’ was only a problem because I was a woman. I wanted to write a protagonist, who actively acts against the injunctions to feel a certain way, pursues a kind of affective detachment.” The word ‘catastrophe’ finds itself repeated a few times in the book and at some point, the phrase ‘a quiet catastrophe’ suddenly jumps from the pages. I found it almost definitively telling of the reality of female existence that Sarah tries to explore in the book. If I may go back to the note on which I began this review, the beauty of this novel lies in laying bare the absurdity of how normalised paranoia and the impending threat of violence prevails in the lives of almost all women today. For a woman, every breath feels heavy and calculated, just like every word in the book.

From a narratorial standpoint, the book quite often seemed like a play of contrasts. This detachment that Sarah has mentioned is particularly overwhelming in the book, however, attachment too finds itself silently penetrating between the lines. Her relationship with Clara both saves and destroys her. Clara’s name has been the only one our protagonist actually mentions in reference, alongside the writers and the poets and the painters, however everyone else is described with an air of anonymity. The protagonist is a compelling combination of contradictions herself, often both insider and outsider; free yet bound. At the same time, the elliptical nature of the narrative is steeped in the post modernist tradition, yet almost simultaneously edges away from it through the relative passage of time, sometimes almost too fast and sometimes painstakingly slow. There are pages packed with a slew of words and then pages with a single line. Every now and then, the writer mentions absence and presence together. It is in this ambiguous space between contrasts, between oppositions, that the book dazzles.

There are many other aspects of the book I found unforgettable. As a reader, I associate certain feelings and favourite thematic concepts with a book, but very rarely do I associate a colour. ‘The Coming Bad Days’ however, doused me in the colour blue. Whether it is through the ink, the pool the protagonist frequently swims in, the afternoon sky or what the writer suggests as the ‘blue and wide open smell of spring’, I found myself often visualising the book, black and white leaping off its pages with vivid splashes of blue. The writer also describes spring so uniquely and intriguingly, ‘Outside, things opened and were drenched. In the allotment gardens lettuces went to rot. Leaves unfolded on the trees in strange and monstrous shapes. The trunks swelled’. These evocative and abrupt elements lend the book the astounding originality one often looks for and uncovers in debut writing.

Now, Sarah has already begun working on something new, perhaps a second novel, “If I ever manage to find time to write,” she complains. A few years ago, she went to see a retrospective of Paula Rego’s work and was mesmerised with her description of some of the women in her paintings as ‘obedient and murderous at the same time’. “That is what is animating the writing at the moment,” she confesses.

This article was initially published in our Bookazine. To read more such articles grab your copy here.

Farah Bashir takes us through her coming of age against the backdrop of conflict-ridden Kashmir.

In conversation with the author about his recently released new book, A TIME OUTSIDE THIS TIME.