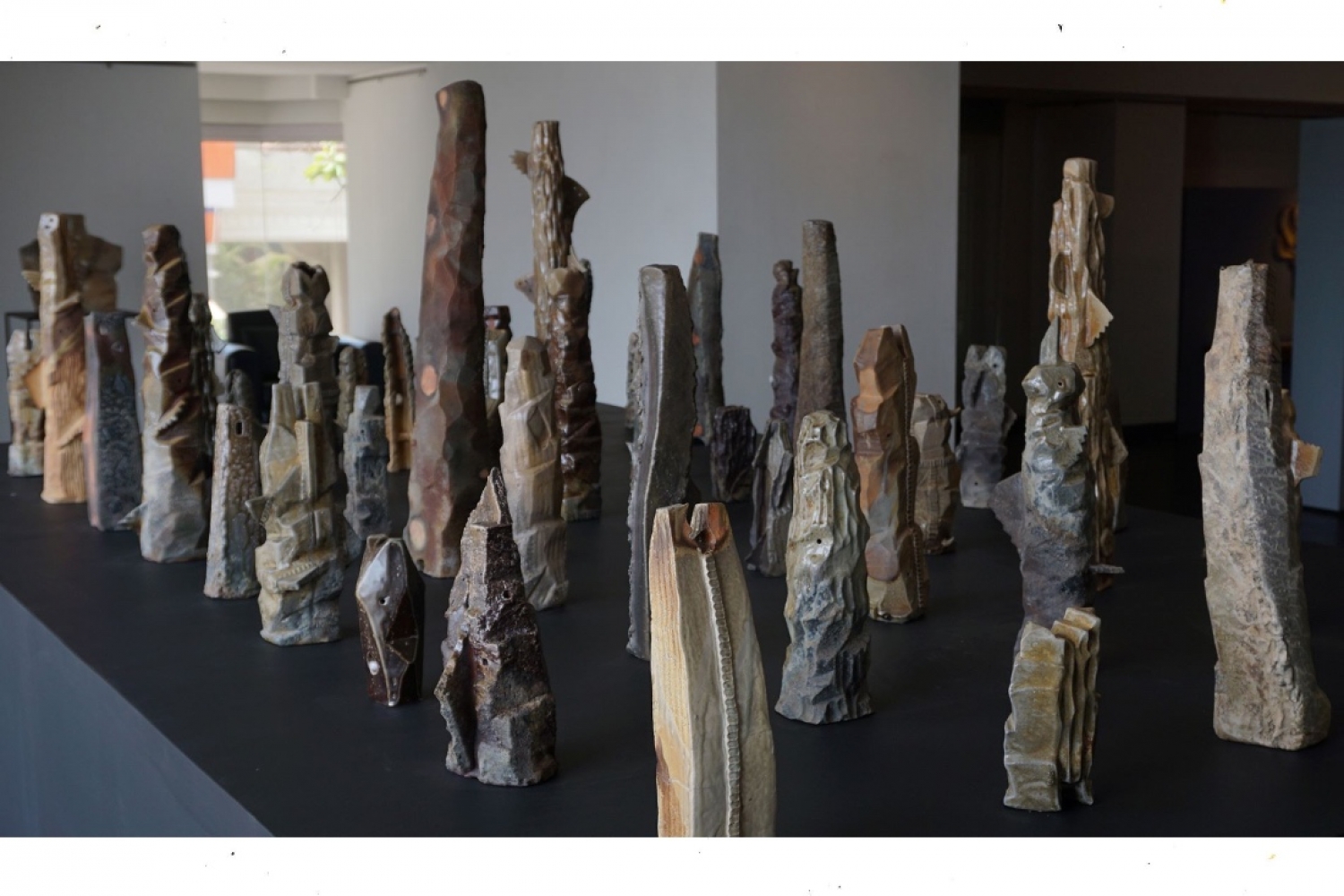 Antra Sinha seeks to penetrate the world we inhabit through her intense search for the geometrical structures of the universe in the shape of the hexagon and the Fibonacci sequence. Inspired by the Zen monks ink drawings of the square, circle and triangle of the universe, she started her creative journey by translating these into three dimensions. According to Antra, ‘I was completely enamoured by the tetrahedron because it is a minimal stable form and made me liken it to myself when I was going through a period of searching for stability in my personal life.’ In looking for ways to make the geometric form more organic, Sinha came upon the form that she calls the ‘tetrarc’. This has so inspired her that she has made it from minuscule to monumental in all its iterations in residencies nationally and internationally.

Another natural form that has inspired her is the snowflake that she investigated during her graduate study programme in the US. Using CAD software and the Computer Numerically Controlled milling programme that left faint lines of the drill bit on the model, these gestural mark trails were then translated into the slipcast mold and subsequent form. Working with these installations using shadow as an integral vehicle of expression added to the cool aestheticism of Sinha’s work in repeated geometries. She moves between a juxtaposition of the organic and the geometric in a beguiling paradox of nature and artifice. For most of her practice, Sinha has been engaged in developing these complex ceramic units that when combined become large architectonic installations.

In Ahmedabad, Khanjan Dalal has used his art to explore and explain the state of humanity and is engaged in an ongoing examination of human behaviour and society. He has used his practice to translate the inner world of the subjective into the objective, thereby determining what it is to be masculine in a post-modern age. For many practitioners, the move towards installation and assemblage was an extension of their object-based practice. The poetry of the single object spilled over to fill an entire space. Dalal explores the ideology of maleness and violence in his arresting installation works ‘47 Ronin’. Based on a Japanese folk tale, also known as Treasury of Loyal Retainers in its Kabuki performance form, it tells a gripping tale of revenge and blood lust. What is communicated in the installation of the forty-seven totems is a sense of darkness besides the communality of a commemorative ceremony. Dalal responds to the toxic violence and masculinity that is embedded in mankind’s history of wars by recognising the physicality and deeper implications of the theme by weaving his sources from Ashoka to Japanese samurai together to create a work that is marked by emotion, body, place and memory. This is also seen in the Expressionist work titled ‘Armoured Torso’ where the brutalised modelled torso stands as a caricature, void of emotion except for the interactive bell that the viewer can engage with as an epic manifestation of the banality of existence.

Language, both its celebration and its uncommunicativeness, is the second thread that runs through Khanjan Dalal’s works. In his ‘Speech Bubbles’ assemblages, he uses the wad markings of the kiln flames in order to depict the emptiness of language, what is left of the emotion, the gaps without meaning. He says, ‘I see language as a tool and as a weapon. It is one of the most effective tools we as a species have devised and it is responsible for our successes as well as our failures.’

The significance of the marks and flashes of the wood firing, be it anagama or bourry box style that comes out of the ash marks a common primary element in both the artists style and technique. Inheritors of the raw naturalism tradition, albeit with different emphases, the surface embellishments of both engage directly with the fire in the earth’s core: imagery evolved from the volcano and the eroded rock face: a sort of geological existentialism that both artists express through their vitrified earth. The approach undoubtedly shows the influence of the Korean Japanese tradition through the interstices of contemporary practices. Also, both Sinha and Dalal engage in devising their own clay bodies peculiar to the artistic concepts they choose to express. Sinha’s fascination with the luminosity of fallen snow in Utah encouraged her to experiment with a highly vitrified clay body that reflects light while Dalal responded to his arid environment in Ahmedabad with the creation of a strong, burnt orange, toasty, textured clay more suited to his thematic portfolio.

Both artists have demonstrated the ability of ceramics to move into other spheres of practice without reducing the intensity of the ‘ceramic continuum’. Antra Sinha speaks eloquently of building a ceramic network bridge between the world’s ceramic practitioners and the exploration and connections between creative peoples across the world. Khanjan Dalal sees metamorphosis as the ageing, growth or maturation from a space where the artist is the tree growing from within and together with others to create a raw energy that fuels a rich fusion of life, nature and imagination.

The illustrator and graphic designer gives us some insight into her practice.

In conversation with the mixed-media artist.