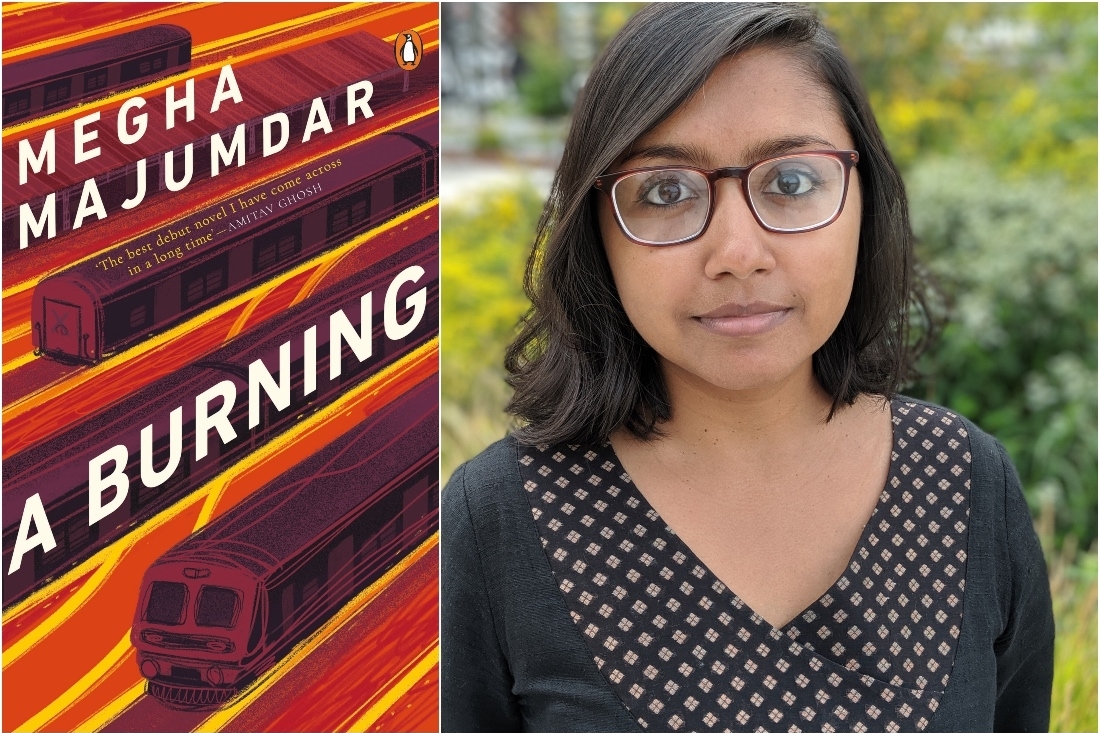 The twenty first century has brought with it a plethora of technological advances and the cyber space has now become a living and breathing entity, one that has pervaded human existence all consumingly. Presently, human life cannot be imagined without the presence of social media, and its constant effect on our lives in myriad ways. Naturally, today’s youth has managed to push its potential, from using it to create new and profitable careers, to launching some of the great- est social awareness campaigns. With this backdrop of digital urbanisation in India, Megha Majumdar’s debut novel, A Burning, shrewdly captures the hopefulness and the horrors of living in such an age.

Not short of an epic novel, A Burning revolves around three characters. Jivan, a Muslim girl from the slums, determinedtomoveupinlifeandwhois accused of executing a terrorist attack on a train because of a careless comment on Facebook. PT Sir, an opportunistic gym teacher who hitches his aspirations to a right-wing political party, and finds that his own ascent becomes linked to Jivan’s fall. Lovely, an irresistible out- cast who has the alibi that can set Jivan free but costs her everything she holds dear. A simple social media post propels into motion a riveting tale, replete with complex themes of class, fate, corruption, justice, and what it feels like to face profound obstacles and yet nurture big dreams in a country spinning towards extremism.

Megha, who has had a long lasting relationship with literature, currently working as an editor at Catapult, is an enthralling new literary voice. Her book is extraordinary and urgent. We spoke to her about her relationship with the written word and her new book, which has proven to be one of the most highly acclaimed debuts of the year.

How were you led towards the world of literature and how would you define your relationship with writing as?
I’ve been a reader since I was a child—I read everything from folk tales of Bengal to Sherlock Holmes. Reading brought me to writing. It’s funny because my relationship with writing has differ- ent aspects to it. I work as an editor, so I acquire and help publish others’ books, which brings me great joy. In that work, I learn to think carefully about logic and movement and clarity on the page. And I hope that I bring that thoughtfulness to my own writing. It helps me invite the reader into the story, I think!

Which authors or books were your early formative influences?
I’m a big fan of Jhumpa Lahiri’s work, Arundhati Roy’s work. I am so moved every time by the pathos of Tagore’s writing. More recently, I’ve loved Daniyal Mueenuddin’s In Other Rooms Other Wonder; Devi Laskar’s The Atlas of Reds and Blues; and in nonfiction Anjan Sundaram’s Bad News; Snigdha Poonam’s Dreamers.

Could you tell us a little bit about your writing process and the kind of research you did while writing this book?
Much of the book was about engaging the textures and humour and intelligence that I know so well from growing up in India. So a lot of it felt very personal, very intimate. I did some reading and watched some documentary videos for some parts. I studied social anthropology, and love eth- nographies, so I turned to ethnographic work done by Gayatri Reddy and Vaibhav Saria.

There are three main characters around whom the book revolves, all of them very different from each other yet interconnected. How did you find or create these characters?
I wanted to write about a person who works very hard but is defeated by the system, a person who is marginalised in complex ways but still dreams big and aims high, and a person who, in a society with huge power differentials, is tempted by a taste of a little power. I think once I knew what moved me and what I wanted to explore, the characters came quite quickly.

There are so many heavy thematic concerns at play in this book, from politics to justice, yet the book explores them all in the most enthralling yet succinct way possible. How challenging was it to explore such themes and what for you was the main driving force?
A challenge that I set for myself was I wanted to write about all these themes, but do so in a way where a reader would want to read this book rather than watch something on Netflix! I learned a lot from how TV shows move, how they keep you coming back from episode to episode. I wanted to try and accomplish something like that in my work.

Could you give us a blurb on the book in your own words?
A Burning is about three people who seek to rise—to the middle class, to fame in the movies, and to political power—in contemporary India, as society makes a turn toward right wing nationalism around them.

What do you wish the readers take away from this book?
Hmm, I think I’ll be interested to hear what readers do take away from it! All I can hope for is that readers come to it and engage with it and bring their own lives and dreams and experiences to it.

Lastly, what’s next?
A new book! It’s too early to talk about it, but I appreciate your asking.