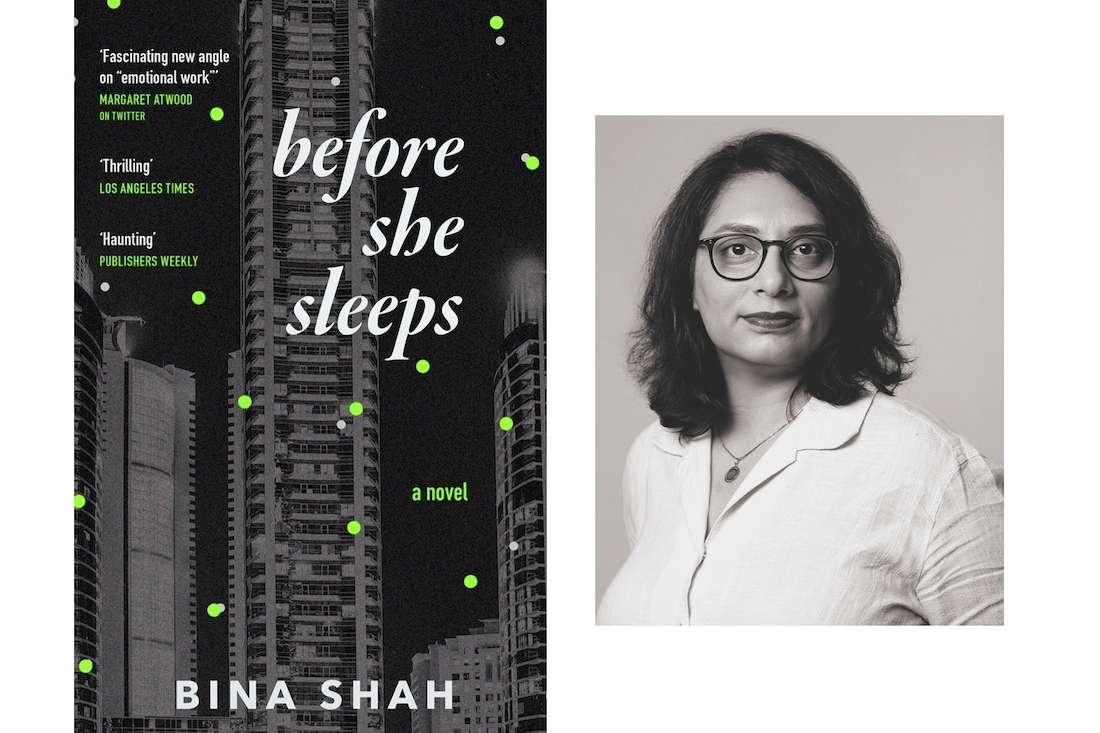 In her new novel, Before She Sleeps, highly acclaimed Pakistani author Bina Shah, uses the scenario of a dystopian, nuclear war wrecked future, to explore deeply relevant contemporary issues. In the fictional Green City, the capital of South West Asia, gender selection, war and a virus outbreak have brought the ratio of men to women to alarmingly low levels. The government uses terror and technological surveillance to control its people, and women must take multiple husbands to have children as quickly as possible. Bina Shah reimagines our contemporary reality in this modern day parable, deeply assessing the patriarchal practices that govern female oppression today and recasting them to create a terrifying world of post-religious authoritarianism. She situates quite admirably, the dangerous ideological structures that have been propagating subjugation of women for a long time, both in the south east asian context and the world, and what could potentially happen in the future if we allow these structures to retain themselves. We connected with her to know more about her literature and the book. Excerpts follow:

When and how did the writer in you emerge?
I was in sixth grade when I was first taught creative writing. We were told to be very descriptive. I remember not getting very high marks as I didn't use a lot of adjectives in my writing, while other students wrote sentences like ‘The beautiful, brown-haired, happy, sweet girl lived in a big, beautiful, spacious, luxurious house.’ Despite that early setback, I grew to love writing in high school and realised that I was better at it than that first teacher had led me to believe. It became a career choice in my mid-twenties, when I started work as an IT journalist for a computer magazine in Karachi.

After all these years, how would you describe your relationship with writing as?
Passionate still, as I am learning every day how to become a better writer. There's always a new skill to master, a new technique to try, and ideas all the time. Like the ocean, inspiration never stops.

Which authors or books were your early formative influences?
I was always drawn to books about orphans, so Jane Eyre and Oliver Twist when I was a child. W. Somerset Maugham's Of Human Bondage is a book that really stood out for me when I was 18. The hero, Philip Carey, was also an orphan, but it's his coming of age and his dramatic early adulthood that entranced me. I didn't know until then that it was important to reflect on life and try to develop one's own philosophy about it.

What propelled you to write Before She Sleeps?
The first and foremost question in my mind: what would men do without women? From there, everything flowed. A society that has to adapt to a shortage of women, how do they do that? Can women and men have intimate relationships that don't involve physical intimacy, but everything else? What does a highly advanced society in the Middle East look like? What happens if there's nuclear war between India and Pakistan? I wrote to answer those questions for myself and made a story in the process.

What did your writing process look like?
The book started off as a short story: a single chapter that describes a dystopian society in which plague has killed most women and those who have survived either submit to an authoritarian regime which controls their fertility, or risk punishment. A few of them go into hiding, and only come out at night to serve as companions to the elite men of this city. It felt unfinished, a placeholder for a future novel, which came years after the writing of the short story.

Even though the book is dystopian and set in the future, the thematic concerns are very deeply rooted in the the present day socio-political concerns regarding women. How important was it for you to use a dystopian future to explore very current and pressing issues?
I have written so much about women’s rights and the situations that women face, in the vein of journalism. With this book I wanted to address the same issues but as an art form, you know, artistically rather than reportage. Dystopia was the scenario I wanted to explore, after having written a historical novel with contemporary elements (A Season For Martyrs, Speaking Tiger). Everything I write, though, is grounded in who I am and where I’ve been.

What is the biggest challenge you faced while writing this book?
My friend, the social activist Sabeen Mahmud, was shot and killed in 2015, as I was working on the book. It was a devastating event that impacted our entire community of artists, our city. Dealing with the grief and horror of her assassination was extremely difficult. I channeled those emotions into the book. Many people think I had named my main character after her, but I wrote the original short story in 2006, so that was pure coincidence.

What do you wish your readers take away from this book?
I hope that readers enjoy the story more than anything, find resonance with the characters, and consider what the future may hold for women if things continue in the vein they are going today. Already in China and India there are regions where the woman to man ratio is skewed — men can’t find women to marry or have children with — and in some remote regions, bride-sharing exists.

How have you been coping with the pandemic personally and what will be the new normal for you post it?
Like everyone else, I’ve been trying to cope with the circumstances and wait it out. The new normal will include a lot more hand-washing than I’ve ever done in my life.

Lastly, what are you working on next?
An unnamed sequel to Before She Sleeps.