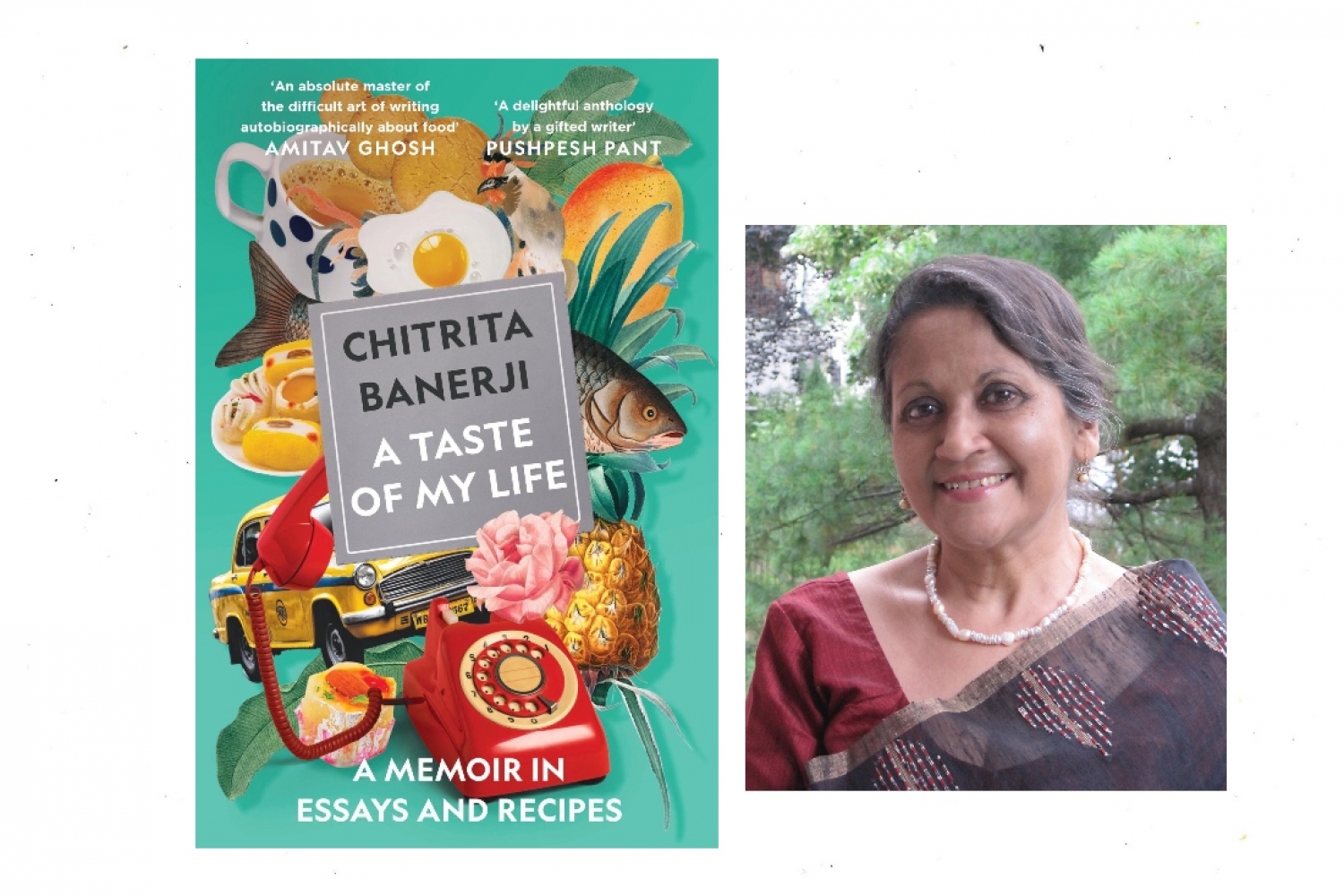 Award-winning culinary historian Chitrita Banerji’s food memoir, A Taste of My Life: A Memoir in Essays and Recipes, is a delectable feast of prose. As you delve into the three-course meal Chitrita offers through this book, you feel her sitting down on the dinner table with you, indulging you with the flavour of her recipes and insightful life stories. Even though, as she tells us below, the essays in the book were written during different points in time over the course of her life, they all come together cohesively in this book, lending themselves to the creation of a beautiful piece of autobiographical writing, seeped in food memory.

We’re in conversation with her below about the book and all things food:

When did you realise the power of food in your life?
Food was always an important element in the life of our large extended family. My mother was a legendary cook and her contributions at family get-togethers were eagerly anticipated by all. Although I did not have any interest in learning to cook during my student days, I could not help being aware of the way the presence or absence of food was reflected in the day-to-day interactions and emotions of people in the family. There was plenty of drama around food, reflecting the very human responses of gratification, appreciation of culinary subtleties, disappointment, envy, competition, and favouritism. I may not have understood it all as a child, but there was always an awareness in me that food, at least, in our family, was not simply a matter of satisfying hunger and filling one’s stomach.

What led you towards documenting culinary histories?
I am an accidental culinary historian. My first food book, Life and Food in Bengal, (now available as Bengali Cooking: Seasons and Festivals) was written after an editor at the publishing house of Weidenfeld and Nicolson approached me to write it as part of their Life and Food Series. That book came out in 1991. Researching the book and talking to my parents at length about their experiences of food through their lives was an astonishing journey. Even after that book was written, I knew I was going to continue my travels in the realm of food for a long time.

After all these years, how would you describe your relationship with food today?
I think it is literally the stuff of my life, a marker of identity, a connector to the world I live in and the relationships that sustain me.

What inspired A Taste of My Life: A Memoir in Essays and Recipes?
I had written the pieces at different points of my life. So I can’t say that I was motivated by a single, particular inspiration.

Could you give us some insight into your writing process?
As I said earlier, it is a collection of essays written at different times. So the triggers behind the pieces were discrete memories and incidents. The process of writing was fueled by the desire to not only recover a memory or a story, but to acquire a deeper understanding of what happened and how it shaped me. I guess you can say the writing was an ongoing dialogue with my inner self.

How did you curate the essays and recipes for this memoir?
When I considered the idea of writing a memoir, I realized, to my surprise, that these pieces, which I had written at different times, added up to a representation of my life, even though they did not follow a linear chronology. I saw that they included memories and experiences starting from childhood to adulthood to present times. So I decided this collective recall spread across different points of time was the memoir I wanted to create.

How challenging was it to put together this book?
For me, writing is always a challenge. I am not prolific, nor do I write swiftly. In that sense, this book was about as challenging as my other books.

What do you hope the readers take away from this book?
I hope the book will encourage them to reflect on their own experiences with food and how that relates to other aspects of their lives.

What is the most significant cooking advice you have received?
To have focus and patience, even when preparing the most mundane of dishes and to believe that imagination is the most crucial element in unifying taste, flavor, and texture.

What are some cookbooks you love and recommend?
This may sound strange, but I hardly ever use cookbooks. Most of what I have learned to cook comes from my mother and some things I have learned from friends in the course of my stay in different places. On rare occasions, I may find a recipe in a newspaper’s Cooking section that intrigues me, and I will copy it in my files for future use — which, sad to say, doesn’t happen as often as it should. The image of the cook laboring away with an open cookbook propped up on a stand on the kitchen counter does not apply to me.  However, I do own a few Bengali cookbooks I cherish, among them Bangla Ranna/The Bengal Cookbook by Minakshie DasGupta. A book that took me by surprise by its delicious revelations was Burma — Rivers of Flavor by Naomi Duguid.

Is there a recipe you keep going back to?
Not really. I enjoy variety and also playing with ingredients in ways that were not part of an original recipe. As long as the essential nature of a dish is preserved, I believe a cook should have the kind of freedom that adherence to a recipe cannot confer.

When cooking, what’s an indispensable ingredient for you?
If I have to choose just one ingredient without which I can’t cook, I guess that would be the Bengali spice mix, Panchphoron.

How have you been coping with the pandemic personally, and as a writer?
Like everybody else, I have had to contend with the devils of isolation, boredom, and anxiety. However, I am more used to solitude than some, and that has helped me deal with a situation where social encounters have been minimal. As a writer, however, I have been surprised at how difficult it is to maintain focus and concentration even when the supposed distractions of social life are absent. Interactions with others may take up one’s time, but they also provide invaluable stimulation that helps, however indirectly, in the writing process.

Lastly, what are you working on next?
It is not a book that has fully taken shape, so I don’t wish to say much except that it has an oblique connection to the role of food in our lives.

The author gives us some insight into the creation of her debut novel, Best Intentions.

Book Clubs’ Picks of the Month

A curated list of books that are this month’s picks of various book clubs, and should be on your must read list as well.

In conversation with the translator about her relationship with the art, her translation of books by author S. Hareesh, and more.

In conversation with the author regarding the release of his short story collection, Adam.