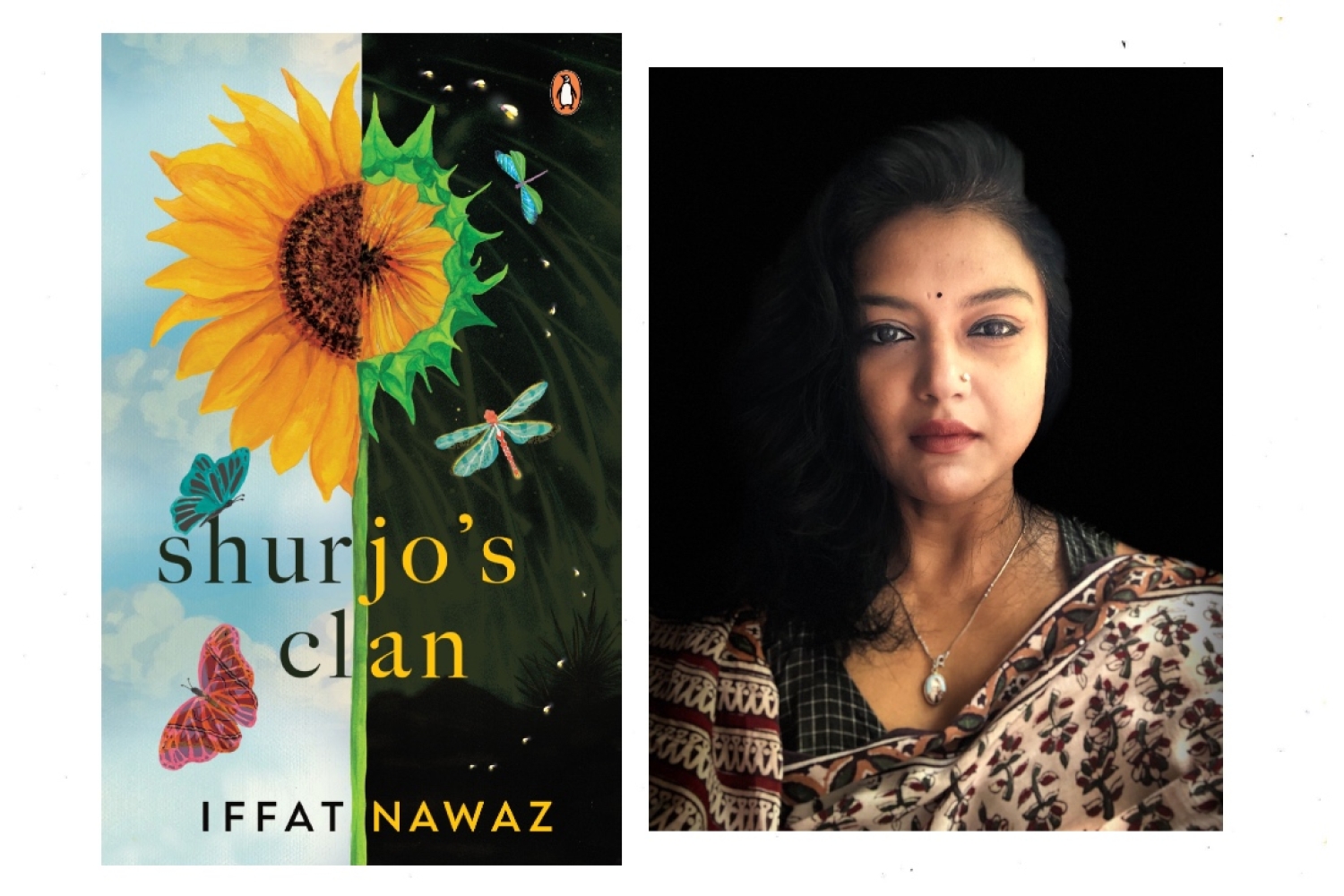 Iffat Nawaz was born in Old Town Dhaka, Bangladesh and grew up in a neighbourhood where "walls and alleys carried layers of stories from the bygone eras.” She further reminisces, “Growing up there meant a constant sensory overload, and I, along with the other children, loved our old-town life – afterschool naps next to grandmas, tiptoeing out of bed in the depths of afternoons to find a hidden corner to read the latest Tintin or Sukumar and Satyajit Ray’s children’s stories and then rushing to the rooftop before sunset to fly kites. In my early teens this lifestyle majorly shifted as we moved to the USA where the remainder of my ‘growing-up' took place.”

Her riveting debut novel, Shurjo’s Clan, is a coming-of-age story of a girl growing up in a newly formed country, Bangladesh. "My family’s and more collectively the sub-continent’s shared history, the half-told, half-hidden stories of grief that we still carry from our ancestors inspired me to write Shurjo’s Clan. I believe those of us who are born long after the 1947 partition/migration and the wars which followed, inherited memories of such conflicts from our forefathers. The experiences they did not heal from consciously got passed down to us in the form of energies — often unspoken but very vivid and real,” she reveals of her book’s inception.

Below, Iffat Nawaz lends us further insight into her journey and her debut book:

The Author
My father led me to the writing world. He was a photographer and taught me the essence of visual storytelling. He died at forty in an airplane in front of me, my mother and my brother and that tragedy had pierced deep into my soul and heart. For the next years, one of the only ways I could express my feelings was through writing short pieces. Those pieces started getting published in our school magazines. I also wrote as a correspondent for the local newspaper. All these encouraged me to keep at it, and so I did.

The Book
At the core of Shurjo’s Clan is the search for light in darkness, an attempt to turn our broken pasts towards a more whole future, to stir-up the stagnant parts in our inner and outer worlds for healing, and an inspiration to move forward from our inherited conditioning – while honouring it and putting it to use for an expansive and more compassionate tomorrow.

I believe our lands are still unhealed from the trauma of broken limbs, and so are our people. And it goes beyond the subcontinent, any nation which is going through their upheavals, refugee crisis, migration, displacement, identity issues, Shurjo’s Clan aspires to touch those wounds and wishes they become painless, beautiful scars.

The Creation
Much like the protagonist of Shurjo’s Clan, – Shurjomukhi aka, Shurjo, I was also born into a family of freedom fighters and martyrs. As a child, I did not understand the substance so well but as I matured and wanted to work on a longer piece as a writer – the context of Shurjo’s Clan became a reoccurring theme in whatever I wanted to write. I tried writing about other subjects for a while until I realised these passed down tales are what needed to be written out first, for my ancestors. I strongly felt that the ones who came before me, the ones I did not ever meet in person formed the premise of this book and I crafted it from the feelings which arose while connecting with them.

The first draft was heavy and dark, and around the time when I was finishing it, I had moved to Pondicherry. And soon after moving to Pondicherry, I became engrossed in the writings and work of Sri Aurobindo and the Mother. It was through their teachings and influence that I realised I needed to simplify the novel and not write just another war or partition story, but one that turns it towards the light. I took a break from writing for about a year and half and then wrote a completely new draft – and that is Shurjo’s Clan.

Shurjo’s Clan is written in magic realism — for me that was the only way a complex and dark story can be made lighter and hopeful. In any case, for me the world feels like magic realism much of the time.  But the base of being attracted to such a style started while reading Satyajit Ray who wrote about paranormal subjects for children, and then got strengthened by reading authors like Gabriel Garcia Marquez, Kurt Vonnegut and Arundhati Roy.

The Challenges
It was mostly a conflict with self that I had to overcome. A conflict of choices. I left my international development and humanitarian job and chose a simpler life where I had to find the discipline to write. Through Shurjo’s Clan, that discipline got built, but I am just at the beginning of this journey, and I have a lot to learn about becoming a writer. I was also not sure if my novel would be picked up by a well-known publisher. The insecurity and uncertainty were something I had to brush aside and keep faith.

The Hope
I hope the readers will be inspired to rewrite their own family histories, to not just repeat what we have been told about our nations and their pasts but get rid of the outdated biases and create new narratives, both personally and communally for the present and future.