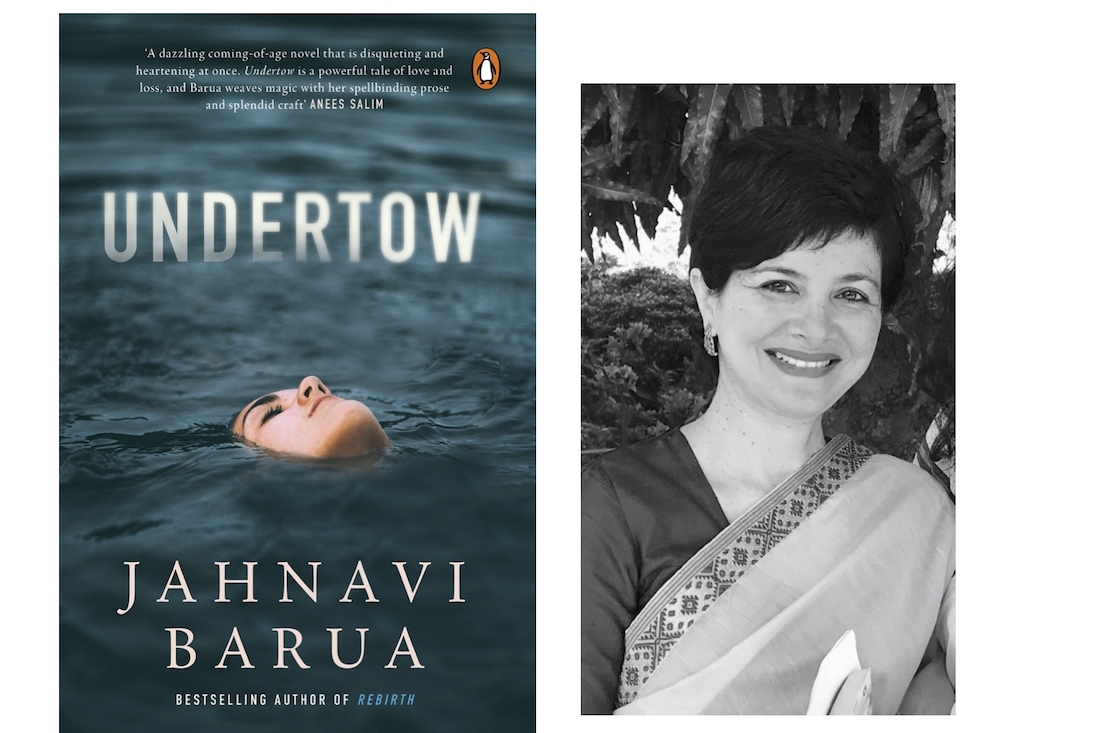 Loya is twenty-five, solitary, sincere, with restless stirrings in her heart. In an uncharacteristic move, she sets off on an unexpected journey, away from her mother and her home in Bengaluru, to distant, misty Assam. While she looks for her beloved Asian elephant, Elephas maximus, she also seeks someone else — her grandfather, Torun Ram Goswami, someone she has never met before. She then arrives at the Yellow House on the banks of the Brahmaputra, where Torun lives, not knowing that her life is about to change.

A delicate, poignant portrait of family and all that it contains, Jahnavi Barua’s Undertow is an exploration of home and the outside world, the insider and the outsider, and the ever-evolving nature of love itself. Having appeared recently on the longlist of the JCB Prize for Literature this year, Undertow is an intriguing book about precarious bonds that tie people together. In conversation with the author below.

How were you led towards literature and the world of writing?
Reading is where my relationship with literature began. I was a voracious reader when I was young. My mother taught English Literature — there were always books and book conversations around the house and that naturally influenced my reading. I began writing much later in life, when I took a break from medicine to look after my infant son who was ailing. During this time at home, I read extensively and I found myself reading a lot of Alice Munro, someone I had read before but not as widely and deeply as I was doing now. I cannot explain it but, after reading her, I felt the need to sit down and write. I wrote my first short stories in that period, in the wake of reading her brilliant short fiction.

How has your craft evolved over the years?
Writing has now become an inalienable part of my life — it is seamlessly part of my daily rhythm and something I cannot do without. Every writer’s writing changes with time and I suppose mine has too, although I cannot always see it. It is other people who point it out to me. What I can say is that, for me writing has become easier —- as any action becomes when practised often — and I am more in control of my craft than I was when I was starting out.

Which authors or books were your early formative influences?
As I mentioned earlier, Alice Munro was a huge influence, as were other short story writers like Anton Chekov, J.D. Salinger, Raymond Carver, Richard Ford, Eudora Welty, Ismat Chugtai and Ambai among others. I read a lot of the Russian authors growing up and the richness of their writing stayed with me. Later, I read a few Japanese writers and the subtlety of their writing left an indelible impression. Yasunari Kawabata is a favourite. Many, many Indian writers, too many to enumerate but Salman Rushdie, Rohinton Mistry, Shashi Despande, Anita Desai have to be mentioned.

How was your book Undertow conceived?
Undertow deals with the themes of home, homecoming, family and loneliness, all themes that have been of particular interest to me. My interest in these was the reason for writing Undertow. Through Loya — the young protagonist in the book — and her searchings, I explore all of the above themes.

Could you take us through your creative process behind writing the book?
Writing Undertow was a long journey, almost nine years long. It took me time and a lot of rewriting to balance the two voices in the book — Loya’s and her grandfather, Torun’s. At times, I felt I was favouring one over the other and I had to stop and correct myself as the effort in this story was to present two sides of a conflict to the reader, as fairly as possible.

Many themes are explored in the book, especially those regarding filial relationships and home. What for you was the main propelling force while writing and what is at the core of this book?
The complex relationships that exist within families, the even more complex nature of love and all that comes with it — loneliness, joy, despair — and the search for love and acceptance. In other words, the search for home is at the core of this book, wherever that home may be: a place, a house or a person.

What were some of the challenges you faced while writing Undertow?
I had to face a personal challenge of long periods of ill-health during the writing of Undertow. Also, as I have mentioned earlier, I had to balance the two strong voices in the book and that took some hard work.

What do you hope the readers take away from this story?
This is a story about the redemptive power of love and it also is a cautionary tale of what happens when conflict is not resolved in time. I hope readers will take that away from reading Undertow.

How have you been coping with the pandemic and what will be the new normal for you post it?
I have been coping as best I can, as all of us have been doing. We are spending a lot of time together as a family, one of the best consequences of this pandemic.

Lastly, what are you working on next?
I haven’t begun work on anything yet.