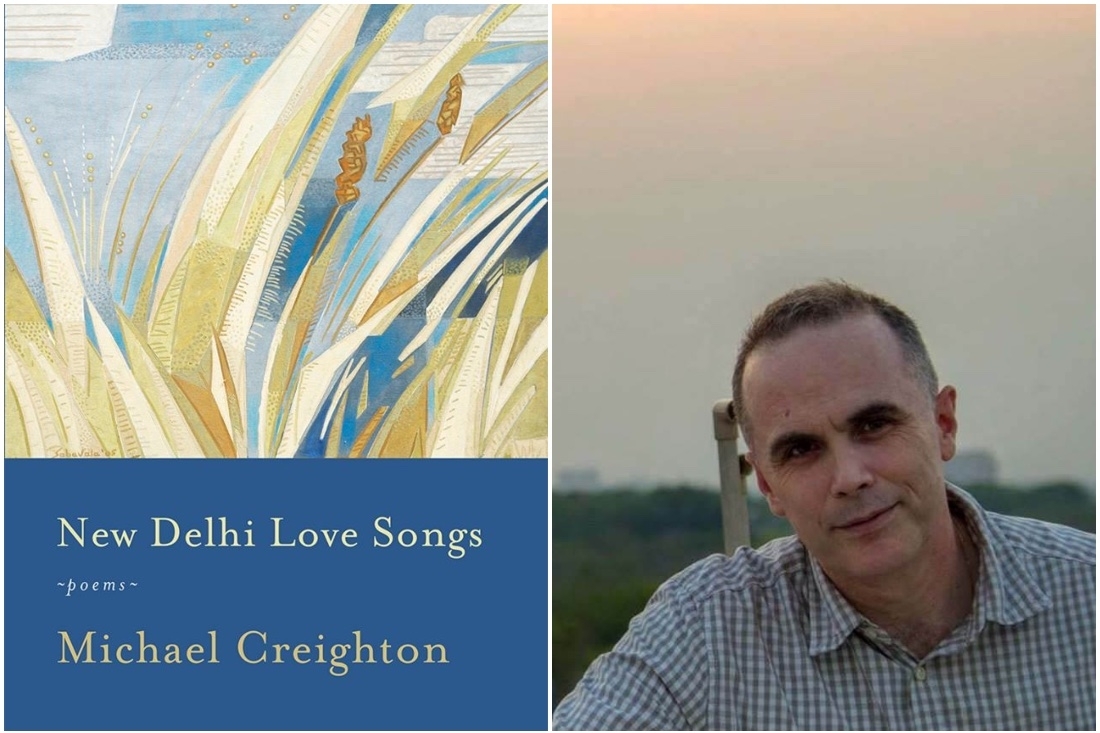 Delhi based poet Michael Creighton has been living in the city for a decade and a half. Drawing inspiration from sights, sounds and smells of the city to find beauty in its chaos, Michael released his book of poetry, New Delhi Love Songs in 2017. His poetry conjures up images of a love found in simplicity. As a middle school teacher, he also recognises the need for free and accessible spaces. Hence, he got involved in The Community Library Project, which seeks to set up libraries across the city, in partnership with NGOs like Nayi Disha. These libraries offer an inclusive space for people to come together and share their ideas and opinions. We are in conversation with him to know more about him and his initiative.

Which writers or poets were your early formative influences?
That’s a tricky question because I think it’s difficult to draw a direct line between what writers grow up reading and what we write later. But for most of us, what we read in our youth — or hear through oral traditions of storytelling and poetry — does have a lifelong influence on our language, writing and thinking. These early experiences with literature are where we learn how stories work, how to think of complex ideas, how to feel the texture and weight of words.

I read widely growing up; some years it was science fiction, other years, fantasy or westerns. It depended a lot on what I found in the local public library, or what my uncle brought and left behind when he came to visit on holidays, usually Louis L'amour or Edgar Rice Bouroughs. In terms of the ideas that had a lasting impact on me, Ursula Le Guin and John Brunner come to mind. Both made me think in different ways about what is wrong and good in the world. But the main impact that reading had on my writing was probably in the way it developed my sense of language and my ability to think and engage with the world in new ways.

In terms of poetry, I could cite the poems I read in high school or university, but I think that the poems I heard very early in life — nursery rhymes and poems by Shel Silverstein and others — were just as influential. Yes, when I decided to figure out poetry as an adult, I studied metre and learned how to scan lines. But that work only made sense because I had developed an ear for music in language by hearing poems at a young age. And now, though I never scan lines and I rarely rhyme, I almost always listen for the music in the poems I read and write.

What is it about Delhi that sounds like poetry to you?
I’m really a modernist at heart, so images lie at the heart of most of my poems. Of course I know that’s old school, and I’m always on the lookout for a good surreal dream or a scene that can conjure something like magic when viewed slightly askance. Still, much of what I write starts with a straightforward picture, sound, smell, taste or texture. Every place in the world is full of those things, but I don’t think there are many places that are as rich as Delhi when it comes to sensory images. Just open your window, or step out on the street and you’ll see what I mean.

Tell us about the community library movement and its significance today?
Wow, I could write a long essay about that; in fact I’ve written several. Here, I’ll just say that the world would be a better place if more people thought more creatively and critically. Good, free community libraries are one of the best ways to make that possible. Every person is a thinker, but free libraries give people access to books and a community to think with, and the thinking we do when we read is very powerful. When millions of people from all walks of life begin to read, talk and think about literature more deeply, many things will change. For one thing, some of those millions will become poets and writers, and they will change literature in ways that we can’t even imagine. I’m looking forward to that.

The Community Library Project (TCLP) runs four excellent, free libraries in the NCR region, and through The Community Library Network (TCLN), we collaborate with dozens more libraries all over the country. TCLP has proven that good libraries that welcome all people work; if you build them, readers will come. Right now, it’s a small movement, but it’s powerful in a small way, and growing.

What are some challenges you've faced while trying to open free access libraries around the city?
The challenges are really too many to list here — from funding cuts to the pandemic to how to keep books dry during the monsoon! But from the start, TCLP has believed in community involvement, and our member leaders are a large part of what makes these libraries possible; they are involved in every aspect of the work, from issuing books to developing policy. We’ve always had a core of very committed and hard working volunteers, and our librarians are doing extraordinary work, from welcoming members every day to doing research on how to best help struggling readers read better.

What are you writing or working on currently?
Mostly, I’m trying to figure out how to teach young people to read and think more effectively. That’s what I do in my day job and in my library work, and it’s the most important work I do. As a poet, I’m slowly plugging away at several sequences of poems — some for children, some for adults. I joke that I’m working on three books at the same time, and none of them will be ready until 2025 at the earliest!