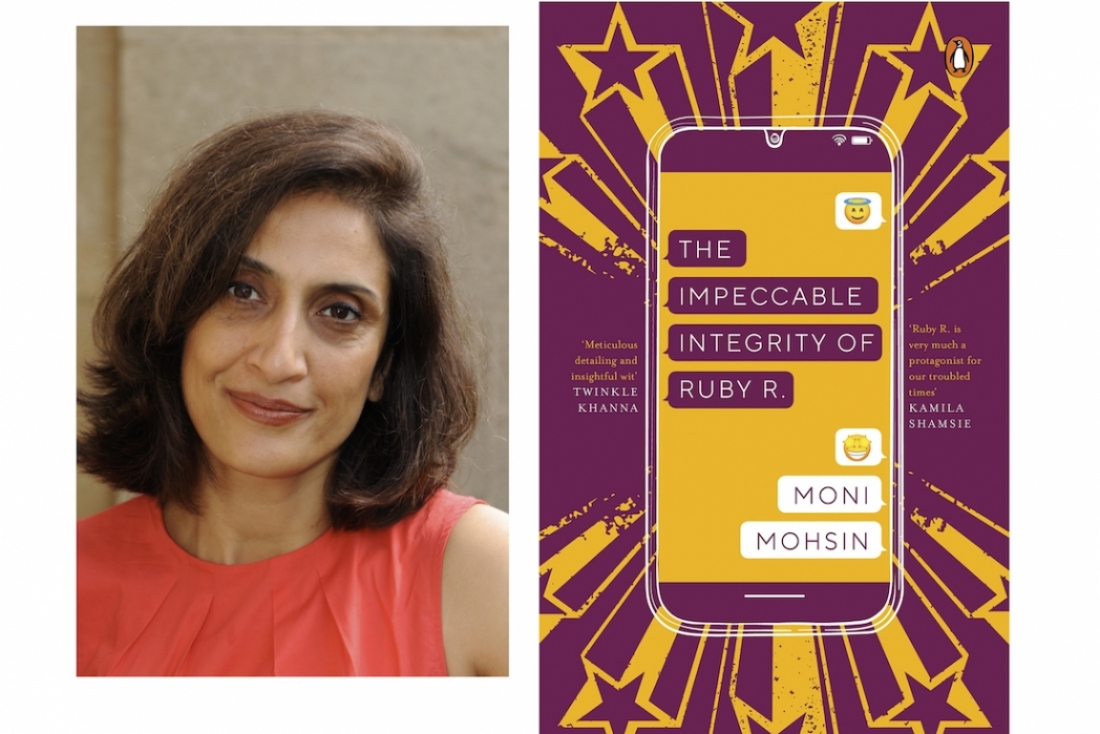 In a time like ours, when socio-cultural and political issues are chaotically propagated through social media, perhaps a satire addressing the same by Moni Mohsin is of the essence. Her new novel, The Impeccable Integrity of Ruby R., cleverly satirises the use of social media as political propaganda. As we embark on this journey with the titular character Ruby, who finds herself struggling with making the difficult choices that her job demands as a social media manager for a charismatic politician, the world of politics and social media prove to be a moral minefield.

With quicksilver dialogue, shrewd political insight and a thoughtful take on the MeToo debate, this sparkling novel reveals the author on top satirical form. In conversation with Moni Mohsin about her craft, new novel, and more.

What is your first memory of writing?
I wish I could tell you that I was writing fiction from the age of six and that stories poured out of me. But in fact, the only imaginative writing I did before I sat down to write my first novel in 1999, was at my Convent school in Lahore. I had to write ‘compositions’ for my English class. I remember writing a story of a dream in which my English teacher, whom I disliked, appeared as a lowly fool. Suffice it to say, she was not amused.

After all these years, how has your craft evolved and how would you define your relationship with writing now?
Writing novels is a long, often painful process, fraught with self doubt and loneliness. But when it is going well, it is the best feeling in the world and I wouldn’t exchange it for any other job. And to be honest, it’s got easier over the years as I’ve grown in confidence and learnt to trust my own instincts.

What inspired The Impeccable Integrity of Ruby R.?
The idea first came to me when I read about Harvey Weinstein’s history of sexual abuse and I thought ‘how would such a scandal unfold in the Subcontinent?’ And the first thing that came to my mind after that initial thought was Bill Clinton’s affair with Monica Lewinsky. I used that as a rough template, if you will, to address other recent trends that trouble me such as the dangerous lure of populism, the cult of celebrity in South Asia, toxic masculinity and an unstoppable tide of online abuse.

Could you give us an insight into your creative process as a writer, especially when employing satire and finding or constructing your protagonist Ruby?
There are some writers who plan ahead. They make a clear step-by-step outline of the story they want to tell, how their characters will develop, what challenges they will meet, where the twist will come and how the denouement will be reached. I am not one of them. I make it up as I go along. It’s almost as if I have to write my characters out first to understand their motivations, their fears, their desires, their contradictions. That’s how I eventually figure out what their goals are and how and why they will or will not attain them. Sometimes I have to really struggle to bring them to life and if I don’t succeed I have to kill them off. In an earlier version of this novel Ruby had a gorgeous younger sister who had a rich boyfriend but both seemed anaemic, probably because they were surplus to the story. So after trying for about six months to breathe life into them, I had to discard them and concentrate solely on Ruby.

Were there any challenges you faced while writing this book?
My biggest challenge was an imaginative one. I saw Ruby as a naive but honest and loyal young woman who gets corrupted by her proximity to power. And though she takes some really questionable decisions I did not want her to be judged too harshly. I hoped readers would understand her compulsions and ultimately sympathise with her. I also needed Saif to be likeable and charming and compelling enough for readers to understand why Ruby was swept away by his narrative, while also subtly hinting at his contradictions. It was a difficult balancing act I had to get right for the book to work.

Lastly, how have you been coping with the pandemic and what are you working on next?
Aside from reading and launching my Instagram Live sessions, I’ve been editing this novel for a large part of the lockdown! I’ve also been recording a podcast with critic and editor, Faiza Khan. Called Browned Off, it’s a funny but sharp edged critique of racism in culture. The first season will be launched on 4th January.