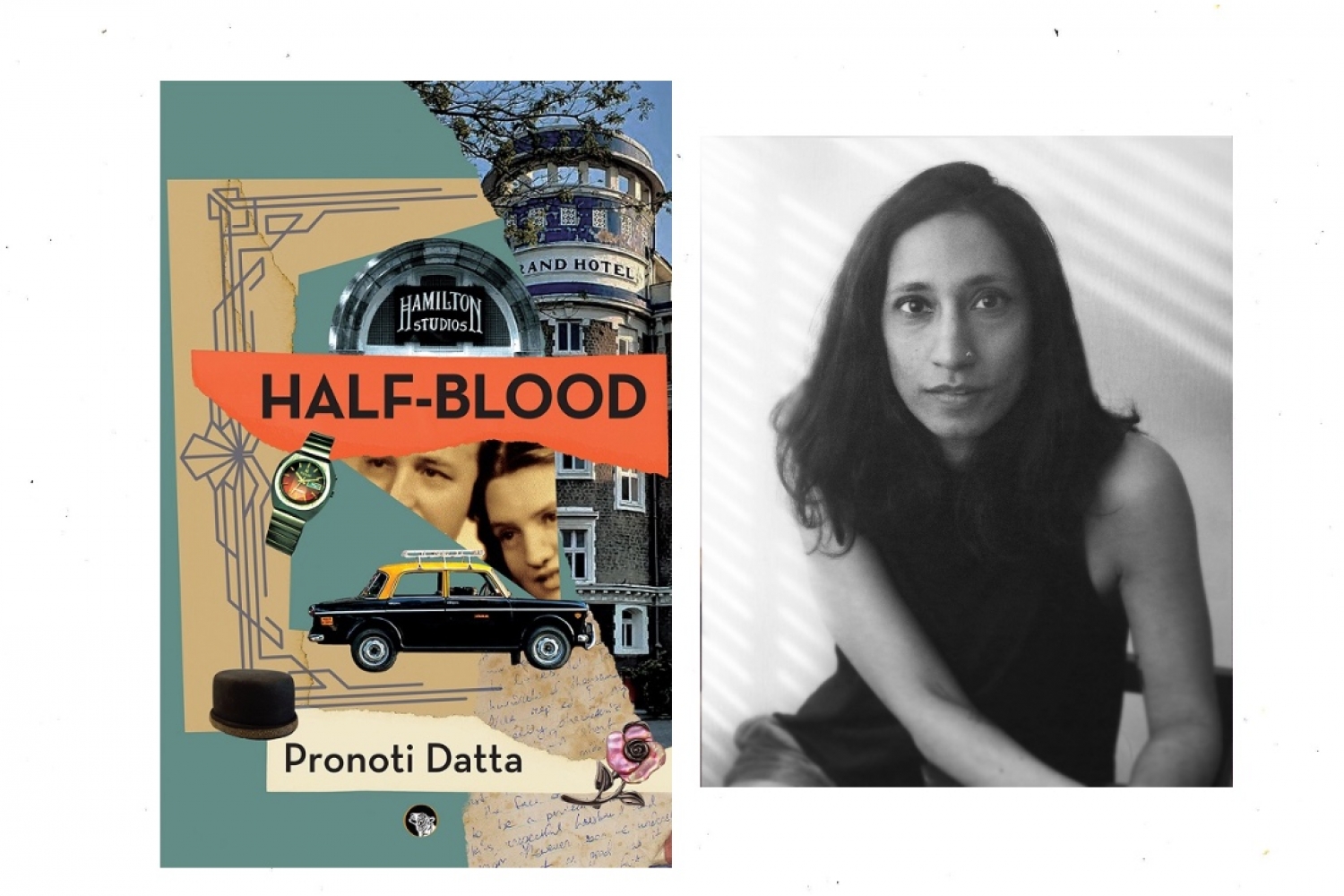 Pronoti Datta’s debut novel, Half Blood, flings the protagonist Maya — a thirty something journalist in Mumbai who’s trying to find meaning in work and her relationships — on a quest to unravel the mystery surrounding her birth. She’s aware that she is the adopted child of the parents she has grown up with, a mismatched Bengali couple. But it takes her around a decade to muster the courage to find the truth about her real parents. Over the course of ensuing chapters, she begins to piece together the extraordinarily eventful life and times of her father Burjor Elavia, a half-blood and ‘a swashbuckling character,’ as Pronoti puts it. She paints a never seen before picture of the Parsi community in this mosaic of a novel which deftly blends the effervescence and eccentricities of its characters with the verve and vitality of Bombay.

A conversation with the author on the creation of this remarkable novel, follows:

How and when did you find yourself immersed in the world of literature?
I have been reading since I was a kid. The earliest books that I really enjoyed reading were from the illustrated Shakespeare series. I never read very sophisticated children's literature but the usual stuff everyone was reading at the time like Malory Towers, Nancy Drew, Hardy Boys. My parents weren’t big readers at all, in fact, they thought I was reading very adult books for my time. I remember reading Gone with the Wind in seventh grade and they didn’t want me reading it then!

What have been some of your greatest literary influences?
There are many, many great literary influences but the first book that truly shook the ground beneath my feet was Crime and Punishment by Dostoevsky. I won it in school. I did well in class tenth. If you got this academic excellence certificate, the school would give you a gift voucher and you could go and redeem it at Crossword Bookstore. The second would be Ludwig Wittgenstein. I did my bachelors in philosophy and his The Philosophical Investigations really moved me and changed the way I thought about language.

More recently, I loved Elena Ferrante’s Neapolitan novels. You might have no connection to Naples, especially Naples in the 50s and 60s, but the granular detail with which she paints that world and describes the inner worlds of her characters is absolutely fantastic. Saul Bellow and Philip Roth have also had a huge influence on me. They have influenced me in two ways: the way they talk about the human condition, human weakness in particular, and the way they write — they're both master stylists. Very often, when I'm writing and want some style inspiration, I'll go back to them. Just the way they string words together is fantastic.

When did you realise you had a story to tell with this novel?
My mother is Parsi and she grew up in Navsari, which is a small town in Gujarat. In the novel, the main character, Burjor, is half Parsi-half tribal and was a part of a historic Navjote in 1942, which is a true event. I remember my mom telling me the story of this Navjote taking place, and of the social worker called Burjorji Bharucha, who is also mentioned in the book. He was instrumental in bringing these half Parsi-half tribal kids into the Zoroastrian fold so that they could access community benefits like education, et cetera. The way she described him, he just seemed like a very charismatic figure; he was very tall, light skinned, light eyed. He was from Bombay but he ran these sewing classes in Navsari for women, so that the women could have a bit of an income of their own. And my mom, as a kid, was sent to these sewing classes. This story was really stuck in my head. And if you know about the Parsi community, the Parsi orthodoxy, you know how important purity of blood is to them. I felt that it was a really audacious thing to do at the time for these social workers to get together and organise this Navjote. So, that was the starting point and I thought I could weave a fiction around this fantastic historical event, of which there is very little written.

What has your writing process been like for this novel?
It's really tough to write when you have a full-time job and I've always had a full time job. So, my creative process has really been trying to find time to write. It has been curtailing my social life, writing on weekends and writing on weekdays when I'm not too exhausted after work. And, I've taken about three writing trips. I've gone to Pondicherry and Goa for a week each time and stayed in one place, my homestay room, and just written. That's the only way you can get the big chunks out, when you’re somewhere quiet and you just have the time to write.

Bombay is much more than a backdrop. How did you go on researching about the city?
I've been a Bombay journalist for thirteen years. Currently, I work at BookMyShow but before, I was a journalist. And, I've always been a city journalist. My first journalism job was with Time Out Mumbai which really got me interested in the life, the cultural matrix and the history of the city. I've drawn on articles that I've written in the past on subjects of local history and on articles that my colleagues have written. So, I've had access to a very wealthy archive. In that sense, it's really been a career-long research project. I've been studying Bombay throughout my career.

How did your own experience of living and working as a journalist in Mumbai help in crafting the character of Maya?
First of all, aside from superficial resemblances, Maya is not me! But working as a journalist helped because I've worked in a newsroom, so I know what that world is like and I understand Maya’s frustration in her workplace. She wants to do quality work but she is hamstrung by her own fears and the newspaper that privileges mediocre work over quality work, which feeds into the feeling of meaninglessness with which she’s beset. So, it ties into the kind of person Maya is and her own quest for meaning.

The characters in your novel are not the stereotypical Parsis, Bengalis and Catholics. How did you bring this cultural nuance and depth in the novel?
In a sense, I have an insider's view because I'm half Bengali and half Parsi, my mother's Parsi and my father was Bengali. I grew up in a semi-conservative Bengali household. In fact, the character of Ratna, barring her physical appearance in the novel, is exactly like this maid we used to have, Bandana. Writing her character was a cathartic experience for me because even though we loved Bandana, she used to drive us mad. I won't say I was writing about specific members of my family, but what I did was I just plucked qualities that I'd seen in members of my family and sort of put them together and moulded characters out of them. The Bengali obsession with food, for example. I took pains to make sure that the characters weren't stereotypical and that they were nuanced, especially the Parsi characters because the book is quite critical of Parsis. I didn't want to be one-sided, which is why you have a range of characters, you have the orthodox guys but you also have the guys who are liberal and who have a critical view. And, again, these are qualities that I've observed in people I know and also in historical figures. This comes from years of reading about the Parsi community and issues related to it.

The ideas of purity of blood, class mobility, confronting one’s past and pluralistic ideas of love are interlaced in the novel. What are some more obscure themes you’d like the readers to engage with?
I hope that I've dented this very widely held notion of the benevolent Parsi. There is this idea of the Parsis as great philanthropists, brilliant businessmen and just all-round amazing people. Yes, they were terrific businessmen, they were incredibly generous with their money, they created incredible institutions. They've been a very small community that has had an oversized role to play in the history of the country. But if you look at the narrative around Parsis, it's all good, which is not true entirely. Parsis are as good or bad as everyone else. If you actually dig a bit into the wider Parsi history, you will find that violence is also part of that history. For example, whole generations of half Parsi-half tribal kids who suffered from the indiscretions of their Parsi fathers. Also, the Parsi businessmen in Gujarat, in the 18th and 19th centuries, have a history of land grabbing, driving the people who worked on their farms and in distilleries to alcoholism and then to debt. They're not universally amazing people, they have a complex history.

What was the inspiration behind Burjor Elavia’s character?
I wanted him to be a part of that historic Navjote, so that I could talk about the half Parsi-half tribal milieu of Gujarat in the 1940s. But because there's very little historic data on that period, I couldn't have situated an entire novel in that milieu. Besides, I was also interested in writing a Bombay novel. So, I had to get him out of there and get him to a place that's familiar to me, which is why he moves to Bombay as a teenager. I also wanted to make him this swashbuckling character, someone who has a lot of adventures and someone, through whom, I could talk about interesting moments in the history of the city. So there’s smuggling and then there’s the Prohibition era. He's a fictional character but he also embodies the daring and the entrepreneurial spirit of the Parsi guys like Jamsetji Tata and Jeejeebhoy, who started from scratch and then went on to build empires. So, I wanted Burjor to have that same spirit which he’s born with and is cultivated in a city like Bombay.

How did the pandemic affect your creative process?
I finished this before the pandemic. During the pandemic, my struggle was to get it published — reaching out to publishers, to agents, not hearing from a lot of people, getting rejected several times. I was actually lucky enough to have someone like Jerry Pinto who introduced me to Speaking Tiger. After that, it was just the process of editing it and revising it with my editor Aruna Ghose.