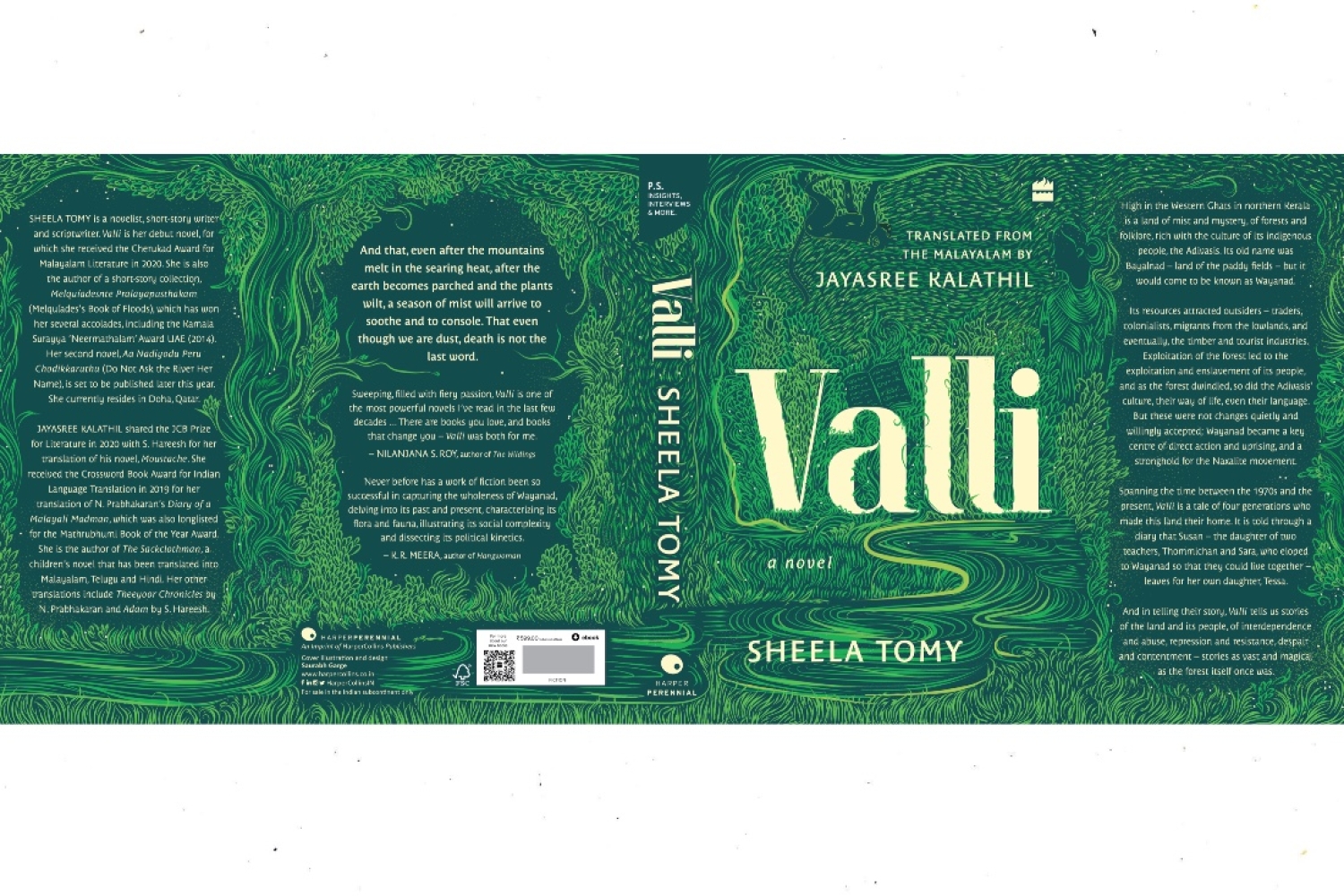 ‘There must come a time when each of us is able to hear the forest weep, a time when the languages of the forest and the humans will become one. When that time comes, human beings will learn to love the earth and one another. In that time, the forest will bloom to the sound of human laughter…’ are words Sheela Tomy quotes from her debut book Valli, when I ask her what she hopes the readers take away from it. Recently translated from Malayalam to English by Jayasree Kalathil, Valli is a deeply personal book for its author, as it is primarily inspired by her roots in Wayanad. Told across many generations, Valli introduces the reader to the mystical land of Wayanad and its beautiful forest, alongside the land’s turbulent history, and the many people who call it home today. Valli is a reminder of the atrocities human beings have committed towards nature, and one another, owing to our greed for resources and power. At the same time, it is a prayer, as Sheela Tomy puts it, filled with hope for change and a better future.

We’re in conversation with the author and translator of the extraordinary book below, to gain more insight into the work.

Why writing?
Since my childhood I loved books. My teachers and parents, who were also school teachers, encouraged me to read all kinds of books, fiction and nonfiction. Somehow I started to write in my lonely times. I used to represent my school and district at the state level for literary competitions.  Enjoying poems since my childhood helped me build vocabulary and imagination. ‘Kumaran Asan’ poems are among my favourites. When I started reading novels, many Malayalam and foreign writers influenced me. Gabriel Garcia Marquez was top among them. But after college days, there was a long gap before I could follow my passion. Only after my children grew up I could pursue my writing seriously.

Writing is a pleasure for me. It is something which makes me feel better. Each creation is a new learning and transformative process for me. Writing is my way of protest and standing for justice. When I write I learn more about myself, my fellow beings and society. I had started with writing poems and short stories during my school days. After moving to the Middle East where radio is a very popular medium, I was involved in script writing for radio dramas and series, and also wrote album songs. But my liking has always been for short stories and novels, especially novels where I get a broader canvas. I assume my style of writing is more suitable for novel.

Why did you choose to locate your debut novel, Valli, in the context of Wayanad?
I was born and raised in a Christian migrant village of Wayanad. My home was by the bank of the Kabani River, near the forest. Kalluvayal in Valli is my own village — a land of paddy fields, coffee, black pepper and ginger, and an abode of myths and folklore. I grew up listening to the music of the forest and stories about the fights for survival of my ancestors. My childhood witnessed all the miseries of Wayanadan farming life. Valli is a natural reflection of all this. Old memories took shape into characters when I began to write. The main characters in the novel are migrants from Thiruvithamkur who came to Wayanad. Valli begins on a February morning in 1970, on the day Comrade Varghese was shot dead, as Thommichan and Sara, newly appointed teachers, arrive in Kalluvayal. While narrating the story of four generations, their love, hope and resistance, it turned out to be the story of the land and a requiem for the forest. The forest became a main character unknowingly.

I wanted to dedicate my first novel to my land, my people and their untold stories. ‘Every land has darkness brighter than light, realities of those who cannot speak,’ as Valli says. Wayanad has a distinct cultural history and geography. It was a land rich in biodiversity. It was a land that belonged to indigenous tribes, the Adivasis. If the aboriginal people and migrants used nature for survival, the encroachments of the corporates are the real threats for environment today. Even while I am writing this I can hear the news of landslides from Western Ghats in ‘Karkkidakam’ rains. I wanted to reflect on the transformation of my land over the last five decades by human greed to a land of lost biodiversity. I wanted to show that the Adivasi people, who once fought for valli (wages), are still fighting for valli (earth), and farmers are still on the brink of suicide.

What did your writing process entail?
Writing Valli made me more aware of the politics of land and labour. Before beginning to write Valli, I did a lot of research about the land and its people. My journeys to research this novel brought about changes in my own outlook and awareness. I spoke to elders, went into Adivasi settlements to understand their lives, worrying about how much justice my words could do to them. I read other books written about Wayanad. My preparations took me even to Unniyachi, the devadasi from the Champu poetry in the twelfth century. I reinvented many of those stories and myths.

As the story of Valli takes place in a Christian migrant village, dialect of the Christian communities is employed and Bible verses are largely adapted. I developed the story through entries in a diary which a mother left for her daughter. I have employed many narrative devices — letters, folk songs, Bible quotations and popular film songs of the time.

Tell us about the challenges that came your way?
There were plenty of characters pushing around me. ‘Tell them about me, tell them about me,’ people and land from past and present said. It was a challenge to accommodate them all. The land’s population is a mixture of people who migrated from different parts of Kerala, the old land owner families and the Adivasis. Representing all of them in the novel was a tedious task.

Secondly, Wayanad is a land of myths and folklore. I wished to reinvent them and adapt them into my story. The process of adding them in the context without affecting the story flow was a challenge. Thirdly, the Paniya language, which has no script and many folk songs, so picking through their rituals, myths and cultures, their songs of harvest and of death, all demanded a lot of research. I did it with the kind support of an expert in Paniya language, Saritha Chandran, from my place.

What do you hope the readers take away from this story?
Writing Valli was a prayer for me, perhaps a prayer for my land. There is a hope that a time may come when the people who were the rightful keepers of that land will own their land, the farmers will not opt for suicide and that the Governments will provide them with rightful means to sustain farming and living. I hope readers enjoy the river of love and hope which flows through Valli. I don’t have a delusion that we can make sudden changes, but I hope to light the way for any unexpected traveller who stalls through darkness at some point of time. That is all my words are meant to be.

It is wonderful to connect with you again about another great translation. Could you tell me if you have a process for choosing the the work you translate and how you were led towards translating Valli?
The only real process for choosing the work I translate is reading it and liking it as a reader first. Sometimes, editors ask whether I would translate a work – for example, S. Hareesh’s Moustache. There too, I read the book, sometimes twice, before deciding whether or not to translate it. As for Valli, I was not familiar with Sheela Tomy’s work – in fact, this is her first novel. I came across the book as I was browsing in a bookstore in Kozhikode. I read a few pages, bought the book and took it home, and read it in almost one sitting. It was captivating. I had to translate it.

What did your creative process behind translating this book look like?
I don’t always start at the beginning and finish with the end when I begin working on a book. My main aim, other than of course translating the story as faithfully as one can, is to capture something of the author’s voice, turn of phrase, the specificities in their use of language and so on. Because without paying attention to these, if our focus is only on rendering the story from one language to another, every writer, every translation, will read the same. So, I spend some time playing with the text, translating a few favourite passages until I have a sense of the author’s particular style of writing and I feel that the English I use is suitable for their sensibilities. So, the first draft is usually done not necessarily in order. When I work on the second draft, I work from start to finish which also helps me check for consistency in usages, in how characters speak and so on. I also do a lot of reading and research. In the case of Valli, I also had my old photographs of Wayanad plastered all over my workspace in London!

Did your translation process include conversations with the author? If yes, could you give us some insight into them.
Sheela Tomy and I were in touch throughout the process — we are yet to meet in person. I sent her drafts and she commented on them. We discussed some inconsistencies in the text, some edits in the book to make it tighter, iron out some wrinkles as it were. I also discussed with her some decisions about translation. For example, which translation of the Bible to use or how to retain without subsuming into the main text the portions that are in the language of the Paniyas, the largest group of Adivasis in Wayanad. Sheela was very receptive to my ideas and a joy to work with.

Lastly, what do you hope the readers take away from this book?
As I have said in the translator’s introduction to the book, it is possible to read Valli in several different ways. And I am sure that every reader will take away something different from the book. The novel’s primary concern is with the interaction between human beings and nature – the forest, to be precise – and the ramifications of it. It is, in that sense, a topical novel, a cautionary tale. It is a saga of loss and despair, but it is also a story full of resilience and hope. My wish is that readers will take away that message of hope, that love and respect for our natural resources and for one another can still save this, our, earth from imminent disaster. 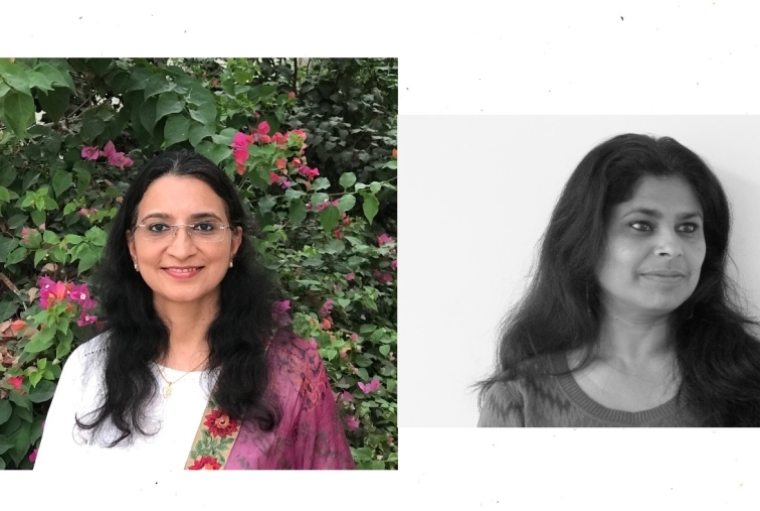