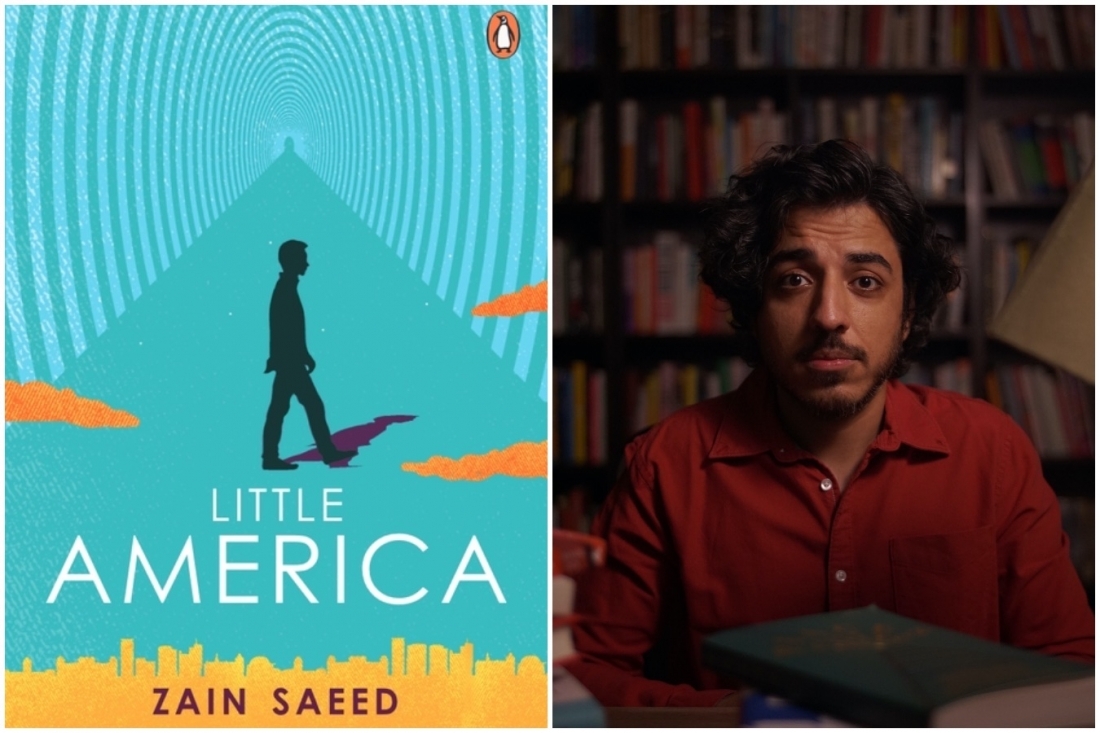 Zain Saeed’s debut book, Little America, is an intriguing investigation into cultural identity formation. The book’s protagonist, Sharif Barkati, dreams of a Little America, a public place in Karachi where there are no socio-cultural restrictions, and after this dream actualises, he finds himself in prison. As he conveys his story to a fiction writer, the reader delves into the heavy and layered psyche of an individual yearning for freedom. The influences of the West take centerstage and important questions regarding belonging and becoming come to fore.

We connected with the author, who lends us some necessary insight into his book below.

The Author
I got my heart broken for the first time in sixth grade, and my immediate reaction to that heartbreak was to imagine a future two decades later where this breaker of hearts would find herself walking through a bookstore and stumble upon a book that I’d written, after which she would proceed to fall irrevocably in love with me. But I’d be uninterested then, just as she was in sixth grade. The book in this story has nothing to do with her. It is simply that. A book. And I suppose that is the real point of this: I have always held books and stories to be powerful, magical entities. I do not know why. But it is this belief that led me to writing, and this penchant for dreaming up stories to counter sadness and every day life that drew me to fiction.

The Influences
The greatest book I’ve read is Dostoevsky’s Crime and Punishment. I read it by pure accident when I was 14, which is definitely not the age to do that (the correct time to read it would be second or third year of college, wrapped in the long-haired-sad-young-man gloom of a college student on probation). It affected me on such a visceral level — I could not read anything for three weeks, and found it impossible to focus on anything else — that I could not help but want to read more of what was out there, outside of Harry Potter. That drive has since drawn me to — off the top of my head — Marquez, Bulgakov, Nabokov, Aleksandar Hemon, Joan Didion, George Saunders, Ron Currie Jr., Jesse Ball, Jenni Fagan, Jesmyn Ward, Saadat Hasan Manto and so, so many others that have collectively formed the consciousness from where I try and derive something to write about.

The Book
My college roommate from Pakistan visited me in Austin during my graduate studies there. We were having lunch at a Panda Express at a mall (which I’ve since been told is by far the most American thing I have been guilty of doing) and discussing issues of love and relationships like we always did, except this time he went ‘I wish someone had told us how to deal with love when we were younger’. That thought led to the creation of the novel’s protagonist, Sharif Barkati, who endeavours to do just that. It was really just that thought, and then I had the novel in a few months.

This book is pretty much a culmination of everything I’ve wanted to say about my culture when it comes to the concept of freedom. Growing up in Pakistan can be a very oppressive experience (and this is me speaking as a man, don’t even get me started on how bad it can be for women, or those who identify outside of the traditional ‘mainstream’ in any way) and all of the questions, the worries, but also the joys, the nostalgia, the longing for the West, the hope — these are all things I’ve felt at some point in time growing up in Karachi. Living in the West for a period of time after such an upbringing really put things into perspective, especially the fact that there really isn’t one way to live, or an objectively ‘better’ way. We’re all just trying to get by. I suppose what I’m saying is that empathy — and not envy, hatred, obsession, indifference — has helped understand the world and people from multiple perspectives, and for that I had to question my own roots. I think I’ve come out of this book a better person.

The Challenges
Getting agents, mentors and readers was pretty simple during my MFA program in Austin. By far the biggest challenge was writing a first draft in the US, and having it be read and workshopped by what was sadly not a very diverse group of people in my program (I do love all of them, and owe them a lot). It should be abundantly clear to anyone from South Asia that we know more about places like the US than they — even the most educated among them — know about us. I kept being asked to ‘explain’ things, and myself, essentially, teach them about what life is like elsewhere, when really all I wanted to say was ‘shouldn’t you already know?’ The requests to explain weren’t so direct, and I wish they had been. They were cloaked in comments like ‘I don’t think this is how it works’ or ‘how can this character be so indifferent to [insert social construct]’. I don’t blame them, of course not — colonization was unfortunately an entirely one-way street (except the Tikka Masala, which has taken over all consciousness in the UK), but that was the first time I saw the fissure in action (Germany was completely oblivious to me too, but for some reason they seemed more prepared to do their research, more curious than certain in what they already knew).

Pakistan and America
I moved back to Karachi about three years ago, and so far it’s been a completely different experience to when I left. The city has changed for the better too, but I think it’s also the fact that I’ve seen what it’s like ‘out there', and come to the conclusion that life is really what you make of it, and the people around you, and if you’re someone who needs people to ‘get’ it, or get you, then the only place that will happen is home. Of course this doesn’t apply to the millions who are unable to choose — I am only speaking of myself. I suppose it would be possible for me to live in the US again if I wasn’t who I am, if I just wanted a job and a family and could exist in that bubble on my own, but I don’t see that happening, at least for now. I have no interest in being a curiosity or a cog, and I want to spend most of my time laughing nonsensically with people who get it, in a place that is familiar.

The Pandemic
How has anyone been coping? Just doing my best to stay out of trouble and away from crowds. It’s been a task and a half coming to terms with mortality and fear and disease and then indifference and understanding and then finally a sense of reprieve after getting vaccinated. I don’t think I’ll be able to think about this time properly till at least a year or two later — at the moment, I’m just winging it. I teach at a university in Karachi, so when I say I had to relearn everything about teaching when we moved online, I am not exaggerating. It’s been a bona fide journey, but one that I wish would end. I don’t enjoy teaching to black boxes on Zoom — it makes life a little gloomier than it needs to be, so I hope we’re back in classrooms sooner rather than later. Also, I wouldn’t mind continuing to wear a mask outside even when all of this is over…my allergies have plummeted since I’ve been masking up — this little piece of cloth has proven a potent weapon against Karachi’s weather.

The Future
I’m writing, so that will continue to happen. I’m working on a couple of new courses I’ve been dying to teach, particularly one on the literature of cities. Both Ahsen (@ahsenali, the person behind the amazing author photo) and I have been involved in developing a new program at Habib University where I teach, so that will take up most of my time. I also play music with a couple of bands, and I’m currently working with one of them (@barfaanireechajao) on a concept album inspired by Little America. There are other random things that I get up to from time to time, so if anyone’s interested in keeping up, or having a conversation about Little America, or just saying hello, I can be found @zainssaeed on Instagram.