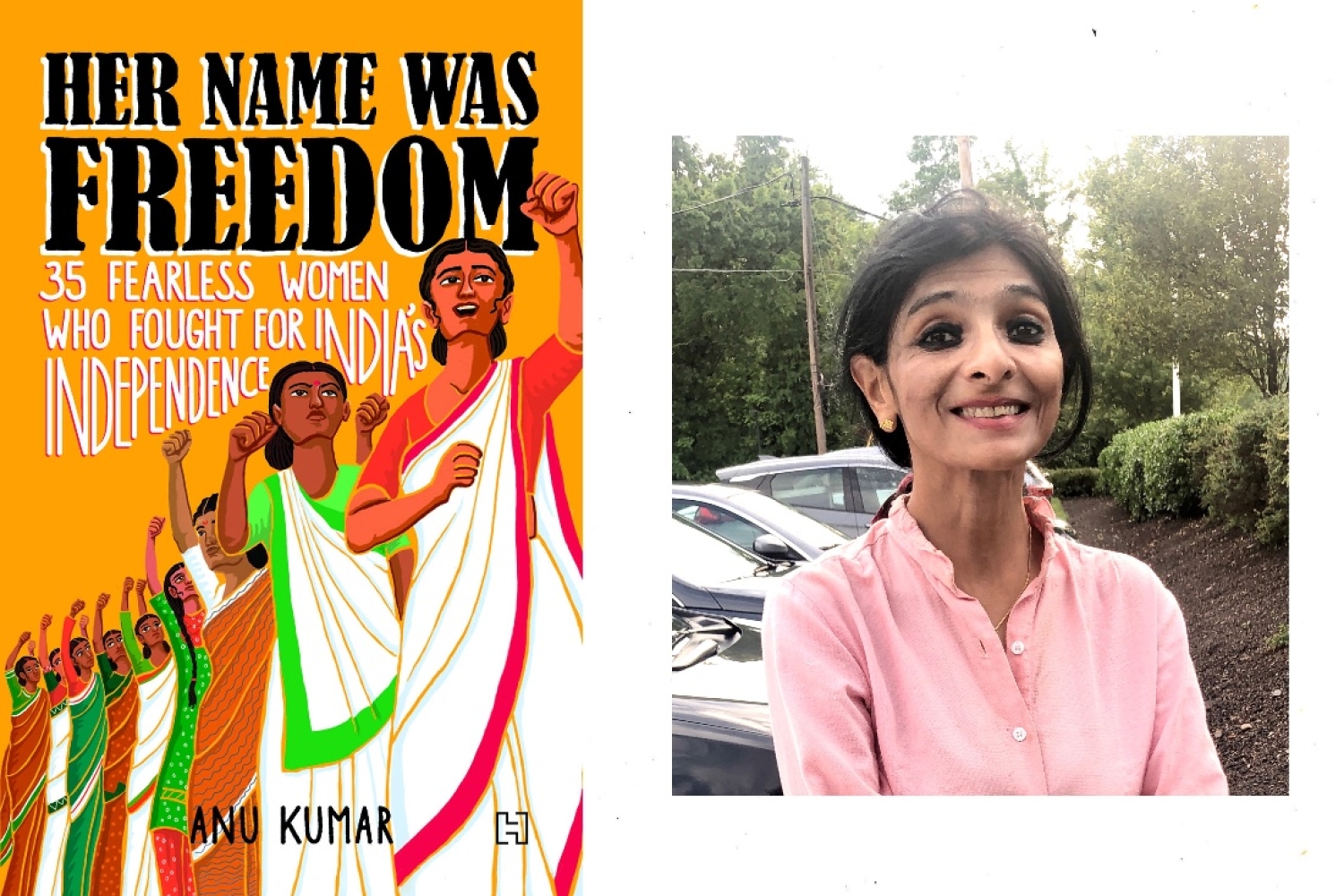 India is joyously seeped in celebrations for its 75th year of Independence. As a nation, this is a time for great pride and retrospection. When we reflect back at the history of our freedom struggle, so many heroic names emerge, who fought for this country’s freedom and future. However, history often ends up neglecting or erasing many critical people involved in its creation. Thus, we have been left unaware of many people, especially women, who were a crucial part of India’s fight for Independence. Consequently and necessarily, Anu Kumar, a well-known writer of history, has put together a book to acquaint us with fascinating women freedom fighters and their incredible stories of courage, through her new book, Her Name Was Freedom.

Below, she tells us more about herself, the book and its creation:

The Writer
I read history at college (LSR) and university, and had truly wonderful teachers. They taught me how to think through issues, to ask questions, to have an imagination, especially in relation to history. Later, after a short-lived, aborted corporate career, I went to work at the Economic and Political Weekly (EPW), a fifty plus year old journal, and that experience enriched to a large extent my understanding of modern Indian history (I hope!). One of my first books, Atisa and the Seven Wonders, was a work of historical fiction featuring a fourteen-year-old time-traveling detective. This was in 2008, and since then there have been several other books, fiction and non-fiction, for younger as well as older readers, including the Emperor books written as Adity Kay, and those like Kings and Queens of India, Across the Seven Seas, books on Gandhi, Chanakya, Naidu and others. I also write history-based essays for Scroll.in. It seems I really am immersed in history and honestly, I do love this.

The Book
My editor, Vatsala Kaul-Banerjee — and I've worked with her on several books (she was my editor for Atisa and the Seven Wonders) — suggested I work on something because it's the 75th year of Independence. And this subject, on the women who were so much a part of the freedom struggle, seemed just right, fascinating, and irresistible. I loved the research it'd all involve, the stories I'd uncover, the lives I'd be part of; it gave me a wonderful way to travel through history via the lives of these amazing women.

The Creation
It involved lots and lots of research, which I absolutely love. Looking up sources, primary and secondary and sinking into them for hours and hours, and then telling the stories of these women in a way to make that period come alive and vivid for a young reader – in essence, working on the book felt like this.

The thing about being immersed in history all through university and later, at least it helps one seek the right sources, one has a sense of where the stories will come from, and then there's this thing called the historical imagination, which helps one perceive things, events, people in context of their times.

It's been like four months or so since the book's completion. And I don’t think I will ever step away or say it's over. These were amazing, fascinating women, and I loved every minute, every second I spent in their company. True, some of them came from privileged families — but each one of them had to struggle, had to find her own footing in a world that was strange, unfamiliar and many a time, hostile to them. It's their courage, their indomitable spirit, persistence that was moving, their far-sightedness was equally amazing, and that they were so deeply immersed in the lives of others, so dedicated to improving the lives of others, especially other women. I am so glad I got to work on this book, to be able to know their stories and have them become part of my life too.

The Challenges
I wanted to read everything possible about all these women, and it was hard to let go at times. And then, in some instances, the sources were hard to come by, I mean the detailed enriching information besides just the standard matter that you find merely on a Google search.  For example, with someone like Annie Mascarene, or Rani Abbaka, Gaidinliu, I wish I could really speak to them to make their stories even more fascinating. And I am sure I was constrained by the fact that I can't speak all the many languages in India, and maybe the regional languages had material that would have made this whole process even more enriching.

To The Readers
I'd like them to know that these women fought the political battles, and also for social reform. Independence, true freedom could come about, these women realised, only when societal conditions for most Indians were made better – such as raising the age of marriage, working for women's education, speaking up against caste oppression. It was never one or the other. Even now, it's much the same thing, the world progresses only when life is made better for every one of us.

The Future
A historical mystery set in 1890s Bombay, and for older readers – isn’t this prdictable?