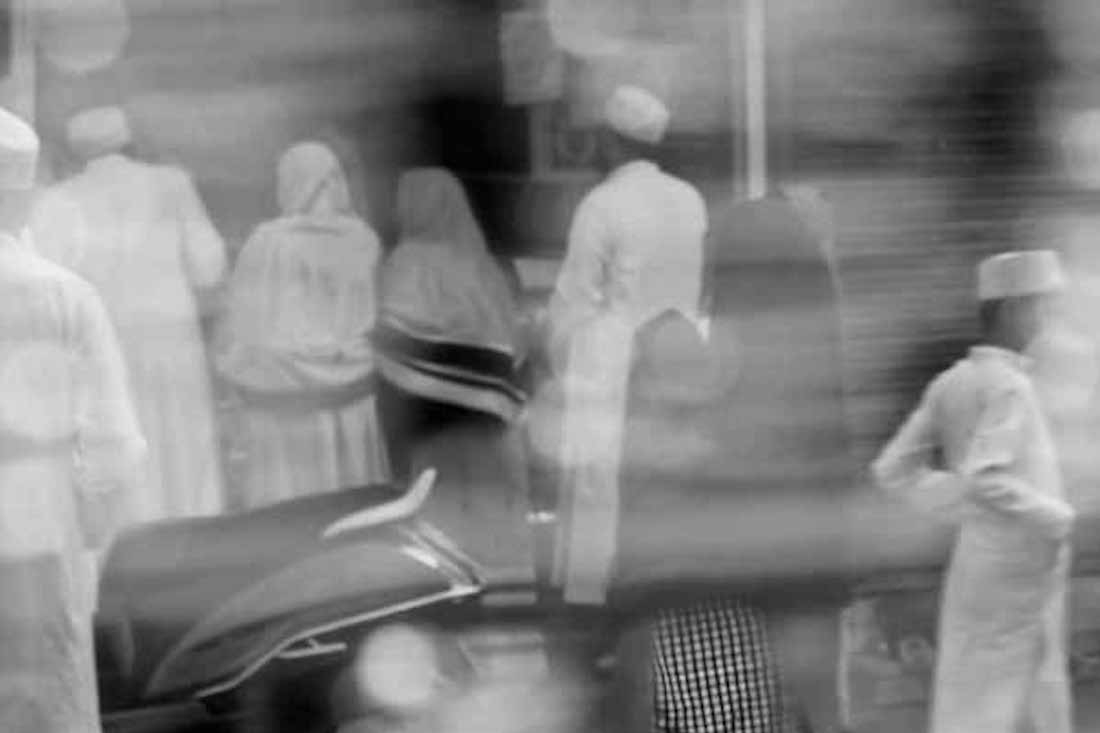 A Pinch Of Skin Priya Goswami

We live in a complex society. a society that is an intricate nexus of religious norms and moral dictates that curtail us. so much so that we are under con- stant pressure to either influence or get influenced by socio-religious beliefs. Shot across five different cities in India, A Pinch of Skin is one such critical documentary that brings to view a community fettered by a religious practice, which lives on in the name of tradition. Directed and conceptualized by Priya Goswami, (a National Award winning director hailing from National Institute of Design), the documentary focuses on the practice of female genital mutilation executed by the muslim women in the Dawoodi Bohra community in india. The practice is thrust upon nai%u0308ve, seven-year-old girls, who neither have the understanding, nor have any stance on the norm. The 27-minute film sees only hand gestures and silhouettes of the women of the community juxtaposing both—the unapologetic voice of the community that prides itself in upholding the ageless tradition with the minority of women who question the practice.

What drew you towards the subject of female genital mutilation?
In college, I had conceptualized a play called, Chakravyu (A circle which cannot be broken) based on the religious marginalization of women; how every religion misappropriated religious texts to subvert the position of women in society. When I read an article on female genital mutilation in India, I thought that this practice was one such example where female sexuality is being contained, checked and curbed in the name of tradition and religion, when no such thing is written in any religious text. Also, marking a 7-year-old with such a painful memory is a violation of human rights according to me. I learnt that this practice is a very secretive one, and I instantly resolved to make a film on this to pursue the possibility of a debate within the community and also so that this taboo practice comes out of its secretive fold.

You’ve particularly withheld from showing faces and have played with silhouettes and hand-gestures to capture the women of the community. How challenging was it to interview the women and encourage them to speak on camera?
A Pinch of Skin is the most daunting project that I have ever undertaken. The biggest challenge in the film was to convince people to speak about the subject, let alone speak on record, on camera. It is a very hushed practice, so much so that in many families that I have come across, sometimes fathers are not even aware about the mutilation of their daughters. The film has been shot in five different cities across the country with no revelation made on the identities of the subjects. I remember once having to travel all the way to one city from another to speak to someone, only to realize that she was unwilling to give me information on camera. So I could only get her voice. But every voice and opinion counted towards bringing together thoughts on this secretive practice. Therefore, I decided to adopt an approach of accepting anything that the interviewee was offering. Even if it were an audio interview, hand gestures or allowing me to shoot the silhouette, I decided to incorporate everything to build the narrative, which underscores the gravity of the subject.

Also, one big responsibility that all filmmakers carry on their shoulders is conscientious filmmaking. If by showing faces or revealing identity, these women could have been ostracized, then I felt it was my duty to tread the line mindful of their privacy. It was, at the same time, important to communicate the immediacy of the situation and how sad it is to keep such a practice under wraps. Moreover, as a filmmaker, I felt that the visual language of the film (hand gestures, blank screens, silhouettes) further added to the subject matter by communicating instantly that this a practice which cannot be openly spoken of. 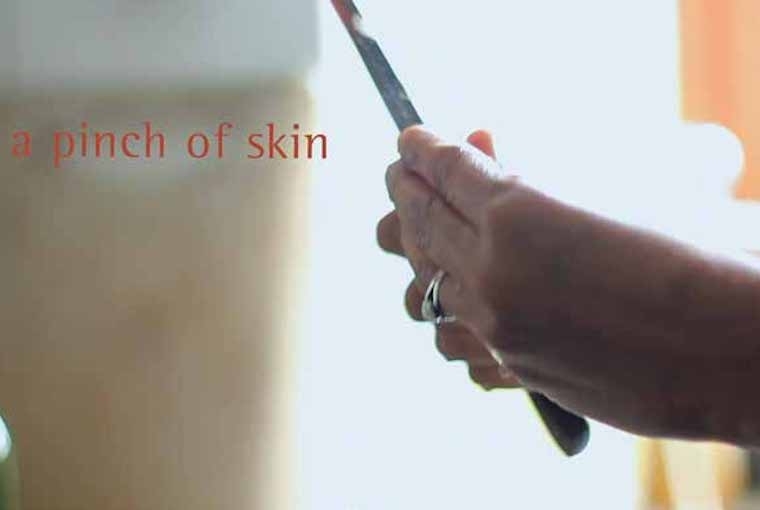 What kind of research went into making A Pinch of Skin?
I was initiated into the subject after I read an article, following which I read a couple more and tracked down the journalist who had written them. The articles provided a lead about whom I could speak to. I was a complete outsider to the community, so it took me a while before I found someone who was willing to speak with me. Thereafter, my research was mainly primary. I compiled the stories from first hand narratives. In the process, I met both men and women, including a famous (now deceased) Bohra Scholar. He was the one to point out that there are no diktats in the Holy Quran to restrict the female sexual experience. Also, I decided to edit out the men’s voices as I felt that women subjecting this on their own daughters further underscores the extent of this patriarchal beliefs and how it has succeeded in brainwashing women.

The film depicts girls being subjugated to this religious practice when they turn seven. What is the significance of this number?
Seven, as they say, is significant so that the girl is old enough to remember that something like female genital mutilation is a part of her tradi- tion, so that she can in turn practice it when her daughter turns seven. At the same time, it’s not so old that the girl may have already attained puberty and the mutilation may put her at risk and cause excessive bleeding or other complications.

Can you share any interesting anecdotes about the process of filming the documentary?
In terms of the subject, I found it pretty incredible when a girl younger than myself (I was 23 then) with an upper middle class upbringing, wholeheartedly believed that the mutilation made sure that she will not be attracted to other boys/men while her friends (from other communities) will be. I found this particularly disturbing. It got me thinking about how cultural conditioning can completely influence one’s style of thinking. Ironically, she told me she wanted to pursue a career in fashion. It is very important to remember that the community is very well educated and financially well to do. Even then, this practice grounds them in a primitive belief that it is important to restrict the female sexual experience. 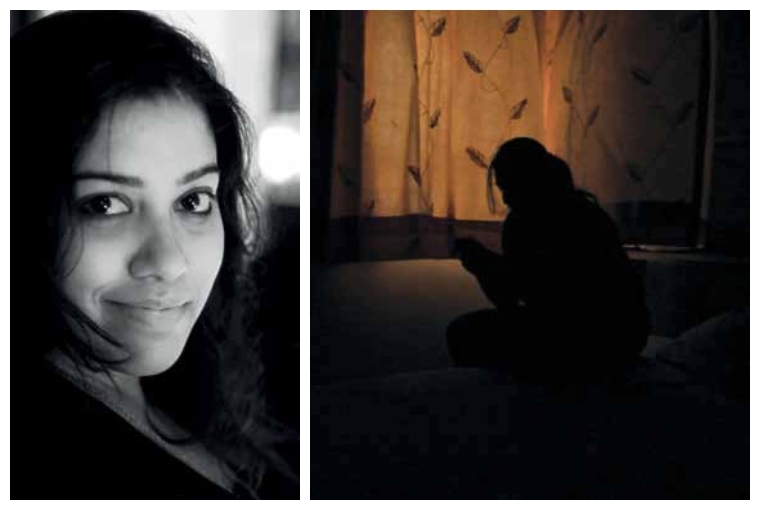 What has the audience’s response been so far? Have you shown this film to the women of the Bohra community?
The film has been received warmly. I have had screenings in many cities where I have shot. It is my wish to be able to hold special screenings for the community. But that is another endeavour as the logistics have to be figured out.

What is it that you are hoping for the audience to take away from the documentary?
This practice is neither about any religion nor is it firmly grounded in one community. The core idea behind this practice is to restrict the female sexual experience. Many religions/communities have done the same, perhaps in milder ways. Through this film I wish for people to introspect about their own lives and question traditions that they follow blindly. I also deeply wish that the people from the community bring out this practice from under the rug and initiate a conversation/ debate and take the first steps to condemn it.

This article initially appeared in our Music issue of 2014 and is a part of our extensive archive.