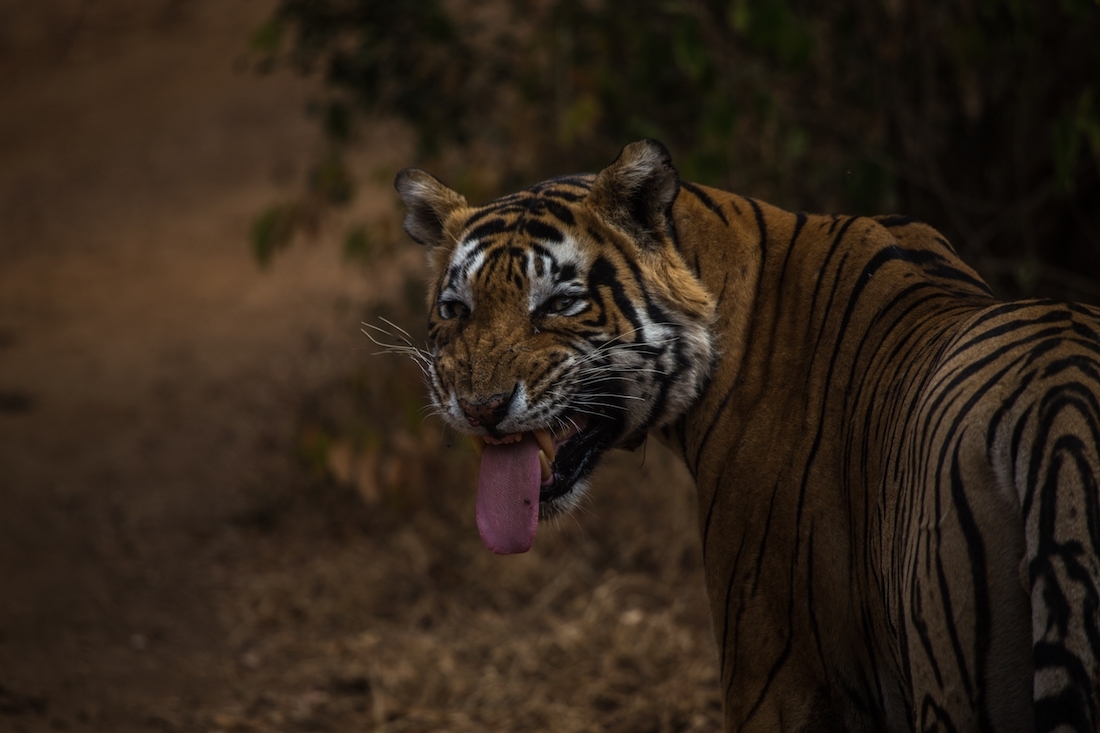 Forester Kiukhenshi Yimchunger stands proudly in front of Japanese cedar trees in Kohima, Nagaland. Many women are part of the team working at the Blyth's Tragopan Conservation and Breeding Centre within the Puliebadze Wildlife Sanctuary. The Blyth's tragopan is a brilliantly plumaged pheasant that is now vulnerable and on the brink of extinction due to hunting and deforestation activities. Its population is distributed in Bhutan, north-east India, Myanmar, Tibet, and China.

Kiukhenshi is one of the many brave souls that live amid the most adverse conditions and tread the densest jungle everyday as part of the ranger’s job— from the mountains to the sea, the desert to the Deccan. The Ranger—that unsung hero and soldier of the country’s wild that preserves and upholds our natural honour and makes sure that our oft-forgotten, sometimes glorified creatures can lead a life of dignity and peace.

An ongoing documentary project led by Pulitzer Travelling Fellow Sonali Prasad, Ranger Ranger documents the lives and complexities of the people protecting India's natural corridors. From the very frontlines of climate change, conflict and poaching, these are witness accounts of how the earth is changing, and why most of it is man-made.

“I knew I wanted to do something different from other vets who were treating domestic animals. I wanted to work with species in the wild.” 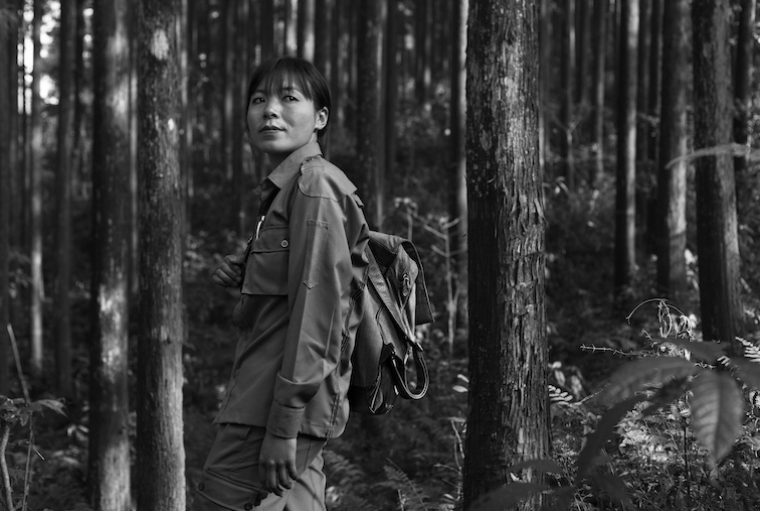 A ranger in Kohima, Nagaland

The series follows and engages foresters into important up close and personal interactions about ‘climate change’, ‘human-animal conflict’ and ‘extinction’—conditions that we only talk of, but conditions that they understand closely as part of their jobs. It also traces the makings of this invisible force. “I knew I wanted to do something different from other vets who were treating domestic animals. I wanted to work with species in the wild,” says Basumatary, for instance, who guards the great rhinos of Kaziranga and knows exactly what goes into the formula milk that must be fed to the baby rhinos. Hukai Zhimo, who is 33  years old but does not look a minute beyond 25, guards Nagaland’s Tokay gecko and has been split between the gecko files, market raids, and a graver investigation involving tiger bones recovered on highway NH-29.

Sukhpali was the first female guard to be recruited on the field in the Sudasari range of Desert National Park (DNP) in 2013. “None of the women wanted to go because they knew they would have to stay in the desert,” she recollects. “Everyone wanted to work in the office or in nurseries. But I decided to take up the role. It wasn’t love at first sight, but now, it is home.” 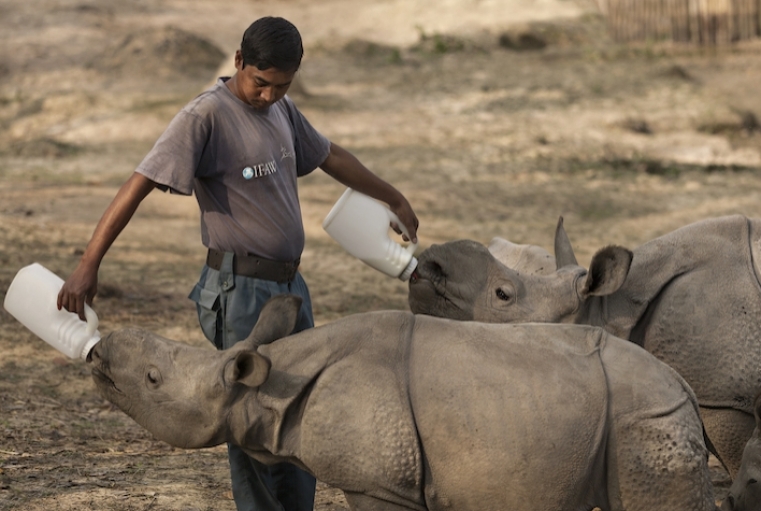 Extending themselves like mycelium, the protectors breed a less popular meaning of survival— collaborating with the protected to co-exist as one neural network in the wilderness. The rangers are not perfect; they are beings motivated not just by fire in their bellies to do good to the earth, but also by the hunger that is fed by the perks of a government job. They falter, have messy file rooms, and sometimes even lack scientific and safety training necessary for the field. Nevertheless, they thrive tenaciously, blending with the resilience of the soil and the sea. No matter what their challenges may be, be it mundane or thrilling—from raising a toddler as a female guard in the scorched barrens of Desert National Park to making sure orphaned baby rhinos poop in time in Kaziranga, they do it all with a smile on their faces.

Others find inspiration for their art—Sanjay Tissu, who is part of the Special Tiger Protection Force along the Pakke river in Arunachal Pradesh, creates artificial beaks that adorn the traditional headgears of the Nyishi tribe — a conservation effort to save the hornbills.

In 2014, India had the highest rate of ranger mortality in the world, according to reports published by the International Ranger Federation. Even in subsequent years, the non-profit’s call of honor is dotted mostly with the khaki of India’s fallen, some engulfed in raging wildfires, others at the gunpoint of ruthless poachers.

“One big challenge I want to point out that these rangers seem across terrains in conflict with village communities living within protected boundaries, or on the fringes and in wildlife corridors.” 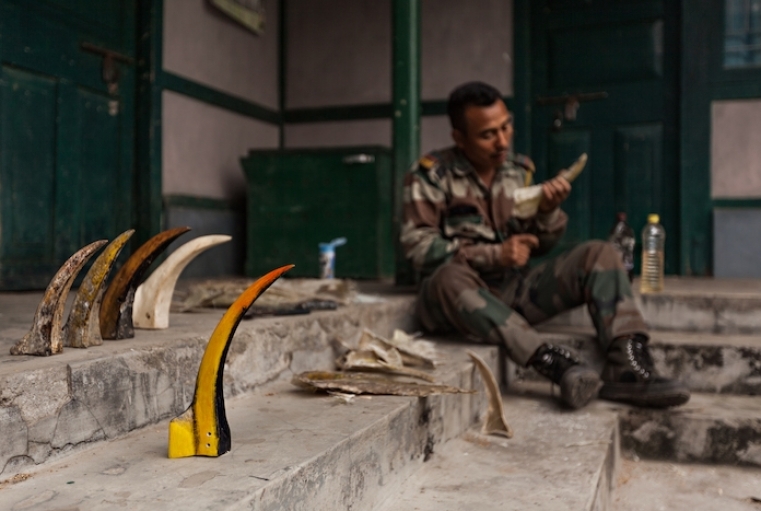 They fight organised crime, battle serpentine cyclones, and temperamental tuskers, confront apathy from communities suspended between the law of the land and the law of the jungle. But most of all, they are strained of basic equipment and resources. “When I asked the tiger trackers what they wanted for Christmas, ‘Just sweaters,’ they said. ‘It gets chilly during night patrols’,” says Sonali Prasad who is behind the project.

“One big challenge I want to point out that these rangers seem across terrains in conflict with village communities living within protected boundaries, or on the fringes and in wildlife corridors. While the guards and keepers follow the law of the jungle, the villagers follow the law of the land. More often than not, there is a very strained relationship between the two parties when it comes to encroachment within breeding sites, right to forest resources, farming, hunting, and infrastructure developments for basic amenities,” she adds.

Ranger Ranger, in creative collaboration with platform mukha.co, has been travelling to different national parks across India since August 2017, such as the Desert National Park, Keoladeo National Park, and Sariska Tiger Reserve in Rajasthan; Pakke Tiger Reserve in Arunachal Pradesh, Kaziranga in Assam and Intangki in Nagaland. Research is ongoing for the Sunderbans Biosphere Reserve in West Bengal, Periyar Tiger Reserve in Kerala, and the Wild Ass Sanctuary in Gujarat. 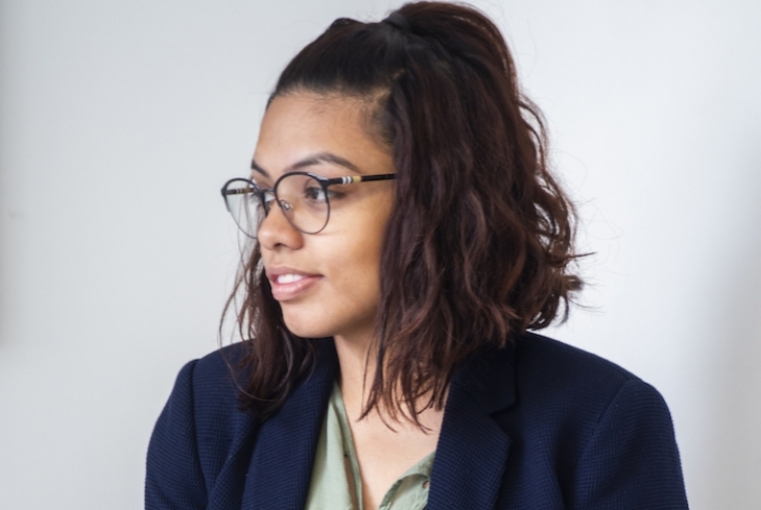 The filmmaker breaks down his process for us as the film becomes India's official entry for the Academy Awards.