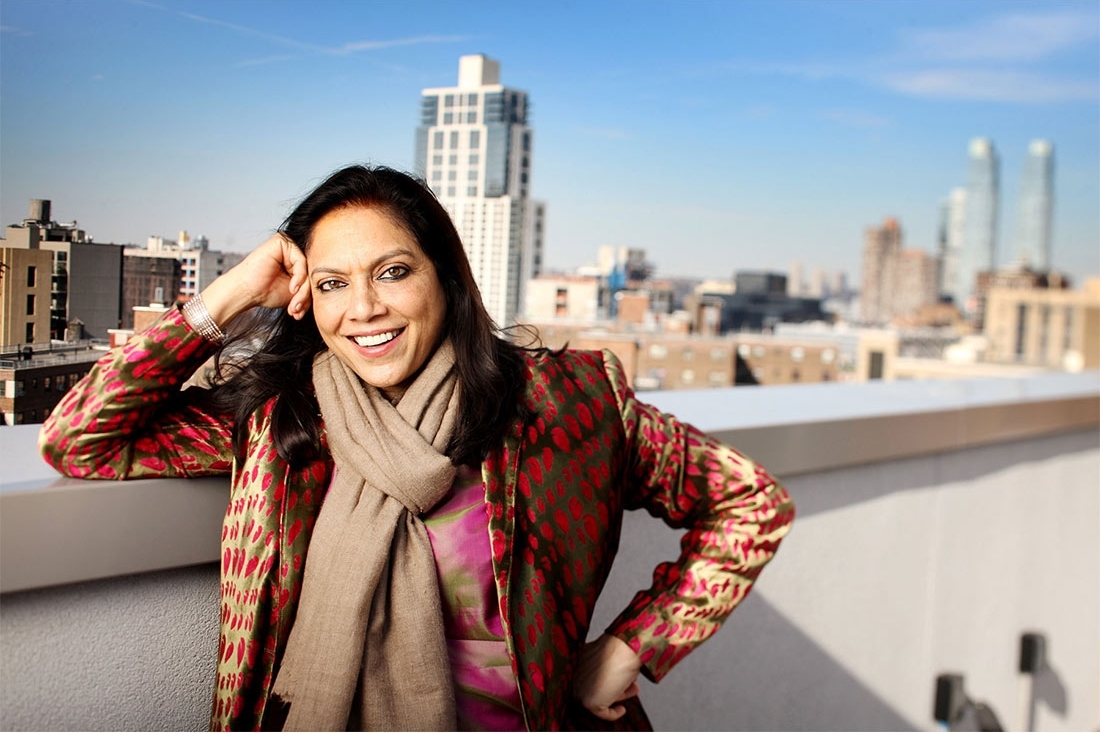 It is a late Monday afternoon when I am invited inside Mira Nair’s residence in New Delhi. Her house has a bewitching aura about it. The space is speckled with quirky little knick-knacks and furniture – a sofa chair patterned with embroidered teacup motifs, an antique pedestal fan in a corner, an unconventional saucer-shaped lamp suspended from the ceiling. Light seeps in through the large French windows as she directs me to her living room. She asks whether I’d be interested in a cup of tea and I sheepishly accept. I have always nurtured a certain image of Mira Nair, similar to the one most of us treasure in our mind spaces about people we idolize. But Mira Nair is that and perhaps much more. What I had imagined to be a no-nonsense, one-on-one Q&A with this multi-award winning cinematic demigod, turned into an intimate affair pickled with laughter and candid gestures, where Mira guided me through her journey as a filmmaker, sometimes leaving me awe-struck with the battles she encountered to become who she is and the cinema she stands to represent today.

‘My father grew up in Lahore and we were raised in modern India, in Orissa. We were Lahoris without realizing it,’ Mira begins reminiscing about her childhood that was nuanced through culture. ‘We spoke Hindustani and recited the poems of Faiz, we heard Iqbal Bano and Noor Jehan almost daily and Begum Akhtar came to stay with us. It was amazing, but we never thought of visiting Lahore, because we couldn’t in those days.’
Gradually, she begins to open the pages of her life. In 2005, Mira was invited to visit the city of her father’s birth for the first time and was engulfed in a deluge of familial get-togethers. The unfamiliar to her, seemed uncannily familiar, but yet unknown. Through the family mehfils, she was introduced to a different portrait of Pakistan – one that was seeped in art, refinement, tehzeeb, music, largess, hospitality and warmth. ‘It was different from the Pakistan we read about in the newspapers and I felt that I had to do something about contemporary Pakistan.’
A few years later she came across Mohsin Hamid’s brilliantly crafted novel, The Reluctant Fundamentalist, and immediately gravitated towards it. ‘It gave me the portrait I was looking for. That was the first impetus that led me to seek this novel out, but what was great about the novel was that it was a dialogue with America. It [depicted] both sides and I also know both sides intimately. As someone who has lived in America for a while, and also is a New Yorker – after 9/11, it was palpably a different city. People like me, who never felt out of place, suddenly were made to feel like the “other”. And one would never hear about the other side there. It was a one-sided demonization that just kept happening, and I felt that if we didn’t tell our own stories, no one else would.’

Interestingly, Mira is no stranger to adaptations. Vanity Fair, The Namesake and The Perez Family all belong to Mira’s curated bookshelf, from which each were characteristically handpicked and translated into visual renditions. ‘Each story culled needs to have an undeniable emotional or inspirational connect’, she points out as she sips her tea. The Namesake for example, stirred a sentimental rumination within. A sense of nostalgia sweeps over her as she rummages through her memory to share her motivation for adapting the story. ‘The Namesake was very different because I was already making a movie, when I had a terrible grief overcome me. I had lost a parent, my mother-in-law, who I was very close to. It was so unexpected and we had to bury her in New York, in a country that was so far away from her home. So I was in this melancholy and I happened to read The Namesake on a plane back to India and I just felt in Jhumpa [Lahiri’s] story that I had found a sister, someone who understood such grief. I dropped everything, including the other movie, and called Jhumpa up and she gave me the book instantly over the phone.’ Vanity Fair, on the other hand, was a project she took under her directorial wing primarily because it was a novel she had relished reading as a teenager. The script had serendipitously stumbled into Mira’s lap as an offer from a Hollywood studio after the success of Monsoon Wedding.

Success, however, was not that easy to come by. She recalls sharing an editing room in New York with her friend and filmmaker, Spike Lee who was working on his debut at the time. ‘He would edit She’s Gotta Have It for the first 12 hours and then I would cut India Cabaret [a documentary on women strippers in India] for the next 12 hours, and that’s how we saved on money.’ It was Salaam Bombay however, her first feature film, shot on the gritty streets of Mumbai that introduced Mira to the world and heralded in a new wave of Indian cinema. She remembers receiving a barrage of phone calls in the middle of the night after the premiere of Salaam Bombay at Cannes. ‘I had never been to a film festival before, and overnight we were the toast of the world because they had never seen a film like this. At the time I was living in some old lady’s corridor in Cannes because I couldn’t afford it. And I had given this poor lady’s number in the catalogue of the festival program because back then there were no cell phones. After the premiere, I staggered back home at 3am and until 7am, the lady’s phone just rang with distributors from all over the world, and there I was, standing in my pajamas attending the calls!’

Salaam Bombay went on to be nominated for an Oscar and was the first feature film to mark Mira’s fascination for marginal characters. Whether it is Chaipao, the street kid who delivers chai to a prostitution camp in Salaam Bombay, Gogol who finds himself trapped in cultural ambivalence in The Namesake or the beautiful courtesan, Maya who is a servant girl in Kama Sutra – Mira tends to pick characters from the peripheries of society and places them at the centre in most of her films. ‘I’ve always questioned this idea of the so-called “marginal people”. Who decides marginal for us?’ she asks. ‘I’ve always resisted that box that people put others in. More importantly, whether it’s the strippers in India Cabaret or the street children in Salaam Bombay, or a black person in a white context – I have always been inspired by their sheer resilience, their never-say-die attitude, and their willingness to live life as it’s handed out without having a chip on their shoulder. I get so much strength from people who are considered on the edge. So, it’s not because I’m sorry for them or that I want to put them on pedestal. It’s because it’s their story and the power they have to endure everything with panache is a universal lesson for all of us. It just turns me on.’ This was perhaps her motivation behind recently signing on Disney’sfeature titled, The Queen of Katwe. Based on a true story, the script navigates through the life of Phiona Mutesi, a young girl who was discovered playing three simultaneous games of chess with bottle caps on the street and rose to be crowned as the first female National Junior Chess champion of Uganda.

Mira proceeds to tell me about other things on her plate and talks about her Broadway directorial debut with the theatrical version of Monsoon Wedding, which would be punctuated with Vishal Bhardwaj’s spectacular musical compositions. We end our lovely hour-long conversation with me wishing her luck for the Indian release of The Reluctant Fundamentalist. Before stepping out, I haphazardly slip in one last question wondering what she’d want her audience to take away from the film. ‘I would love it if people, once they have seen the film, reflect on their place in the world. And try to ponder on this thought – does it matter where we live? Where does one belong ultimately? It is to question the so-called truth that is being handed out to us.’


Our conversation with Mira Nair was first published in our Literature Issue of 2013. This article is a part of Throwback Thursday series where we take you back in time with our substantial article archive.

All you need to know about Siddharth Chauhan’s film that has made it to the Bafta Qualifying Film Festival from India.