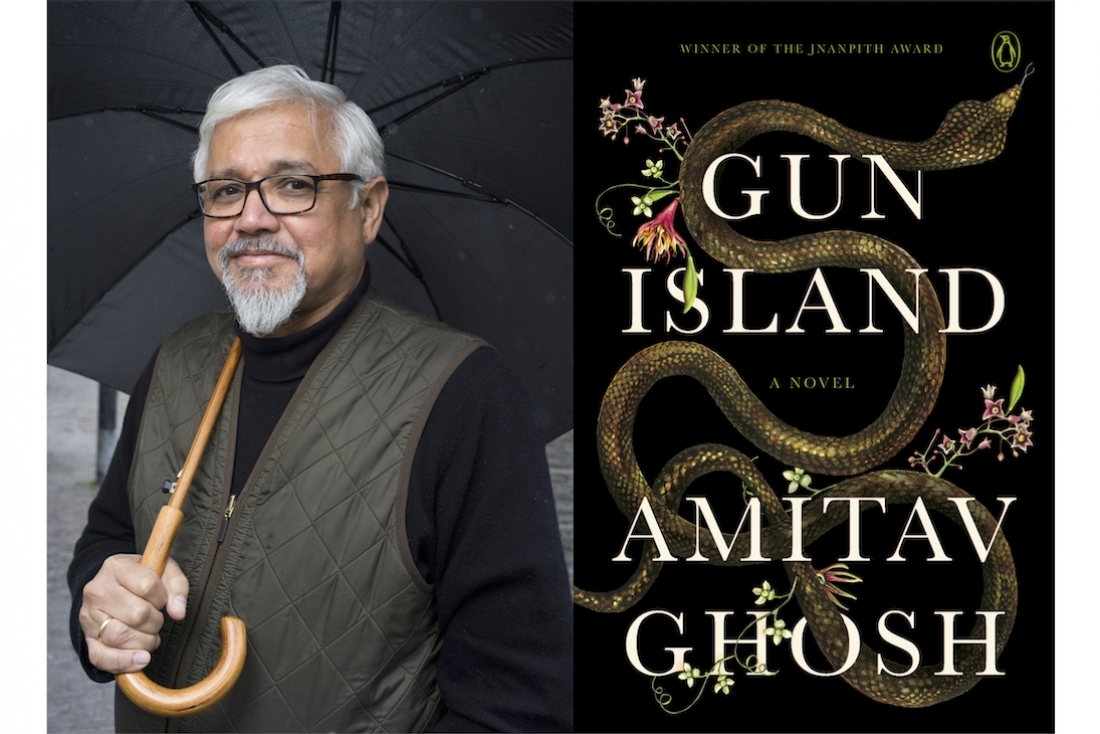 It is impossible to describe the brilliance that is Amitav Ghosh. The winner of the 54th Jnanpith award, Ghosh's mastery over storytelling is surpassed by none. His fiction, from The Shadow Lines to the Ibis Trilogy, has garnered immense critical acclaim, making him a true literay icon of our times. Even his non-fiction, The Great Derangement, delved into issues so necessary that his work has become a rather significant contribution in the discussion about climate change. Yet, Ghosh decided to return to fiction with his recently released book, Gun Island, and has managed to, yet again, elevate his craft to the realm of the extraordinary.

Gun Island is a paramount piece of fiction that spans across time and space and addresses some of the most pressing issues of our time. From migration to myth, the book explores important themes and paints a picture of the brutal reality that the human kind has created for itself. Quite masterfully, Ghosh also does that which is unique to this work as he dismantles the binary between the human and non-human, giving voice to the latter. In its almost breathless examination of the denial that humanity is in regarding issues like climate change, Ghosh pushes these issues back into the spotlight, popping the bubble of collective amnesia that we've managed to build around ourselves.

We had the honour to speak to the author at length about his storytelling. Excerpts from our conversation related to his new book Gun Island follow:

What kind of writing has influenced your work?
In relation to this book, I would say there are two or three writers I thought about a lot. One is John Steinbeck and his book, the Grapes of Roth. Another is Tayeb Salih. You He wrote a wonderful book called Season of Migration to the North which I read in Arabic.

But I must say for this book the writers who were very important for me were certain pre-modern Bengali poets that you won't have heard of. Like Shukubi Narayan Dev, Bipradas Pipilai, Kashiram Das. So these are very long, these are very long epic poems, you would call them in a sense devotional literature, but the ones that were really influential for me were the ones that were dedicated to Manasa Devi.

There are so many themes that are at play in Gun Island. What, for you, was the main driving force?
For the last many years, I felt an increasing anxiety and urgency really about what's happening in the world, especially in relation to climate change because, what we are in the midst of is absolutely an emergency. It's a crisis on a scale which is almost unimaginable. Since I have had children I can't help but worry about their future and the world that they are going to face and the world that you are going to face. You just think of you living in Delhi, in this 48 degrees heat. It's unprecedented temperature. Do you know, at this temperature, if you're outside for more than 15 minutes, you risk heat, stroke? It's an unimaginable kind of stress upon the body. Human bodies are really not adapted to these extremes. So there's that and in 2020, they say that we will run out of ground water in so many Indian cities. We already see these incredible water stresses, we see this drought, which is now raging across much of India. Farmers aren't able to plant and at the same time in the U.S. farmers aren't able to plant because of epic floods. I think next year we're going to see a major food crisis. Just think of it, a food crisis plus a water crisis. I mean, you can have a big Toyota, but if you don't have food and water the Toyota's is of no use.

“I'm not a writer writing a book in order to make propaganda but I do think that I myself have a fundamental commitment to reflecting the reality that I see. That's really what motivates me. I want to be able to reflect in some truthful way the world I see.”

We’ve also squandered our resources. In Saudi Arabia for years they were just pumping up fossil water from the aquifers and that water takes hundreds of thousands of years to replace. Our Upper Ganga Aquifer which essentially feeds something like three, 400 billion people in India as well as in Pakistan is almost out. It's almost completely depleted and once the upper Ganga Aquifer is exhausted you'll see a collapse of agriculture across Northern India. These are questions that are so pressing, so urgent, and yet, you know, when you have this whole spectacle of an election of politics, none of it matters. None of it ever seems to figure. Now if you ask me that where everything has failed, can literature succeed? I don't think so. I really don’t. And you know, that's in a sense, not the point. I mean, I'm not a writer writing a book in order to make propaganda but I do think that I myself have a fundamental commitment to reflecting the reality that I see. That's really what motivates me. I want to be able to reflect in some truthful way the world I see. It's out of that urgency that The Great Derangement arose and this book arose and not that this book is directly addressing any of those problems, but you know, something happens in your imagination, at several removes from the knee-jerk, where something interesting happens.

Migration also takes centerstage in this book. What led you to explore this theme and and what kind of research did you do regarding migration?
Migration is a very important issue in the world today. You can see that it's completely overturned the politics of Europe, the politics of the United Kingdom, the politics of the United States, and it's had a huge impact also on our politics. There's the whole discourse around migration, which is kind of inflammatory and it's had a huge impact. So especially someone like me who spent a long time traveling, et cetera, of course it interests me. It's kind of mesmerizing really. During the sort of what they call the refugee crisis or migration crisis of the last few years, I became really very interested in this phenomenon of people crossing the Mediterranean, in those boats. When I looked at the pictures, I noticed something that really startled me, which is that a lot of the people who are crossing the Mediterranean are actually South Asians, they're from, they're from our part of the world. So I began to ask myself, who are these people? Why are they doing this? And I realized I didn't have the answer. I didn't know. And when I looked at the newspaper coverage, I didn't find the answers satisfactory. I felt that they were inadequate. They didn't actually explain to me what was going on. So I felt I just have to talk to these people who had made these journeys. So I spent a lot of time, in Italy, traveling to migrant camps. Understanding their whole sort of process of processing migrants. I talked to NGOs and all these people, and it was really revelatory. It was really completely revelatory. One of the most astonishing things is that in many months, now one of the largest groups of arrivals n Italy across the Mediterranean is Bangladeshis. So it is an extraordinary thing.

There is a very intriguing aspect of the book which is that the binary between the human and the non-human sort of collapses. How challenging was that, to give the non-human a voice?
I'm so happy to hear you say that because that, that was certainly something that I was trying to achieve whether one can actually achieve it or not. I think this is the fundamentally literary challenge of our time, how do you give voice to the non human. In silencing those voices is how we have created the catastrophe we are in. We think that only we matter, and everything else is really nothing. You see that so much in poetry. Like in Tennyson, and its interesting because the only poet I was made memorise at school was strangely Tennyson. He's from that late Victorian period and he's very influenced by science. At one point, it's one of the verses in his long poem called In Memoriam where he says the tiger must die and the ape must wither, for a man to achieve his full potential. So can you imagine the sort of violence that's implied in that? I mean, these people really thought that you have to just wipe out all of the creatures in order for man to become like God. I mean, that's kind of such a horrifying thing. This thought would be so utterly abhorring to the pre-modern Bengali poets I was talking about earlier.